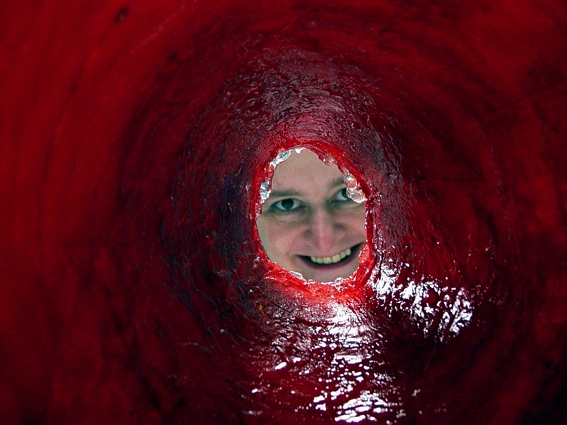 When director Steven Hore was handed £5,000 and an open brief to create a film as part of the rebranding strategy of production company BDA, he took the company literally with his 67 second long adult birth scenario in Push. “BDA was going through a transition (or rebirth) and was keen to dramatize how it had matured and grown. The idea of showing an adult birth was a pretty clear fit for me.”

With very little in the way of prep time, Hore quickly got staff effects designer Rob Thomas of Artem on board to build a prop bed after remembering a documentary on Aliens that described the use of a false floor for the scene in which android Bishop is torn in half. This gave the production the flexibility required without having to rely solely FX shots. Several other ingenious in camera effects were developed, including a disturbing latex love tunnel and an umbilical cord made from painted bubble wrap. Hore decided early in the production to use a harsh overhead lighting rig that would allow the use of two handheld PD150s without the concern of where camera op shadows were falling. The choice of a two camera shoot was a combination of freeing up opportunities to maximize coverage during the limited shoot time, as well as finding ways to grab weird and interesting angles while covering the action in master shots. Although initial concerns were for the makeup and sheet continuity, the main problem on the day came from trying to keep the naked actor warm and minimizing the amount of time he was in the buff.

After Effects was used for the grade, which combined with the lighting of DoP Karl Watkins, pushed the DV format to the edges of its capabilities. Audio was created from scratch in Pro Tools due to the syncing problems of matching numerous fast cuts of the mother screaming with the other sound design elements.

Hore is currently working on various projects for BDA, but also has plans to complete another short within the next year.