DN097: Inside the Circle – Marcy Garriott 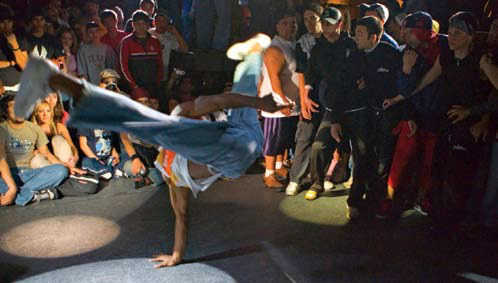 It’s not often I experience the films we feature in their full cinematic glory, and even rarer that I also get face to face time with the directors, but of the many films we’ve covered on the show Marcy Garriott’s feature documentary Inside the Circle – which opens a window into B-Boy culture, friendship and the challenges of growing up and finding your place in the world – definitely warranted the big screen experience. Marcy took some time out from promotion duties to discuss her approach to filmmaking.

Capturing the raw power of a grassroots hip-hop movement, the award-winning documentary Inside the Circle tells the stories of strikingly talented b-boys Josh and Omar, former best friends who become rivals when they join competing dance crews. Immersed in the b-boy culture of defiant creativity, Omar rises to international renown, while Josh tangles with the law. Both of them struggle to keep dance at the center of their lives, and the “B-Boy City” competitive events thrown by visionary street dancer Romeo Navarro serve as emotional milestones in their journey to adulthood. Facing off in intense dance battles that mirror the larger events in their lives, Josh and Omar seek respect, meaning and identity “inside the circle.”