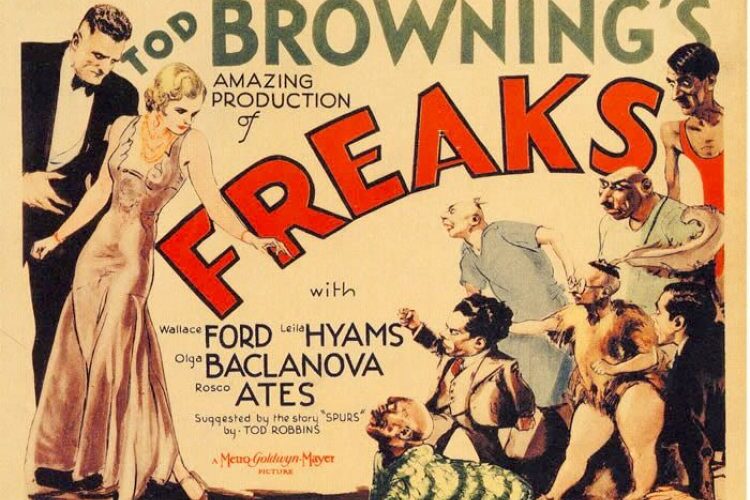 A Human Sausage, a Human Torso, and Maybe Myself

Airports are meant to be transitory spaces; they are bleak and filled with transitory merchandise. At least, they should be, unless you’ve made a really stupid decision and bought a ticket with an 8-hour layover at a deserted airport in Nyköping (pronounced, for better or for worse, Nish-ping), Sweden. Stay in an airport for more than a half-hour, and you’ll surely start to contemplate the place you’re leaving, along with everything you did and didn’t do in that place. Missed opportunity and the nagging reminder of your personality flaws become ridiculed by tabloids, by chewing-gum, by Dan Brown.

During my 8 hour layover, lacking an episode of Seinfeld, 30 Rock, or Six Feet Under, I found myself stuck in a strange predicament: the only thing I had available to watch on my computer was Freaks.

Freaks, for those who don’t know it, was a B-rate horror movie released in 1932 by director Tod Browning – a former circus member – which eventually gained major cult status for its usage of actors with actual deformities in lieu of makeup and prosthetics (though the end, which involves a very unconvincing miniaturized chicken woman, is an exception). It is considered a horror movie, a cautionary tale, an outcast’s manifesto, etc. Despite its reputation as a benevolent, near-moralizing portrayal, the very fact that it is a horror movie implies that there is, indeed, a horrific aspect, and these actors, despite directorial attempts at humanization, have become a grimace mechanism for Smirnoff-ice sloshed tweens at Halloween slumber parties. Of course, the “horror” factor can only come from the monstrous excess stubs, missing extremities, or shrunken heads of the lead actors, and the genre of the film has become the unintended antithesis of the movie’s “inner-beauty prevails” message.

Sitting in the middle of the terminal, resenting the people around me for their good spirit and composure, enveloped in the clouds of insomnia and a hideous, white, fur collared, pizza-stained North Face hoodie/jacket/dress/spacesuit, I couldn’t feel more like a drunken tween at a slumber party. The freaks horrified me. The travelers disgusted me. The nylon on my friend’s – I repeat, my friend’s – North Face was liquefying against my skin. Engines roared and snow churned outside. Nobody sat next to me at the terminal. I smelled like a pizza, a tween, a freak.

I watched the movie – its grainy, high contrast black and white clashing with the florescent lighting and steaming micro-waved sausages in my general vicinity – wondering why I found myself here, in this most arbitrary of airports, salivating over the atrocity of it all. The film gave life to dormant airport objects – a sausage I had ordered bore an uncanny resemblance to Prince Randian (a Ringling Brother’s performer known in the film as the Human Torso – his trademark scene is one in which, being a human torso with head, he rolls a cigarette with his tongue, which could, rumor has it, speak 5 languages); likewise, the woman who had handed me my change and my jiggling, fork-speared Prince Randian spoke in the helium soprano of Hans the midget, around whose misguided infatuations the film’s plot centers.

I was made aware of the fact that the films one watches in airports are always tinted with airport-evoked sensations: churning stomach, twisted metal, life gambling, perspiring mass-manufactured cheese products, candy overload, stale pheromones, X-Rays, drug-sniffing-dog-dander – I will forever associate Freaks with these sensations, and vice versa.

I was further awakened to the fact that whatever the emotional state of the airport misanthrope, the film he/she chooses to watch will inevitably seem to pertain. I came to the conclusion that my situation was not all too dissimilar to that of the limbless and vertically challenged actors that have, for nearly a century, been making people say “oh, did you see Freaks?” “yeah, that shit is messed up.  The pinheads, dude, the pinheads!” “Yeah, but you know, it’s such a benevolent portrayal.”  I had just come from an experience couchsurfing with Swedish anarchists who ran an organization advocating turnstile jumping and wore T-shirt variations on “I Heart NY” that read “I Plane NY.”  I’d found these people terrifying and fascinating and movie-worthy. Couchsurfing was made to be a hospitality spreader – a benevolent portrayal, one might say, of universal loneliness and alienation. Bluntly put, a benevolent portrayal of freaks. My view of these people, and surely their view of me (product of sordid capitalism, stagnant writer, activist of apathy), was a definite view of freakification: I hadn’t made any connections along my travels – rather, I had been horrified and I had been entertained. I was leaving Sweden with just a little more horror and entertainment than when I had arrived. It wouldn’t last – photos would outlast the emotions, and the emotions would morph to match the facial expressions in photos; it, like most trips, had provided an instant fulfillment for the absurd oddity I crave. Yes, another vacation was over, and I had exploitatively freakified the entire experience.

I urge anyone and everyone to create – through their putrid cult movie of choice – their own sensation of terror in airports. All the elements are already there; put them to film and allow yourself to create a memory; it’s not a vacation if your gummy airport sausage doesn’t take on all the characteristics of your most benevolently portrayed movie monster.