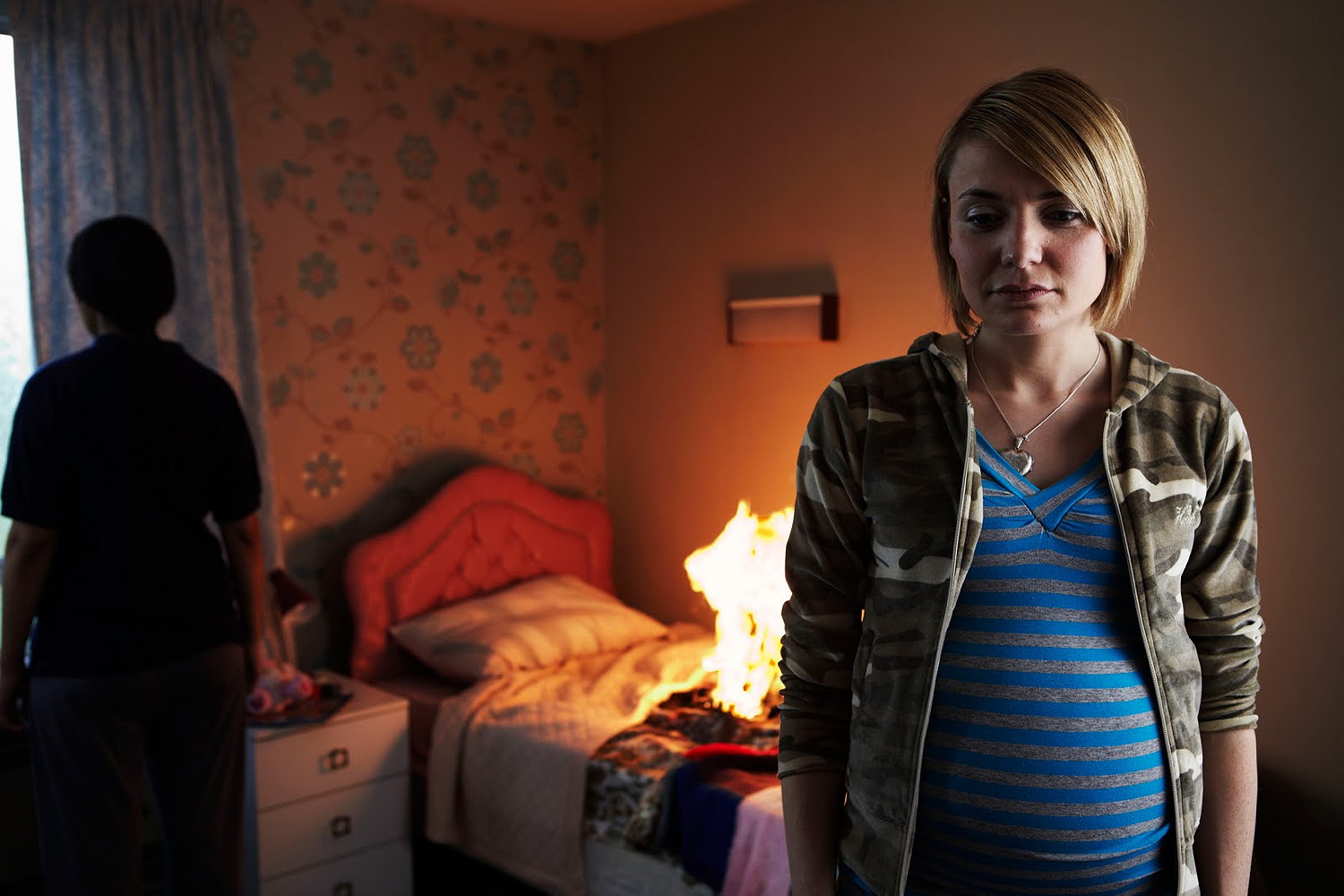 The Arbor is the unique and captivating work of director Clio Barnard, which tells the story of Andrea Dunbar, Bradford born screenwriter who wrote honestly about her life growing up on the Buttershaw estate with acclaimed plays such as The Arbor and  Rita, Sue and Bob Too (which later become a screenplay and successful film). Tragically killed by a suspected brain hemorrhage at the age of 29, she left behind her three children, the oldest being Lorraine, a ten year old who was left with bitter childhood memories of her mother.

The film finds Lorraine in the present day, also at the age of 29 after being excluded from her mother’s family and in prison undergoing rehab, it becomes readily apparent she’s made a lot of mistakes of her own. We watch and listen as Lorraine is reintroduced to her mother’s letters and plays whilst she tells stories of her life both with and without her mother.

A different side of Andrea is presented by her younger daughter Lisa. Perhaps too young to remember some of her mother’s behaviour before she passed, it’s clear she still idolises the late Andrea to this day. Filled with other insights from Dunbar’s family and friends, the film is offset with archive footage and scenes from The Arbor acted out on the Buttershaw estate in front of its current residents. Barnard, also being from Bradford, wanted to return to the estate to see how much it had changed in the two decades since Dunbar’s death.

She cast from nearby school for the parts in The Arbor reconstruction, luckily finding a lot of local talent, particularly Natalie Gavin for her performance as the young girl.  The Buttershaw estate location is clearly crucial to this film and the recreation comes across with great effect. Lorraine never realised just how autobiographical her mother’s plays had been, with The Arbor being very much a story about how she met Lorraine’s father, and the abuse she took off others in the estate for being with a man of Pakistani decent.

The rest of the film focuses on Lorraine, her childhood and life now. The story was constructed by using ninety hours of audio interview footage. The sound edit was completed before there was even a picture to place it on, with the interviews at their disposal, Barnard and her team edited a 90-minute ‘screenplay’. Heavily influenced by the techniques used by the verbatim theatre, in which actors mime over the real voices of others, Barnard applied the same delivery in The Arbor.

Before I saw the film for myself I had my misgivings. I was worried the technique might be distracting, however I quickly forgot about it. All praise goes to the actors for executing their performances to such a high standard, making a genuine connection on screen with the audience.

Manjinder Virk who plays Lorraine has spoken of how she listened to her lines over and over, learning the rhythm, pauses and ‘err’s’ to give the best performance she could. I really couldn’t believe how effective it all appeared on screen; there’s a totally different connection made with the characters than if the whole film been solely recreated by actors.

Documentaries and screenplays are often considered utterly different forms of film, which for obvious reasons can be true, but when stripped to their basic functions they are very much the same. They both tell a story, whether that be fiction or non-fiction. What is always important to remember however is that both forms are constructed stories created by the director who, in the end has final say. The Arbor clearly demonstrates this by combining both genres.

I truly feel this film is something very special. It’s an extremely dramatic and heartbreaking piece of cinema and could very easily have been recreated as purely drama. Instead, Clio Bernard has developed a unique reflection of Lorraine’s life with memorable affect, leading to her deserved win at the Tribecca Film Festival earlier this year for best new documentary filmmaker. Released on October 22nd in cinemas throughout the UK there should be an opportunity to catch The Arbor in the very near future.