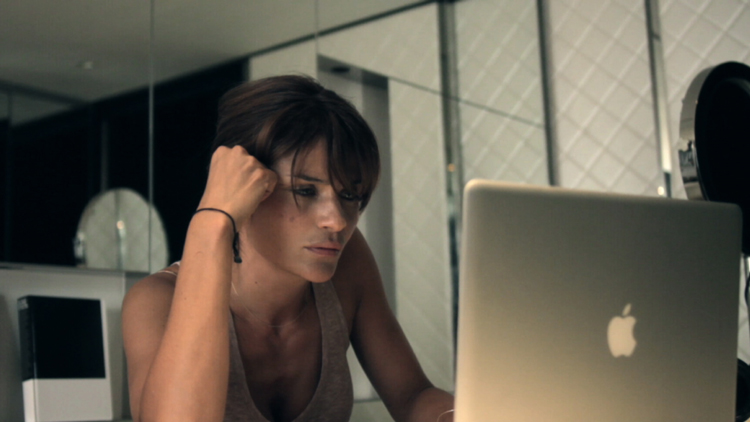 It fills me with a warm glow when companies decide to sidestep their traditional advertising routes or the forced down your throat product placement approach (*cough* I Robot) and instead decide to put their trust in filmmakers and reap the rewards of association. Nespresso did it with Ben Briand’s sumptuous Apricot and earlier this year The Opposite House brought together three of Beijing’s most talented emerging filmmakers to create original short films within the hotel for the Short Stays collection.

Taking a similar approach, W Hotels commissioned Edoardo Ponti to write and direct Away We Stay a film created to celebrate their new London Leicester Square hotel due to be opened Valentines 2011. Away We Stay tells the story of photographer Alex Worthington (Helena Christensen, herself a photographer) who’s become jaded with the falsities of her prepped fashion shoots and while looking to capture something real for a change has a brief encounter with Adam (David Gandy), leading to a will they wont they scenario.

Unlike the aforementioned Short Stays set of films, there’s little to challenge the viewer in Away We Stay; London, Christensen and Gandy all are beautifully captured in full 7D glory, and boy are they beautiful, but the paper thin story, complete with cliff hanger just doesn’t live up to the rich visuals – if you don’t guess the ‘reflection reveal’ a mile off you’re really not trying. On the plus side there’s not a trace of ‘fluffed pillows’ or ‘outstanding service’ in the film. The W Hotel and its views of London does feature, but as a subtle backdrop to Alex’s activities – I have to admit I’d be very interested in spending a few nights there. Despite the flaws, it’s good to see them take a creative approach to promotion and hopefully this won’t be their last foray into the field, I only hope they give the gig to someone who’ll give it a full service next time (sorry!).