An adaptation of an acclaimed and beloved novel by Kazuo Ishiguro, Never Let Me Go paints a conceptually alternative world with a very familiar visual universe. The setting, at least visually, is the countryside in 1990s Britain, yet history is skewed into a parallel universe where clones are brought up from ‘birth’, only to have their lives cut short in order to supply their organs for donation to the humans in need. Kathy, Ruth and Tommy, played by an exceptional cast of young actors, Carey Mulligan, Keira Knightley and Andrew Garfield respectively, are helpless victims of advancements in science, where ethics gradually deteriorate in favour of human evolution. The children are brought up in boarding schools, glorified battery farms, where they are enclosed and kept secret to the eternal possibilities that life offers in their external world.

Yet interestingly, these questions of morality are kept aside, lingering in the background and never too lucid, for the film seems more interested in debates on mortality and identity. Indeed, at its best moments, Never Let Me Go suspends emotions and leaves opinions unspoken, letting the aura conjured to overwhelm the viewer. The cinematography, capturing the lush yet bitter landscape, perfectly fuses with the rhythms of the story that unravels, using the spaces between the characters and the frame to speak volumes. The pace is pitch-perfect, allowing the gradual comprehension for their timed and inescapable demise envelope the characters until they disappear. 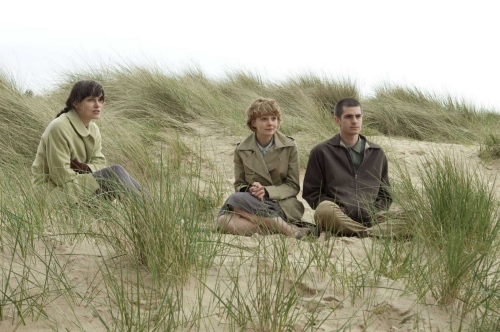 The film is almost too perfect, yet does include its fair share of missteps. Screenwriter of contemporary genre classics 28 Days Later and Sunshine, Alex Garland, decides to reveal too much in its opening moments, evaporating the mystery and intrigue that supposedly pinpointed the mood of the novel. There is no doubt that Garland discussed at length with Ishiguro about the screen adaptation, yet the structural error seems to unnecessarily tilt the story from then on. Although a perfect accompaniment to its narrative, the production of Never Let Me Go merely adds images to text, seemingly forgetting or ignoring the possibilities of the cinematic medium. The text too often invades the subtleties of the imagery in its use of voiceover, though necessarily revealing Kathy’s subjective inner-life, too apparent and crudely simplistic particularly in its finishing moments. Yet Never Let Me Go never explains too much and allows for the mood, unspoken emotions and suppressed desires to determine the flow of its story and it is relieving to see that some mainstream cinema still lets its audiences fill in the gaps.