My best-of-the-year list for DN, alongside my top ten Japanese films of 2010 for Midnight Eye, are my first submissions of best-of lists for any publication. I usually browse the internet at this time of the year, searching for other peoples’ lists to compare with mine, and I always get frustrated that most entries seemed to be for films that had only screened at festivals and had yet to be theatrically released in the UK. That means we can’t compare lists; how dare they! Yet I’m ashamed to admit, I have done exactly what I used to damn those critics for. My list largely comprises films that only screened at festivals; unfortunately, some might never screen in the UK again. But I have come to realize that these lists are for more than just comparing – they also exist so we can recommend each other titles in case we come across them in the near or distant future. So please send me your list and I’ll look out for your recommendations!

10. Vortex – Gytis Luksas
Set in Lithuania under Soviet occupation, Vortex is an adaptation of Viktoras Radzevicius’s 2003 novel, a sombre coming-of-age story of country-boy Juzik who decides to move to the city. This tender portrait of young Juzik and his hardships kept me engaged throughout, despite its lengthy and meandering narrative. The film is moody, depicting the cycle of life as a series of mishaps and repetitions in mourning, a whirlpool that ultimately leads to death, but Juzik manages to keep his head up and takes on everyday. The black and white photography in particular, with the calculated vintage aesthetic, was something that has stuck with me from the screening at the Bradford International Film Festival in March. Despite it being submitted as Lithuania’s entry for the Oscars, the film has been forgotten so its inclusion into my list is my way of showing support.

9. Surviving Life – Jan Svankmajer
Surviving Life is a new feature by surrealist animator Jan Svankmajer and about surrealism’s favourite topic, dreams. A middle-age man, Eugene, attempts to escape from his mundane office life into the inner life of his psyche, where he chases the woman of his dreams, E. The more obsessed he becomes with his dreams, the more consequences he must deal with in his waking life. The cut-out animated photographs and the stop-motion tricks, together with the mixture of animation and live action seen in his previous work such as Alice, result in an excitingly inventive vision that is both hallucinatory and distinctly original. A true legend of the animation genre, Svankmajer has been working in this painstakingly time-consuming method since the 1960s but it seems he has not lost his touch. Though at times the Freudian and Jungian metaphors are too playfully obvious, most notably when the two fight as moving portraits in the therapist’s office, the film is charming and it was exciting to see a new Svankmajer film.

8. Uncle Boonmee Who Can Recall His Past Lives – Apichatpong Weerasethakul
As I mentioned in my review here on DN, I certainly don’t consider Uncle Boonmee to be Weerasethakul’s best work to date. Still, Weerasethakul is simply one of the best contemporary directors in world cinema and Uncle Boonmee is a welcome addition to his oeuvre. His ability to seamlessly conjure a distinctly idiosyncratic world full of bewilderment, together with his natural sense for visual composition and aural environment, makes him one of the stand-out talents of recent years. It’s great to see Weerasethakul finally receive such deservedly high praise this year.

Read the DN review of Uncle Boonmee Who Can Recall His Past Lives.

7. Ruhr – James Benning
Another film I reviewed here on DN, Ruhr is James Benning’s newest feature and his first shot entirely outside of his hometown and shot on digital. The film is the slowest, most meditative on the list, as it comprises only six shots in its entire 2-hour duration. The tableaux and immobile camera captures Germany’s Ruhr region in rigidly calculated and paced compositions, Benning’s characteristic style. The last shot, lasting 60 minutes, is easily the most memorable of the year.

Read the DN review of Ruhr.

6. Coming Attractions – Peter Tscherkassky
The only short film on the list, Peter Tscherkassky’s Coming Attractions is also the most experimental on my list. Tscherkassky himself describes the impetus of making this film, “to bring the three together: commercials, early cinema and avant-garde film” (sixpackfilm), and the film is a collage of different techniques in experimental film, including solarization, optical printing and multiple exposure. The film celebrates the exhibitionism and foregrounded form found in early cinema, identified in Tom Gunning’s Cinema of Attractions that the title extracts its name from. Tscherkassky takes his found footage from an advertising firm and playfully applies this concept– the result is 25 minutes of experimental, enjoyable cinema. 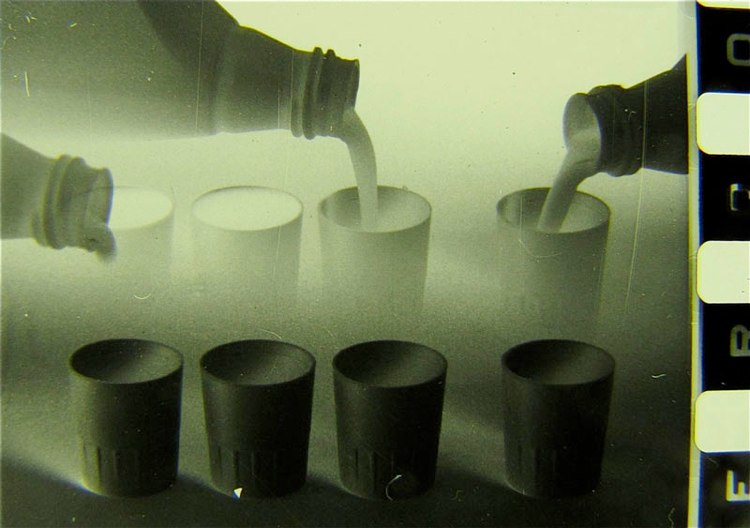 5. Winter’s Bone – Debra Granik
The winner of the Grand Jury Prize at Sundance, Winter’s Bone is a chilling noir-thriller, except we don’t see sharp suits, shadows of city-scapes and dimly lit lampposts. Instead, we have a young teenage Ree Dolly, played with mature conviction by Jennifer Lawrence, who is forced into investigating the whereabouts of her drug-dealing father or else she’ll lose her family’s house. The setting is Missouri, the depths of rural America where all inhabitants seem related and defiantly silent to Ree’s cry for help. The film is a slow-burner but its accented delivery of dialogue is poetic, its sense of impending doom is palpable, its use of music is calculatedly aware and the cinematography is breathtaking. Winter’s Bone is highly recommended.

4. Blue Valentine – Derek Cianfrance
The surprise entry for me, as I hadn’t heard anything about and therefore wasn’t expecting much from Blue Valentine when I saw it at the London Film Festival. Admittedly, I went to see the film because Grizzly Bear took charge of the soundtrack and my friend likes Ryan Gosling and Michelle Williams. The film charts the birth of a relationship between Dean and Cindy and its eventual and seemingly inevitable demise, and is captured in a cleverly composed cross-cutting style. John Cassavetes has been sited as a comparison, for Cianfrance captures the ugliness of human emotion yet simultaneously grasps the compassion of human frailty. The camera lingers after the dialogue comes to a close, only to reveal the expressions crumble into a devastating collapse. The exhaustion of their relationship is so physical and real it deeply affected me and had me thinking for days. I came out of the screening blown away. Blue Valentine has secured a theatrical release in the U.K. in early 2011 – please go see it.

Listen to the DN interview with director Derek Cianfrance.

3. The Illusionist – Sylvain Chomet
Hand-drawn animation from Belleville Rendezvous’ Sylvain Chomet, The Illusionist is a story about a traveling magician finding less and less space to share his magic as he journeys from one mini-theatre to the next. Almost completely silent, only relying on grunts, murmurs and quiet sounds, much like the first half-hour of Wall-E before it cops out, the film manages to communicate deep and heartfelt emotions of melancholy and love. The story was adapted from an unproduced script by Jacques Tati, and the gentle gestures and comedic composure of the Illusionist is reminiscent of Tati himself; the film becomes a requiem to the magic of cinema that was, the animations of yesteryear and the comedies of the past.

2. White Material – Claire Denis
Denis’ latest, after her poetic ode to Yasujiro Ozu in 35 Shots of Rum, is further proof that Denis is one of the greatest filmmakers of our generation. White Material has the same sense of poetic patience in storytelling with an unapologetic urgency in theme that can be found in her debut Chocolat. Staring directly into the troubles that haunt Africa, the film is located in an unidentified space in Africa and the period it is set in is also undisclosed – is it a document of colonial Africa or a meditation on post-colonial guilt? What it is not is a story of a heroic white woman who stands firmly to protect her coffee farm; our protagonist Maria, played by the excellent Isabelle Huppert, is clueless and oblivious to her surroundings that are crumbling amidst civil war. Denis’ film is powerful but is not propaganda, urgent but without an answer, critical but without blame, and physical at the same time as being poetic.

1. Dogtooth – Yorgos Lanthimos
My favourite film of the year is Dogtooth, an utterly bizarre but strangely believable tale about a deranged family that cut themselves off completely from society. The three children have never left the confines of their household, and their unusual home education results in strange idiosyncrasies in their communication system, their linguistic (mis)constructions and general mannerisms. As events unfold, the cracks begin to appear and disrupt the calculated equilibrium, leading towards a disturbing mess of a conclusion. The film is shot with clinical precision, reminiscent of the opening sequences of Lynch’s Blue Velvet where a beautiful façade of American suburbia reveals its ugly truth, the film maintains this undercurrent of eeriness throughout its duration. The most original piece of cinema I’ve seen in a while, Dogtooth cleverly mixes comedy and horror to create something fresh.

Read the DN review of Dogtooth and listen to our interview with director Yorgos Lanthimos.

Other Mentions:
I Wish I Knew – Jia Zhangke: A celebration of Chinese film history.
The Arbor – Clio Barnard: A bold experiment in image over sound and a breath of fresh air for British cinema.
Catfish – Henry Joost & Ariel Schulman: Has a lot more to say than The Social Network and even more for us to talk about.
Still Walking – Hirokazu Koreeda: A moving and realistic portrait of a family reunion. If it wasn’t for the concluding sequence, it would have made it onto my top ten list.
Mother – Bong Joon-ho: Intricate plot patiently executed, amazing cinematography and central performance.