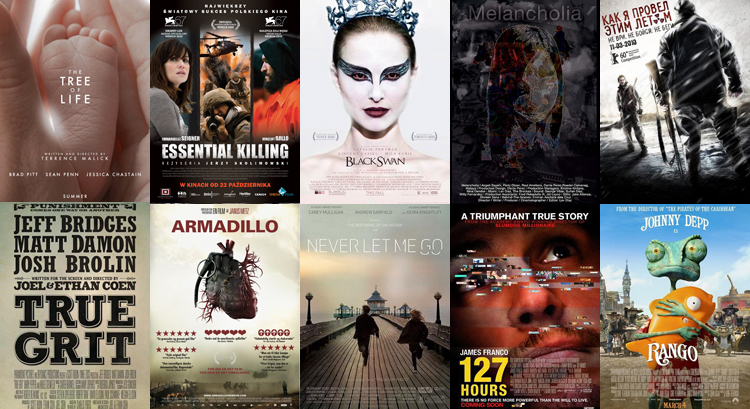 I know what you’re thinking….”haven’t they just done films of 2010?” Well don’t worry, I haven’t made a time machine and I can’t see into the future, this isn’t a list of the best films of 2011, just the ones I most looking forward to. Every year we do a restrospective of the 12 months that have just passed, but we never look into the future with anticipation of what the next 12 months will bring. This is my top ten of films I’m bursting to see in 2011 (I’ve only picked films with trailers currently circulating out there and I’m sure this list will grow and expand throughout the year):

1. The Tree of Life – Terrence Malick
With the films of Terence Malick you can expect fascinating stories, rounded characters and stunning visuals. His captivating films always turn out to be a work of true beauty and I have no doubt The Tree of Life will be one of my films of the year.

2. Essential Killing – Jerzy Skolimowski
Bit of a personal choice this one, but I’m giddy at the thought of a film that resembles Rambo and stars Vincent Gallo.

3. Black Swan – Darren Aronofsky
Many people around the world may have already seen Aronofsky’s latest film, but with a January release date for the UK, it’s a film I’m itching to see. Although I enjoyed The Wrestler, I’m aching for Aronosky to return to his weirder beginnings, as seen in Pi and Requiem for a Dream.

4. Melancholia – Lars von Trier
A new Von Trier film is always an event and the latest offering from the eccentric Dane looks as intriguing as ever.

5. How I Ended This Summer – Alexei Popogrebski
Winner of ‘Best Film’ at London Film Festival 2010, this is the story of two men working at a remote meteorological station on a Russian Arctic island. If the whole film’s cinematography is as sumptuous as the trailers, we’re in for a treat.

6. True Grit – the Coen Brothers
Many may have groaned when they discovered the Coens were remaking True Grit (lets face it their remake of The Ladykillers didn’t turn out too good), I for one was damn excited.

7. Armadillo – Janus Metz
Like a Danish Restrepo, Armadillo looks as if it could take the war documentary to the next level.

8. Never Let Me Go – Mark Romanek
Having made his name in the world of the music video, talented director Romanek takes Kazuo Ishiguro’s critically acclaimed novel to the big screen (if only it didn’t star Keira Knightley, this could be higher in the list).

Read the DN review of Never Let Me Go.

9. 127 Hours – Danny Boyle
As with Black Swan, this is another film many around the world will have already seen, but with an early January release in the UK, we’re still eagerly waiting to see the latest Boyle effort hit the big screen. It may not feature Bollywood dancing, zombies or a trip to the sun, but with Danny Boyle you always have high expectations.

10. Rango – Gore Verbinski
A strung out chameleon looking a little like Johnny Depp in Fear and Loathing in Las Vegas (and definitely sounding like him), wanders into a Western town in need of protection. I’m not a big fan of the work of Gore Verbinski, but if they all looked as good as Rango, I could easily be turned.