Making a short film featuring eye-catching visual effects seems to be the way to get yourself noticed in recent years. South African Neill Blomkamp was carving a pretty decent career for himself as a 3D animator working on science fiction television series such as Stargate SG-1, First Wave and Smallville. That was until he made his effects laden short, Alive in Joburg in 2005 and suddenly his career was catapulted to a whole new level. Four years later and Alive in Joburg had evolved into District 9, a Peter Jackson produced feature and Blomkamp was suddenly a wanted man. Next we had the online phenomenon that was Fede Alvarez’s Ataque de Pánico! Another short showcasing some outstanding effects, where we see Montevideo under attack from giant robots. As with District 9, Ataque de Pánico! (or Panic Attack! as it’s better known in the English speaking world) has caught the attention of a major cinema player, with Sam Raimi and his company Ghost House Pictures signing Alvarez, who is “set to make his feature film debut with a $30 to $40 million science-fiction film” (Film Junk). More recently we had Patrick Jean’s Pixels, which again sees another city (New York this time), under invasion from 8-bit computer characters. Unsurprisingly, Jean has been signed up by a production company fronted by a major Hollywood player, this time in the form of Adam Sandler Happy Madison. Who are currently in talks with Columbia Pictures to turn the concept into a feature film. “The plan is to make it a Ghostbusters-style action comedy in which characters come out of a video game to wreak havoc in the real world” (Film Junk). With the current formula for success looking like the path to land a gig in the feature world, it’s actually quite surprising to look at the path filmmaker Gareth Edwards took. Instead of making an effects based short as a way into feature films, Edwards instead took the huge leap straight into full-length film with his low budget hit Monsters.

Six years ago NASA discovered the possibility of alien life within our solar system. A probe was launched to collect samples, but crashed upon reentry over Central America. Soon after, new life forms began to appear and half of Mexico was quarantined as an INFECTED ZONE. Today, the American and Mexican military still struggle to contain “the creatures” … Our story begins when a U.S. journalist agrees to escort a shaken American tourist through the infected zone to the safety of the U.S. border. 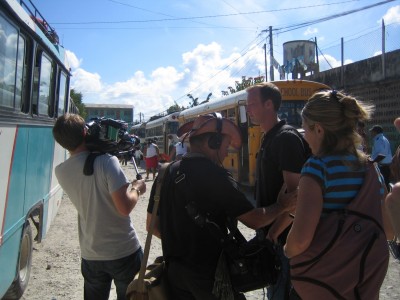 Although, Monsters relies quite heavily on its special effects at times, it would be wrong to label this as just another effects loaded movie. Instead what we are presented with is an apocalyptic road movie, focusing more on relationships and characters, than on the giant tentacled behemoths strolling the Mexican landscapes. Over the film’s 94-minute duration we are of course itching to find out more about the creatures from space, but I found myself more eager to discover how the relationship between Andrew (Scoot McNairy) and Samantha (Whitney Able) would develop. The young actors have great on-screen chemistry (possibly due to Edwards’ desire to cast a real couple) and you can tell early on there’s a connection between the two and it’s a bond that strengthens the further they travel down their hazardous path.

If I’m brutally honest, one of the small problems I had with the film was its CGI sections. I know for a film with such a limited production budget, this is probably being a bit too picky, but I felt at times some of the effects spoiled certain scenes. The beginning of the film in particular didn’t work for me and felt totally unnecessary. The grainy night vision shots of the giant walking Octopuss-like creatures added nothing to the film and only made me think I was watching some kind of Godzilla type B-movie. Not that there’s anything wrong with the original Godzilla movies, but they’re not exactly renowned for there dazzling effects sequences. Again, in the scene in the petrol station, the tentacles exploring the shop looked far too fake for my liking and somewhat spoilt what could have been a truly memorable scene. Saying that, the wide shots of the creatures meeting were immense and easily some of the best CGI I’ve seen in cinema in quite a while. To be fair to Monsters I’ve been disappointed by the effects in films with a lot greater budget than Edwards had to hand…….I’m looking at you Cloverfield! In general though, the aesthetics of Monsters were excellent and the slight disappointments I had were mere blips in an otherwise spectacular visual display and detracted nothing from the overall story.

Starting with the idea to make “Blair Witch meets War Of The Worlds” (Orange Films), the idea behind Monsters evolved several times with the release of Cloverfield and then District 9, but British filmmaker Edwards still persisted with his creation until it evolved into the film we have today. Monsters is not only a joy to watch but a shining example of that ‘just do it’ ethic (not the Nike slogan!) that we’ve mentioned on DN many times before. If things aren’t working out for you, pick up a camera, get out there and make something happen for yourself.