When your dad’s a world famous director, your cousin’s Nicolas Cage and you’ve starred in The Godfather movies, it’s not surprising that you’d be interested in fame. Somewhere by Sofia Coppola is the second film the young director has made looking at fame (third if you count Marie Antoinette) and although not as accessible (in traditional terms) as her first, Lost in Translation, it still shares a lot of common themes. In particular, both films focus on the isolation and boredom that comes with being famous, when you can do just about anything you want, you’ll run out of ideas eventually.

Hollywood actor Johnny Marco, nested in his luxury hotel of choice, is a stimulated man. Drinking, parties and women keep a creeping boredom under wraps in between jobs. He is the occasional father of a bright girl, Cleo, who may be spoiled but doesn’t act it. When Cleo’s mother drops her off and leaves town, Johnny brings her along for the ride, but can he fit an 11-year-old girl into his privileged lifestyle? – (IMDb)

Coppola sets the tone for Somewhere with the very first shot and pretty much lets us know what to expect for the remaining 90+ minutes. We are introduced to the character of Johnny Marco as he speeds round a very small desert circuit in his expensive sports car and what should be a thrilling activity is quickly depicted as a dull and monotonous experience in the actor’s life. This opening shot pretty much sums up Marco in an instant, he is a man trapped in an endless circuit of excess, but where in the car he has the ability to put his foot on the brake and stop, in real life he doesn’t seem to have this power. Shots like these become a running theme throughout Somewhere, as we see the life of a big-time actor played out in a series of somewhat meaningless sequences. Whether it’s the isolation and claustrophobia Marco feels when he has a mould of his head taken or the boredom and routine of watching twin pole-dancers, he just seems totally numb to his day-to-day existence. These are experiences most people dream of, yet for Johnny Marco they are reality and a reality he is becoming increasingly tired with. 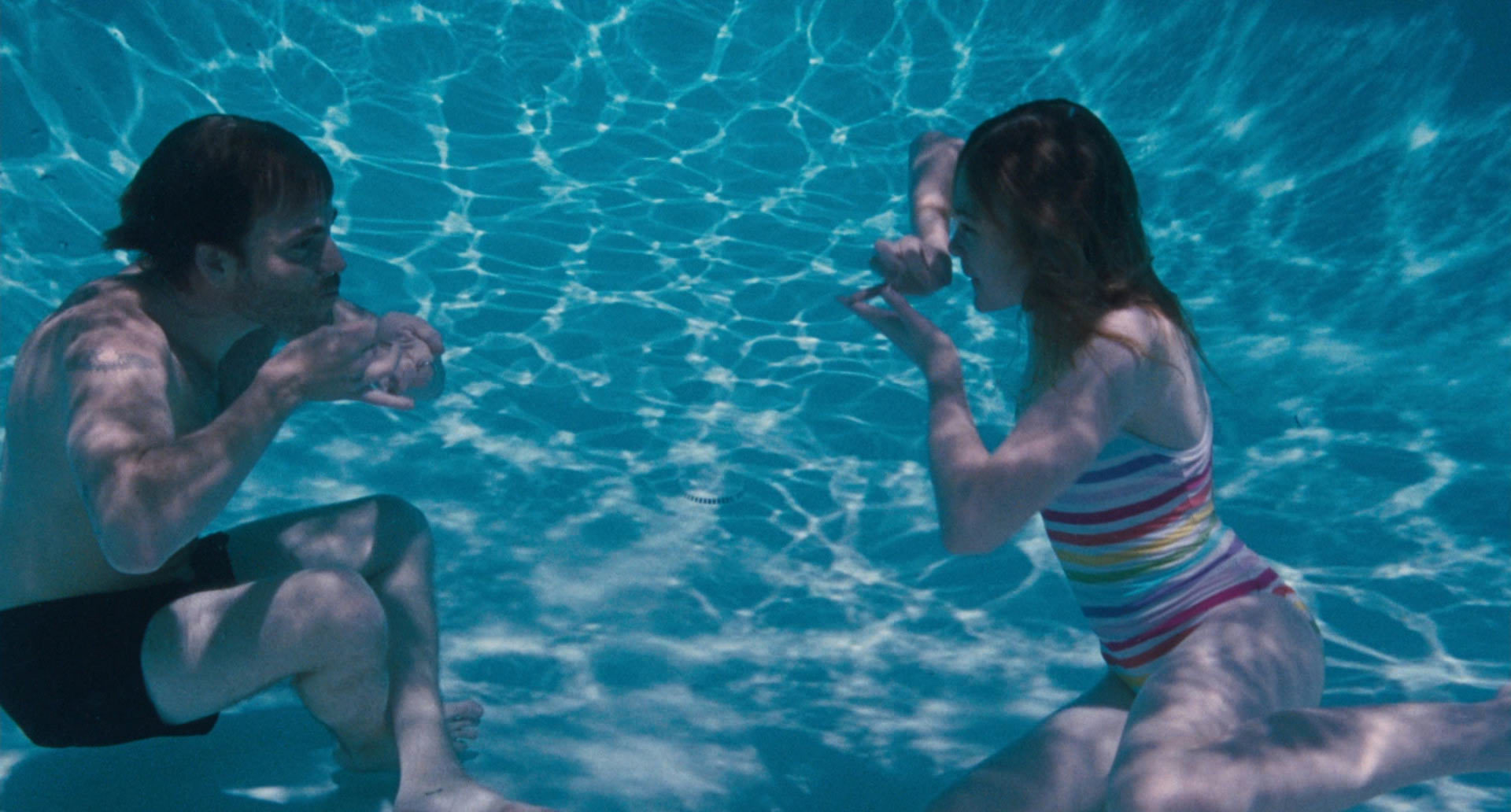 Johnny Marco (Stephen Dorff) is a pretty hard character to like, in fact for the majority of the film he comes across as a pretty shallow asshole. However, as the film develops and Marco spends more time with his daughter Chloe (Elle Fanning) his character warms and almost (but not quite) becomes likeable. Dorff for me has always been one of the actors who has pretty much breezed through his career, never really challenging himself and never landing decent roles. Yet in Somewhere, Coppola appears to have pulled off a perfect piece of casting by picking Dorff to play Marco as he fits the role perfectly and it’s hard to tell if it’s a great piece of acting from Dorff or if he’s just playing on past experiences. He certainly looks the role, one part handsome Hollywood actor to one part tired, hard-living loner, in fact he’s so believable as Johnny you start to wonder where Marco ends and Dorff begins. It’s not just the lead putting in a totally believably performance though, as Elle Fanning (seemingly the talented Fanning – there’s no Dakota style screaming to endure!) floats onto our screen as Chloe, stealing many a scene with her complex adolescence daughter routine. Like Dorff, she gets the balance just right with her character, coming across slightly spoilt and somewhat un-nurtured, yet bestowing maturity beyond her years. As it’s down to the two to pretty much hold our attention throughout the film, it’s a good job they perform well, if they hadn’t, the film could have quickly fallen apart.

For many the boredom on show in Somewhere translates to a boring viewing experience:

There are no doubt Buddhist monks who can gain fulfilment from gazing at the infinitesimal movement of a resting ladybird’s leg for 97 minutes, but even they might feel irked if they had paid good money to see Somewhere (Tim Robey – The Telegraph).

The question of why we should really care or be interested remains tantalisingly unanswered (Peter Bradshaw – The Guardian).

In a way I understand how some could find the meandering action of Somewhere somewhat boring; it doesn’t have the charm of Lost in Translation and what is on show isn’t exhilarating or action-packed, but for me this just made Coppola’s latest film even more intriguing. I loved the pace, I loved the lack of drama, I loved the nothingness! The cinematography of the film is almost made to look like this isn’t a film but a fly on the wall look into the life of Johnny Marco, except in the case of this fly it has an eye for the cinematic and an eye for a beautiful shot (flies only have 2 eyes right?). Somewhere for me is Coppola’s most adult film to date, it feels developed and its characters have depth. Many will disagree and find it an empty vacuous film, but as the old saying goes ‘one man’s meat is another man’s poison’. Or in this case ‘one man’s Somewhere is another man’s Jaws: The Revenge‘.