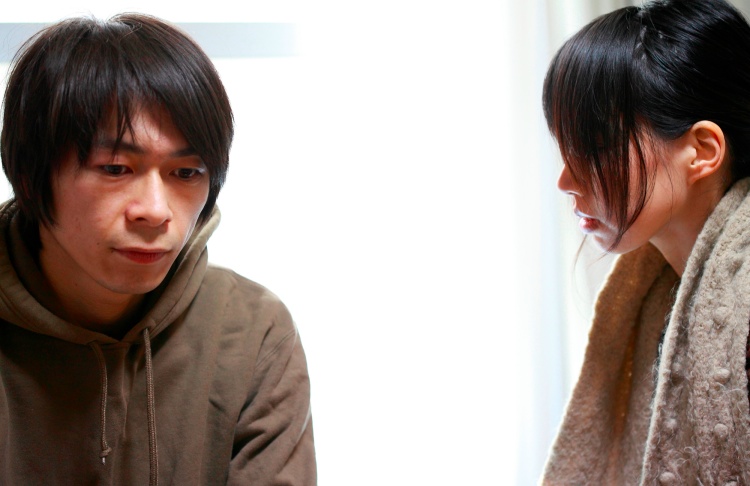 Love Addiction, alternatively titled Fuyu no Kemono which means ‘Winter’s Beast’ in Japanese, throws four characters with conflicting personalities into a melting pot of emotional lava. The foursome all work in the same company and, in a strangely incestuous way, spend their time off work sleeping with each other. The variation in attitudes on interpersonal ethics and emotional temperatures instigates a fracturing of friendships when truths are revealed, all at once in the same apartment room.

The director Uchida Nobuteru allowed his actors to improvise around the characters he laid out, recalling John Cassavetes in moments where the camera lingers after their conversations dissipate. Yet lacking the intense patience and remarkable shot composition of Cassavetes, Uchida’s film at points seems like an actor’s workshop session gone too far into operatic territories. The actors, overly dramatic, lacking subtlety in their demeanor and expression, are unfortunately incapable of holding the film when its essence entirely relies on their performances. A common tendency in contemporary Japanese cinema, the emotions climax one too many times, ruining possibilities in the fluctuation of dramatic sentiment.

Yet despite its flaws, the film’s dedication to its subjects and fearlessness in approach is admirable. The characters’ personalities neatly oppose each other but magnetically attract, causing nerves to twitch at every corner of the screen. Each time a gaze is thrown or avoided, the moment touches onto true and relatable feelings we have all experienced. The opening sequence between Shigehisa and Yukako, where she begins to suspect her other half for betraying her, is a confidently displayed drama with timed and structured editing, a duet between close-ups and mid-shots. Despite the improvisation, the dialogue in the opening moments is suggestive and never overly suggestive, a quality that the film loses in its peaking moments. The film understands that is ridden with clichés, particularly in its employ of Beethoven’s over-used sonatas, yet Uchida doesn’t seem to care and dives head first into his story.

After the predictable dialogue, the film hits a high point when they all lose themselves in a forest, replacing shouted words with sounds of scuffling leaves, taking on an unexpected turn into the entirely absurd. The spatial structure of the apartment space contrasts with the uncompromising forest where cogent orientation becomes impossible, throwing us into the wild. The climactic sequences communicate the irrationality of love, the difficulty in placing an explanation to such feelings, and allows us the mental space after all the chaos to ponder and reflect on what we have just peaked into.

The aim for authenticity that grounded its beginnings seems completely abandoned, yet the results manage to stay true to its characters and their development throughout the film. Love Addiction won the grand prize at the Tokyo FILMeX Festival and shows promise for the future of Japanese cinema.