Back to the Future: Japanese Cinema Since the Mid-90s

For their eighth year, the Japan Foundation have curated a film season out of their archives to present at the ICA and venues elsewhere in the U.K. For this year’s theme they decided to celebrate the forgotten gems of Japanese cinema of the past 15 years or so. Many of the films in their selection were screened once or twice on the U.K. festival circuit but if you blinked you probably missed them, so it’s great to see the films get a second-life in U.K. cinemas. The broad theme allows for a diverse range of films to fall within the canon of ‘films since the mid-90s,’ and the Japan Foundation, together with their advisor Jasper Sharp from Zipangu Fest and Midnight Eye, have used this opportunity to its full advantage and put together a programme that encompasses many of the different faces of contemporary Japanese cinema. This touring programme, along with Zipangu Fest last year, is proof that Japanese cinema is not just anime and horror. 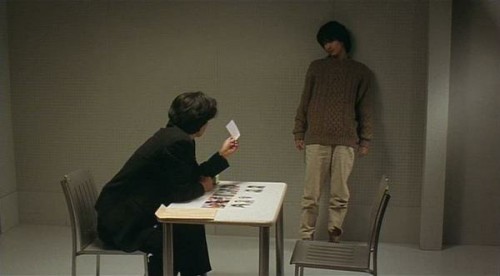 Cure is Kiyoshi Kurosawa’s serial-killer film with a twist – each murder is executed by a different person but each one leaves the same trademark ‘X’ carved into the victims. We could file them under copycat murder, but there is no way each killer knew each other’s methods, as the police had carefully left the detail off their public reports. An extremely unique take on the genre we are all versed in, Kurosawa bends the familiar codes and tired conventions only to throw them into unexpected realms that surprise us at every turn. We experience an unsettling realization that our usual predictions wont suffice and we’re hypnotized into Kurosawa’s universe that defies explanation, a perfect device for the thriller genre that Cure looms over but never quite conforms to. The colour scheme is uncompromisingly bleak, and with the addition of strained yet atmospheric soundscapes, Kurosawa conjures cold temperatures rarely summoned in audiovisual experiences. His more recent work Tokyo Sonata garnering both popular and critical attention through its Master of Cinema release, hopefully Kurosawa will receive the notice he deserves in the U.K. (he is already a favourite in France).

One Million Yen Girl is Yuki Tanada’s 2008 feature that centres around young-adult Suzuko, played by Yu Aoi from Bong Joon-ho’s Tokyo! omnibus entry Shaking Tokyo, who has taken on quite an unique lifestyle. After a minor incident that leads to an unfortunate prison sentence, social pressure and gossiping neighbours force Suzuko to make the decision to leave her hometown Tokyo after her release – so far so familiar. What makes her one-of-a-kind is that she is determined to move to another location every time she saves up one million yen, the equivalent of approximately £7500 (at a currently brutal exchange rate) and where the film finds its title. The set-up allows for quite an original narrative trajectory, a road-movie that focuses on the spatial identities of each space she finds herself in, rather than the journey itself, yet still stays embedded to the genre’s thematic modes of aimlessness and homelessness. Although she discovers her expertise in making kakigori (shaved ice) and picking peaches, she warns that it is not a discovery but an erasure of herself she is looking to achieve in her journey. The film’s protagonist is not the typical loyal-wife stereotype we find in most of the nation’s output, but instead, a self-reliant character that can survive life’s hurdles without a helping hand despite her confusion at what it offers her. Though the narrative device of the letter-reading that keeps her connected to her younger brother, who is bullied at school, proves tiresome and unnecessarily sentimental, most of the film manages to avoid clichés of recent Japanese quirky comedies and stays true to its atonal mood. The director, one of the leading female directors of Japan, is one to look out for and her previous films Ain’t No Tomorrows and Moon & Cherry are also recommended.

Who would have thought a Japanese all-female schoolgirl band was not just some geek-fantasy but a blueprint for an inspiring story? Linda, Linda, Linda may at first appear deceptively cute, and so it is, but it tugs on our heartstrings in ways unexpected. The film is an account of four teenagers preparing to perform some songs by 80s Japanese punk-rock band The Blue Hearts, and specifically their catchy tune ‘Linda, Linda,’ for a school-festival with only days of notice. The gang of four practice day and night in preparation, and the film documents their daily progress and the evolution of their friendship. Yet the film eschews all the usual classroom clichés – no breakups, no fights and no boyfriends intervening. Minor tensions are merely suggested, only to be resolved without much notice, sharply tuned into the high-school mindset where conflicts dig deep but are quickly forgotten. The four’s sense of innocence verging onto adolescence is conveyed in charming quietude, never exaggerated and nevermore condescending. The supporting characters, each one memorable for their slight quirks that are rarely annoying, together evoke a portrayal of high-school life that is full of charm in its depiction of youth. The film cleverly slips into strange dream sequences that instigate laughter not at the characters, but with them, and it is this sense of connection with our own nostalgia that the film cleverly touches upon but never enforces. Finally, the depiction of a Korean visiting-student, the vocalist of the band, is what elevates this film above the usual finely tuned quirky comedies that we have come to expect from Japan. Korean-Japanese tensions are often dealt with bold strokes, Oshima’s Death by Hanging being the strongest of its kind, but here are handled with deceptive nonchalance. Son, played by Doona Bae with excellent comic timing, is able to communicate with her friends via facial expressions, broken sentences and eye contact, a difficulty in communication usually exploited for sentiment or suggested as cause for bullying. Linda, Linda, Linda manages to seamlessly sideline these obvious attractions for dramatic effect, instead offering a quiet portrait of high-school life.

We find the exact opposite in Go, a story of a second-generation Korean immigrant Sugihara, where the Japanese-Korean conflict is dealt with loud vehemence. Yet this isn’t necessarily a bad thing, as the zainichi situation remains a problem that is rarely so boldly confronted in Japanese cinema. Zainichi is a problematic term, as the film points out, because it suggests a periodic residency rather than a permanent stay, and the film orbits around the question of an accented identity (to borrow Naficy’s term), the sense of non-belonging and unchosen splitness – “grass without roots” is how Sugihara describes his life-conflict. Koreans who reside in Japan are still victims to xenophobic prejudice, yet what is remarkable is, with the same skin tone and colour, the two nationalities are barely distinguishable – a truth that is pointed out through Sugihara’s remark that he wishes his skin colour was green. The zainichi reality is best captured through the relationship with Sugihara’s girlfriend Sakurai Tsubaki with tender brutality, as they embark on a romance with his background kept a secret. When Go confronts the Japanese-Korean issue it touches on remarkably nuanced territories, which is a shame as the film is constructed with such annoying brashness. The style is closest to Run, Lola, Run, with its over-exaggerated characters and situations, loudly delivered dialogue and a film style that is screaming for attention. The content of their screams are often poignant, but shrieked with such overstatement, and our only reaction is to cringe. Director Isao Yukisada’s recent film Parade (2009) won the FIPRESCI award at its premiere at Berlin International Film Festival, perhaps an indication of his promise, but Go certainly did not excite me for his future.

Finally, Sawako Decides is Yuuya Ishii’s newest feature-length film, an indie director that has been stirring up some interest on an international scale; the film was funded by the prestigious PIA Film Festival scholarship fund, a historical marker for indie talent in Japan. A collection of his shorts was screened at International Film Festival Rotterdam earlier this year, but they mainly comprised of odd-ball situation comedies that were one-joke wonders. It seems Ishii is more adept in the features department, as he is capable of brewing subtle developments for his characters and conjuring an entire world through their interactions more suited to its length. Sawako, played by Love Exposure’s Hikari Mitsushima, is an average girl living a ‘slightly-below middle-ground’ life who is forced to leave Tokyo, back to her pastoral hometown where her ill father and his clam-packing business awaits. Initially the factory-workers resent her presence – the city-girl who had left them long ago – but they slowly but surely develop a kinship out of necessity. Sawako is strangely self-assured about her self-loathing, always expecting the least from her peers and her own life, indecisive and lets life take it own turns, until she suddenly is determined to ‘decide’ for herself. The colourful characters that surround her accompany Sawako in her development, and the film abandons its comedic miseries into something brighter and afresh. Ishii’s editing style is sharp, often abruptly cutting mid-sentence into an entirely different space for humorous results. Ishii breaths some fresh air in the quirky-comedy genre that Japan continues to rehash. Third Window Films recently announced they will release Sawako Decides on DVD later this year.

‘Back to the Future: Japanese Cinema Since the Mid-90s’ will tour the U.K. throughout February and March, playing at the Queen’s Film Theatre in Belfast (21-24 February), the Filmhouse in Edinburgh (4-10 March), Broadway in Nottingham (11-16 March), Arnolfini in Bristol (18-20 March), and the Showroom Workstation in Sheffield (22-28 March).