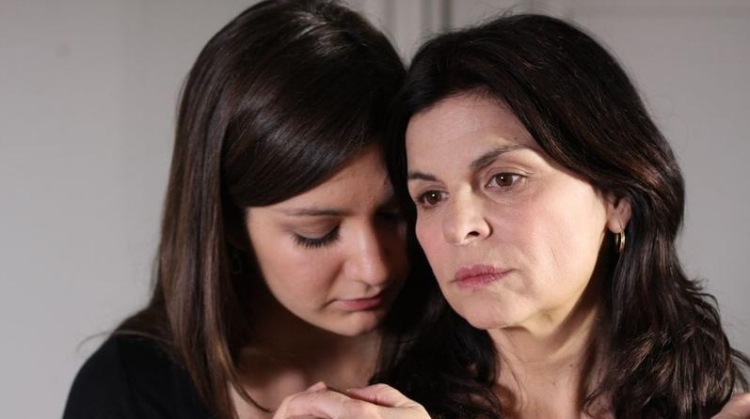 Perhaps more than any other film I saw at the festival, the title of Catherine Martin’s Mourning for Anna serves as an effective summary for the film itself: after giving an astonishing performance of a late Beethoven piece as part of a quartet, 23 year old Anna is found dead. Her mother goes to an isolated country house to mourn, takes walks in the woods, cleans the house and generally tries to come to terms with the loss of her daughter, partly through the company of an old friend – an artist who has moved back to the quiet locale to escape the clamour of the modern world. As if in agreement with these principles, the film shuns the frantic pace and loud soundtracks of much of today’s filmmaking in favour of a quieter, often wordless rhythm. Indeed, it could almost be said that the character of the artist acts as a kind of reflexive device within the film, commenting as he does that “I’d really like my work to have meaning, to be life-affirming. And this light’s so beautiful” – and this in a film full of astonishingly lit (and immaculately framed) images. Yet the artist’s statement also represents the film’s biggest weakness: the striving for meaning gets distracted by other concerns. This isn’t to say that the film doesn’t have depth, merely that it never plumbs it as thoroughly as perhaps it could. Early on the in the film, the stark framing of the mother identifying Anna’s body recalls images from Bergman’s Persona, and ‘Anna’ is one of the names that recurs throughout Bergman’s oeuvre. Whether intentional or not, these reference to Bergman’s work serve Martin no favours, reminding one as they do of the depth and power of the Swedish master’s work – a depth and power unfortunately not matched here. But then few filmmakers have ever matched Bergman’s intensity, and Mourning for Anna has much to recommend it.

In addition to its commentary on artistic creation and grief, the film also puts forth the Dostoyevskean philosophy that ‘love is life’, and while this aspect threatens at times to overthrow the narrative examination of grief, it’s unquestionably true that grief and love are intertwined, and the film manages to explore these emotions in a way which never strays into sentimentality. Furthermore, it’s genuinely interesting to see a film which plays out a dramatic murder story not from the perspective of the police or the perpetrator, but instead from the secondary victims of the crime – surely far less explored but equally rich territory for filmmakers to tread. The film also manages a convincing blend of reality and fantasy, with effective, if occasionally oblique, dream sequences helping us to delve further into the mother’s wounded psyche.

At times the long, frontal images imbue the film with a certain theatrical artifice, but in a sense this supports the idea of the film’s reflexive edge. The film’s quiet mood is matched perfectly by its sound design (the noise of fingers running over a bowl become especially evocative). If you’re willing to let it, Mourning for Anna is a film which will take you on a tactile journey of contemplation. Those that like their cinema slow and steady will find much to enjoy.