Surely, there is no better indication of a film’s tension truly gripping its viewer, than when you have to remind yourself to breathe on more than one occasion? Having seen the impressive trailer for Sean Durkin’s debut feature Martha Marcy May Marlene, I was aware of what to expect, but nothing could prepare me for just how captivating and thrilling the director’s first venture into full length filmmaking would be.

Having turned heads at Cannes and Sundance in 2010 with his award winning short Mary Last Seen (which acts somewhat as a precursor to Martha Marcy May Marlene) Durkin was back touring the film festivals again in 2011. This time picking up the Directing Award and a Grand Jury Prize nomination at Sundance, proving that Mary Last Seen was no fluke. However, Durkin was no stranger to film festivals prior to 2010, having taken on producer duties on the critically acclaimed Afterschool (2008), by fellow Borderline Films director Antonio Compos. Having served his time as producer (he also produced on underground hit Two Gates of Sleep), Durkin decided it was time to showcase his directorial credentials with one of the most confident and assured pieces of filmmaking you’re likely to see all year.

Having recently escaped the suffocating, intimidating grips of a Mason-esque cult, we follow Martha (or Marcy May as she was known in the collective), as she struggles to adapt to everyday life without the support of her adopted family. Moving in with her sister Lucy and husband Ted, the estranged Martha is haunted by her experiences and crippled by fear, as she comes to terms with not only her past, but also what her future holds. 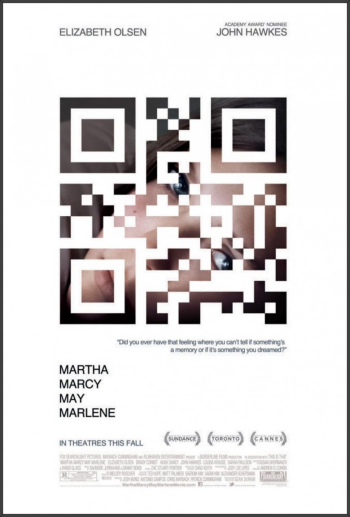 “Do you ever have that feeling where you can’t tell if something is a memory or if it’s something you dreamed?”

As Martha’s history with the commune is slowly unraveled on screen, Durkin’s film flows between past and present, memory and reality, with consummate ease. With each reveal, the tension increases as our apprehension heightens and soon we begin to discover that Martha’s paranoia could well be just that. As our knowledge of the cult’s disturbing behaviours increases and we discover Martha may not have quite escaped their grasp, Martha Marcy May Marlene exposes itself as one of the most enthralling thrillers of recent times.

Although her older, more infamous sisters Mary-Kate and Ashley may have held the spotlight in the past with their dominance of the preteen market during the late ’90s and early 2000s, if this performance is anything to go by Elizabeth Olsen may soon become the dominant Olsen sister. As the titular Marcy, her performance is one of great complexity, as this fragile young woman attempts to display an inner strength, when her world is crumbling around her. Calm and serene one moment, then panicked and hysterical the next, Olsen totally convinces as someone struggling to discover her place in the world. Maybe a struggle she is familiar with being the sibling of twin sisters with worldwide fame?