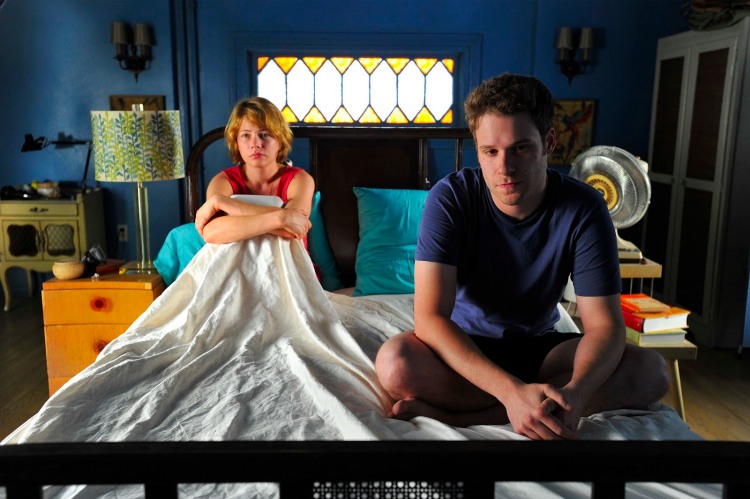 Beware, spoilers ahead so come back after watching if that’s a bother. You have been warned!

I’ve always been suspicious of couples who have a schtick in constantly talking to each other in baby language or the like. Apologies if you’re one half of said couples but I can’t help my opinion and there it is. The reason these besotted lovebirds draw my suspicions is because I can never shake the feelings of contrivance such behaviour produces, it being the nonsensical equivalent of saying, “LOOK AT US. WE ARE SO INTIMATE AND IN LOVE WE DON’T EVEN HAVE TO SPEAK PROPERLY”. If you have to convince each other of your intimacy by speaking like an 18 month year old toddler then I doth my cap to your unshakable besottedness, because when you do it in public you don’t care who knows you’re an idiot.

Margot (Michelle Williams) and Lou (Seth Rogan) are one such couple, which was not the first alarm bell that Sarah Polley sounds in Take This Waltz. The opening scene sees Margot at a folk park where history is acted out asked to flog an actor who has ‘Adulterer’ written across him. OK, let’s not pretend the opening’s subtle, but everything else about this film is. I loved it.

Margot and Lou are married but Margot is discontent with her lot. On a flight she meets an extremely handsome man, Daniel (Luke Kirby), who serendipitously lives across the road from her. As the film progresses it charts Margot’s betrayal of Lou. The couple are childless and live together in a Toronto suburb. Lou endlessly cooks chicken for a recipe book that you get the distinct impression will never be written. Margot talks to him in the above mentioned baby language and wistfully searches for something more as she starts to spend an increasing amount of time with Daniel. Whilst she doesn’t physically cheat on Lou, the meetings are so cloak and dagger and the attraction between them so obvious, that the viewer is left in no doubt that she is betraying her marriage. Set against this are the relationships that orbit their marriage, such as her friendship with recovering alcoholic Geraldine (Sarah Silverman) and Lou’s family. Eventually Margot makes a decision between her marriage and the handsome stranger. 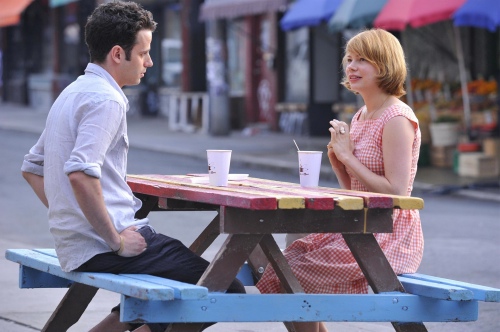 For me, two scenes stand out in particular in Take This Waltz, the first being Seth Rogan’s reaction to what I assume is Margot telling him she’s leaving. We never see what causes him to breakdown but the result is breathtaking acting by Rogan. I’m so used to his rubber face contorting itself in to various comical guises in mediocre Hollywood comedies that this delivery is both heartbreaking and relentless. Cinematographer Luc Montpellier shoots the scene so that we only see Margot’s final response to his tears and it’s cut in such a fashion that it almost seems like out takes of raw emotion. Montpellier should also be applauded for the film’s vivacious colours which immediately struck me for their Instagram-like beauty. My second favourite scene charts Margot and Daniel’s relationship in two minutes. It is so cleverly done, starting with a bed in the middle of the room as their shared possessions multiply around them denoting the passage of time and the item that is fundamental to their relationship. As time passes the bed becomes less integral, reflecting the change inherent in all relationships as they mature.

You may know Sarah Polley from her acting days. She’s been in lots of films but my favourite is Go where she plays an accidental drug dealer. Polley has directed a variety of shorts and for this her second feature, she once again took on the combined writer/director role as in the Oscar nominated Away From Her. However with Take This Waltz it seems that Polley has crafted a somewhat divisive story. There are many people who believe the film is written in such a way as to encourage you not to judge Margot for cheating on her husband. It’s true that the betrayal is portrayed so subtly and slowly that when the physical act takes place you’re not shocked by it. However, I did judge her. Not as an adulterer but as an individual who will forever be discontent no matter who she has a relationship with. Some people are built to always be looking for the next thrill and if it isn’t imminent they leave. This is what Margot does. Whether that makes her a bad person or not is for the watcher to decide. Sarah Silverman’s Geraldine (who is extremely well cast, plays it straight and is as good as most ‘proper’ actresses around) tells Margot something that she should really pay heed to:

“Life has a gap in it… It just does. You don’t go crazy trying to fill it.”

2 Responses to Take This Waltz