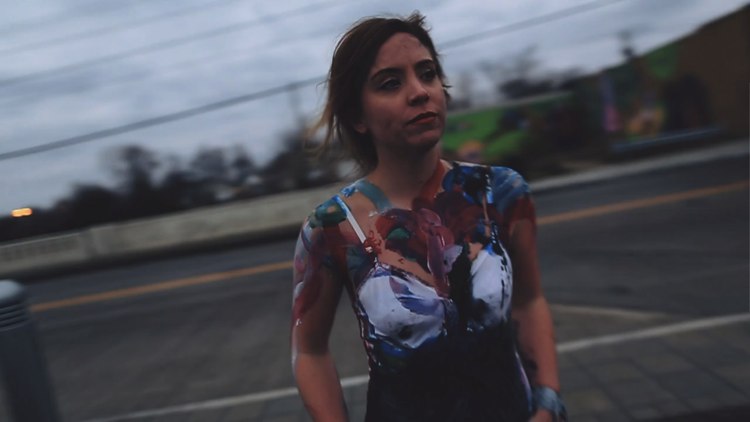 “Sometimes when listening to music, stories just appear, and that’s how this video came to be. While listening to Buke and Gase’s new record the first track just hit me. With that first chord pounding though my headphones I could instantly visualize someone escaping, running out of am industrial building from a kidnapping. wanted to make that first scene to really say something and intrigue you. So I came up with a character who kidnaps girls to turn them into art pieces.”

An odd concept perhaps, but one that director Daniel Arthur was able to take to his friend and artist Kyle Krauskopf, who stars as the kidnapper and whose studio played host to this unofficial Houdini Crush promo. The first element shot on the production’s Canon EOS 5D Mark III, Opteka Shoulder mount setup was the paint scene which took a full day of filming to capture. As the scene needed to be filmed in sequence, Arthur took extra care when prepping the shots as there was no going back once the first dab of paint was applied to actress Rebecca Dixon. The following day the crew ditched the shoulder mount to move on to a gorilla style night shoot at a local Indianapolis bar – the 5D’s high ISO capability meaning they could still gain a naturalistic feel without bringing in extra lights. Arthur then took around a week to edit the promo, slowing the 60fps shot footages down 40% to hit the 24fps look he wanted.