We’ve long been fans of the experimental side of filmmaking here on DN and the possibilities which lay before directors who are willing to discover and discard their own rules as a project progresses. As inscrutable as some of these pieces may seem on first watch, they often contain a coherence, which while not obvious, will gradually reveal itself to you on subsequent viewings as you become conversant with their internal logic. The Le Mystère music video from director Raoul Paulet for Hugo & The Prismatics is one such piece:

We asked Raoul for a guided tour through the creative and technical challenges presented by this journey of self-discovery, which mixes Kuroko, surreal optical illusions, animation and analogue visual effects:

“The main creative challenge was to merge performing arts with design, animation and VFX, without relying just on CGI techniques. I wanted to create a world, where geometries could mix together, while 2D and 3D spaces were blended into one dimension to create an optical illusion, a distortion of the reality. I also wanted to explore the idea of the Japanese Kuroko technique, by turning it into something more contemporary, with a strong link to the design and animation field. For example, I asked performers to animate objects and move things with a constant eye on the dynamic of those ‘manual animations’. But their roles weren’t just about this; they were also active presences on the stage. By interpreting all the black shadows the actress could see, feel, or was trying to escape from, it was my intention to give the Kuroko black mask people the space they deserve on stage as actors in their own right. I also approached the stage as if it was a Photoshop/After Effects canvas. I wanted to work within a living layout, whilst focussing on creating (beautiful and very aesthetical) analogue and ‘in camera’ effects.”

“One of the main technical challenges was to create the set: the main scene we built to represent this surreal world. The approach we settled on was to give the viewer the feeling that it was already retouched on Photoshop (that analogue effect, again!) Another big technical challenge was to design and animate dynamic scenes in camera, i.e. the scene of the mirrors. In this scene, we see the lead actress falling over a mirror, impact and break it into a lot of smaller bits. We had to:

A big plus of this project has been the collaboration with performers and dancers who already know how to deal with space and can reproduce the same dynamics of a slow motion/accelereated action.” 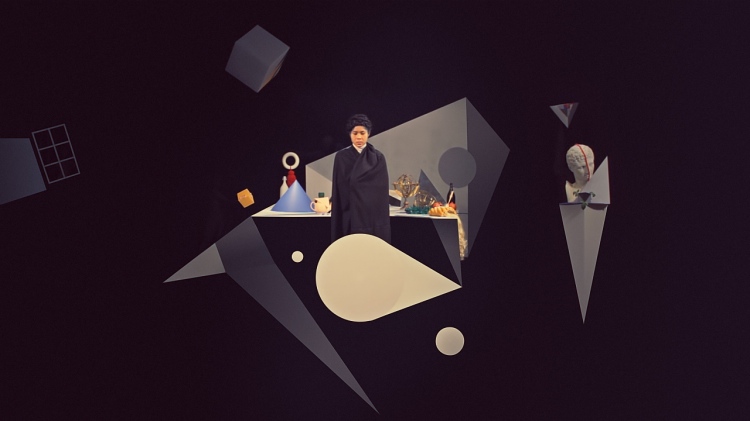 With so much of Le Mystère achieved through an inventive approach to practical effects and Raoul’s intention to maintain the feeling of watching a theatre stage, post was more of a ‘final touches’ exercise, in which a software mix of Photoshop, Illustrator and After Effects were employed to retouched scenes with CG animation, vector shapes or colour correction to enhance the surreal world.