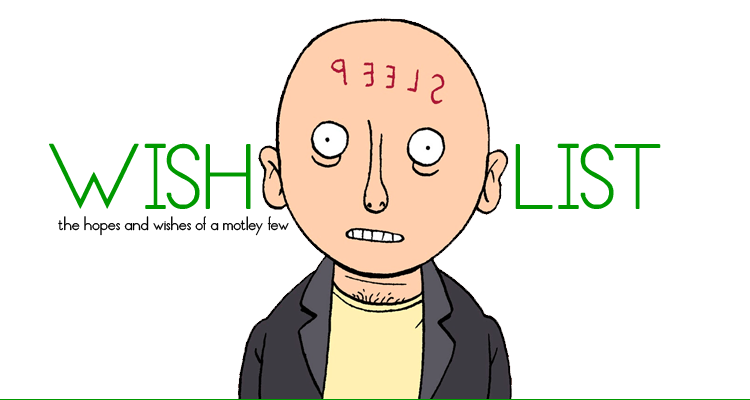 We’ve been following the work of Andrew ‘GRIFF’ Griffin for some time now – ever since we were initially bowled over by the emotional power of his striking multi-track music promo for The Cinematic Orchestra, and were once again moved close to tears with his follow-up short The Gift – a melancholic reimagining of the legend of the stork.

In a complete change of direction the filmmaker’s latest short Wish List, a collaboration with UK-based illustrator Scott Garrett, is a light-hearted, humorous animation detailing the wishes of a random collection of misfits. Due to air as part of Channel 4’s Random Acts tonight (Monday 3rd June 2013) at 11:05pm, Griff spoke to DN a couple days ago to let us know all about the project and how it was working on something so different to The Gift and To Build a Home:

My approach to jobs varies more according to the brief than the media. I wasn’t trained in it but I’ve been doing animation for years now and it’s different every time, probably because I’ve never really settled on any one style. What stood out for me about the process with this one was a very sympathetic and indulgent client who literally left me alone. Normally I work in commercials which – because you need to co-ordinate a team of people – are regularly and rigorously plotted out as storyboards, blockomatics, animatics, line tests and so on, so that by the time the final animation’s done, there’s no room for errors and in some instances I’ve not had a physical hand in any of it bar its ‘direction’. This was really different and we were left alone to make it, literally, as there wasn’t a budget to get a team on board. The most I gave C4 was an outline and a rough animated storyboard at the start that showed them vaguely what the content would be – but it changed a lot throughout the process and we were allowed the space to do that so long as it ran between a minute and a half and three minutes.

This meant that rather than pace/plan/block everything out – as you’re SUPPOSED to do, and as I’d generally recommend any animator should do – I went straight to final animation, but in increments.

Firstly I’d pick one of Scott’s many characters, and scripted around his one word gags to see if I could flesh them out a bit, then I started with the voice, recording Steve/myself reading the script, choosing the best take and then playing with the speed/pitch etc. to make each one distinctive. Then I’d go straight into animated lip sync. Once the lip sync was done I’d pop that mouth on the face and animate the eyes, then put the face on a head and animate that and so on a so forth until the whole body was animated. This wouldn’t work for everything, but was well suited for this job for a few reasons:

Firstly, there were over 30 characters to animate, so by getting the lip sync done straight away I knew I would at least be able to have them all talk, even if some would only have minimal movement.

Secondly it suited the piece, as Scott’s illustrations worked beautifully already as still images, so any movement was always only ever going to be embellishment rather than essential, so I was lucky in that respect.

Thirdly it kept it fresh for me for the whole project, which, when it’s so full-on is really important. I never felt I was repeating the same sequences over and over because I didn’t plan them, I just did them the once and kind of ‘found’ it as I went along.

The downside was that a couple of them didn’t work and were ditched as it would be too labour intensive to save or start again, but overall it was a lovely method to use, and a bit like using actors in that it felt far more spontaneous.

Through the aforementioned works, we’ve become accustom to Griff delivering some of the most powerful drama you’re likely to discover in the medium. Yet, despite coming to our attention through his live-action work, the talented filmmaker is actually a practising illustrator and animator and we finally get to enjoy these skills in short film form with Wish List. So how was it for Griff to turn away from live-action for his latest film and inject a little comedy into his catalogue of shorts?

The tone of TBAH and The Gift are the anomalies in my reel and they came about as being reactionary to working in commercials. If you spend your day trying to make a pancake look happier or a newly washed towel look like it smells orgasmically delicious, you’re bound to want to vent some demons when it comes to more personal stuff. Despite appearances the shoots of the live action films were all great fun, but the post was sometimes pretty awful and overly drawn out and there was a lot of self doubt, so if there was one thing I wanted to get out of this it was to enjoy myself again; and I can honestly say it was the most enjoyable job I’ve ever worked on, simply because it’s someone else’s jokes, so it was funny and different each day.