Nicolas Ménard Reveals the Inspiration Behind His Latest Animation ‘Somewhere’ 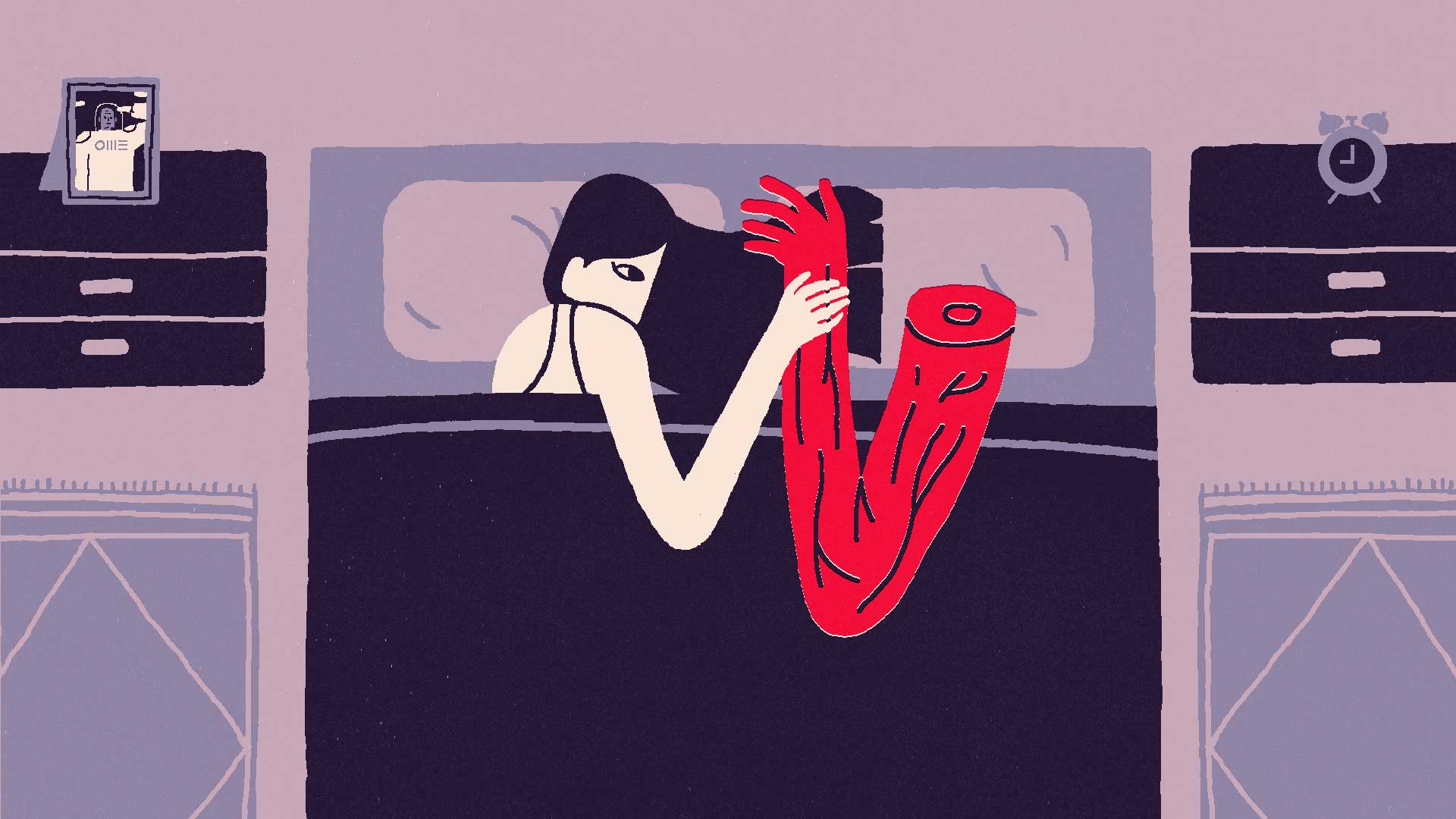 Look past its striking colour palette and unusual design and at the core of Nicolas Ménard’s impressive RCA animation (he’s currently studying for a Masters in Animation) is a hugely personal tale of separation and longing. Putting his background in print to good use, Ménard’s story of love and loss manages to combine beautiful composition and visual flair with his burgeoning talent for storytelling. Eager to find out more about the look of his film and where its narrative came from, I spoke to Ménard to unravel the mysteries of his one-armed astronaut.

Conceptually, the narrative of Somewhere is quite unusual, can you tell me where the story of this one-armed astronaut came from?

When I moved from Montreal to London to begin my studies at the Royal College of Art last year, I had this constant, weird feeling of having left a part of me behind. Like a part of me was still living my old life in Canada. I wanted to illustrate this feeling that comes with immigration in this film — and the feeling of missing someone in the distance — so I came up with the idea of an astronaut leaving his arm behind. The fact that the missing arm doesn’t seem to really affect the physical abilities of the character illustrates more a symbolic, emotional handicap than a physical one.

The film was kind of an ‘art therapy’ to get over a past relationship that didn’t make it when I moved to London.

I never really felt the urge to express emotions in my work before, but here it seemed interesting to use them as raw material to craft this story. I wanted the film to be touching but kind of cold at the same time, with the characters not showing much emotion, their emotions instead communicated through their actions and the environment.

Visually, your film has a very distinct style, it plays with perspective and scale brilliantly and really utilises every pixel of the screen – is developing a distinct style something that has been important to you when making animation or do you try to keep things as open as possible and change style according to the project?

I think it’s indeed important to me to develop a distinct style, but with every project. As time goes by I’m reusing a lot of the same symbols and my graphical language seems to even itself a little bit, slowly but surely making my work more recognisable. I feel that each new project needs its own set of rules, like a branding. So each time I start a new project — either client work or personal work — I think a lot about how my visual language could evolve and adapt to fit the project, often leading to developing a new, specific approach. 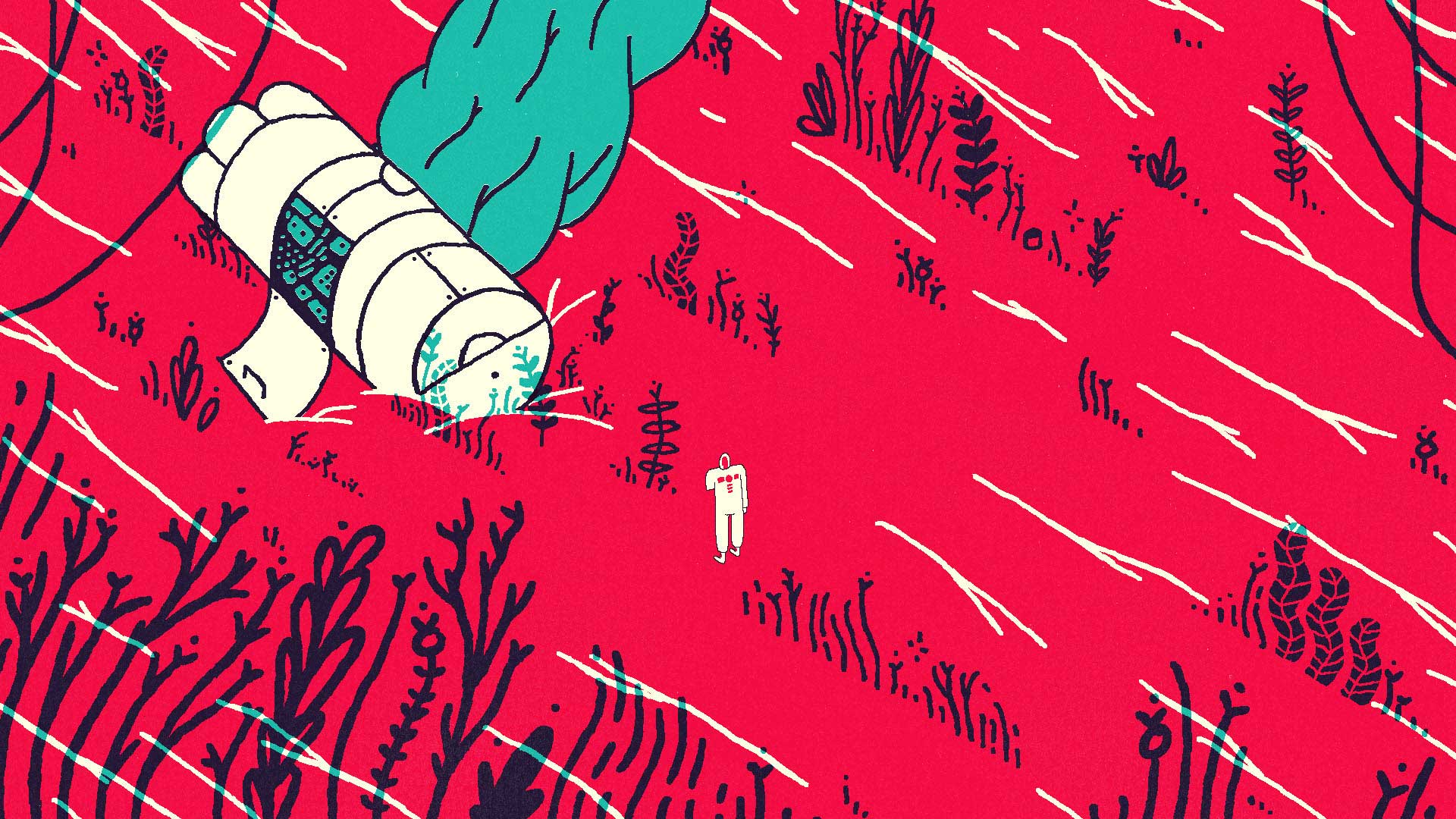 Colour plays a large part in making your film feel stylistically unique, how important is the use of colour in your filmmaking? What made you choose this particular palette for Somewhere?

During my BA I used to do almost all of my illustrations in screen printing, forcing myself to use limited colour palettes. I always found this technical limitation very inspiring to find new visual solutions to simple/old ideas (like an astronaut in a spaceship). For the film I thought it would be great to limit myself like that as well, so I chose two different colour palettes: the red and teal of the alien world and the desaturated violet for Earth. The idea here was to keep both worlds distinct but coherent in a simple fashion.

One of the early ideas of the film’s technique was to print all the frames and scan them back into the computer to give a unique print look (I did that before on my short film woop woop, chop). But obviously it would have been way too long to do so on a 6m50s film. So I decided to fake the effect on the computer. To achieve this, I had to actually work each image like as if they were going to be screen printed, to be able to create color separation (notice on the film how there’s alway a colour wiggling, being slightly offset). This is also the reason why I used a pixel brush for the whole film, because screen printing works with little dots as well (it’s a silk screen made out of very tiny squares). It was also making colour selection easier during the production. 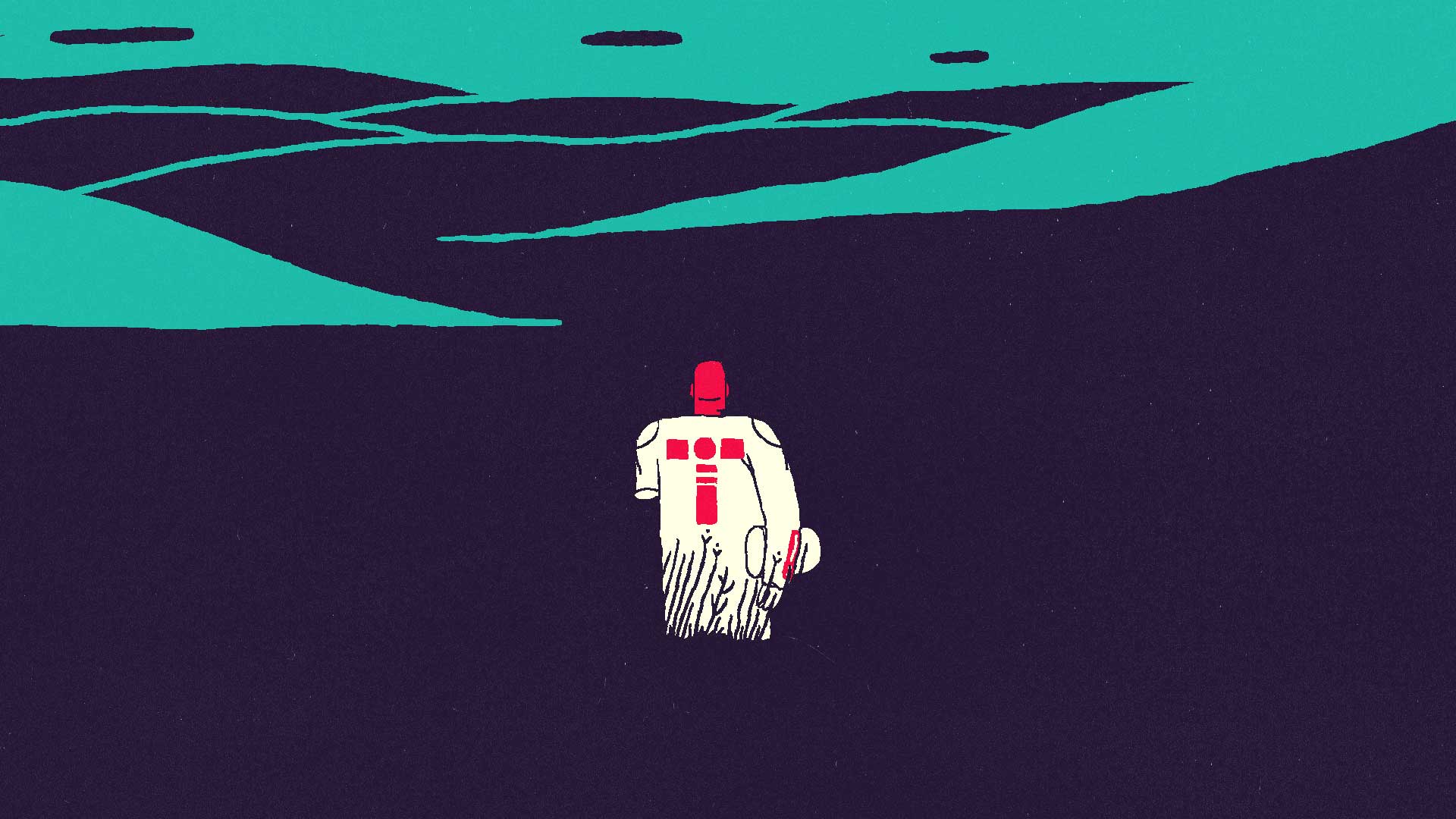 I came to the RCA to give myself some time and space to develop myself as an artist. I’m actually a graphic designer before being an animator/illustrator, and film-making is something quite recent in my practice. So the RCA is a fantastic place to make both print work and moving images, since the visual communication course is in the same building as the animation course. I’m really glad to have access to amazing resources and fantastic people which I can share with and learn from. It’s a unique experience.

I’m currently writing a lot of stuff for my second year film at the RCA, which will be accompanied by prints and zines. The approach will be very different from Somewhere. I used to write more absurd stuff so I’ll be back to my sources. It will be in 3D, much more fast paced and rhythmic, with voice acting. I’m trying to find new ways to genuinely enjoy film-making, so it might feel more like some smaller projects I did recently Des exercices de lèvres and my Petit Néant Ident but on a short film scale.