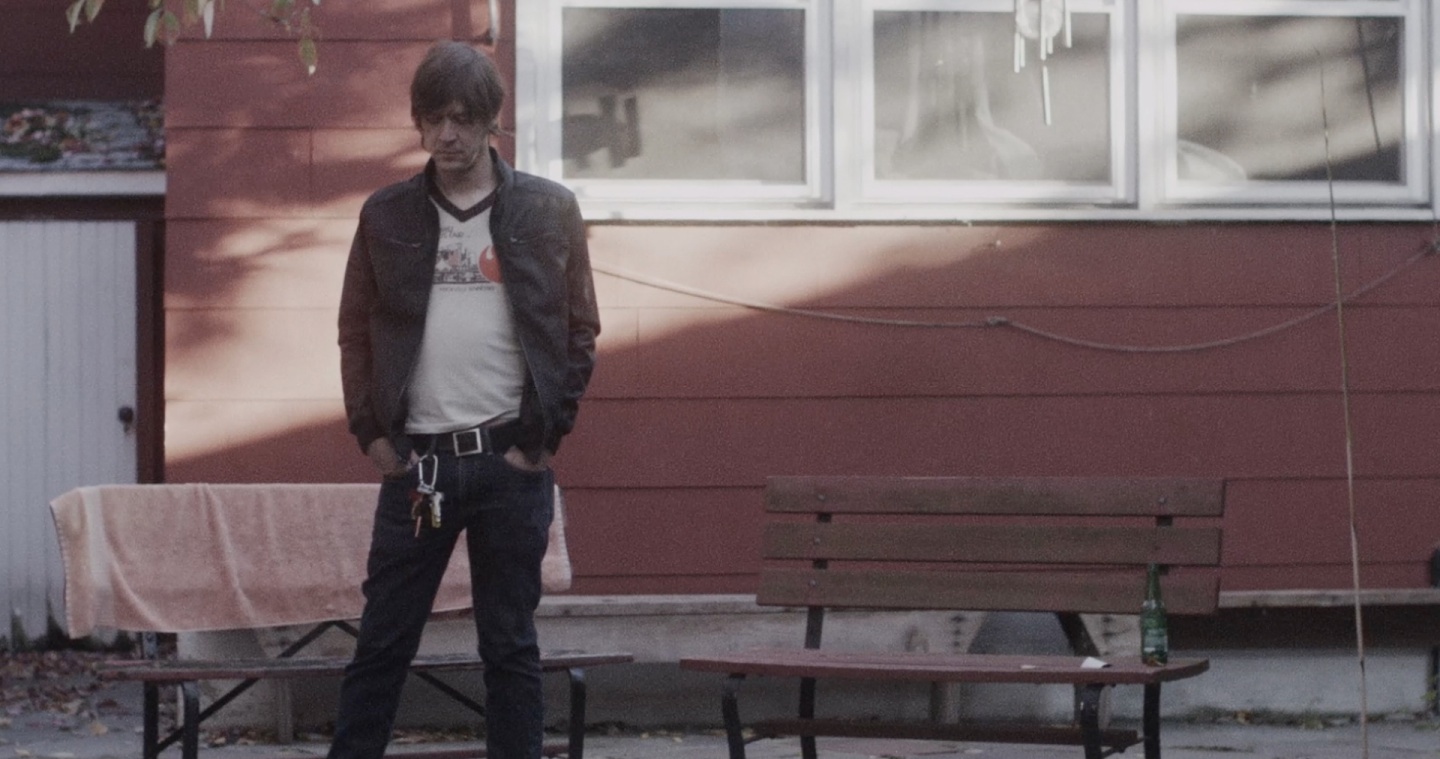 The last time we mentioned DN directing fave Alex Amoling in conjunction with ambient/post-rock two piece Hammock, it was on the back of his successful competition entry submitted for their track Mute Angels. Well it seems that just like us, the band couldn’t get enough of Amoling’s work and so drafted him in early to see which track from their new album ignited his imagination. I Could Hear the Water at the Edge of All Things, was that track and the plaintive tale of a father and son trying to keep their heads above water was the result. Take a look, then read how Amoling moved from contestant to collaborative partner.

You first worked with Hammock after winning the Departure Films competition with a re-edit of your sci-fi thesis film, how did the relationship and commission for this develop from there?

After winning the Departure Films competition a couple weeks went by and Johnny Pleasant, their manager, reached out to me to share the upcoming album Oblivion Hymns. They were very happy with the Mute Angels video and wanted me to go through the album to see what songs I connected to. I couldn’t help but listen to the album on repeat for the entire week. It was insanely exciting for me to hear the stories of each song and connect each one into a larger narrative thread. They were specifically looking for a lead video to be released before the album on Nov. 26 so we bounced ideas about which track and we all came to I Could Hear the Water at the Edge of All Things. The entire process was very collaborative and open from the start. We kept a fluid conversation going over the course of the month and half of pre-production with different loglines, different themes we thought of, and our concepts of Oblivion and its meaning. Some emails were stream of consciousness between us and everything felt like it unfolded naturally. From there I sent over a few ideas in logline form, which they responded well to, but after visiting some friends of my girlfriend in Staten Island, I realized I needed to do something there. I sent over a new logline about this darker story of a father and son and their financial struggle. Marc and Andrew ended up wanting to pursue that idea and were on the same wave length about taking the video into a darker and more shocking direction under a linear narrative structure. As I was scripting, we continued to coordinate and exchanged ideas of Oblivion in conjunction with one of their photo shoots and their album art, in order to bring everything into a cohesive package.

How much ongoing input did Hammock have into the production once the treatment was accepted?

A majority of the input was during the scripting stages and post-production. Instead of the usual music video treatment with an outline / breakdowns / visual inspirations, I wrote out an eight and a half page screenplay to lay out all of the elements and structure. My only visual cue to them was that it was going to be filmed in a pseudo-doc style mixed with more composed moments. Together, we went through about two drafts of the script to incorporate all of our ideas and focused on building a strong foundation over the course of a month. After that I was set free in Staten Island with my crew and Hammock’s confidence to capture the material the way we intended. We all knew that, at the end of the day, we only had a certain amount of funds and a lot of pages to film so things could change, elements could be dropped or replaced, and others could be completely improvised. Once we were done filming, I put together the album trailer in four days, then immediately moved onto the full video, putting out a new cut for them to view almost every night.

There are elements, such as the tattoo, which orientate us throughout the film, was that something you hit on as a necessity immediately?

Yes, definitely. The make-up and props were written into the script as specific moments we wanted in order to give little tidbits of backstory and to accentuate certain themes. Originally, I was considering putting a teardrop tattoo on the father to quickly tell the audience that he has a criminal past, but after some research from Madeline, the make-up artist, we went with the dice tattoo. It has a couple different meanings, but the ones we connected to the most were that it represented being alone in the world as well as prison itself, the four dots being the walls and the middle dot being the prisoner. It had a more natural and subtle approach that complimented the character and material. Another key element that we focused on in the script and on the shoot was the son’s backpack. Madeline put all these great children’s doodles on it that, by the end of the film, are torn apart and covered in blood over the father’s back. It’s a very intense visual that carries a variety of meanings to different audience members with the most universal being the destruction of innocence. Other smaller elements, like the son’s toy guns, sheriff’s badge, and his friend’s ski mask were scripted to give contrast to the characters as well as foreshadow the coming events.

It can be hard getting the right performance from child actors, especially without dialogue – how did you find and then work with the cast to build a believable family bond?

After I visited Staten Island and thought about the idea, I actually wrote it around a family I had become acquainted with through my girlfriend, Madeline. Part of achieving that authentic feel, which had been a very important part for the intimacy of the story, was to work with a real family that lived in Staten Island. I met with Nick, who plays the father, to talk about the idea, wrote the script, shared it with everyone, and then visited them all at their condo on the island. While I was there I got to know everyone over dinner, see how they reacted to the idea, and then planned from there. When it came to filming, everyone was great to work with and if anything was challenging for Rory, the son character, we would either scrap it, make adjustments, or follow him to see what would happen. For someone at the age of seven, he did an amazing job and I hope it was a great experience. I still owe him a visit to fulfill my promise of playing Transformers with him. Soon, very soon.

Can you take us through the production process, (kit, shoot duration, etc.)?

For production we filmed for three days from October 25th to the 27th. Friday was in Windmill Studios in Williamsburg where we shot all the material for the album trailer and the sections of the video where we see Oblivion. Saturday and Sunday were devoted to the rest of the script in Staten Island. Scheduling wise we were constantly moving so my Director of Photography, Sharif El Neklawy, built out a pretty mobile, but effective kit for the shoot. It consisted of his RED Scarlett with some Zeiss Superspeed lenses, two c-stands, two 1×1 Color Light Panels, a flag kit, and a few other accessories. Each day we’d head out around 8:00am, film b-roll of the island, meet up with cast at 11:00am, film as many scenes as possible, and then we’d get home between 11:00pm and 12:00am. Amazingly we were able to film all eight pages that took place in Staten Island in two days with a crew and cast of eight people.

Was the timeline switching present from script stage? How did you find the right balance in the edit?

Originally, the use of intercutting was in two portions of the script, but it eventually developed further in the edit until it became overall style. I knew that, based on the film standards of one script page equals one minute, our eight and a half page script wouldn’t fit in a five and half minute song. Then when you’re filming at forty-eight frames a second you’re essentially doubling what should be an eight and a half minute film to a seventeen minute one. We had a lot of footage with only so much time to tell the story so it allowed me to be more creative during the editing process. In a five day span, I cut together about ten different versions with only four of those being seen by the band. Some were based on how the script flowed where others were just off my gut reaction to the footage. It was about finding those smaller moments that, when placed against others, gave me the same emotion and information as an entire scene. Once I found the right pieces and placed them together it then became about refining those ideas and condensing until it fit the beats of the track. Doing that many cuts in five days can cause quite a strain and objective indifference so it was also great to collaborate with Hammock, who gave very insightful notes that allowed me to see little details that I hadn’t had a chance to fully process.

What’s coming up next for you?

Since I started doing music videos last November, I’ve had such a wonderful experience producing content for all types of artists and music genres. Working with Hammock was not only a dream job, but a great collaborative experience that I will cherish and look forward to returning to. Until then I’m excited to see what other projects the future holds. I do know that Chae Hawk and I are still ruminating on our next collaboration and focusing on nailing the right idea that can complete our little trilogy.