From HAL 9000 to Skynet and Gerty 3000, self-aware computer systems have become a staple of science fiction filmmaking for well over 50 years now. Henry Dunham, the latest filmmaker to present a vision of the future where machines with artificial intelligence pose a threat to mankind, brings us a fresh take on the narrative with tense, slow-burning short film The Awareness.

On the eve of a technological breakthrough, an insignificant janitor and a prominent engineer are faced with a decision that will alter the course of humanity: the release of the first aware computer system into the world.

Keen to discover the origins of his story and how he went about realising it on screen, DN grabbed some time with director Henry Dunham about rapid developments of technology, Terminator comparisons and a full length feature adaptation of The Awareness:

Where did the concept for The Awareness come from and how close is the final film to your original ideas?

I’ve always been intrigued by the scientific field and advancements in technology, but with this certain type of discovery on the horizon, an aware computer, it was the first time I’ve ever felt myself being frightened by that type of progress. I knew there was something in that, and once I was able to crack the story centering not around the technology itself, but the people pushing towards it ruthlessly, regardless of the ramifications, I knew that was something too important to me not to see it realized on a screen.

And honestly the film is about ninety percent of what I originally intended it to be, the only ten percent missing is just trimming the fat you can’t let go of in the writing process, which you then easily abandon once you see how boring it is to a test audience. 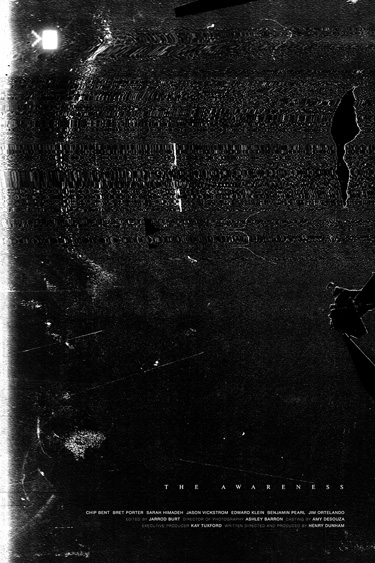 Although the concept of your film is based in fiction, the technology at the heart of the film doesn’t seem completely implausible – how much of an influence was the rapid development of technology on your narrative?

An enormous amount. I watched the documentary Transcendent Man and was just floored by the kind of progress and technological prophecies Ray Kurzweil talks about, especially the idea of exponential growth. It’s probably the only thing I can think of that’s equally exciting as it is terrifying.

There have been comparisons drawn between the self-aware computer system in The Awareness and that of Skynet in the Terminator franchise. Do you feel these comparisons are fair and how much of an influence were other sci-fi works to your film?

You really can’t help the comparisons audiences are going to make, and I’m just glad they compared it to a good movie. Unless of course they’re comparing it to three or four, in which case, we’ve got serious problems.

As far as influences go, one of the main things I set out to do with this was to deliberately avoid any of the cliches or benchmarks of sci-fi genre movies because they just feel too familiar to the audience, so a majority of the movies I was influenced by were thrillers like Rear Window and No Country for Old Men. To me, story comes first, ahead of everything, and this is a story about human imperfection, the need for significance and what it can lead to, not the nefarious technology that acts as a catalyst to unveil those imperfections.

Were you ever tempted to offer Arnie the part of the Janitor?

Every role I write is written with Arnie in mind. Especially roles primarily concerned with instructing others to promptly find the nearest helicopter.

Visually, the cinematography for your short is very dark – what did you shoot on and did you face any problems with the photography?

The look is in direct connection with the story and is only there to support the world we’re creating. It would’ve felt interesting but slightly off if we were in something super contrasting like a spotless laboratory. That’s something that always really bothered me about sci-fi is the lack of human feel in it. They always take place in these beautiful, pristine laboratories where everything is clean and it doesn’t appear to have ever been lived in. We really wanted to make sure this room felt imperfect, like people had actually been living in it, and didn’t have an army of maids cleaning up everyday.

I storyboarded most of the film prior to meeting with my DP, Ashley Barron, and once she came on board we immediately started talking about the story and the visual way to support it. Mostly through talking about ‘what’s the most simple, emotionally powerful way to get each of these sequences done?’ Through that approach we were able to find a look that was enveloping enough for the audience to suspend disbelief, but believable and relatable enough for them to identify with.

How much of that dark visual style was actually captured in camera and how much was boosted in post?

I’d say about 90% of it was in camera. Really the only thing we did in post is crush the blacks in coloring and heighten our amber feel.

What can fans of The Awareness expect to see you working on next?

I’ve been working with producers at 20th Century Fox on a full length feature adaptation of The Awareness, along with coming up with a take on one of their graphic novel properties. But on my own I’m working on a contained thriller spec that should be all done within the year. We shall see. I always say that and then it’s two years later and I’m doing a total rewrite, but that’s the way it goes.