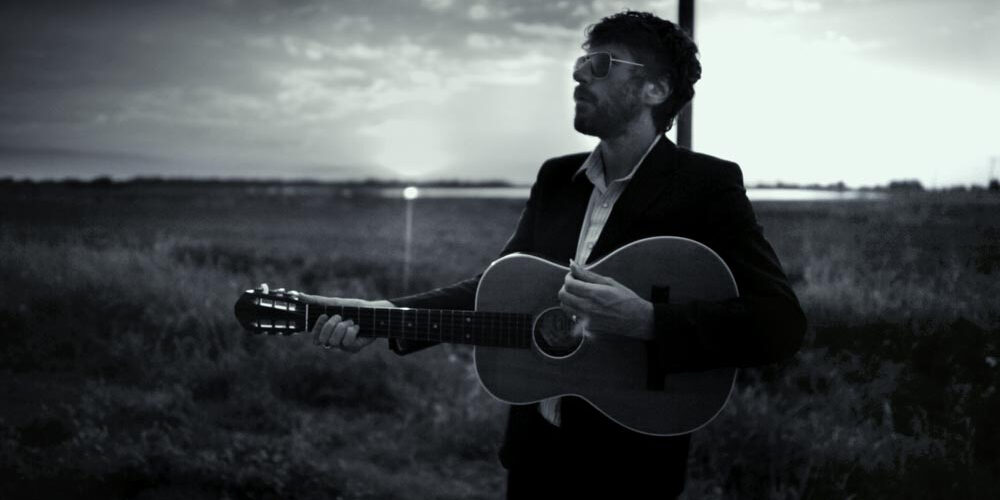 Gruff Rhys Journeys into the Transmedia Landscape of the ‘American Interior’ 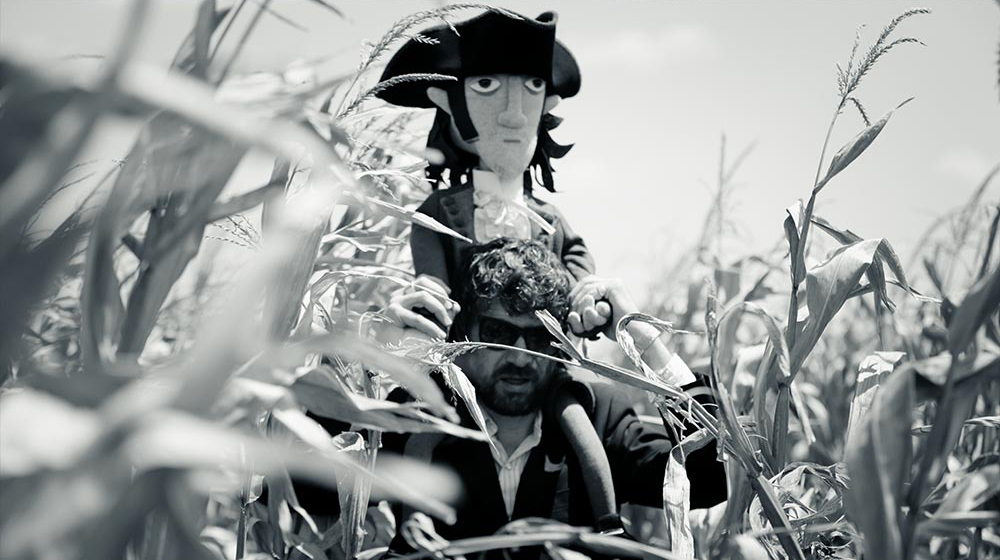 Though he would likely baulk at American Interior being described as ‘transmedia’, a term too academic and stiff for something so loose, the latest adventure by sonic explorer Gruff Rhys is an exceptional example of cross-platform storytelling where each individual element adds something unique to the whole. There’s no doubt he understands the contemporary urges and desires for creative work to exist across platforms and as ever is forward thinking in how the past can be mined for present and future benefit. Increasingly there is the air of the polymath about Rhys, although that is another academic definition he would likely shrink from in his endearing, awkward way.

Cinematically American Interior is a documentary, tour diary, concert film and road movie that includes animation and a silent puppet co-protagonist. It’s very odd but completely adorable and fascinating and anyone who was bewitched by Rhys’s previous cinemusical odyssey Separado! will know what to expect. He has delivered again but it also represents a major step forward in storytelling and in weaving formal threads together. Like Separado! this is a film about history but like his music as a solo artist and within the SFA collective Gruff is not retro, but very much forward thinking. He’s restlessly interested in how understanding the past can shape the future.

And make no mistake, in his increasingly interesting film work Gruff Rhys is as much a cultural historian as sonic explorer and he makes for an affable and engaging screen presence. He is one of us – bewildered and curious, charming, very funny. He’s never patronizing and through his integrity elevates the everyday existence of everyone he encounters. What also shines through is his patriotic knowledge. His sense of his own roots and wider Welsh culture seeps through every breathy, lilting utterance spoken or sung. Listening to him read on the accompanying American Interior app is as warm and comforting as any lullaby. 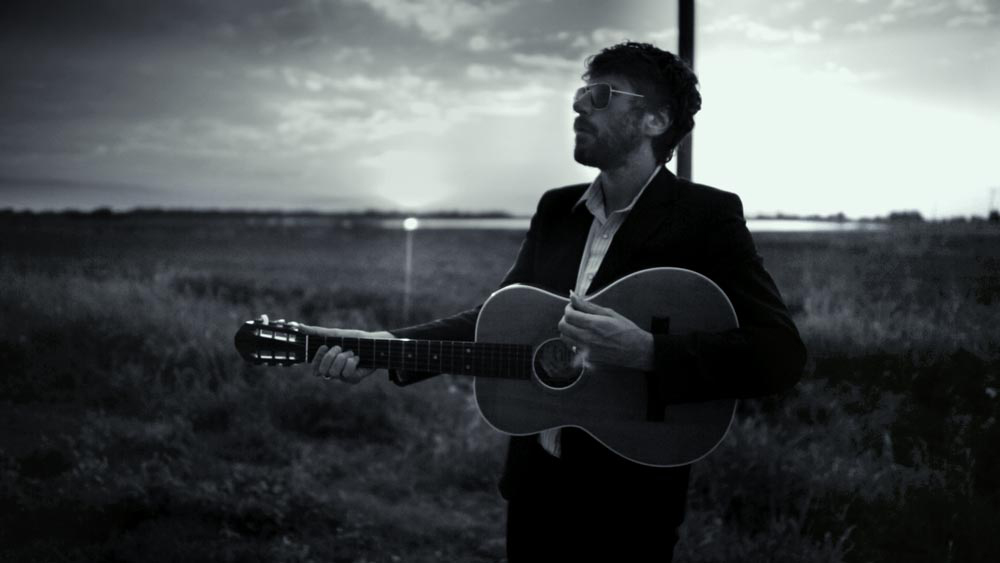 One of the most fascinating aspects of the film is how revealing it is about not only Welsh history, but also the resonant footprints of Welsh history in a global context. What of the story though? Well, Rhys embarks on an ‘investigative concert tour’ of the ‘American Interior’ from Boston to the tip of the Missouri River, tracing the footsteps of the intrepid John Evans who set off from Wales (via London and back) in the 1700s to find a mythical Welsh speaking Native American tribe. To tell more of the plot is to give away the chance to meet for the first time some truly memorable characters and learn some fascinating facts and legends.

As Rhys’s journey goes from the built up East Coast to the sparse central plains the film slowly becomes deeply metaphorical regarding Wales and the decimation of its native culture through Rhys’s exposure to the history of the Mandan tribe and Native American culture in general. The realisation hits that this is in part a cautionary tale about capitalist, neo-liberal and corporate obliteration of history and culture in the pursuit of ‘progress’. But you never feel preached to, because of the humour and of course, the brilliant, sublime music. Despite all these other elements you never forget Gruff is a songwriter and music is his ticket through this crazy lost world.

The creative journey undertaken also has strange parallels to the art of cinema itself. The story of John Evans comprises largely of myth, legend and hearsay requiring history to be (re)created on screen. As a result of this process the myth becomes truth or reality as by virtue of cinematic translation myth can become a type of fact. This is apparent in the physical ‘casting’ of John Evans in resplendent felt when no visual record of him exists. Now, he will forever have an identity, one beautifully crafted by artist Pete Fowler and ‘felt mistress’ Louise Evans. When we think of Evans we will see these artists’ visual representation and artistry in the same way when we may ‘see’ Jesus as Willem Dafoe, Jim Caviezel or Robert Powell.

The felt John Evans appears heavily in the film and the attendant app, acting as a stoic guide for us as we follow his trail. His story is told visually across these forms and also sonically and lyrically in the musical accompaniment that Gruff has written, performed (and recorded in part) on that very trail and recollected in the book. Unlike a large number of cross-platform cash-ins each element to the American Interior story is artistically essential due to the quality, craft and invention displayed within each form. The app is a true extension of the film. It reminds us of what we have seen and is aesthetically gorgeous and ‘on brand’ but crucially it adds to what we have seen. There is a vast array of information that isn’t in the film, Evans’s and Rhys’s journey is made clear and exciting to follow, the behind the scenes footage, extra interviews and production stills are thoughtful and interesting and there is footage that isn’t in the film. Conor Oberst makes an appearance in the Nebraskan section on the app, which is heavily expanded here compared to the film. Also, the app allows Rhys to add some context to the film and some of its creative decisions and to display some of the depth of his film knowledge and history as he discusses Westerns including Arthur Penn’s superb (dismissed somewhat by Gruff it has to be said) The Missouri Breaks and reflects on the parallels between Evans and Sly Stallone’s Rocky, on the famous steps in Philadelphia of course.

The Film, the LP, the App, the Book – all part of the same story and thankfully it’s a great story and a fascinating journey. At its heart it’s a project about journeys and the value and power of them. American Interior reminds us that success and/or life is a journey, not a destination. The end result and indeed the ‘truth’ are irrelevant. It’s not about finding the Welsh speaking Native American tribe, it’s about remembering there is always something to be found along the route, even if we are headed to something we know may not exist. We should never stop searching.