Bubbling over with the artist’s energy and laced with dark tones from his troubled past, director Norton’s FX-laced video for Detroit rapper Danny Brown seems to perfectly encapsulate everything the musician is all about. Centred around an effervescent performance from the artist as he takes us on a trip through what the director describes as a “ghost of his past”, the promo for track 25 Bucks is one of the music videos you’re going to want to watch over and over again.

Eager to discover more about the experience of working with Danny Brown and reveal the production process behind his impressive FX work, DN got in touch with Norton to find out more:

How did the Danny Brown collaboration come about?

My rep Jamie Rabineau at LARK sent over the brief. My treatment was the favorite and I got the job.

Where did the concept for the video come from? Was it inspired by the track or did you have it in mind before you heard 25 Bucks and adapt it for Danny’s track?

The concept came from the song, for sure. But the execution of the idea came from my desire to work with a motion control rig. I actually got a demo for a rig but in the end we actually used a different technique, which was a lot smarter approach. But the motion control thing was the catalyst.

He would just smile and say: “tight, tight.” He was down with everything.

How did Danny react to the concept of the promo? It seems like quite a personal narrative for him, was he cool with it? Were there any moments you thought you might be delving a little too deep into his past?

Well, there are layers of people between me and Danny, we only got to hang at the shoot. From what I reckon, he really enjoyed the concept and every time I’d show him what the next scene would be like, he would just smile and say: “tight, tight.” He was down with everything.

To me a good video should really only have a single visual concept that it would be known for. 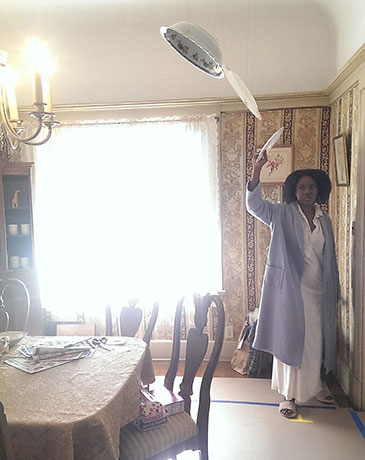 Behind the scenes photo of wire work in 25 Bucks

I suppose everyone who watches the video probably asks how you achieved the impressive FX work, so not to disappoint…can you talk us through how you created the time-freeze effect that features in the promo?

Ha! Of course. The effects in the video are a combination of practical effects (done on set), like the hanging plates in the first shot, or the floating pillow, whose wires were removed in post, together with CG elements that were created, match moved (3D tracked) and composited in the scene to look as if they belong in it, like the dice, the majority of the bills in the end shot, and the smoke and ashtray.

Visual FX seem to play a large part in your productions, do your concepts tend to spring from FX ideas or vice-versa and is getting the balance between visuals and narrative something you sweat over?

I think that knowing how a lot of the VFX shots are achieved allows me to dream big and also strive to have at least one shot in a video that people go: “how did he do that?” I look at an idea and think: “what would be the most impossible looking way of presenting this?” which always results in intense VFX work, but when it’s finished, it’s very rewarding. The visuals come first and then I try to come up with an interesting narrative that drives them. But as soon as a second visual gag that’s far off from the main concept comes to mind, that’s when I stop myself and start over. To me a good video should really only have a single visual concept that it would be known for, like “the one with the frozen scenes” or “the one with the possessed pair of shoes.” It’s a challenge to keep a visual concept interesting for 3-5 minutes, but that’s something I try to achieve. Keith Schofield is a master at this, for instance.

A behind the scenes look from the same production

I’m about to start post-production on a music video I just shot in Portugal and I’m also developing a very special feature length documentary, that’s long overdue. And that’s all I can say.