Having first featured on DN over 2 years ago with his promo for American folk band Bowerbirds, a search for the name Carlos Lopez Estrada on our site will now take you to an archive of articles 13 deep (14 if you include this one). Having become familiar with the director’s work over the last couple of years, it would have been easy for us to become somewhat accustomed and numb to his films…thankfully, Carlos’ inventiveness and desire to continuously challenge himself has meant this has and most likely will never be the case. Proving once again what a unique filmmaker he is, Estrada is back with his latest project, a music video for rap trio Clipping, which the director hopes is as unpleasant as it is compelling.

Whilst we were interested to find out how the promo came about during our chat with Carlos, the main question burning in our collective brain was of course, was it really shot in just one take?:

I am a big fan of Clipping and was really excited to make a video for their upcoming album, which I think is one of the most incredible things I’ve ever heard. I know it’s a crazy thing to say, but I really do think so. They have a very non-traditional approach to the way they make music and I knew from the very beginning that we needed to make a video that was very different to anything I had done before. The song we made the video for is probably their most digestible track, but anything else you hear from them requires a certain kind of predisposition that I don’t think a lot of people can commit to easily. They use sounds that are normally considered extremely aggressive and arrange them in ways that are so intricate and so artful, that make you forget the fact that you are hearing such harsh noises. It’s strange and really beautiful. My intention with the video was to attempt to create an experience similar to the one I had when I listened to their music for the first time: An image that is as horrifying and unpleasant as curb-stomping, but presented in a way that is compelling and hopefully even pretty.

But long story short, I sent them this photo of myself explaining this would be Daveed on a curb, and they emailed me back saying “Love it. Let’s do it.” 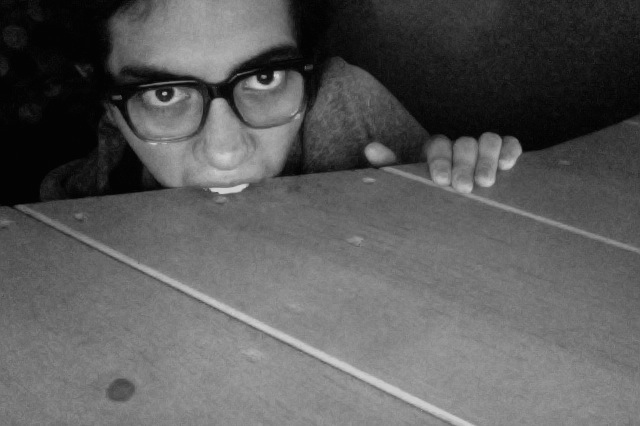 We were very close to scrapping the 1 shot idea more than a couple of times during pre production…but I am very glad we didn’t.

I think that by agreeing to make a 1 shot video you are already giving up certain obvious liberties that being able to edit offers. It just becomes a question of whether the compromises are worth the 1 shot experience, and in this particular case, I think they were. It looks like a pretty simple shot but there were actually a lot of people running behind that camera, a lot of cues and many variables that needed to work perfectly for the shot to be usable. We definitely didn’t get a “perfect” take, but as soon as I was able to embrace the imperfect nature of the project, I realized that we had accomplished something unique.

I am proud to say that this was actually accomplished in 1 shot. There are a few post effects throughout the video, but no hidden cuts anywhere. The most challenging gag was probably switching Daveed (lead singer – hands tied behind his back) for a headless dummy (with a porcelain base in place of a head) that would get stomped by Cree and smashed, letting out the rats from a pipe that traveled from the neck of the dummy and out his butt (out of frame), where our animal handler was pushing them out of the pipe with a plunger (very gently). That probably makes no sense on paper, so here is a sketch:

I just finished another music video that is very different from this one. It’s for a band from Boston called Faces on Film. I think it will come out sometime very soon. [sooner than we expected – you can see the already ‘Staff Picked’ video below] It has some colorful animations.