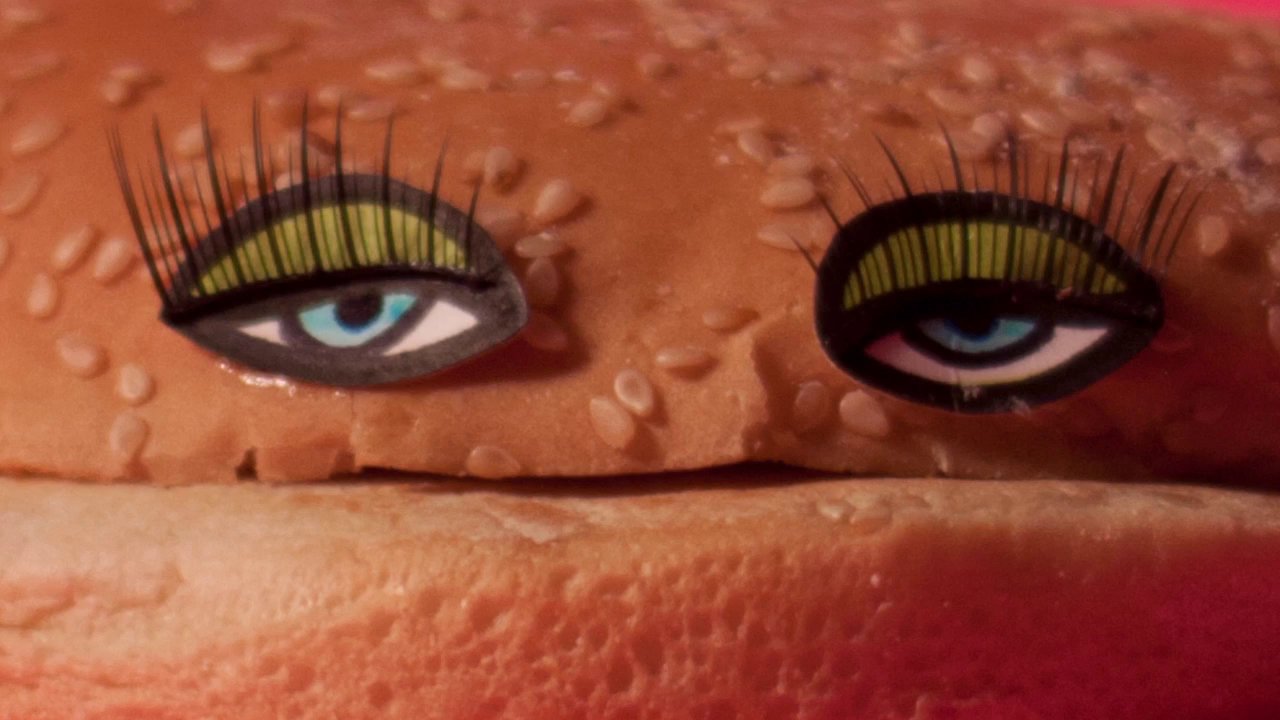 Inspired by the story of hip-hop heavyweights Drake and Lil’ Wayne, Julian Petschek’s Butter Ya’Self introduces us to the rapping prowess of ButterKrust, Nana Splits’ & Sweet Cream. Determined to unravel just what the fuck is going on in his latest animation, Jeanette Bonds spoke to director Petschek to quiz him on his influences, collaborators and animation cameos.

How did you come up with the idea for Butter Ya’Self?

That’s me in the back grilling sausages, which I was going to feed visitors during the reception. Somehow this turned into a rap video.

Sounds like you have a thing for personified foods, what is your method for assigning characters to food products?

For this project it was really important that the two main characters have obvious sexual counterparts – ButterKrust has hot dogs and Nana Splits has peels. That enabled me to play with their gender in a fun way. Sweet Cream was originally a sausage named Phatty Acid but I couldn’t cast a realistic enough looking sausage so he got replaced by a stick of butter which was way easier to make. Other than that the background characters are kinda random – my sister in law made the honeydew grandma and like – there’s no logic behind that, it’s just funny. 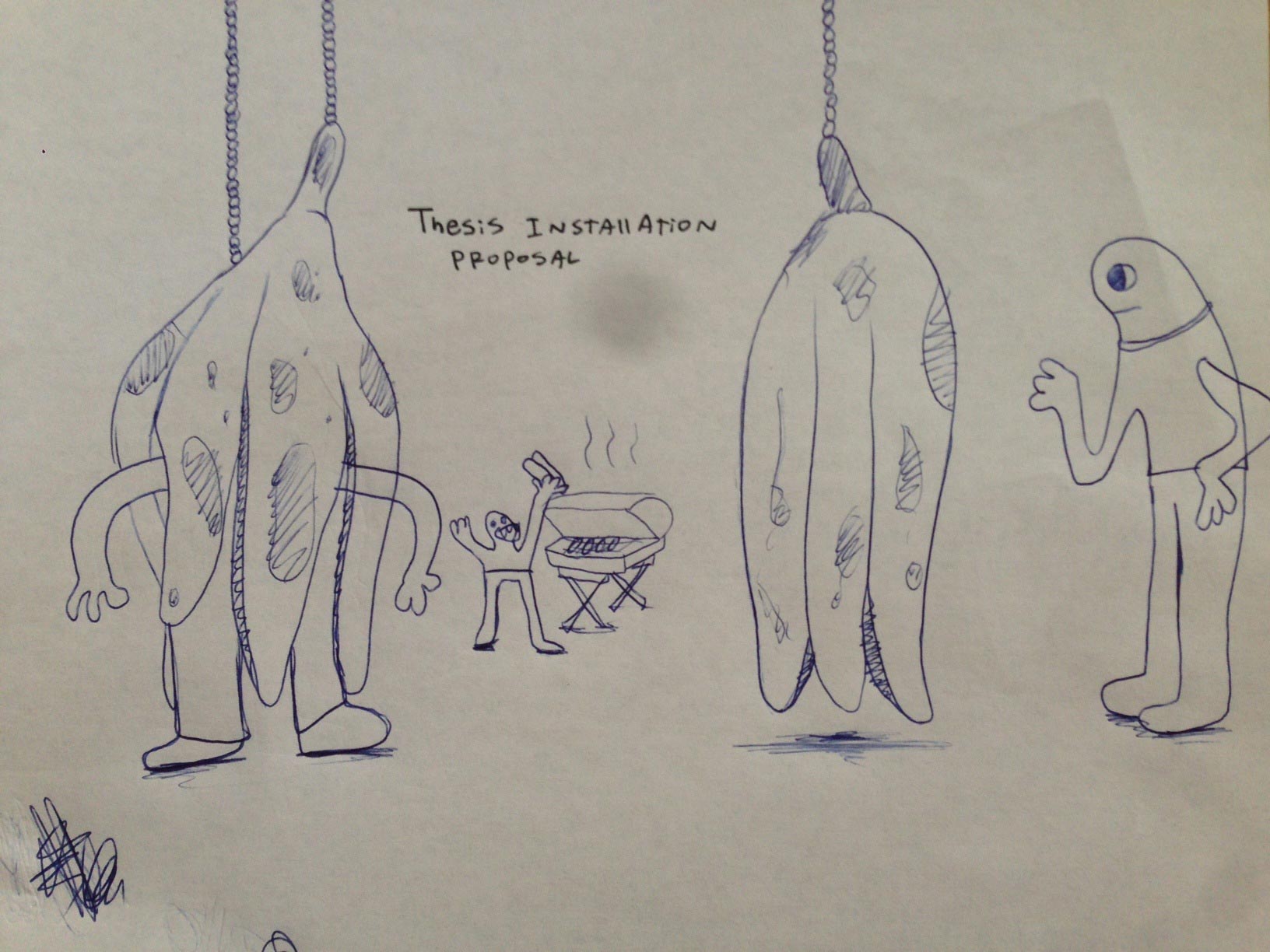 Do your characters have a back story? If so, what is it?

I was really paranoid the whole time that I would accidentally make a parody rap video.

I noticed that you borrowed a lot of elements from Drake’s music videos like the title font, the black sliding doors and the shots in front of the bridge. How would you define the relationship between your film and real rap music?

woah I’m really impressed you picked up on all those references – I totally stole things from the video for HYFR and The Motto. I was really paranoid the whole time that I would accidentally make a parody rap video. I hate parody rap videos. I also hate comedy rap, comedy music, basically any music that has more comedic merit than musical merit – I hate that shit. It was really important that everything feel real. The song feels real, the characters feel real, and the music video feels like a music video that the Omega Millionaire Record label would release. I approached the visuals the way I think a director would have approached visuals for a song off of an album like Deltron 3030 – which is a concept album that takes place in the future and has intergalactic rap battles and songs about computer viruses. Concept albums are their own thing in hip hop, and most of them take place in outer space. I see what I created just like those but instead of outer space it takes place on a kitchen counter. Obviously it’s different because my rap group doesn’t really exist, but I still see it occupying that space in the hip hop world.

Is your music also influenced by Drake? What was the process like of writing and creating the song?

I am way more influenced by early Lil Wayne – like Tha Carter II, Da Drought III, and all the unofficial Empire mixtapes. I got really into Danny Brown right when I was making the song so his style of beats also influenced me. I basically stole one of his hooks – the one that samples Outkast – it goes “dip I dip you dip, dip I dip you dip I dip” with a low pitched voice, which is almost exactly what mine is. I also write with the same method that Lil Wayne uses – basically you don’t write anything down you just record a line, then you play it back until you think of the next line, record that and then play the two together until you think of the next line etc. It’s a lot of fun. The most exciting part of the whole project was when I involved these two amazing rappers to do the vocals. I brought this dude Jake to the studio and gave him a sandwich, the beat and the lyrics and he recorded the whole Nana Splits verse in one take, it was amazing. He also came up with the name Nana Splits and modified some of my lyrics, that was tight. With Katrina I had to pull her teeth to work on this project cause I made this really nasty gay rap song a few years ago and she thought I was gonna make her say weird shit. So the only way I could get her to work on it was if I let her write her own verse which ended up being a really good choice anyways. We sat in her living room with the beat looping while she had her face in her iPhone and her thumbs going crazy and every once in a while she would look up and ask me a question like “can bacon bits be money” and I was just like “yo hell yeah bacon bits can be money!!!”. she wrote and recorded that verse in less than an hour, it was amazing to witness. She also came up with some of the gestures, like “heres a crumb”, she totally painted that picture for me.

Did you have any other collaborators on this project?

For sets and props I hired a sexy babe named Ambar Navarro. She made the living room set and the musical instruments and basically like anything that I needed she would just make super fast – like the coffee mug or the Gin n Tonics. I could not have made this film without her. I also had a ton of help building things from all my friends. My BFF Tempe Hale made the Ritz cracker hotel, my friend Lizzy Klein painted ButterKrust… my mom made Nana Splits’s gold chain… the list kind of goes on forever. You cant make a stop motion film alone, and I love that.

If it’s an important shot I will plan it out completely on paper before I even touch the puppets. For the rest of the shots I just make up the movement as I go along. I like both approaches. What usually happens is I will plan out a shot and then not look at my plans while I’m actually animating, but somehow it’s still helpful to make the plans.

Could you share the sketches from one of the shots you planned out?

Here are the thumbnails from the beach shot where Nana Splits is like, “chilling with a bottle, the bottle, from Bottle!”

I was determined to make this shot tight as fuck because I was really nervous that the bottle cameo was a stupid idea. In the end it’s one of my favorite sequences and I think the intertextuality thing is really interesting and should be done more often by independent animators. Half the lyrics in any contemporary rap song are about other contemporary rappers, I think that attitude applied to the animation world would be awesome and make all of our Vimeo feeds way more interesting.

Is that really the bottle from Bottle?

What are your hopes for the video once it’s released?

I want Danny Brown to see it and call me and ask me to make him a music video.

Do you have any future projects planned?

My next project is called Backpacking (travel). It’s about the differences between backpacking and camping.