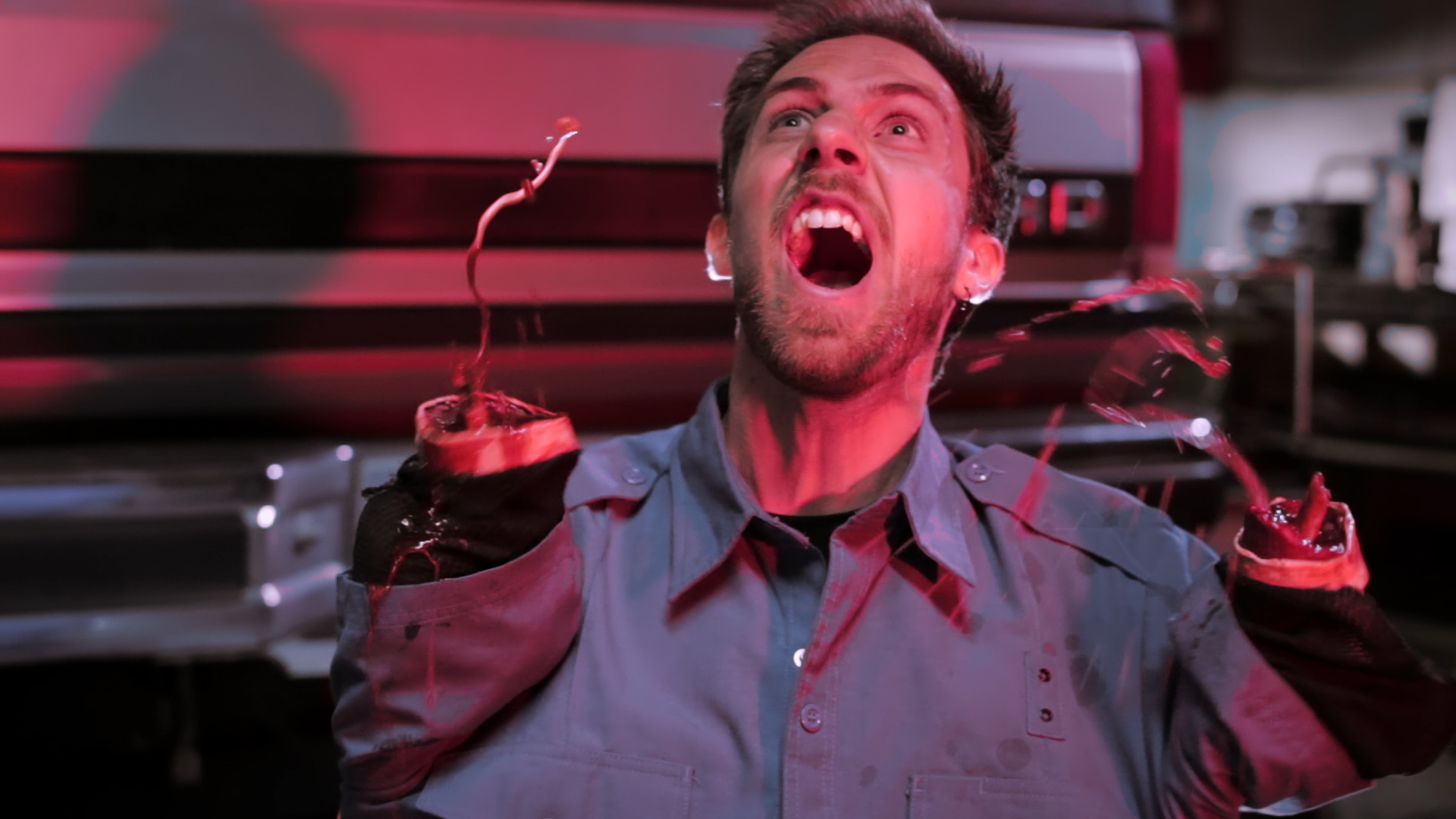 Soaked in blood and splattered in entrails, Pleasure Kill’s music video for Psychic Rites track Singularity is no ordinary music video. There’s no glossy performance sequence. No fireworks. No scantily clad dancers. Instead, the creative duo of Mike Wilson and Mike Siemens set out to give us a story-based promo full of killer cars, physical effects and buckets of blood. Eager to discover how the production team came up with their concept and how they went about creating the gory visuals, we spoke to Mike Wilson about their approach to the video.

I’m going to start this interview with a question in the style of Arnold Schwarzenegger …Who is Pleasure Kill and what do you do?

We love Arnold Schwarzenegger! The opening scene in Commando, the montage with him and his ‘daughter’ eating ice cream and petting a deer is one of our many favorite Arny scenes. We watched that scene while Mike and Laura Siemens made a cast of my hand for the Singularity video.

Anyway, Pleasure Kill basically started because Mike Siemens and I had an overwhelming need to make stuff that doesn’t suck. Mike Siemens is also the lead man for Psychic Rites. Pleasure Kill is still developing, basically our company is going through puberty. Our main objective is to make high quality content that we thoroughly enjoy. Our focus is on quality over quantity.

The technology of today presents a challenge to filmmakers.

With today’s ease and availability of cheap high quality video cameras, it is almost too easy to make a video. Now we’re not complaining about that, but it presents some quality control issues. Because enthusiasts can make a reasonably ‘professional’ looking video with very little thought put into the product before they start shooting. And that bothers us. We want people to consider what they’re making before they make it, so there is a clear intention behind every video. That’s what we did with Singularity and that’s what we intend to do with future Pleasure Kill projects.

How did the opportunity to work with Psychic Rites come about?

I’ve known Mike Siemens for quite sometime, long before he was helming Psychic Rites. We’ve both inspired each other over the years creatively, so it was exciting to finally work on a project together. We both know what we’re capable of creatively and we trust each other, which makes it much easier to do ground breaking things. That’s half the battle, because there are always people who know how things have been done in the past and they think any new idea is just stupid, so not having to fight an uphill battle and have complete support made this project a dream to work on.

The ultimate goal for any media is storytelling.

During our email conversation over the last couple of days we talked quite a lot about narrative approaches to music videos, what made you want to apply a story based video to the track and where did the idea for the narrative come from?

In general, I really dislike performance music videos. I think it’s a very tired and boring format. Also, I think the ultimate goal for any media is storytelling. That’s what keeps people’s attention, that’s the thread that ties it all together. Also, if you have a story, it’s much easier to explain your idea to other people. Your elevator pitch suddenly grows wings.

Psychic Rites gave me a sort of brief for the Singularity video saying he wanted flesh and metal to be moving and fusing together. I listened to the song and I loved it, the song is very dark and brooding. But I didn’t want to make a video that would take itself too seriously, because anyone taking themselves too seriously is making a huge mistake. So I listened to the lyrics and the tone of the vocals and imagined that my 1986 Ford Tempo was singing this song to me and that thought made me laugh. I basically re-imagined the Tempo as a stalker who no one recognizes, not even his owner. The car is in love with his owner and feels like his owner has broken up with him by selling him, and so he acts out in the most noticeable way possible, and destroys everything his owner loves. Because there is a killer car involved, and it’s inspired by 80s horror, the Christine reference is unavoidable, but we were more inspired by David Cronenberg’s movies such as Videodrome. Mike Siemens completely nailed the special effects and the beating heart inside the Ford Tempo is one of my absolute favorite scenes from the video.

Budget dictated a lot of things, because we didn’t have a budget.

Lets talk about production – how long did you shoot for, what cameras did you use, how big was the crew?

From pre-production to final delivery, the entire project took about 4 months worth of weekends. The majority of shooting was done in March, with additional pick up and insert shots occurring along the way to final delivery. We had a very small crew, typically between 2-4 people not including talent. Mike Siemens and I were always on set, sometimes we were the only ones on set. I directed and operated camera. Mike Siemens’ main job was special effects, but he did everything in between from gripping, to lighting, to stunt driving. Our wives would sometimes come out to help and support us. Another key player was Emily Dokken who did grip & lighting on set and also did some VFX shots.

We shot on a Canon t3i with Rokinon cine lenses, 16mm & 35mm. We also used the tested Magic Lantern firmware and shot using Technicolor Cinestyle picture profile, which helped with color grading later. Before editing, all footage was de-noised and saved to 10 bit ProRes 422 HQ, which also had a dramatic effect in getting the most out of our footage. We also used a gopro for a few of the more challenging car angles.

The film appears to use a combination of physical FX and CGI FX – why did you adopt this approach and how did you decide what to do in camera and what to do in post?

Well, budget dictated a lot of things, because we didn’t have a budget. So the general rule was spend as little money as possible to achieve the maximum effect. Mike and Laura Siemens have experience making prosthetics on the cheap using home made silicon, latex or even wax, so that was extremely helpful. I believe Laura S found a back massager at a thrift store and dismantled it to create the heart pumping illusion. It made sense for the gore effects to be done practically, because it’s simpler and more visceral. Also, anything that can bring our project remotely close to Rick Baker’s effects in Videodrome was alright with us. There are no 3D elements used in the video.

The crashed Ford Tempo driving down the street was done by going to a junk yard and finding an identical hood and a few other car parts. Emily Dokken did the VFX for the totalled ‘new car’ and created the effect digitally in Photoshop. The license plates were an after thought and were done in post using Photoshop and After Effects. Also there are some license plate nuggets in the mechanic shop in the blowtorch scene if anyone wants to put on their glasses. The car crash into the pillar was shot in reverse and then speed ramped to make it appear faster. Also some dust and particle elements and camera shake were added to sell the effect.

The heart explosion was a combination of composting and practical effects. We scored the heart to ‘explode’ and put a balloon inside of the cavity, when the balloon inflated, the heart would swell. Then we popped the balloon and used monofilament to pull the heart apart. The string was taken out in post. That effect ended up looking ok, but because we used a balloon to blow up the heart, there was nothing inside after it exploded and nothing really exploded out of it. It just kind of popped. So all of these elements had to be added with a separate green screen shoot where we basically setup a green screen in my backyard and tossed ‘guts’ in front of the screen for a couple hours.

Also, Action Essentials 2 really helped us save a lot of time and blend our composites more seamlessly with a lot of our VFX shots, including the heart exploding shot, we used Action Essentials to add sparks, dirt charges and fog.

What do you think the physical FX add that CGI wouldn’t have been able to?

We didn’t use any digital 3D elements in this project, but I think 3D has very useful applications, depending on the nature of your effect, it can be more practical and just as good if not better than a ‘practical effect’. But for this project it didn’t make sense, it would’ve been too fake, meaning fake in the wrong way! It would’ve been too ‘shiny’ to use a technical term.

I think the question everyone wants to ask is…what the hell was in that prosthetic head?

Mike S: Stuffed inside my fake head were a mixture of home made blood, overcooked oatmeal and to top it all off 3 whole pig brains I obtained from a local meat packer. They could only sell me a box of twenty brains so I ended up with a freezer full of them and now don’t know how to get rid of them – they smell really distinct. I wanted to get some cow eyeballs or something and try to get them to squirt out of the eyeholes but apparently it’s illegal to sell/purchase eyes in Oregon.

What are you working on next and when can we expect more blood and brains?

Our next project will not be a gore fest. It’s either going to be a mock infomercial for a ridiculous yet real product that we create or another music video. We have about a bajillion ideas on our Google Drive, so it’s really just a matter of what’s right for the next project, how affordable it is, and how fast we can complete it. We think gore can be really fun, but we don’t want it to define all of our projects.