If you think you have the triad gang story down pat, then think again. In Get Better Boss for Deech’s Comfort EP, director Henry Kaplan delivers a contemplative tale of an ageing gangland boss battling to see out his final days with the stolid strength and dignity of an old time Western hero, whilst disrespectful upstarts vie for his soon to be vacant position. We invited Kaplan to take us behind the scenes of Get Better Boss’ production and share his journey to the best cut of the film and why a good credit history is the indie filmmaker’s best friend.

The project really started two years ago when I cold emailed Deech. I had heard his Urnite EP — which was released on Slugabed’s label Activia Benz — and, in short, I was blown away by his music. It was the sort of thing where I felt really inspired, saw all sorts of narratives in my head while listening to his stuff, and thought that it was important to try and make one of these narratives a real thing. So I got in touch with Deech, he liked my work and we decided to move forward with it. For about a year, he sent me demos of all his new tracks, which I really loved, but none of which really struck me as “the right one”. I was sort of spoiled in this sense — he was down to let me pick which track I’d make a film for. Finally, he sent me a track called Pirogi (which means something in Belarusian other than a dumpling), and I was hit with the story idea for Get Better Boss based on that. I whipped up a treatment, Deech loved it, and so we went into pre-production right away. I’ve been asked by a lot of people what the writing process was like for this. I’m a big fan of both old Westerns and Hong Kong gangster films. So I really didn’t have to dig too deep to come up with the idea.

I assembled several of my filmmaker friends in LA and we got to work. I had some awesome people producing the film — Maegan Houang, Penelope Essoyan, and Josh Gordon — all buddies from college (Wesleyan University in Connecticut) and regular colleagues on these sort of projects. Collectively, we have a lot of experience making low-budget short films and music videos, and this would be our biggest one yet. We spent about 4 months on pre-production. Deech was in no rush to release his EP, and given that the core crew all work day-jobs and this video was largely self-funded, the time was both a luxury and a necessity. For every aspect of the video, from script to production design to casting, we had time to scrutinize and figure out the best and cheapest or free way to execute.

A bulk of pre-production time was spent in casting. We obviously needed a ton of actors, so this was an extensive process. We put out several casting calls in LA for anyone of more or less “Chinese heritage” and “preferably with tattoos”. We ended up meeting tons of amazing Chinese, Vietnamese, Korean and Malaysian actors, and lucked out that a few of them actually spoke Cantonese (the language of Hong Kong). Early in our search, we met with a guy named Nathan Truong. The dude came into the audition and was just incredible, shockingly real and authentic. I noticed he had a tattoo popping out from under his shirt sleeve, and asked him about it. He mentioned he had other tattoos, and pulled up his shirt to show us. He was reluctant to really talk about it, but he explained that he used to be in a Vietnamese street gang in Orange County, but was totally out of that world now. Nathan ended up playing the “Underboss” of the Hai San Gang (he’s the dude saying “You wanna fuck with us?” at the beginning of the video). And as you can see, he’s incredible. 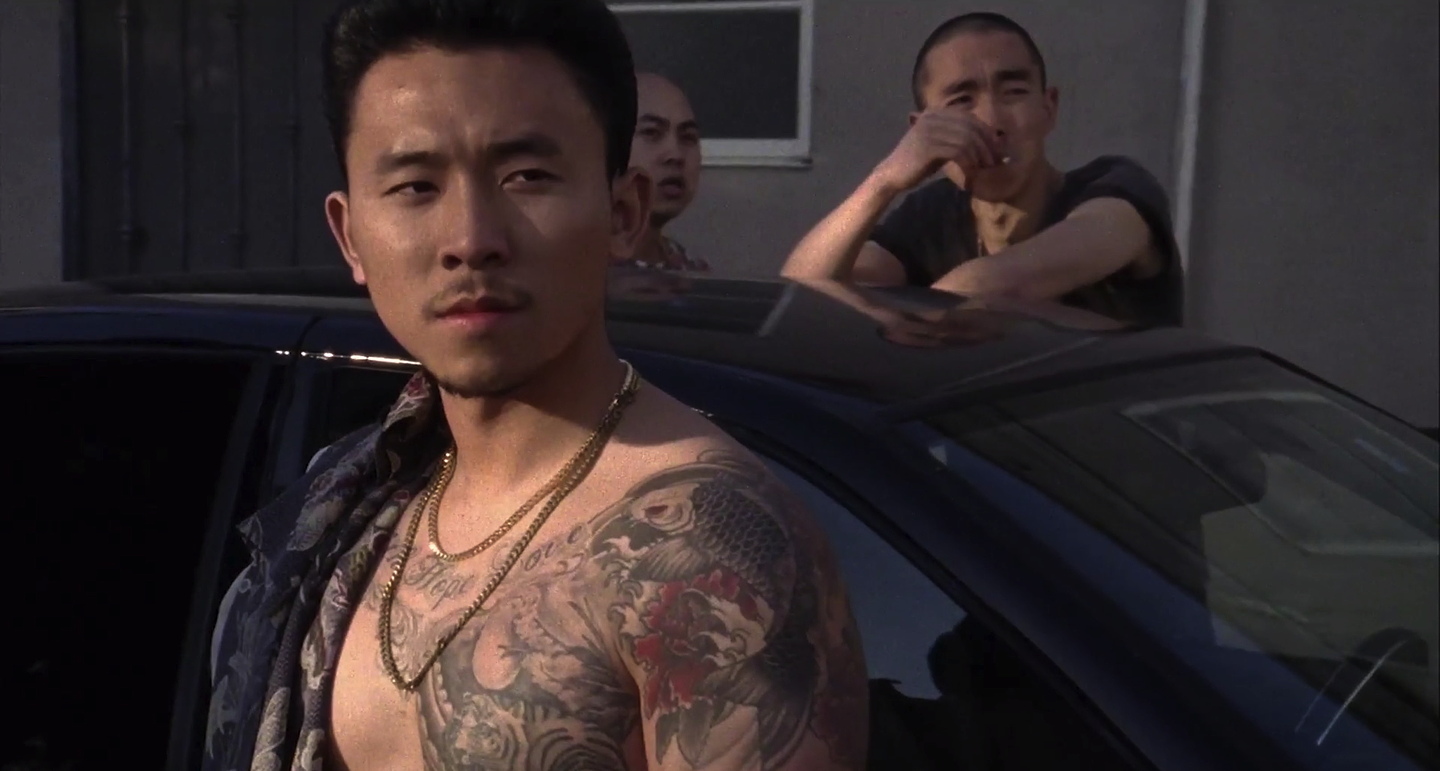 Nathan also became completely vital in our casting of the hardest part in the video, that of the Boss. There’s a scarcity of age 50+ Chinese actors in LA, and I knew that this guy would need to speak Cantonese, so that made the search even harder. Nathan suggested an old real boss of his from his job as a security guard, a guy named How Chung. How was a non-actor, but Nathan was certain he was perfect. There was no real audition, we all went out to eat at a Dim Sum, and his look and enthusiasm for the role made it obvious that he was our guy. He also was, in real life, a sort of fatherly figure to Nathan, and that dynamic would be really valuable for both their performances. I tip my hat off quite a bit to How. He’s a very shy guy, who had never acted before in his life. But he felt like the project was important for him to do for just this reason, to break out of his usual self. Obviously, it turns out he’s an incredible actor. So that was really gratifying to be involved in.

We rehearsed a lot. For several months before the shoot we’d meet up once a week and just go over a chunk of the video, talk out what each scene was really about and what the back stories were. I did a bunch of rehearsals with just Nathan and How, some with just How and the wife character (Julia May Wong), and others with the separate gangs and everyone all together. Part of the rehearsal process was doing scenes that weren’t necessarily going to be in the video, just bits of character stuff where the actors would improvise and see where it led them. I wanted these guys to play around, have some time and freedom to really get into their characters. I think this strategy paid off quite a bit.

I wanted these guys to play around, have some time and freedom to really get into their characters.

One of the Hai San gang members was played by a guy named Phi Truong — he’s the younger bald guy. He was perfect in his audition, and he mentioned to me that he lives in Westminster, CA, which is a largely Vietnamese section of Orange County. It’s known as “Little Saigon” to most people. I had already been scouting a bunch of places to shoot in the area, and asked Phi if he didn’t mind showing me around his neighborhood. Phi was very down, and ended up hooking us up with many of the places where shot. We didn’t spend a dime on locations or permits, and this was almost entirely through Phi’s know-how and ingratiation in the community.

Early on we had a great production designer attached to the project, but he ended up bailing a few weeks before our shoot. Maegan, one of the producers, stepped up and took over production design. She’s the one who really got me in to Hong Kong gangster films, and knows the aesthetic better than I do. So it made sense. She really hauled ass the last few weeks to get everything together. Maegan, Josh and I all live together, and so we filmed all the “home” scenes at our house. It’s an old place in Silver Lake, Los Angeles, with a pretty unique color scheme, so we just kinda used it. We got a lot of cheap set decoration stuff off eBay (which we later sold off), and “rented” quite a few items (bought and returned). The only advice I can give to other indie filmmakers is to have really good credit. Particularly in the wardrobe department, most of what you see on the screen was bought and returned. Some consider this practice to be “wrong”, but I think it’s just playing by the rules of the game.

The DP is a fellow named Daniel Lynn who was introduced to me through another DP I’ve worked with, and this was our first project together. I knew that I wanted to shoot this on film from the get-go, to achieve a sort of late 80s/early 90s Hong Kong cinema look (back when everyone shot on film). We ended up shooting Super 16mm, using Kodak 7219 Vision3 500T, on an Arri SRII. I showed Daniel a few different films as reference, the most important being Election (2005, dir. Johnnie To) and Sonatine (1993, dir. Takeshi Kitano). Daniel is incredible, and was able to really nail the aesthetic.

The shoot consisted of two back-to-back weekends. Even with this much time, it was a very quick shoot. We probably averaged 20 minutes per set-up, and there were company moves on most shoot days which ate up significant time. Daniel and I tech scouted and planned out everything for months in advance, so there was a minimal amount of decision-making on set. This is true for pretty much every aspect of the video. Pre-production was a big rehearsal for every department, and the shoot was our first and final performance.

We shot the film in January of 2014. All in all, I spent 5 months editing the project, which is crazy, but I think ended up being really important. It took me 2 months editing on nightS and weekends to get a rough cut I was happy with, and then spent about 3 months of fine-tuning after that. I was mostly concerned with the length of the video — the rough cut was 7 minutes and 10 seconds. This just seemed way too long to me. I was hard-pressed to believe that anyone would really watch a 7 minute video for a Belarusian DJ who most people don’t know about. So I spent 3 months whittling away the intro and experimenting with the structure of the entire video. I eventually struck something I thought was undeniably the shortest and best version of the video, clocking in at 6 minutes and 48 seconds. I still wasn’t sure why anyone would spend that much time with such a random film, but I at least knew it was the best possible version of it.

I was hard-pressed to believe that anyone would really watch a 7 minute video for a Belarusian DJ who most people don’t know about.

After we finished sound editing/mixing/color correction, we sat on the video for about a month while Deech prepared his EP for release. We ended up premiering the video in late August, first on some Russian and Belarusian music blogs. It got a great response in that part of the world, and a few days later sort of caught some traction on the English speaking internet. We were written up on some “Best Of” lists, and people seemed to connect with the film. As with most filmmakers, we were all really surprised by the positive response. I was frankly unsure if anyone would “get it”, so to speak. But it looks like they did.