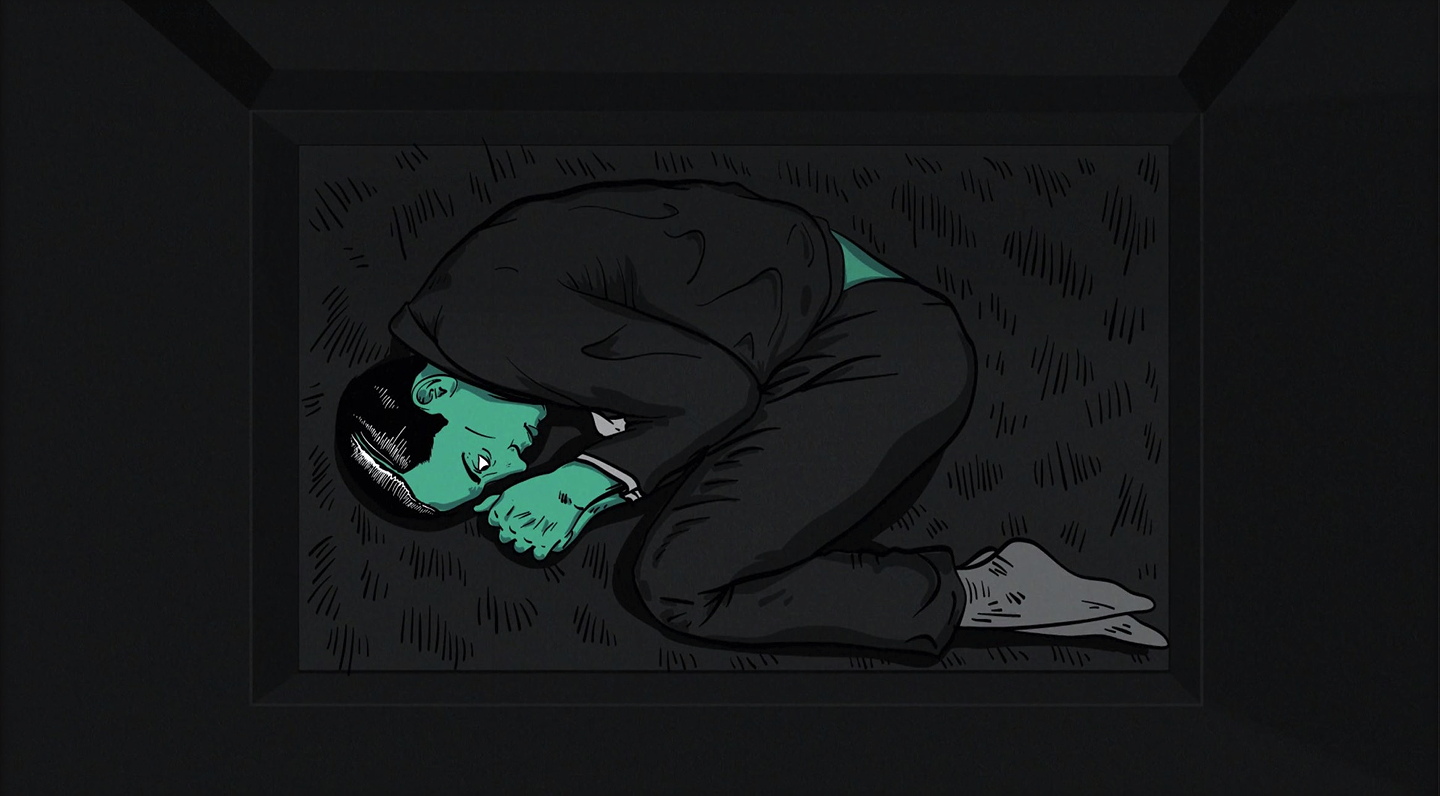 If all the world’s a stage, then it’s safe to say that we slip on a multitude of masks as we perform for the different audiences we encounter throughout life, and in Raphaël Bluzet and Yohan Quintar’s provocative animation IN, we get a peak at the broiling obsessions and torment which lay just beneath those ever-shifting facades. We invited Bluzet to tell us about his love of placing attractive images in awkward moments and how he and Quintar went about creating their own individual style by employing a fucked up aesthetic.

Yohan Quintar and I have known each other since the school yard, (more than 20 years) so it all started with a cohesive friendship. In our careers we’ve developed complementary skills individually while also sharing the same sensibility. Yohan is an illustrator, he has always drawn. For my part, I’m a freelance motion designer. We are hands-on as far as we are creative – we are independent. Our goal is to build are own imagery. We enjoy the aesthetically pleasing, but also like to provoke and disturb by offering attracting images in awkward moments. The initial idea for IN was to transcend the mask through animation, revealing madness and all the spiritual things we want to hide. In society, with family, friends, or at work our behaviours are quite different, that’s why we are all actors. In old films, actors are usually inhibited as in our occidental society. Here, animation has a disinhibition role. When Keaton exits his briefcase, he enters his subconsciousness. We wanted to illustrate madness as an explosion of colors, by opposing it with the silent black and white sequence which hides something. So in this cartoon, animation works on one narrative level and the film footage works on a different one – in this sense it’s an experimental film.

We needed to prepare before producing IN, so we used classic processes starting with brainstorming. Then we wrote a script and we later executed an editorial script. Before creating any of the visual elements we watched documentaries about crows, stags, etc… in order to more accurately animate those elements. We also looked at existing cartoons for references. Afterwards we produced a storyboard which was key for our final cut. Through editing we deflected the essence of Keaton’s comedy burlesque. We animated a plan from roughs to compositing in order to understand the process through different production tests, and learned from our mistakes. We chose a high level of detail, different from the academic style where fixed background elements have a high level of detail and animated elements have a low level of detail. It took a very long time to animate each frame with this kind of detail. Moreover, we kept some mistakes in there to have our own fucked up aesthetic. Thus, we built our own process – far from classical production methods – in order to have our own style.

After storyboarding, I carried out rough animation and Yohan drew above those roughs and colorized them (something we called ‘tide step’). I then composited all passes: drawings, backgrounds, lights effects, shadows, blurs … We finished off moving into sound design with Florian Gentelet. Yohan has sound design skills too so they composed together with a mix of analogue instruments and electronic samples. Sound design is one of the most spiritual and experimental parts of filmmaking as it works with feelings. It lets you reveal certain pieces of animation and offscreen action.

IN was created with the digital support of the Adobe Suite: Illustrator, Flash for rough animation and After Effect for compositing, but by using traditional techniques such as cel animation. We wrote the narrative back in August 2014 and exported the final sequence in February 2015, so the film took more than 6 months to complete, but it was a parallel project, we weren’t full time on it. All in all it required more than 500 hours of work and about 2000 drawings. There was no budget, we were solely fuelled by passion.