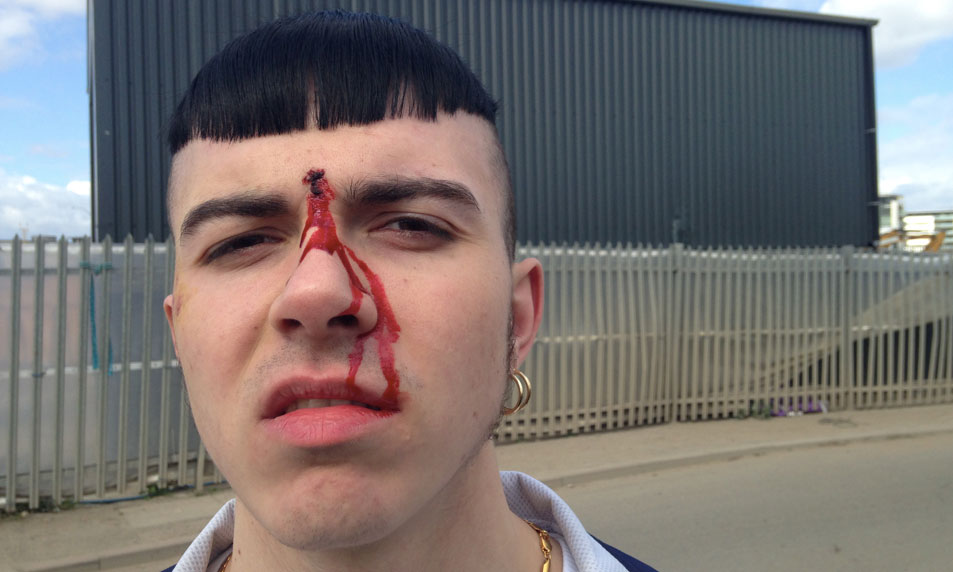 Ever since we featured his intricate Etta Bond video back in May 2013, we’ve been keeping a crafty eye on the career of director/editor Jeremy Cole. Fresh from directing Channel 4 music series Four to the Floor with fellow DN favourite Jamie Jessett, Cole has just released a high-profile music video for recent Mercury Prize winners Young Fathers

A simple premise featuring an impressive central performance that perfectly captures the raw energy of the Young Fathers ‘Shame’ track, we decided we couldn’t let such a standout music video slip through our grasp without speaking to the Director about his latest production:

Knowing your work (as we do here on DN), you seem to have a pretty good relationship with Young Fathers – how did this collaboration come about?

We’ve spoken a lot about doing videos, but they’ve always been hands on in making their own; this time round, I think they were just too busy touring and needed something imminently for the release of their new album. We met for a pint when they came back from South Africa and went through footage they had shot of the youth culture and the scenes out in SA. The idea was for me to edit the footage into a video – but after reviewing and a few pints, we decided the time’d be better spent just shooting a new video, even though the release date was a couple of weeks away.

The idea came directly from the aggressive euphoria of the track.

Where did the video concept for Shame come from? Was it something you had in mind for a while or was it inspired by the track?

The idea came directly from the aggressive euphoria of the track, although the character is very reflective of experiences and people I knew when I was younger. The concept and character were written the same night after meeting the band. They seemed to be in to it straight away, with the only concern being to make sure we had the right actor/dancer to play Terry.

The success of the video relies a lot on the performance of your lead actor, how did you go about casting Joshua Hubbard and what do you think he brings to the video (apart from that haircut!)?

Haha, casting Josh was a result of pure haste and luck. I tried casting sites, agencies and social shouts but came out dry. I happened to be meeting a mate who saw my panic and introduced me to Holly Blakey, who’s choreographed some of my favourite promos. We met, and luckily she was into the script. We didn’t have time for casting so she showed me some photos of Josh and I thought he could work if he shaved his head, which was dyed fire engine red. He wouldn’t shave his hair as he needed it on other jobs, but agreed to dye it black. He’s based in Manchester so I only met him the afternoon before the shoot while he rehearsed with Holly. The character you see in the video is very different to Josh’s real life persona – he did seriously well, all things considered, and Holly’s choreography brought out an interesting side of the character. 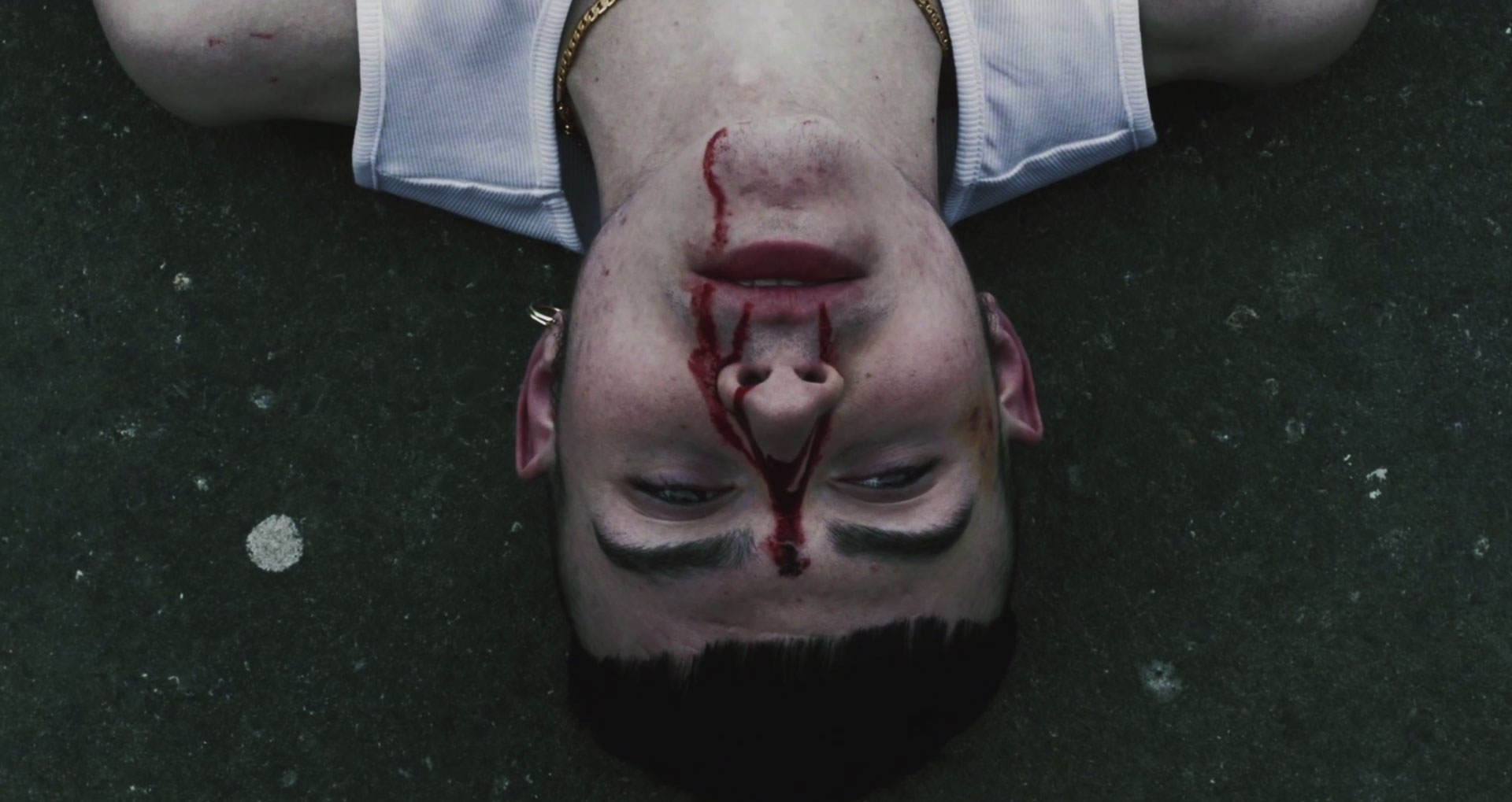 In the video we see Terry determinedly walking (or “bowling” as we’d call it in the UK) across an urban landscape with a knife in hand and blood pouring from his head. What was the significance of the knife and the blood?

I wanted Terry to be a character that made people feel uncomfortable from his appearance (i.e. you wouldn’t sit next to him on the bus?). The original concept was a lot more blatant with him removing every segment of his identity and turning into a bloody and emotional mess by the end; but we stripped it back to being more subtle so the viewer could interpret as they wished. For me, Terry’s actions are symbolic of stripping your identity and the results being both liberating and traumatic.

I think Josh was genuinely pissed off and irritated about waiting in the cold with a director making him rehearse over and over.

How much work did you put into getting that walk just right?

Our shoot was delayed by a few of hours after Greater London Authority’s security came down and hassled us about permits (we were filming right next to City Airport). Josh and I got to spend some of that time walking through and getting into character. When the security got bored of stopping us, I think Josh was genuinely pissed off and irritated about waiting in the cold with a director making him rehearse over and over. A lot of people have commented on how good his walk is, so I’m glad it came across! 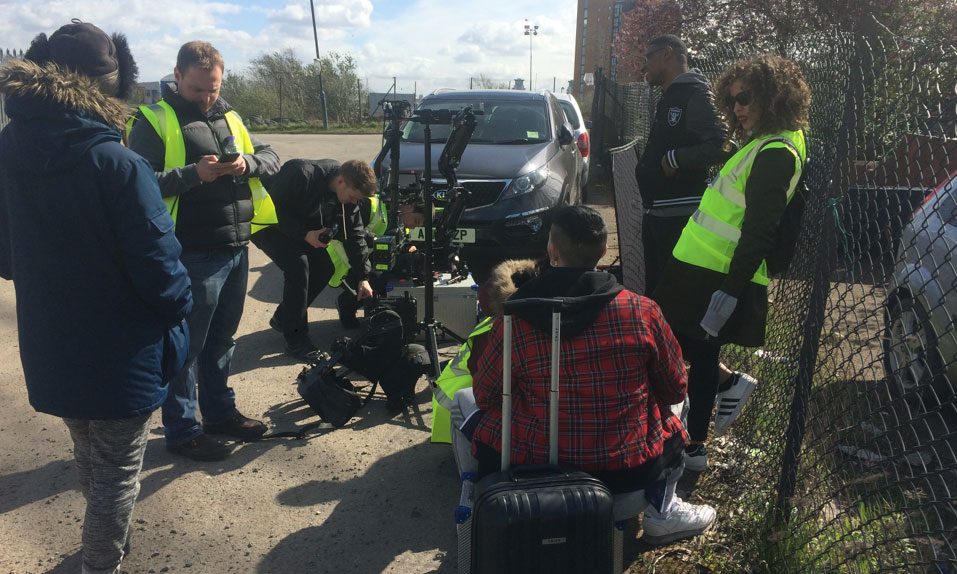 You mentioned in our brief opening chat about the video that from concept to delivery you turned this around in just two weeks – what did such a tight deadline mean for the production?

I guess the intensity of the production just forced everyone into trusting their first instinct. Working on a tight turnaround can be beneficial when it’s a project you’re into as there’s no time for procrastinating, but it means you have no contingency for error. The original location (Thamesmead Estate), for example, fell through the day before the shoot and my scouting efforts were reduced to dropping the ‘Google-Earth-Man’ in random corners of London to find a new location. Having a strong cast and crew (including David Wright, DOP; Julian Fletcher, Editor and JP Davidson, Colourist) available and willing was extremely lucky too – it could’ve been an incredibly different video without them.

Got a few promos in the works which is always fun. Hoping that we can get some more long form shows to TV. Would be great to do another run of Four To The Floor soon, but that’s out of my hands.