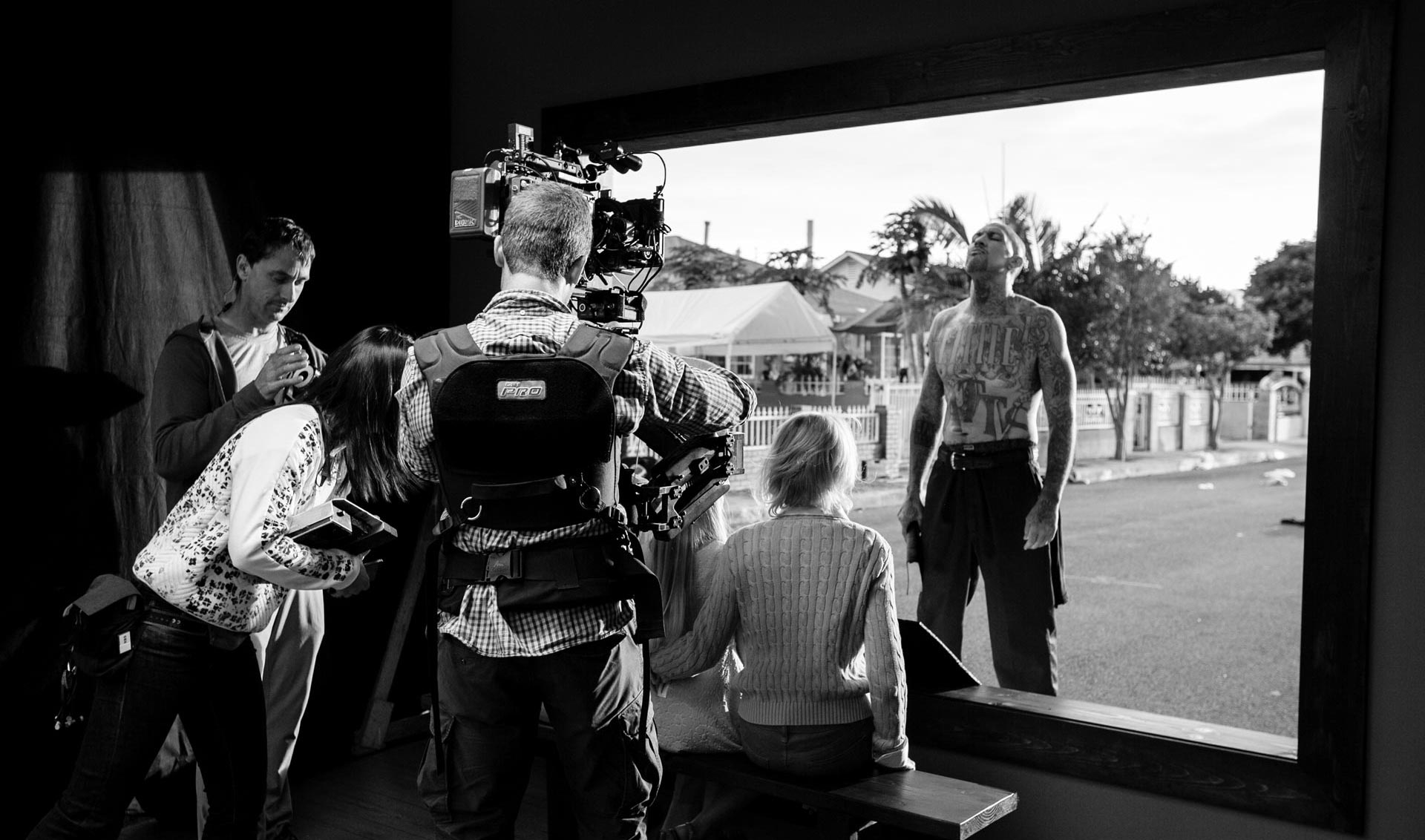 When you think of music videos, more often than not people will assume they’ll be lacking in narrative and depth, but with this latest piece it seems as if you’ve considered narrative, universe and backstory – there’s really a lot going on. Where did the idea come from and how would you sum up the premise of the video?

I always push narrative and character as far as I possibly can when I make a music video, or a short film. It’s all cinema to me. Even though music videos are a short medium, there’s still so much you can pack in, I love the density they can have, which is perhaps something that can only work in music videos. If you made a short film that’s very packed and short, it can be too much, but because it’s all riding the music, everything has flow, it all dances together. Each moment, each character, each cut, each shot, is all designed around the music. It’s a big dance.

I first wrote a completely different idea which wasn’t right, so I then went and read up more on Vince, particularly his interview with Pitchfork. There was an idea in my head of presenting LA as a massive open prison, revealed at the end by seeing a huge perimeter wall out at sea. I even had a speedboat scene where you’d have these guys going out in the water and hitting this wall, obviously that was totally out of budget. So in this interview he says –

“The way I look at music—especially urban music, black-people music, whatever you want to call it—is that we’re all in the zoo, and the listeners are the people outside of the cage. You can look at five lions that could literally destroy you, but since you’re looking through the glass, it’s fun and cute. You point at the glass. You wave at them. But you’re not going to step inside that glass, because you know what’ll happen to you. Rappers are making this shit a petting zoo. They’re like, “It’s cool, you can walk up, we’re not threatening, we’re just musicians, it’s all an act.” But it’s actually a very real thing. It’s not a game. One of my friends just died last month—got shot in his face five times in the back of his mom’s house in front of his 5-year-old sister. He was 24 and a good dude, went to work, never really hurt nobody. So if this is what we’re rapping about, why do you not feel that?” 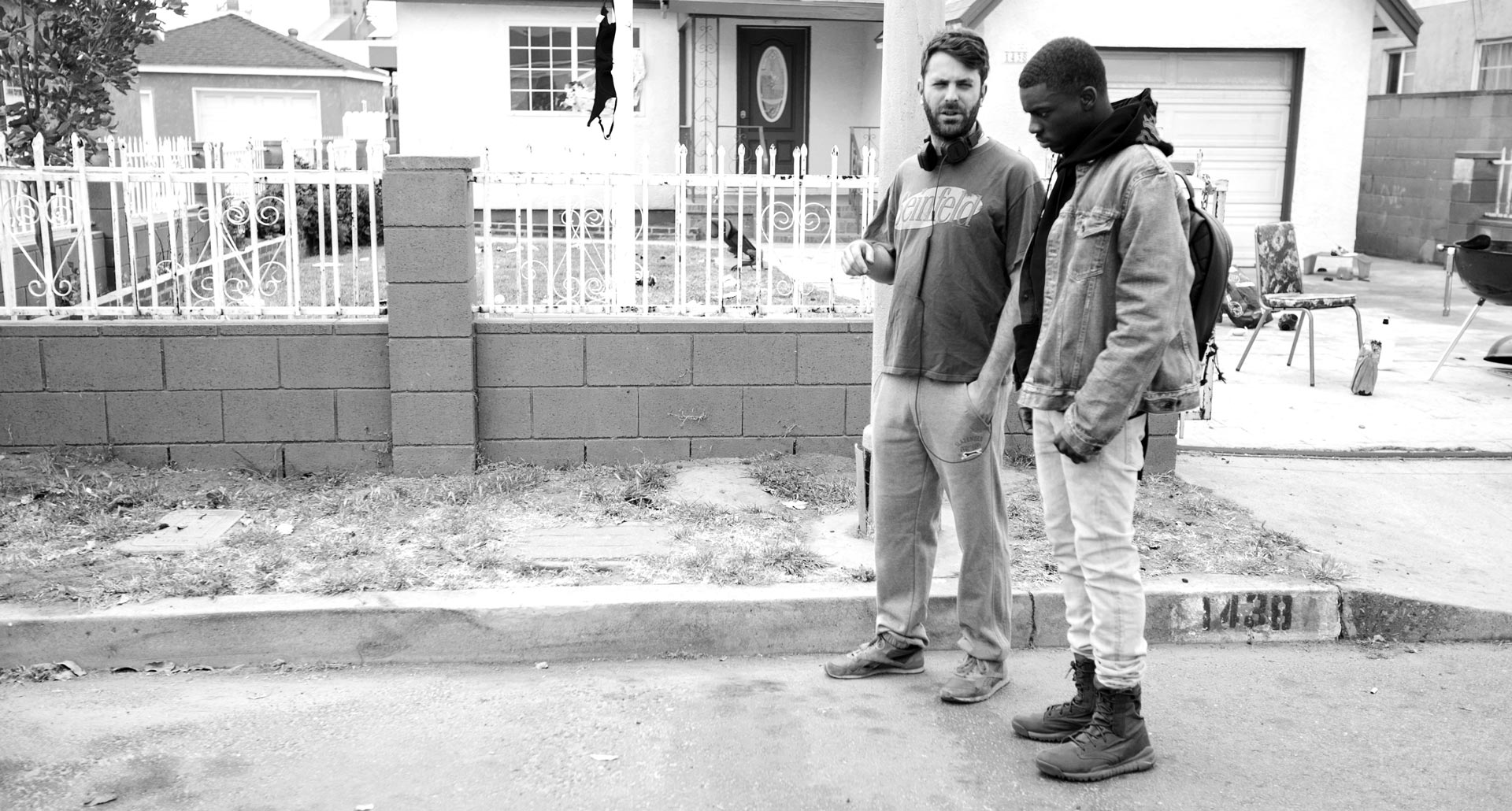 After I read this, it all clicked together. I wanted to visually represent Vince’s outlook on this music industry, and this idea of a zoo. Dobrina Manolova, who co-wrote the Paolo Nutini video with me, is the first I send all my ideas to and she pointed out that human zoos existed and sent me some articles, which then added a whole other layer to the idea. Google “Human Zoos”, it’s crazy. So that was the premise, based on Vince’s outlook on the industry, the zoo metaphor, but then there was the task of creating the world which is being viewed. The characters are total caricatures, they’re certainly not representative in a literal sense to Vince’s world and where he lives, but instead they’re symbols for the most part. There’s also an element of them being a product of the outside gaze, representations of the stereotypes held in the minds of those who have no experience of this world Vince talks of.

It’s meant as a dream, a ride, a trip of sorts.

The idea of Vince’s journey is then also based on how he talks about his music. He doesn’t spend all day in the studio, he wants to live life, and then record when he has something to say, otherwise there’s no basis to the music. So in the video he leaves his house, and passes these characters and events, on route to the “music video shoot”. He doesn’t look at the camera once on the walk, but then once on stage, that’s him performing, telling us what he’s seen, he looks into the camera, it’s as if this is the music video, inside of the music video. The guy with the helmet was meant to be a label guy, the money man, the person who pays Vince. But everyone thinks he’s a cop, that’s my fault for not leaving his suit jacket on, but it still works well with the whole police brutality angle. But the idea was this label man who has had to go into the “cage”, and is basically shitting himself, having brought a helmet and bullet proof vest. You then have the preacher, this was the first image that came to mind when I listened, without much thinking, it was the most subconscious part of the video. I got this visual in my mind of a tattooed Mexican man holding a book in the air as he vacantly mimes the lyrics, as if taken over by his perceived god, whatever that might be. It’s meant to be more like a cult, and the people following are the destitute people who have nothing left but to follow this person to their eventual end. My friend Damian Le Bas sent me a great Marx quote which summarises it rather well… “Religion is the sigh of the oppressed creature, the heart of a heartless world, and the soul of soulless conditions. It is the opium of the people.” But they’re also representative of the protesters in the recent events which have been going on, and end up victim to the militarization of the police in the USA, shown with big gun towers. As much as the protests are so important, there’s also a sense of pointlessness to them, and in the video it’s as if they’ve been protesting for years on end, to no effect, and just end up dismayed, wandering forward. Snoh Aalegra’s scene at the end, when she sings, then allowed me to go into a dreamlike journey under the skin of the world shown and use the glass effect as a metaphor for the whole concept of the human zoo. But it’s meant as a dream, a ride, a trip of sorts. I like how Snoh’s beauty is quite impactful, amongst this chaos and dead bodies strewn around. It’s as if she’s a ghost who takes us by the hand before the final reveal. Gosh that was a really long description sorry, but as you say there’s a lot of stuff packed in. 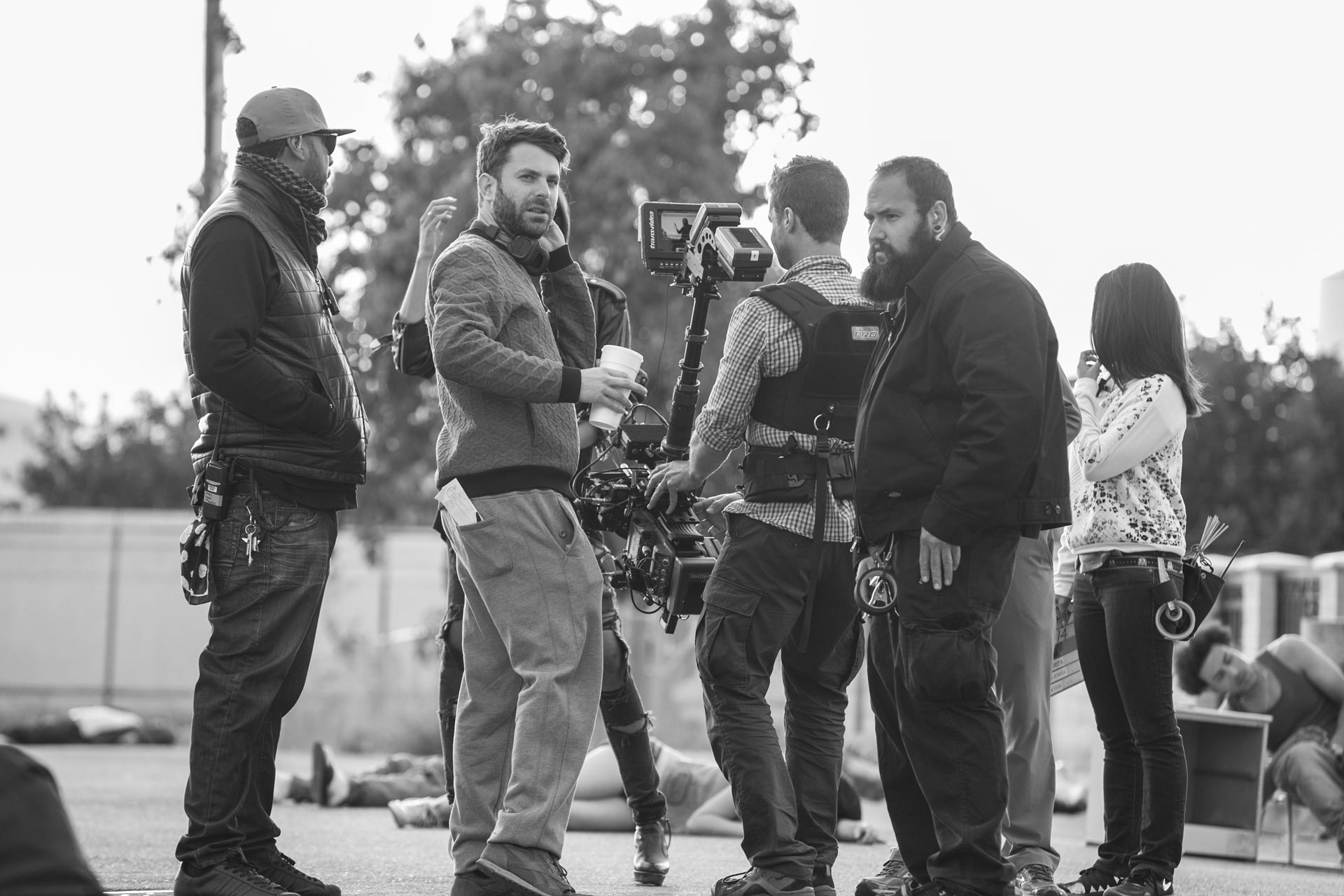 Alongside its fascinating concept, there’s some impressive production values on show here, including some eye-catching cinematography. What were your aims for the look and feel of the piece?

Well, major hats off to Martim Vian our DP. He was absolutely incredible. He created a custom LUT in the Arri camera, and I was in love with the images he was getting from the get go. We were very much focused on capturing the look of the sky, because we were blessed with the cloudiest day I’ve seen in LA I think. That with the smoke coming from the factory behind made for a really perfect aesthetic background for the narrative. Damian Church was also golden, he had the steadicam rig on pretty much all day and completely nailed it. So they played a huge part, along with Paris Pickard our production designer. She also did the design for Odesza – Say My Name which I shot last year. She was just next level amazing. The aim was to have a beautiful image, but, to still feel the chaos, rawness and apocalypse of the world we were presenting. The look and feel is something I find comes after though, it’s just a natural reaction I have to the music, the way the camera moves, the way the cuts happen. So the intention for me is simply to try, as much as I can, deliver the video I see in my mind into reality. Sometimes it’s not the same, sometimes it’s almost exactly as I see it, but with this video it’s a cut above how I imagined it and that’s a testament to the incredible crew we had. Also a huge shout out to our amazing stylist Kristina Torgerson, and the incredible VFX team at Gloria VFX. 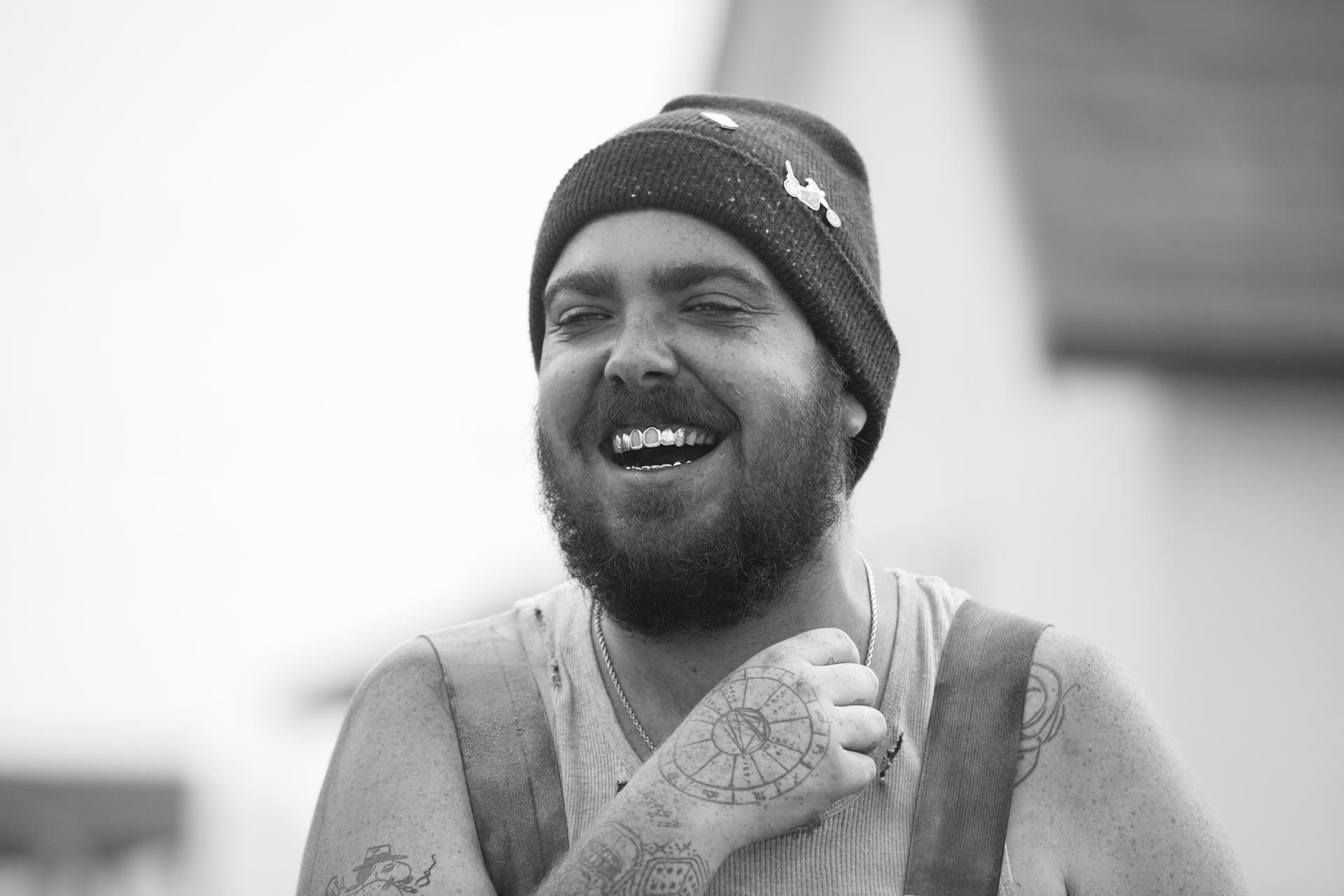 Why did you choose to shoot in black and white and what do you think it adds (or takes away) to the video?

It was just always going to be a black and white video, it’s how I saw the images when I listened to the track. It’s the first time shooting black and white for me, and this is simply because I haven’t previously received a track, and gotten black and white imagery flowing through my mind. Even with the first idea which was totally different, I also imagined it black and white. What I loved about it is how it simplifies the world you present, it removes certain details and elevates others. It creates this symbolic feel to everything.

What do you hope your audience takes away from the film? Is it just entertainment or is there a deeper message?

It’s social commentary that piggy backs entertainment. I wanted it to be an experience, something that would linger. There’s underlying politics and social commentary to a lot of my work, but quite hidden most of the time, this was a chance to be much bolder due to Vince being such a bold voice. The world is a fucked up place, this video isn’t going to change that, but it’s definitely meant as a reflection and summary of a certain aspect of it. It’s also of course there to show Vince Staples, who he is, visualise his music. He’s an absolutely incredible artist, the video is strong due to that. 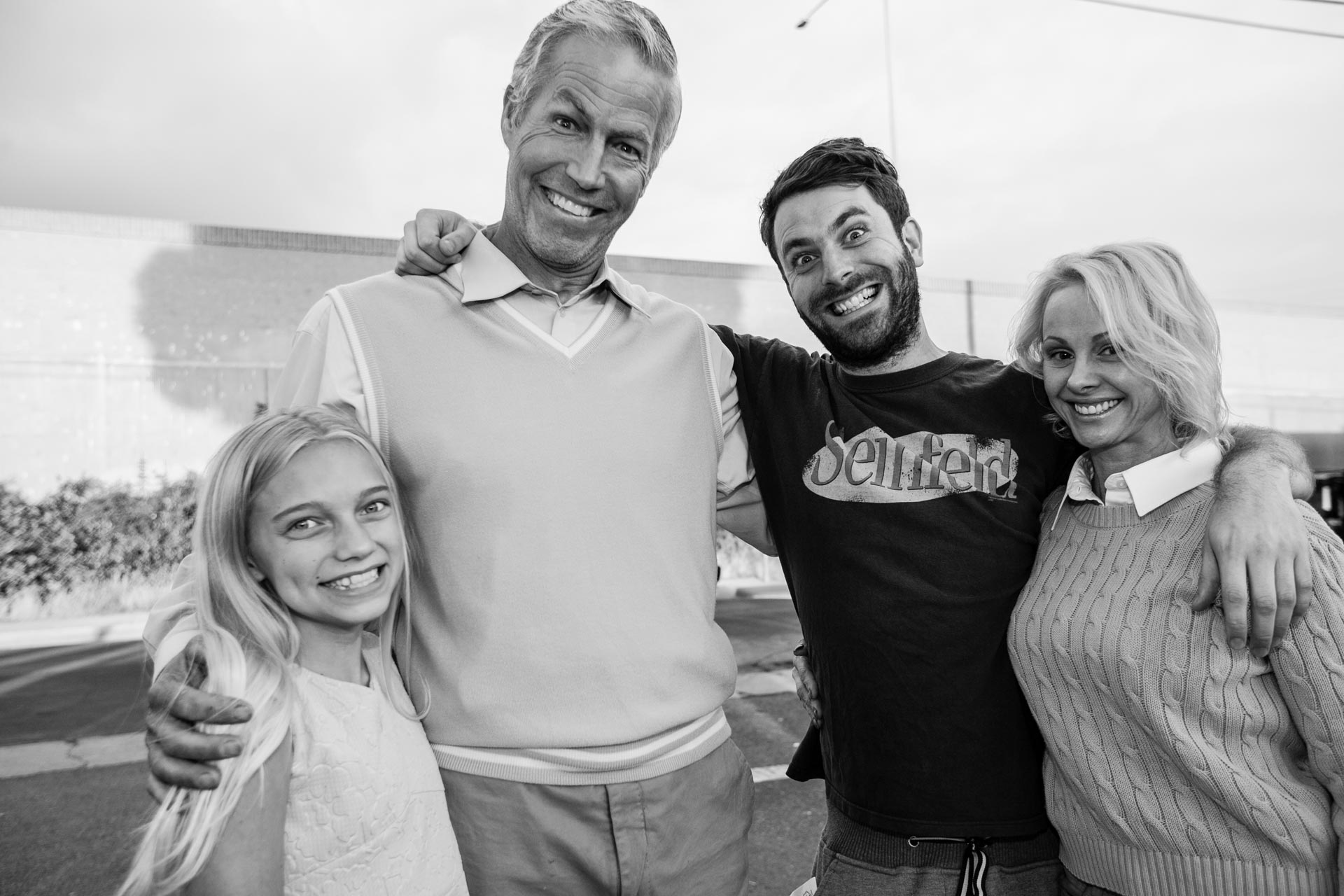 I don’t want to jinx it! I’m writing on a track for an artist I really love, I’m very excited. All I’ll say is that it is probably going to be shot black and white too. I’m then going to be moving to Mexico City come September or October, to start working with a wonderful production company I just signed to there called The Lift. I fell in love with the city, it’s incredible, and it’s only 3.5 hours from LA for when I have shoots there.