Behind the Lens of ‘Mr Director’ – an Andy Martin short film 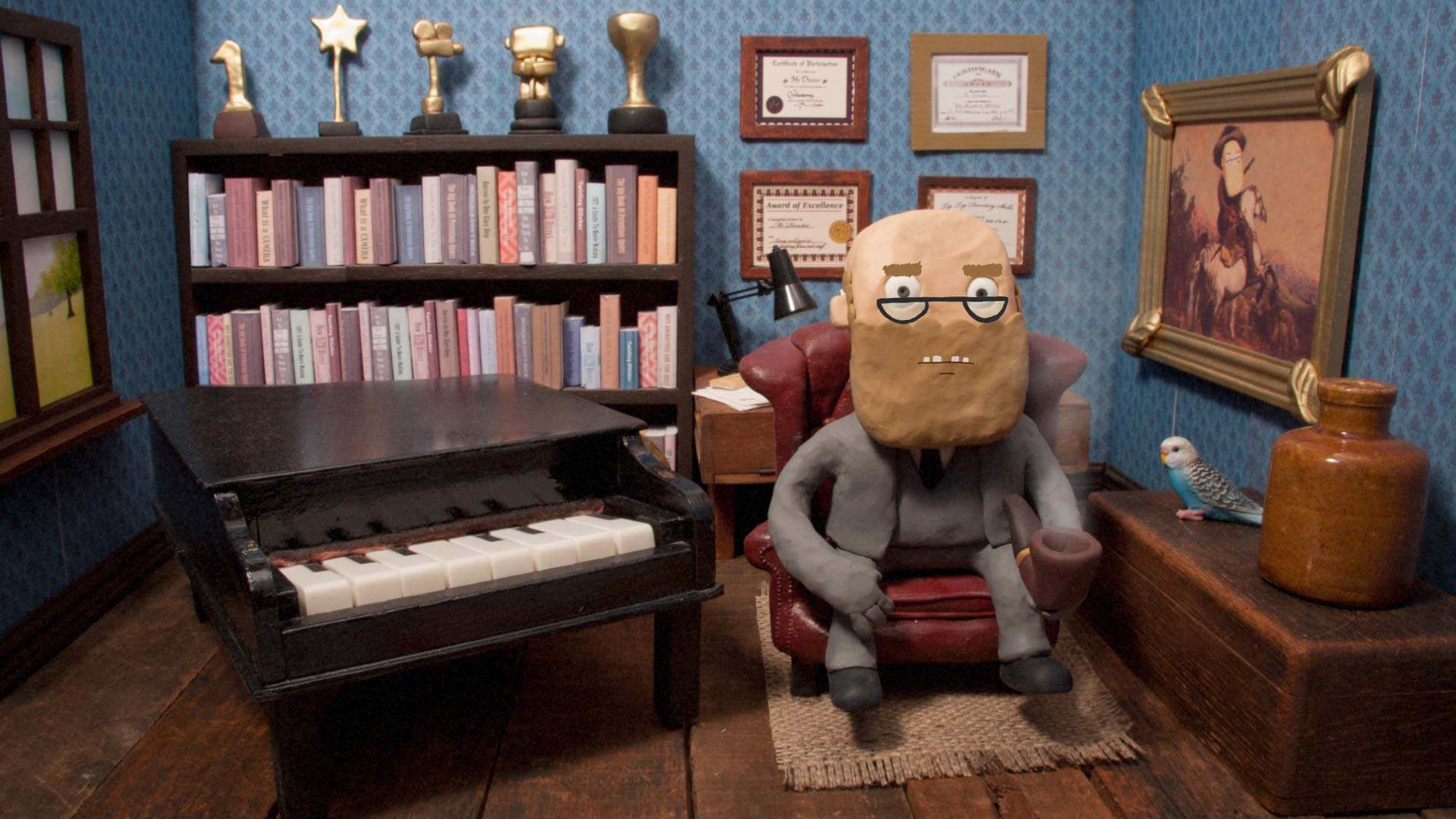 In the last few years Andy Martin has become an easily recognisable presence for Vimeo dwellers like myself. The past 24-months or so have seen him release a 12-part short film about alien worlds called The Planets, a series of music videos for his band Creature Box, a 60-second short about self-obsession and a video for the Pictoplasma Portrait Exhibition in Berlin. Clocking up over 1-million views and a fistful of Vimeo Staff Picks along the way, his prolific online output has made him a name to firmly (and regularly) keep an eye on for those who love their animation served-up through the wonders of the internet. Despite barely seeming to have time to sleep or eat in-between animating, Andy granted DN some time to talk about his latest film Mr Director and give us an insightful glimpse into his production process.

Mr Director was a film 6 years in the making, how did the idea originate and why did it take so long to complete?

It started when I built a forest set that ended up being the set for Mr Director’s first film Lost In The Woodland. Originally I was trying to write a short about four guys around a campfire but the scripts were terrible. From this I got the idea of a filmmaker who thought everything he made was the greatest when in fact it was pretty shoddy. I made the campfire kids a film within this film and started planning the rest of the filmmaker’s career.

It was unfunded so I made it in-between paid jobs.

Also, I watch a lot of arts documentaries and one particular episode of Imagine (a BBC One arts series) had various pianists talking about their careers in very highfalutin language. This seemed ripe for satirising so I decided to set the film as an arts documentary about a pretentious film director with a massive ego.

It took so long to complete because I do almost everything myself. It was unfunded so I made it in-between paid jobs which, through necessity of paying the mortgage, have to take priority! Also, a project called The Planets took over my life during 2013 so that set me back a year.

It feels like a film for film-lovers – were there any existing films/filmmakers that inspired segments/characters in your short?

Definitely. There are nods to loads of stuff. I hope part of the fun is trying to spot them.

One of my favourite bits is the The Great Experimental Adventure which is my homage to this scene in The Meaning of Life.

There’s a great sense of fun about this film (as there is in most of your work) – was it a film as fun to make as it is to watch?

This is the first film where I had proper actors doing the voices and that process was a load of fun. I worked with Nick Blood (who’s now staring in Marvel’s Agents Of Shield!) on a lot of the characters within the films and he brought a great comic sensibility and a variety to the voices. Also, Ben Deery who plays Mr Director surpassed all my expectations of how I wanted the character to sound. As soon as he started reading the script as the character, Mr Director was brought alive for me and I started to get ideas on how he could move and perform visually.

Once I got into the nitty gritty of the animation it was a case of getting my head down every opportunity I had. It was a learning process with the stop motion as it was the most ambitious film I’ve done in this medium. But I enjoy model making and in the end if the results of the animation still make me laugh then I know I’m on the right track.

One of the things we always enjoy about your work here at Directors Notes, is waiting to see what animation technique your latest film will employ. Mr Director is a short the utilises stop-motion to tell its story, why did you choose this approach for this narrative and what do you think it adds that other animation techniques wouldn’t have?

Mr Director is an old school filmmaker, he’s the kind of guy who appreciates a more traditional technique. I think telling a story about someone like him in a slick 3D style or a minimalist 2D vector approach wouldn’t have fit well with the character.

I love hand-crafted animation, where you can see the fingerprints and the tactile nature of the characters, props and sets come across on screen. It was good to use that over a whole film this time.

I enjoy it when you watch something more than once and it gets better as you spot more things that enrich the film.

It feels as if you went to great deal of trouble in creating the universe in which Mr Director exists – from books on shelves to posters on walls. What do you think this level of attention to detail adds to the film?

There are a lot of references and jokes in the details that hopefully will allow people to enjoy the film on repeat viewing. I enjoy it when you watch something more than once and it gets better as you spot more things that enrich the film.

Also, I think it’s important to give the feeling that the character has a life outside of the film you are making. Mr Director has already lived a long life and his study gives you a glimpse into who he is. His films are features and I think they needed the richness and the detail to give this impression.

What do you think the future holds for Mr Director – will we see more of his work appear online – he seems pretty active on Social Media.

Yeah, he’s got a twitter account that he has a healthy distain for! You can follow him at @mrdirectorfilms for mediocre ideas for future films and tips on filmmaking from his unique perspective.

I’ve uploaded the posters from his films to the Mr Director website as well as behind the scenes stuff and other bits and pieces, but apart from that I think it’s time to move on to new things. I had thought of doing a few fake arts documentaries with the same presenter introducing them featuring a 60s’ rock act, an abstract painter and a novelist but I think this is one of the many ideas I’ll file under ‘Thing’s I’ll Never Get Round To Doing’.

I’m trying to develop a couple of ideas for animated TV series at the moment. I’d love to move into more long form formats where I can take a gang of characters and set them off on various adventures.