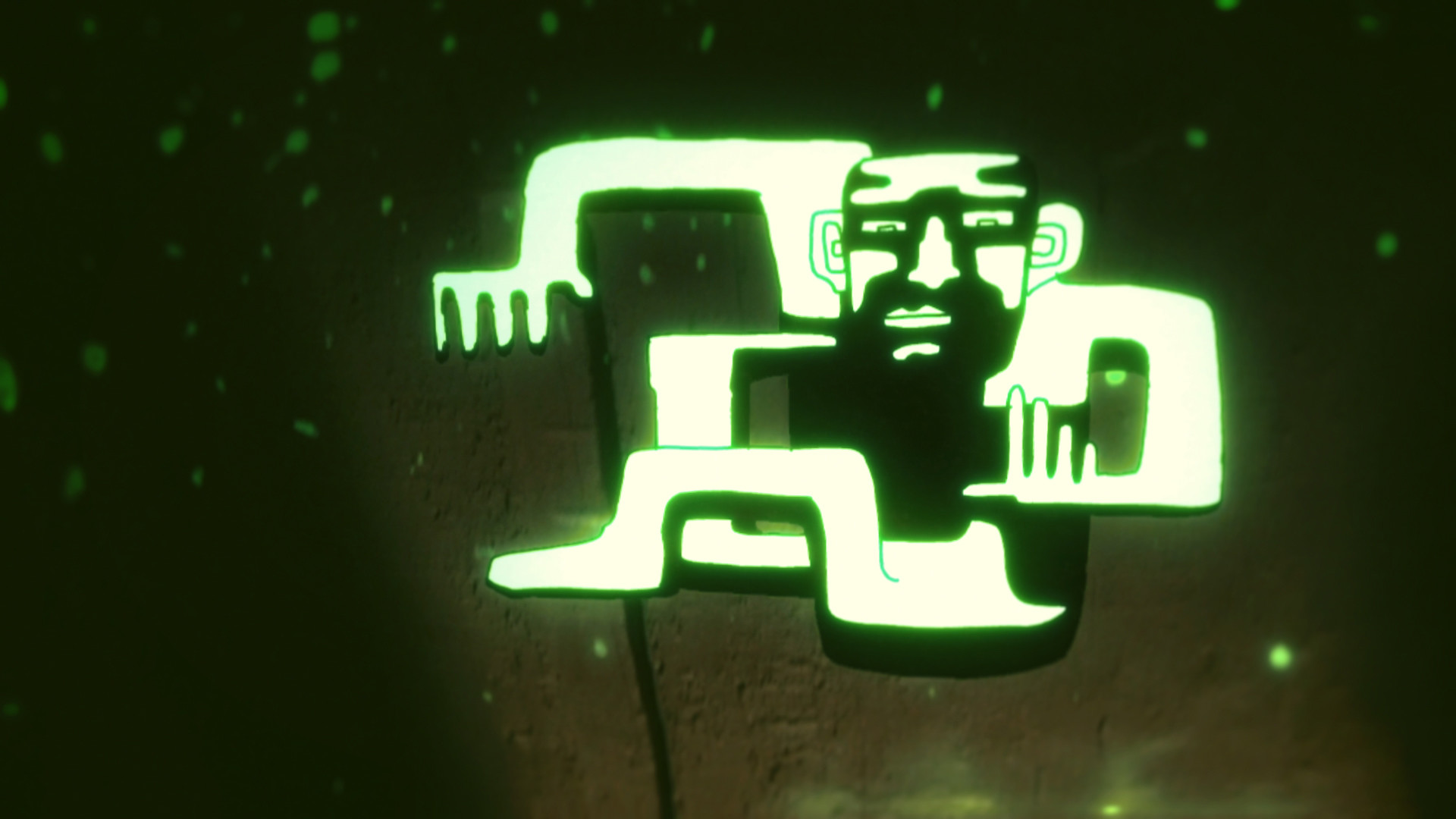 One of the criticisms often thrown at RCA grad films is that the abstract nature of their storytelling can leave some feeling a little cold. Proving that animation can be experimental, enlightening and entertaining, Jesse Collett’s short Boom is Life is refreshing mix of inventive techniques and poetic storytelling. Feeling like a film that encourages conversation, I spoke to director Collett about what inspired his unusual narrative and how he created the short’s distinct look.

Boom is Life has a very contemplative feel to it – where did the concept come from?

I had come across a short documentary about the first astronauts that saw the earth from space, about the psychological effect of leaving the world you live on and looking back at it as one single object. I had also been thinking about lots of epic stuff as people do every now and then. Thoughts about the universe and multi-dimensional infinite space etc. Things you can almost get your head around for a bit but eventually you drift back to ‘reality’. Lots of pretty far out stuff that didn’t seem to have any connection at all with my life and the world around me. So, what the concept became partly about was two ways of looking at the world: looking at it from space as a sphere floating against an infinite backdrop of mind-bending cosmic stuff that I have absolutely no understanding of, and looking at it from the surface where we can get on with our lives and eat, drink and sleep, etc.

Most of the aesthetic decisions revolved around bringing the various elements and techniques together in a seamless and believable way.

There’s a certain “grittiness” to the aesthetic – how did you decide on the visual style?

Most of the aesthetic decisions revolved around bringing the various elements and techniques together in a seamless and believable way. The limited colour palette, the glow, the shaky camera, the character design, the hard lighting, etc. all worked in different ways to try and gel it all together.

What can you tell us about production? How long did it take, how many people worked on the film, what tools did you use?

From conception to birth the film took about nine months to make. It was quite a fluid process. I moved around between drawing, storyboarding, writing, sound design, music and editing so there wasn’t really a specific period of production. I had an assistant for two weeks who helped with the 2D animation.

There are two main elements to the film’s visuals: The environment and the characters. The environment is a real miniature set made from normal pottery clay in the foreground and cardboard in the background. It was partly lit using conventional lighting but I mainly used projectors and UV lights which allowed me to do all sorts of things that would have been impossible otherwise. I was even able to project the character’s moving shadow onto the set so it was physically there and didn’t need to be composited in afterwards. The environment was captured using a handheld video camera which allowed me to film these animated shadows, and also capture parts of the set moving in real life (like a door opening). All camera moves were done by hand. The characters were animated in Adobe Flash and then integrated into the footage of the environment using the 3D camera tracker in After Effects. That’s a simplified version of how it was made, every shot was done in quite different ways and in different orders, some parts of the environment weren’t actually real and looked very different in real life, basically a big mash up of real and virtual elements. There was also a bit of stop motion and Cinema 4D in there too.

I wanted the viewer to feel like they’d seen the universe from a different point of view.

Boom is Life doesn’t follow what many would call a “traditional” narrative – what do you hope your viewers take away from the film?

The film was about a feeling really. It’s hard to talk about it without sounding like Brian Cox on DMT. I wanted the viewer to feel like they’d seen the universe from a different point of view, to slowly shatter their sense of reality and leave them in a state of existential awareness. It was important for me to try and take the viewer on an immersive journey, to be grounded in conventional reality one minute and then drift in some unknown direction into another reality where there is no up and down or linear sense of time or scale. Then realize we haven’t even gone anywhere anyway and everything’s basically just the same thing. It’s intangible, spiritual and complicated. See?

This was your graduation film – how has life post-RCA been and what have you been working on since?

Post-RCA life consisted mainly of several music videos, some live visuals for the music industry and various other freelance animation jobs. I’ve just returned home after a long journey so I’ve been out of the picture for the last half-year. However I am just starting a new project, collaborating with a contemporary dance company for a new production, transforming the set using animation.