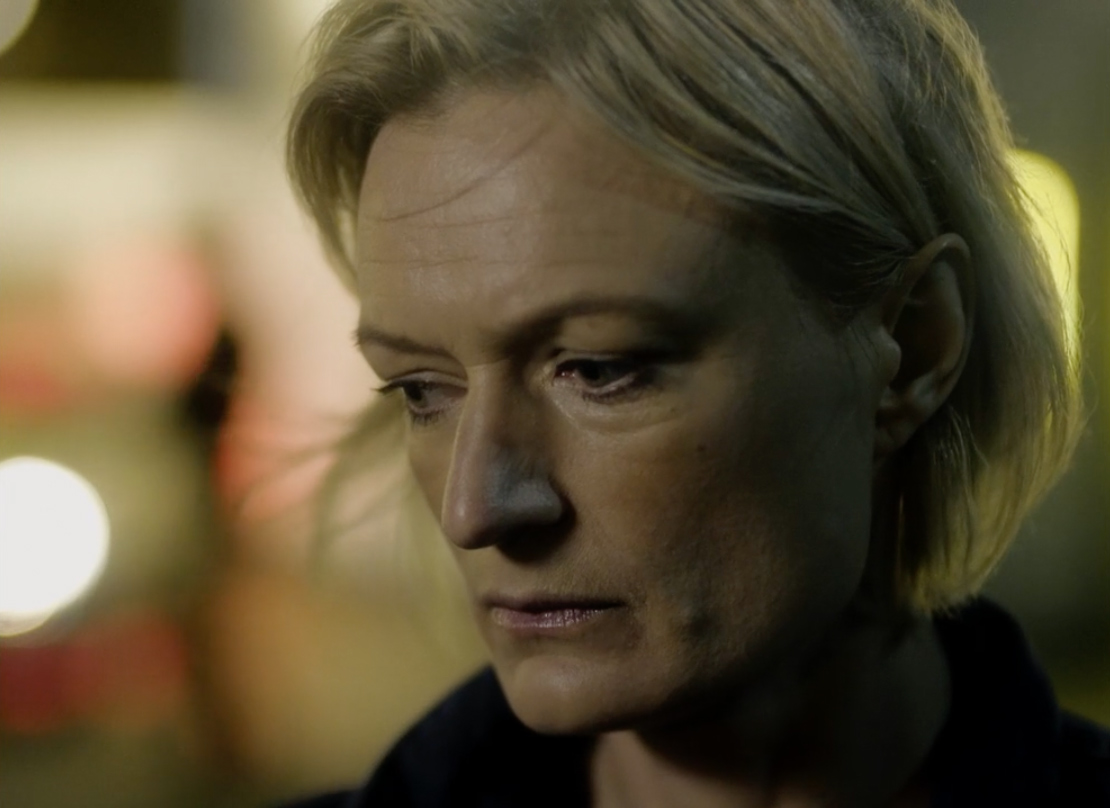 Whether putting his skills to use in narrative shorts, fashion films or music videos, Director/DoP Corentin Kopp consistently pushes the limits of his craft through experimentation with both framing and narrative conventions. That same filmic sensibility was applied to Härligt Sverige, the first release from cross-border musical duo Victoria+Jean’s ambitious video album project. Kopp talks to DN about drawing inspiration from film noir and graphic novels to deliver his dark tale of lust and betrayal.

How did Victoria’s yearning for Sweden in the Härligt Sverige’s lyrics influence the concept and pitch of the video?

When I got contacted by V+J, I think I already had a base idea for a ‘film noir’ music video based on a ‘love triangle’ and thought it could maybe fit their music. Then came the first meeting where they presented the song Härligt Sverige as being some kind of ode to Sweden and its nature. I then thought: “OK I’ll find another video idea and keep the ‘film noir’ concept for later”. Except that the more I listened to the song, the more its contained energy and underlying sadness pushed me back to my original idea even if it meant playing in counterpoint to the song.

When it came to the lyrics, I actually never got a word for word translation! At the end of the first meeting it was decided that Victoria would send me the translation which she actually never did so I started working without them – developing an ‘exploded’ storyline that also somehow incorporated Victoria+Jean and some specifically Swedish touches. Later on, it became clear that it was a choice for them not to provide me with the translation. Looking back, I think it was definitely an interesting choice and it will probably influence my future way of working because in some instances of my earlier work I think I’ve been way too literal with the lyrics.

There was a back an forth where I would talk about the project, show them some visuals references (the biggest one being the work of Bill Henson) and they would keep on telling me that I had “Carte Blanche”!! On that I really have to give Victoria+Jean a lot of credit, they launched themselves on the quite crazy bet of making a music video for each track of their upcoming album (I think some songs even have two videos!?) and I think that for each one of them they basically gave ‘free reign’ to the different directors!! It is quite a brave decision in these days where you always hear that you have to control your image but it’s also richer because paradoxically they end up presenting a more honest, generous image of themselves.

Härligt Sverige feels like a tease of a much richer story – is there a larger world that you used to inform yourself and your collaborators when making the film?

Not really, no, sorry! When writing the video I really focused on telling a story and creating a mood using as few elements as I could. Really considering what narrative and emotional information each shot was delivering and trying to scrap everything that was too evident, easy or visual! It’s not a 100% perfect on the narrative part but I’m really happy about how the mood part of the video ended up. I’ll be very glad if the video leads viewers to feel that it is part of a bigger universe but that is more the result of trying to build a visually coherent world than of actually developing the narrative outside the minimum needed for the piece. For example, I have no clue as to where the young man and the woman actually met for the first time?

We’ve seen you experiment with frame dimensions previously in films such as Fishing for Souls and MATCH, what led you to work with 4:3 this time? How important is the exploration of form as well as narrative to you as a filmmaker?

Blame the graphic novel!! I’ve been a big fan of them since I was a kid, all the Belgian classics and then later the more adult, longer format books like Watchmen, Berlin City of Stones, etc… One author especially always impressed me with his work on ‘frame’, I don’t know if he is well known outside the French speaking world but his name is Andreas and I would advise you to check him out if you’re interested in these kind of things.

More generally that play on format is something that you see used more and more, sometimes it’s purely gratuitous and counter productive but other times it is just brilliant – I’m especially thinking about Xavier Dolan’s Mommy. I hope it’s something that is here to stay. Also, I hope I’m in the second category! On Härligt Sverige I choose the format as an references to older film noir movies. It also helped me to really ‘trap’ my character in the frame and bring a kind of medium format aesthetic into the numerous portrait shots. And if I want to be picky about the format it is actually an Academic Format (1.375:1 vs 1.33 for the 4:3) – But that is pure DoP Vanity 😉

Whereas you explored POV in Montreal, here it feels as though you’re presenting a window into the characters’ souls through your use of tight close ups and lingering one shots. In what way did that shooting style feed into the noir themes of the story and prompt your use of the Sony A7S as your shoot camera?

Good question, I’m not sure actually. I’m a very visual person, so when I work on a project like a music video 90% of the ideas basically come to me directly as ‘frames’. The idea of using extreme close-up and lengthy shots, grow on me at the exact same time as the film-noir theme. It just felt the right way to film this project. In choosing the (hopefully) right gear for a project there is always a pragmatic/logistic part and a more artistic part. On the pragmatic side there was: a limited budget, the need to travel from Brussels to Sweden with most of the gear, the necessity to mount the camera at different angles on a car and the desire to have long fluid camera moves.

For that the small size and limited prize of the A7S/Atomos Shogun combo fitted the bill quite nicely. It saved us some time and money on the car rig, even if the external recorder was quite cumbersome. Also it allowed us to use the DJI Ronin for some long moving shots … not that I’m a gimbal fanboy, but weirdly enough a steadicam or a golf cart were not really within the budget! On the artistic side, it was also the good choice because of the quite insane ISO ability of the A7S. It obviously doesn’t release you from lighting but it allowed me to focus a lot of lighting intention into the background. For example, I think that for every light that I had out of the frame, I probably had 2 or 3 in the frame. It doesn’t fit every project but it is definitely one of my favorite way to light a scene.

Like I said earlier, I was also looking for some kind of medium format quality to the characters’ portrait shots – there the ability to switch the A7S between crop (S35mm) and full frame mode really helped. My lenses were some Leitz (Leica) Samcine and a SLR magic 50mm f0.95, so basically they were full frame ‘photo’ lenses modified for cinema use (BNC Mount) and therefore were covering both formats… Quite a luxury I have to say. In the end I basically ended up framing the shot, then played with the diaphragm till I had a fitting depth of field and liked the quality of the bokeh for that specific shot, and then adjusted the luminosity by playing with ND or the camera ISO. Whereas you can do that with any camera, the huge ISO range of the A7S made it really easy.

Finding actors with an ability to silently emote is crucial for a narrative music video such as this. Where did you gather your cast from and how did you ensure their performances would be clearly expressive but not overly dramatic?

First, I would like to thank my actors again for their engagement on this project which was not always the easiest one, I’m a 110% happy with their work! But to be honest the casting was quite limited by the fact that I was shooting abroad and therefore didn’t know anyone and reciprocally, nobody knew me. I posted ads on some websites, met 2 or 3 people for each role and went with my feelings – I didn’t did try out the actors or anything, there was sadly no time for that. But choosing to work with people who you feel you can easily communicate with is never a bad choice.

For Ture (who plays the boy) the start of the process was a bit different as my girlfriend actually met him at her work at Moderna Museet and basically asked him out of the blue if he would be interested. He said yes … I met him … and thought he was a perfect fit for the role even though he’d never acted before. When it comes to directing actors, I still have so much to learn that it’s hard for me to talk about it. But basically, I simply explained the story, showed them some images or film extracts relating to some of the sequences and we started from there. Overall it remained very prosaic, we didn’t go into deep psychology on this project, I think it would have been counter-productive!

Did the characters’ isolation within the frame provide a certain leeway when building narrative tension in post? How close is the final film to the script?

I would say that the final movie is easily 80% faithful to the script. Some stuff moved and we cut a few others, but the ‘exploded’ structure was very much present as such in the script. I don’t like to work with storyboards because they can be very deceptive, giving you fake impressions with perspective for example. But I do prepare my shots with ‘implantation’ drawing and a lot of other things, especially when I end up playing a lot of roles on the set like being Director and Director of Photography on this project.

What will we get to see from you next?

Good question…I’ve been collaborating as Director of Photography with Smith&Smith a directing duo on two projects lately. The first one a Clio Goldbrenner fashion film is already out, the second one is a music video which should be released in the next few weeks. We just entered postproduction for another fashion film which I co-directed and photographed and I also have a potential commercial project in Holland and in Paris. On the wish side, I think that Härligt Sverige really gave me a taste for more narrative projects, so I hope I will be able to develop that very soon, either as Director or Director of Photography.