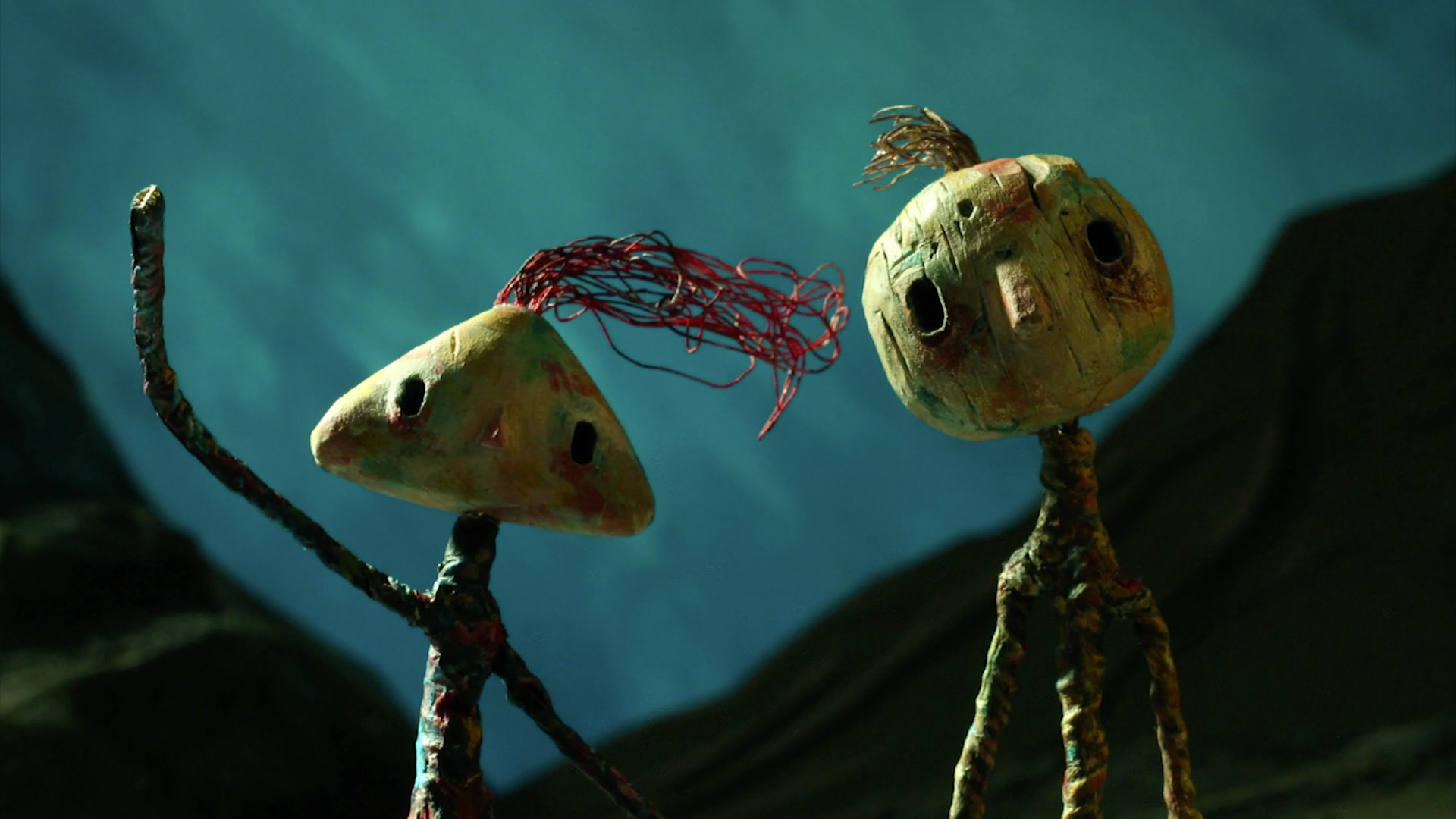 In Dear John, Péter Vácz’s new tale of psychedelic transformation through feline mischief  – and also the director’s second collaboration with musical stalwarts James – a couple find their mountain trip waylaid by the discovery of dark secrets deep in the woods. Péter shares how a bigger budget  and more forgiving timescale allowed him to gather a talented team of collaborators who helped him expand his ambitions for this colourful story of metamorphosis.

James gave you a choice of Girl at the End of the World tracks to choose from for the video, what drew you to Dear John?

It was great that they sent me three of their songs months ahead. I really liked Dear John because it is playful and has a good energy. It’s probably one of their most electronic sounding songs.

What in the song inspired this story of transformation? Did Tim Booth provide much in the way of a guide as to the themes he’s conveying in the song?

When I listened to it first a snappy and colorful vision came into my mind. Then I Skyped with Tim and he told me what all the poetic metaphors meant. Then he just threw images and ideas at me that came into his mind. Having such a sad meaning in the background of this song was a bit confusing. It’s talking about leaving a long lasting relationship, but there are mainly feelings expressed and hardly any actions.  So I took the essence of that feeling and started to search for a form.

The key to the story came when I found one of my drawings I had made in Berlin picturing myself with an arm turning into a tree branch.

When I handed in the first treatment I had a vague idea of a boy and a girl wondering in a mystic naturelike place where all the plants are pulsing and where they meet with a few weird characters… But the key to the story came when I found one of my drawings I had made in Berlin picturing myself with an arm turning into a tree branch. I told Tim my idea for the final story he really believed in it and encouraged me to do whatever I need to do. I then started to build the whole story around the boy’s transformation after being poisoned by a beautiful flower which became a metaphor of what the song was about. I also wanted a catalizator, a villain character who lures this couple into this mystic place where this transformation can take place… and this villain became the lovely cat.

Did All I’m Saying’s success affect what you could achieve this time round?

The success of All I’m Saying brought me the luxury of having months to prepare before the deadline, a bit more budget and as a result of those two, a great team with whom I could really aim for a more ambitious story and visual look.

To me, Dear John feels like it takes place in the same world as All I’m Saying. Was that a conscious connection? How did the style of the environments develop?

It wasn’t conscious. Maybe I just wanted to try to achieve the cinematic look that I couldn’t afford when I was making All I’m Saying. This time I worked with a team who turned my designs into beautifully crafted sets. With the help of Joseph Wallace I was able to work out a more complex story structure, he also animated and together we really pushed the quality of cinematography which made Milán Kopasz’s trees, rocks and mountains look even more amazing on the screen. Adding to that came Attila Bertóti’s fine touch to the 2D hallucination parts to make them fit better in the stop motion world. 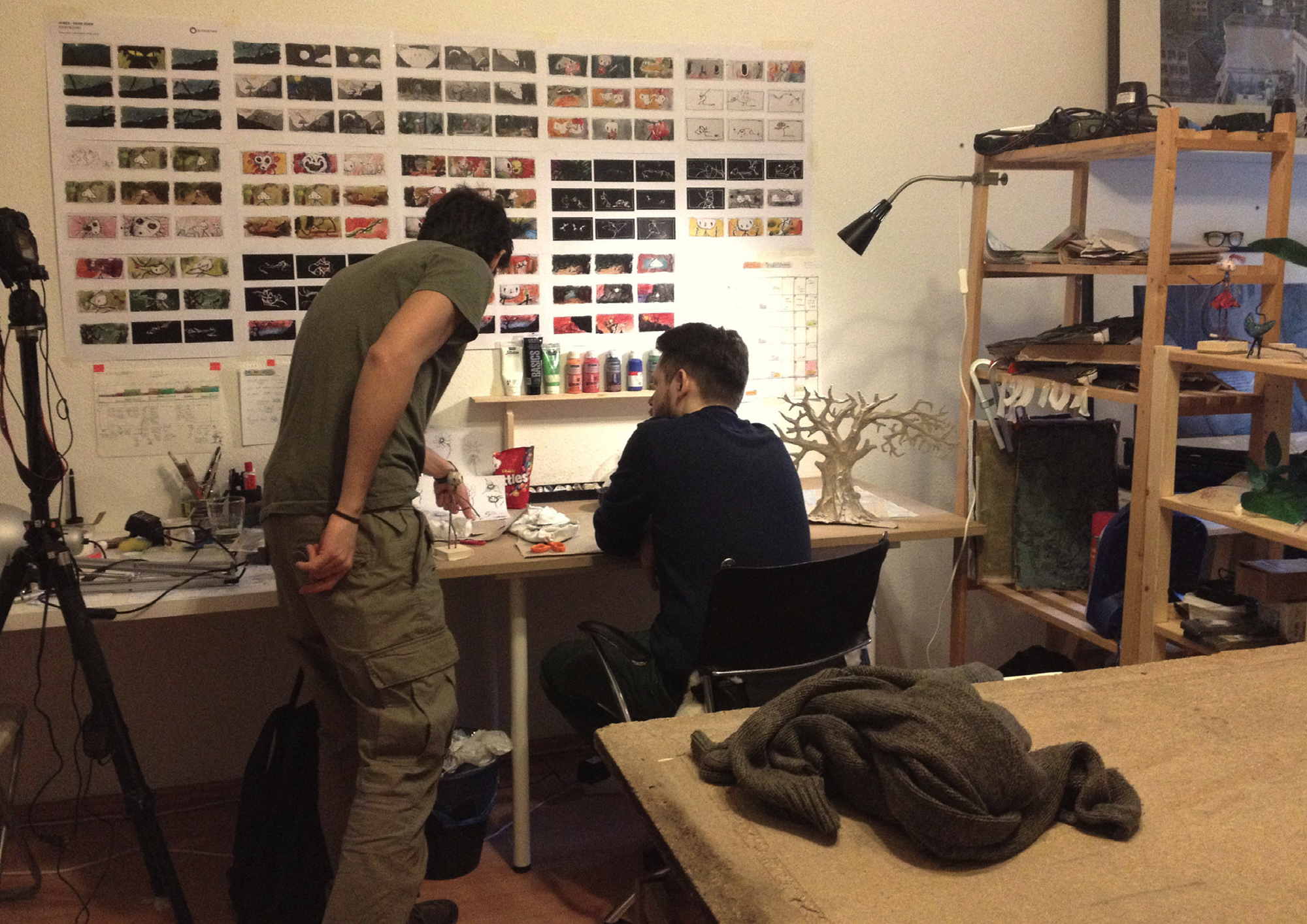 Throughout your work and again in this film you’ve created characters who are distinct but never feel over designed.  What was your process for defining the look of the characters across their various forms?

I tried to reach back to drawings I made earlier in Berlin. I had a few characters that were mostly just a line with a simple round head – those inspired the boy and the girl characters. I also went through my little sister’s drawings that I collected throughout the years and I found this very expressive looking cat that inspired the villain cat, and I found another character that I used for the double headed evil flower. For the other evil flowers I tried to search existing ones on the internet too. I like simple but expressive designs.

It’s a delight to once again see you bring a variety of animation techniques into a single piece as you did with Rabbit and Deer. Were there any planned elements you were ultimately unable to include?

I really enjoy the refreshing effect of mixing technics when making films so I always start with this question: how could I show things in different ways, what would be the best visual choice to express an idea? This time I used the 2d inserts to represent the boy’s flashbacks/hallucinations of their past relationships. I planned to show more of these 2d parts but the story was too complex and I needed more time for the stop-mo parts.

This is a project which clearly had lots of moving parts. What tools did you marshal to bring it all together?

I mostly used the software that I used in my previous films; Dragonframe for stop-motion, Adobe Flash and a bit of AfterEffects for the 2d parts and Premiere for editing. But the cinematography was different this time because I could borrow professional lighting equipment which included tripods, strong lights, color gels and camera rigs.

Last time, you spoke of a desire to direct some live action, is that something we’re likely to see soon? What areas is your forthcoming work taking you into?

I might be delaying my live action ambitions for a while. I’m about to start making a new poem animation like Streamschool and Satelllite Dish. When I’m done with that I will start to work on a personal project which I’d like to base on scripted dialogues of personal and a bit philosophical conversations. It’s a topic that I’ve been thinking of for a while and I’m excited to explore.