Exploring the often unresolved dissidence which exists between our public and private personas, dancer, choreographer and filmmaker Erin S Murray envisages this existential battle playing out in a suburban neighbourhood street at dusk in dance film HONNE. DN asked Erin to share how she translated this confluence of internal emotions into movement and what directors should bear in mind of when asking dancers to collaborate on their films.

As well as being a filmmaker you’re also a dancer and a choreographer. What advice would you give to filmmakers wishing work with dance in their films?

I’ve heard some unfortunate stories from other dancers who were hired to dance in a music video or commercial and they had no idea what the director wanted. Some filmmakers have no clue how to communicate with dancers to coax out the performances they’re looking for. This sounds like a horror story to me because it wastes time and nobody leaves the experience feeling good. My advice to filmmakers would be to know when you need a liaison between you and the dancers. Know when you need a choreographer or movement director.

What was the inspiration behind HONNE’s battle of self concept?

I’ve always had an interest in human psychology. What parts of ourselves do we hide, and what parts do we share? How often do we ignore our own thoughts, feelings, and actions just to protect an idealized impression that we have of ourself? With HONNE, I wanted to show what it feels like to discover something about yourself that you don’t like.

I was inspired by that childish belief that if you don’t acknowledge something it doesn’t exist.

The short wasn’t based on any specific discovery. It was based more on a behavior I notice in others and try to acknowledge within myself. I was inspired by that childish belief that if you don’t acknowledge something it doesn’t exist. People ignore things to varying degrees just to preserve their sense of identity. An example is a person who won’t acknowledge they have an addiction until the circumstances are so bad they don’t have a choice. In HONNE, the dancer is the unwanted feeling, behavior, or trait; and Tatemae is a person being confronted. 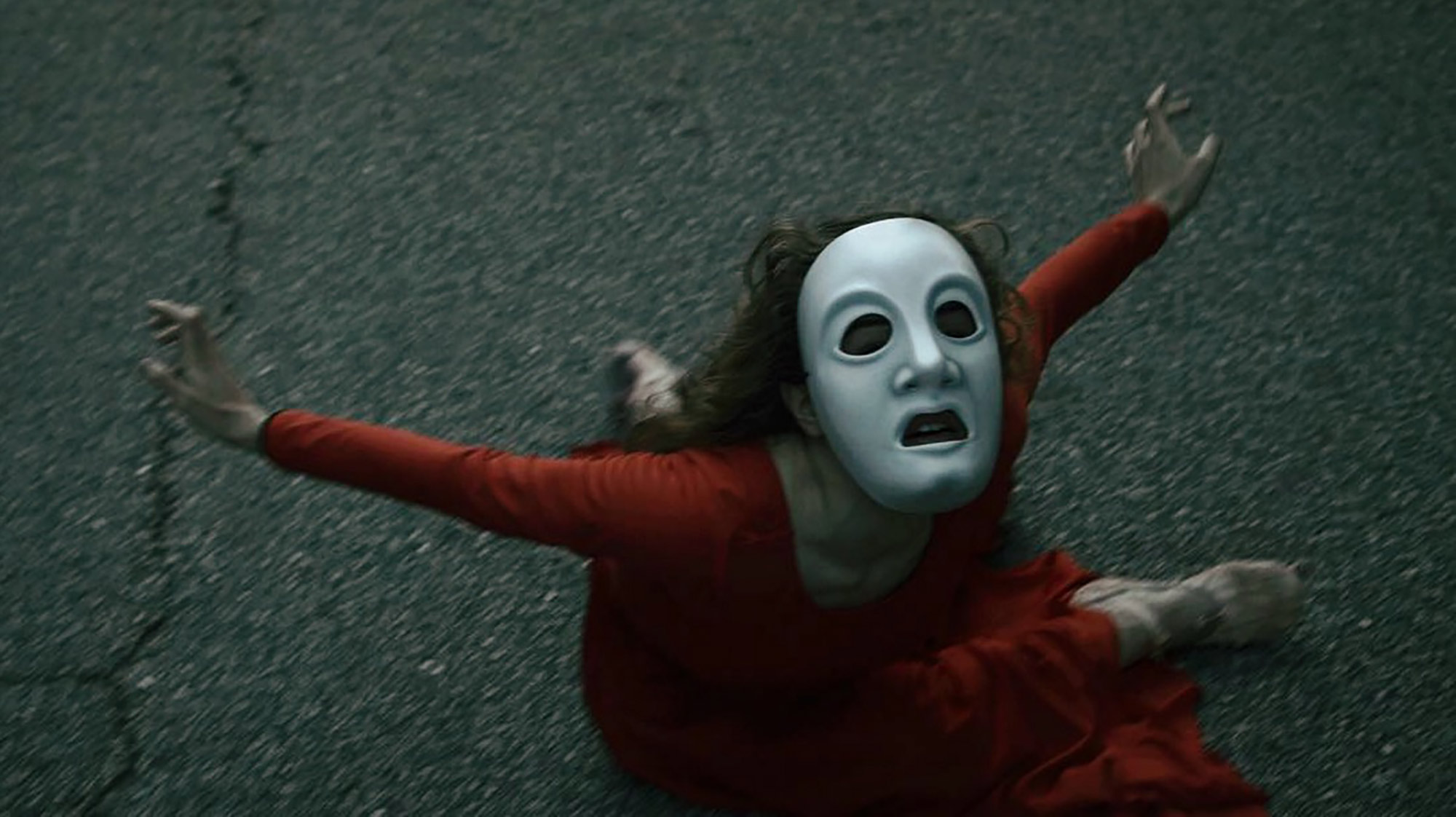 The mask itself is rather unnerving, where did it come from?

I used a mask because I wanted Honne, the dancer, to feel as alien as possible – the way she would initially appear to the other character, Tatemae. The mask also facilitated the reveal at the end of the piece. I ordered the mask online from strangefacemasks.com.

By its very nature a dance film needs to convey character and narrative through a combination of movement, music and performance. How did you combine those elements into a cohesive whole?

Once I found Forbidden Place by Yoshimi after a deep dive on Bandcamp, I worked out the shot list to fit the music. I wanted the opening to feel like a suburban housewife was experiencing a western movie showdown in a fever dream. Next came the choreography, which came in tandem with character development. I wanted the masked character I performed, Honne, to fluctuate in an emotionally manipulative way towards the character my mom performed, Tatemae. I spent a few hours exploring body language extremes before I settled on Honne’s physical language. To build the Tatemae choreography, I spent about an hour messing around in the dance studio with my mom. My mom is not an actress or dancer, but I’ve always believed her to be a natural performer. I’m really impressed with her conviction in the piece, especially since I asked her to do some pretty silly movements with her face.

I wanted the opening to feel like a suburban housewife was experiencing a western movie showdown in a fever dream.

When it came to filming, we had to work super efficiently since the whole piece needed to take place around dusk. We shot with a Blackmagic pocket camera, and the cinematographer, Alex Allgood did an awesome job operating the Ronin while also being my eyes when I was in front of the camera. After we filmed everything on our shot list, I spent about ten minutes improv dancing with Alex. As a performer, something special happens when you allow yourself to be in the moment while filming, and the improvised moments are some of my favorite in the piece.

I’ve really been enjoying your Dance Insight series. What was the catalyst that sparked these portrait pieces?

It was my childhood dream to be a prima ballerina in a prestigious ballet company, so my entire world revolved around ballet for most of my life. However, in my late teen years I became disenchanted with the ballet world. The rigorous standards of ‘perfection’ set by artistic directors and ballet masters especially regarding body type felt more oppressive than liberating to me. All I cared about was what the director thought of me, and I realized I was training myself to be a tool for someone else’s vision. That wasn’t the kind of dancer I wanted to be. I decided to go to college where I had a film professor who encouraged me to make personal films. Even though these films were about other dancers, the whole process of making them was a way for me to explore my own relationship with dance and my ever evolving notion of ‘perfection’.

What do you look for when selecting subjects for the series and what dictates the locations for their performances?

I’m always looking for dancers I feel I can learn something from. Of course, I wanted dancers who were compelling movers, but it was just as important that they had their own point of view regarding their craft. Since I’m a dancer myself, I’m lucky to be surrounded by other artists that inspire me all the time. I basically just have to keep my eyes open and listen.

I’m always looking for dancers I feel I can learn something from.

Both Nicole and Nadia who are featured in the insight series, are dancers I watched when I was a young girl in ballet school. They were both company dancers of Atlanta Ballet while I was in the school. It was pretty fun for me to work with people I looked up to as a kid. With ET, I knew I wanted to feature a freestyle dancer, it was just a matter of meeting the right person. I was lucky to meet a freestyler in one of my college classes who invited me to dance battles. I went to the battles to observe, and I noticed ET very early on. We hung out once over coffee to get to know each other, before we decided to work together.

Locations were super vital for these films. It was important the locations were both visually appealing and helped tell the dancers’ stories. The location for Nadia was a no brainer to me. Ballet dancers spend at least 90% of their careers in the dance studio training and preparing for the stage. It’s very formal – there’s a dress code when you’re a student. Also, as a ballerina you spend endless hours working on yourself almost like a sculptor and there’s a real sense of isolation there. So having Nadia alone in a room felt right to me. I knew from ET’s own videos of himself dancing he had online that he could perform his style anywhere and everywhere. ET talked a lot about being in “the mode” so I looked for natural lines in the environment that helped communicate a sort of laser focus. With Nicole, I chose the location more instinctually. It just felt right.

Aside from the dance sequences themselves, which are of course central to the series’ theme, the dancers provide what feels like naked insights to their relationship with dance. How do you tease out such open and heartfelt testimonials?

I told the dancers some themes to be prepared to discuss a few days before we sat down together. When it came to the actual interview, it was just me, the dancer, and a zoom recorder. I went in knowing I wanted to steer the conversation towards their relationship with perfection, but I didn’t lead with that. I started each interview by asking them to explain when and why they started dancing. I tried to ask questions that would lead to stories rather than short answers. In the end, I let my curiosity lead the interview, and the themes I planned to discuss came up naturally. I think the dancers were open with me because they knew I was a fan, and my intention was to celebrate their work.

I’m hoping this is an ongoing series. Are there any episodes planned you can tease us with?

There will definitely be more dance insight episodes to come. I’m currently focusing my energy on a few narrative projects as well.