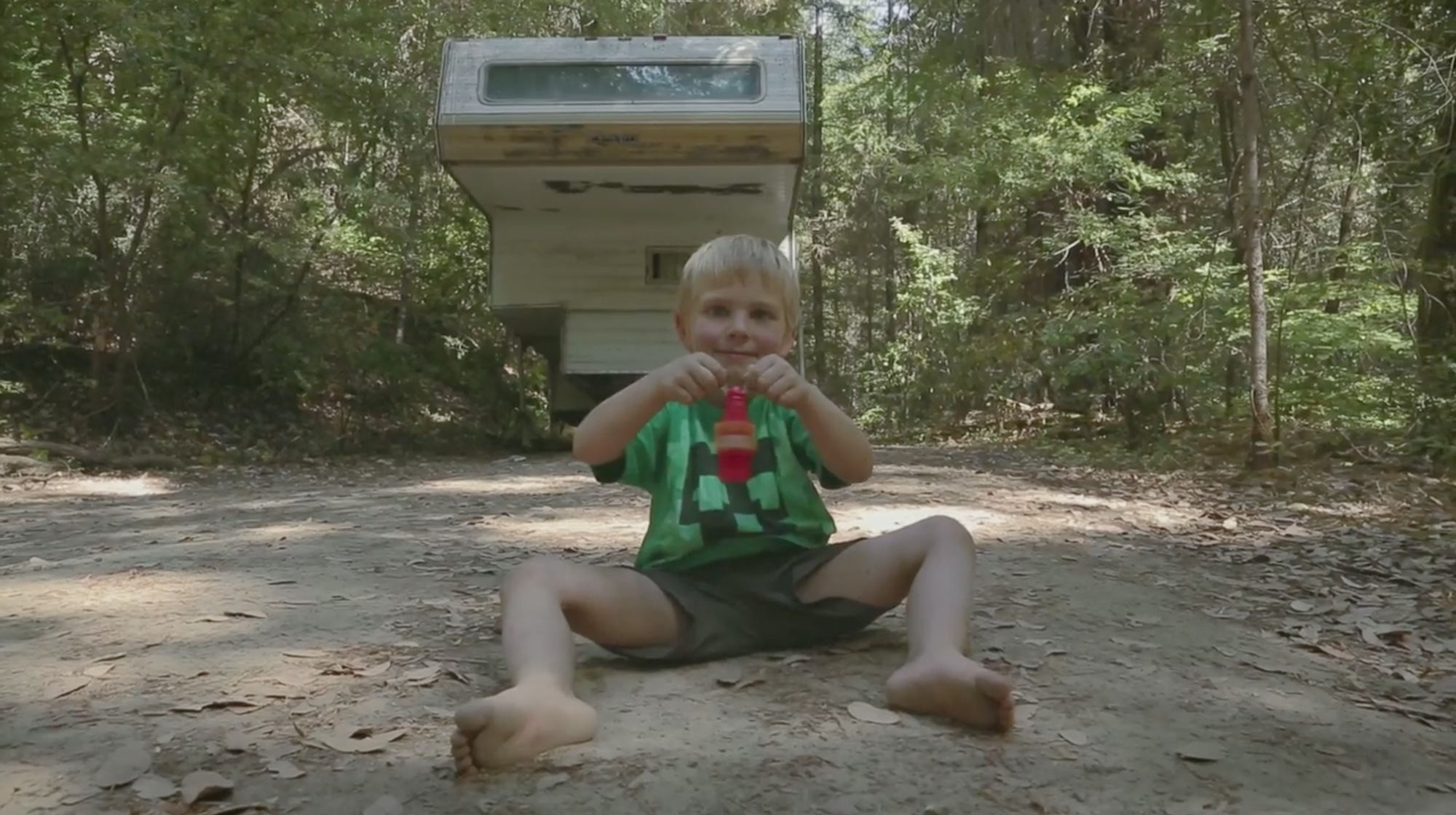 It’s a sad fact that there are an increasing amount of people who fall unnoticed through the cracks of society into insecure existences defined by poverty. These stories of life on the fringes rarely make their way to our screens, especially not in the realm of music videos – which is why watching Kieran Behan’s Somebody is for The/Das stopped me in my tracks. Shinning a spotlight on California’s forgotten homeless community, Somebody is serves as an eye opening reminder of the widening gulf between the haves and have nots, and our shared humanity which should make us all want to do better for each other. We speak to Kieran about the roots of the collaborative multi-disciplined creative force that is crystalmafia and the fortnight she spent living out of a van to capture this thought provoking documentary/music video hybrid.

crystalmafia seems to have its hand in pretty much all forms of creativity. Is there an ethos which binds the collective together and informs the work you do, regardless of form?

I would say the climate of the music scene we were surrounded by in California started to define a particular sort of feeling. I never thought about being a “collective” during those San Francisco days. We were a band of weirdos on the “lot” scene, which was the parking lots of jam band festivals and concerts. A seething swirling scene of drug dealers and burrito slingers, nitrous balloons and tie died scarves. I clearly remember one woman running through the lot one day selling her breast milk. Anything and everything goes. A lot of hustlers judged their status with this kind of wire-wrapped jewellery – the larger the esoteric crystal around your neck, the more powerful you seemed to be. So I thought it was a funny play on words to call us girls “crystalmafia”.

We were watching the whole decay of this really powerful counter-culture movement that the late 60s had brought to San Francisco and the world at large – the electricity in the music scene throughout the past decades had decayed into something drawn out and bitter. Everyone was searching for a feeling that had long disappeared and I was hoping to provoke something by being in this rag tag band of misfits. We didn’t have a binding ethos or any sort of formal art school education. It’s not so much a disregard for form as a sort of instinctual feeling. To create something because you are so utterly caught up in the moment that creativity is exploding out of you at such a furious pace that it should and could be harnessed into some sort of output.

How did our wilful blindness to the homeless become an important issue for you? Why did you choose to explore the subject in this hybrid documentary/music video form?

Before I moved to Berlin I lived in both the mission and tenderloin districts of San Francisco. I remember when I first arrived I spent 2 months sleeping in my 1991 beat up SAAB convertible because I couldn’t find a place to live. I have always had an affinity for people going through the throes of survival on the street. We were all in this together, and lack of a roof over your head doesn’t change the fact that you have a heartbeat.

We have a serious issue with our empathy. Most of the world’s problems boil down to this situation.

San Francisco has gone through an overwhelming crisis with its psychiatric clinics, many people get thrown out into the street. Combine that with drug infestations, poverty and clean the streets ridiculousness from other American cities… It’s an epidemic and a reflection of the times we live in. We have a serious issue with our empathy. Most of the world’s problems boil down to this situation.

The second I heard Somebody Is it sounded like an anthem, a protest song of sorts. I was traveling with Fabian Fenk (The/Das) at the time and we had this deep down feeling to start shooting something for this song. So we just jumped right into it. We were going to start this film no matter what. Sinnbus (the record label) was incredibly supportive and helped fund our flights home to Berlin afterwards. Everything else financial we covered ourselves.

You were living in a van shooting footage out on the road with Fabian for 2 weeks along the Californian coast. How did your days go?

I have a nostalgic deep rooted love for the nature of Northern California – the PCH with it’s winding roads alongside sea cliffs with the smell of eucalyptus flooding over everything. The ancient redwoods so beautiful and silent and solemn. I also carry a deep concern for what’s happening in this part of the world – fukushima blasting the coastline, the incredibly savage drought, severe consequences we see with animal agriculture and the deliberate denial of so many people watching all of this unfold. I wanted to live in a van and be up close and personal with everything we were seeing and feeling. 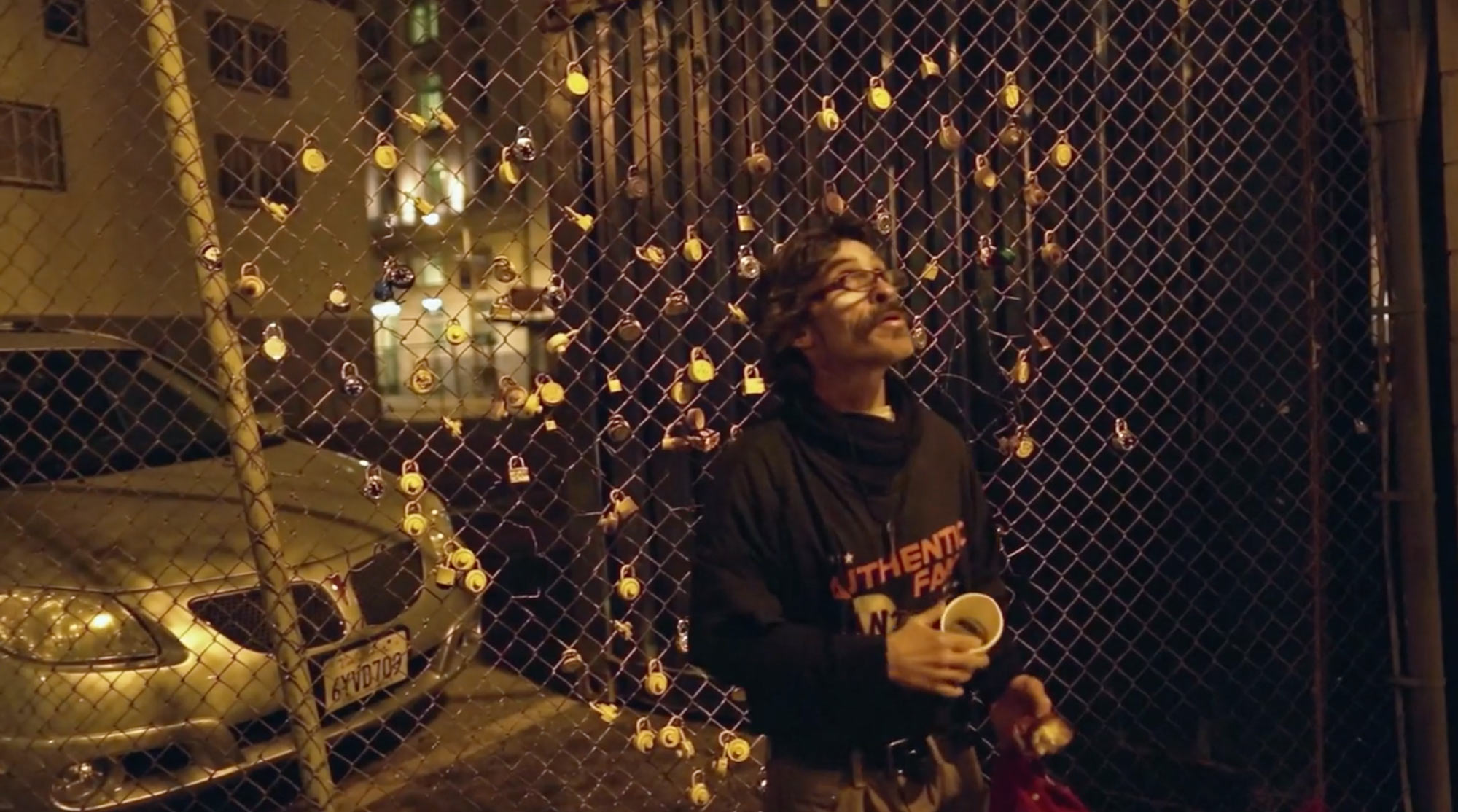 We started noticing that more people were living on the streets then we had ever seen before. And they all had their own stories to tell. I saw pain and loneliness and strength and wisdom in their eyes and I was curios for connection. So it was an organic twist of fate that pointed us in this direction and started to define our topic.

I’m naturally sensitive and shy when approaching people, and it’s the inner kind of sixth sense to walk down a certain street or sit in the forest because you feel someone is coming. You have to hang out and realize nothing else exists besides that moment in time. Lots of people wanted to talk but wouldn’t agree to be filmed. Some just wanted to share a slice of pizza or a cup of tea and talk in poetics. Then those magic few we really connected with wanted to share their world with us. I think the best advice is to just feel very peaceful with this whole process. The longer you spend somewhere the more the trust has time to take root.

Knowing you’d be baseless (aside from the van) for that period, what was in your kit bag ? Was there anything you wish you’d had or had to improvise around?

We wanted to live in a van for 2 weeks because that was how we could be closest to the project. I’m a minimal girl and hadn’t planned the film in advance, just had a digital SLR, a few batteries, flash cards and my favorite 24mm lens. When we hit San Francisco I loved the way the water was glimmering by the bay bridge in the full moon’s light so we parked the van, jumped out across the street and literally filmed for a minute or two. We walked back and our car windows had been smashed. Laptops and sadly my polaroid camera gone! Stolen with my hard drives. Luckily I had my camera around my neck. It was a moment of feeling completely violated. Fabi being the clever person he is, had an idea they had just grabbed the stuff but ditched the cases and went running on a spree going through all the dumpsters and trash he could find within a few block radius and sure enough came back with one of my hard drives and the computer cases in his hands. SO LUCKY.

It made us realize we were following the right story. That people are in a state of desperation. So in that sense it made me feel that much closer to the project. So yeah, we improvised. No computers to dump cards so we asked strangers we met at coffee shops if they would help us. We charged batteries where we could and took breaks when we needed to. An amazing guy sold me his SX-70 camera just out of Santa Cruz as a replacement. I didn’t wish for anything else because I liked to focus on being grateful for what we had.

How did you come to choose Polaroid as the format of choice for the behind the scenes stills?

I’ve been polaroid obsessed since I was a very little girl. The SX-70 is my favorite, constantly traveling with me. I am very lucky to be supported by the Impossible Project– it was very sweet to always have this particular film on my adventures.

You’ve spoken of Editor Robin Thompson’s intuition when it came to cutting the footage, what did he bring to the project?

Robin is great! When we got back to Berlin we felt completely overwhelmed with all the footage, and too emotionally attached to certain scenes. Robin got a bit of direction from us but inherently he mixed footage in a way that made sense. It was the first The/Das music video where we let someone besides ourselves edit and it was completely relaxing. Robin has since then edited our latest collaboration with the Manifesta Biennial and will surely collaborate a lot with us in the future.

I’m in the business of feelings – the good the bad and the ugly. So as long as you felt then you must be alive.

We’re guided through the stories by subtitles, was that format immediately established?

We tried everything – the footage without subtitles and just the song playing. We took the sound away and just had the field recordings off my camera. In the end I love to mix the awkward confusion of: Is this a music video? Is this a short film? Should I be watching a documentary? Some people love how the song combines with the testimonials and of course some found this alienating.

Where do you want viewers to arrive emotionally or with practical action after watching the film?

I don’t want or need viewers to DO anything. I’m in the business of feelings – the good the bad and the ugly. So as long as you felt then you must be alive.

Do you have any other projects coming up?

We just finished a very cool collaboration with Christian Jankowski and the Manifesta Biennial- it’s called What People Do For Money and also a music video for The/Das. In the coming months I will work on my first screenplay for a cinematic documentary that will share environmental and emotional stories on what is happening right now in the Amazon forest. I spent 6 weeks deep jungle last fall shooting a Virtual Reality video for the COP21 summit and it sparked something very intense inside of me. I hope to go on a scouting mission with my partner in crime and fellow filmmaker Marie Alice Brandner-Wolfszahn this winter.