Me And My Drummer: Grown Up Shape

When we last saw Director Chris Luehning on our pages, he very candidly spoke of the difficulties which can arise on a music video commission when the filmmaker and band don’t see eye to eye. And while his collaboration with Berlin’s Me And My Drummer for their Grown Up Shape music video was a much more cordial experience, themes of frustration were at the forefront of the project as Chris strove to express how an artist feels as they strive for, but never achieve, perfection in their work. DN invited Chris to explain why howling at a neon moon is the mark of a true artist.

At the beginning of the year Me And My Drummer asked me if I was interested in working on some live visuals for their Love Is A Fridge album release tour. We’ve collaborated before so the chance of working with them again got me really excited. They shared a couple of new songs with me and one of them in particular totally blew my mind. It was called Grown Up Shape. Charly said she could see an animated cartoon wolf howling to the moon as a visual backdrop which immediately sparked my imagination. I always love the moment when your next big project takes shape in your mind. I wasn’t sure if I could pull off a whole animated story with a cartoon feeling but I was totally up for the challenge. 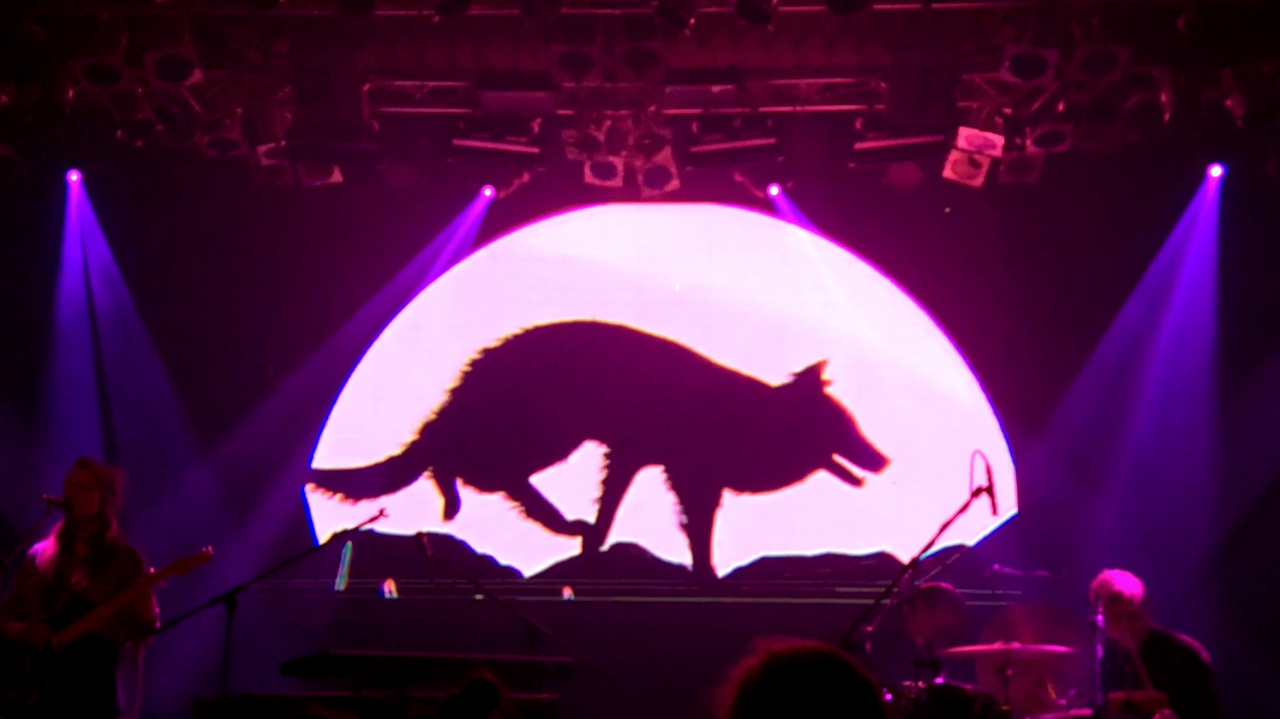 I started working on the visuals in February and in April they started touring. The version of the clip they used at that point was more of an outline than a finished video. They liked it so much though that we figured it would be totally worth it to dive deeper into the world of the wolf and turn the visuals into a proper video for the song. I was thinking about the relationship between wolf and moon and how it is a symbol of a strong longing that can never be fulfilled. Which in turn made me think of the story of every artist. We’re always driven by some distant desire. Something very elusive that we can sense, something that is always present in our minds, that we constantly strive for. But we will never actually reach it. There won’t be a final satisfaction. There will never be a point where the artist finishes a piece and thinks to himself – “This is it. I’ve reached my aim and now I’m done doing art.” Just like the wolf will always howl to the moon, the true artist will always push forward and keep creating out of an unsatisfiable urge.

There will never be a point where the artist finishes a piece and thinks to himself – “This is it. I’ve reached my aim and now I’m done doing art.”

I put in quite a few more ideas that were very important to me during the last few months. Some more obvious, some less. I’m just gonna mention a few. I’ve been reading Carl Jung’s Man and His Symbols which deeply affected me. He talks about the ‘Self’ being called ‘the great man’ by the Navajo Indians. Only if you listen to your intuitions and dreams, take them seriously and live by them, can you start on the path of individuation to become your true Self. So the big wolf at the beginning of the clip is the Self calling for the young one. Without hesitation he embarks on his journey. He’s so full of trust that he doesn’t even stop for the biggest obstacles. On his way he encounters old forest beings who symbolise the old masters and important people we keep meeting on our own path. People that act as catalysts and great helpers. People that pop into our life for short amounts of time, but play the most important roles for our development as artists. The more I think about it, the more I feel like those kinda encounters are even more important than any of the aims we might wanna reach with our work.

As for the animation process, I only used Cinema 4D and comped it in After Effects. I’ve been playing with Cinema’s sketch and toon module for other projects before but this time I really dove deep into it. It is super powerful and rather quick to render, which is always an important factor when you work from your MacBook. So everything you see is 3D modelled, but rendered with various different stroke settings to get exactly the details I wanted. I always loved cartoons from the 80s and early 90s and tried to recreate at least a little bit of that kinda feeling without it being retro. I also can’t seem to help it and always have a psychedelic touch to my work. It just adds another layer of interest to me since reproducing the psychedelic experience is probably my personal moon that I keep howling to but won’t ever reach. I’ve got high hopes for virtual reality to get me closer though, so my next project will be playing in the VR realm.

Chris Luehning, Germany, Me And My Drummer, Music Video