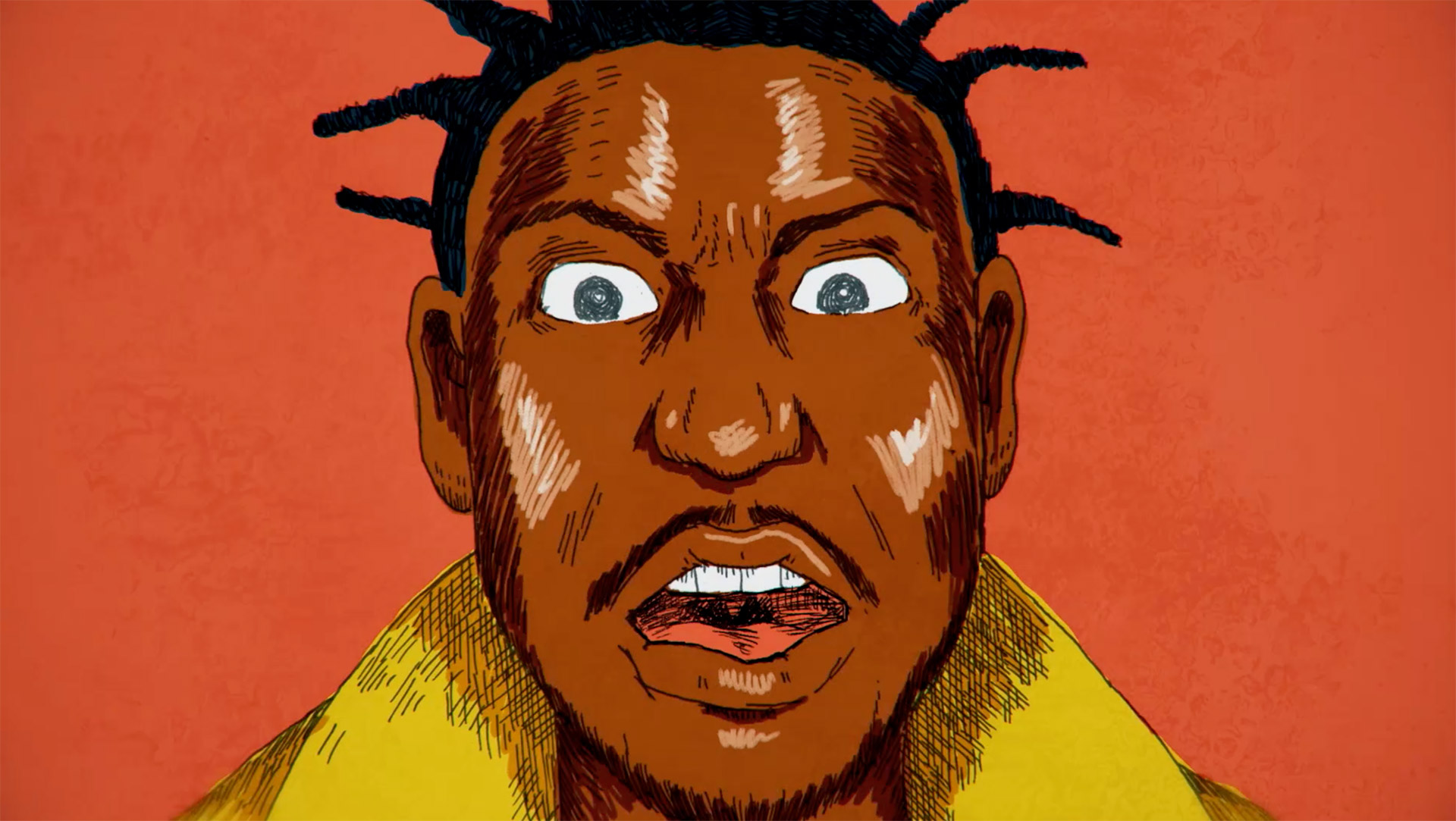 From Kurt Cobain to ODB, filmmaker Drew Christie joins us to the discuss the stories and styles of his animated series revolving around the myths of modern music – Drawn & Recorded:

‘Drawn & Recorded tells the stories that fell through the floorboards of music history and brings them to the light of day via unique, hand-drawn animation and the raspy, baritone voice of T-Bone Burnett. Sometimes hilarious, occasionally tragic, always compelling – these anecdotes show a side of people behind the melodies that you may never have known.’ – watch the entire series on Spotify (you’ll need a Spotify account)

How did the Drawn & Recorded project originate and how did you go about choosing the stories to feature?

Drawn & Recorded is a culmination of my whole life essentially. I have always been immersed in music either playing it, listening to it or reading about it. Music is so mystical and unexplainable that I’m always drawn to the challenge of trying to visualize that magic. I also thrive on story and you almost always need humans to tell stories, so it’s only natural to examine the personal histories related to the music. I’d known about the story of the Golden Record on the Voyager spacecraft, but about a year and a half ago, I re-read a great article by Mike McGonigal in Yeti while I was taking a bath and decided I had to animate the story of Blind Willie Johnson. At that point, wanting a musician with a connection to Blind Willie to narrate it, I asked T Bone Burnett if he would be interested. He agreed to narrate and when it was completed, he liked the animation so much, he started showing it to people who he thought might want to help us make a series out of these, with each episode about a different musician. From there we teamed up with Bill Flanagan, Gunpowder & Sky and then Spotify.

None of our scripts about women musicians were chosen in the first round.

I did get a choice on which stories were done, however, we were prodded in certain directions. If it were left completely up to me, every one of these would be about relatively obscure musicians from the 1920’s and 30s because that era really interests me. However, most people aren’t in that zone. So we had sort of a story from every decade of the twentieth century, touching on a range of people in different genres from blues, to rock, to country to hip hop to metal. We wrote a lot of scripts but only 10 were chosen for the first group. Disappointingly, none of our scripts about women musicians were chosen in the first round but we have scripts on Karen Dalton, Sara Carter and Nico to name a few.

I really love the style of the series, it really feels as if the aesthetic adds an extra dimension to the storytelling. How did you approach the visuals for the project and how much did the stories influence them?

I like to have the visuals match the tone and imagery of the story, the challenge for me was that each of the 10 episodes also needed to feel cohesive as a group. The music itself inspired many of the style or color choices in certain episodes. For instance, Lonesome Fugitive (the Merle Haggard episode) a lot of Merle’s album covers are blue, he wore a lot of blue, he sang songs with “blue” in the title (like his cover of Jimmie Rodgers’ Blue Yodel) and my horoscope told me to make it all blue so I felt we should make it a monochromatic blue palette for the whole thing.

While the Neil Young and Rick James episode is all shades of yellows because I think of a sort of faded, dusty yellow when I think of Neil Young (probably because of the Harvest and On The Beach album covers). Other times, an element from the story themselves informed the visual approach, like on Blind Willie in Space, there’s so much mention of stars and constellations, I thought the whole thing should be inspired by a constellation map and only be white lines on black background.

How long did the films take you to complete and what was the process?

We had about 2 weeks to animate each episode and there were 10 episodes total (although 1 was done already when we began). So we were working on them from June until late October 2016 (19 weeks). We had all the scripts written before animating of course and we were working on those for a few months before we started animating.

We did all the art by hand with ink pens on paper.

There was myself and then 5 to 6 other people helping animate on each one. I would storyboard with Gabe Adams, then we would make keyframe art and Riley Luce, Amanda Moore, Dane Herforth and Ashley Eriksson would be doing in betweens and coloring frames and then Dane Herforth, Ben Markus and myself would comp the shots and edit together the finals.

We did all the art by hand with ink pens on paper, then scanned in every frame and colored them individually in Photoshop. Then comped together in After Effects and edited in Premiere. Spencer Thun did all original score for them usually inspired by the style of the subject of each episode.

I’m hoping to make a lot more of these, we want to do hundreds of them. I am also hoping to make another animated series I have been planning for a long time called Kropotkin & Wolf, which is in the style of a 1970s Soviet children’s cartoon.

One Response to Drawn & Recorded