French Motion Designer and Animator Pierre Emperador has been dabbling in the creative arts for the past six years. His new personal animation Seven & Light, brings into being a story rich in colour which exudes a tenderness and warmth fused with airs of lugubriousness as it recounts the story of a child living alone on a planet who paints faces on rocks to fill the void of a missing family. I invited Pierre to share the creative processes behind his curious tale of longing.

What inspired you to make Seven & Light?

Like almost all my projects, the concepts came from my own experiences, through discussions with family, friends and jokes. I have known for some time that I wanted to tell a story, more ‘cute’, lighter and less dark than my previous personal projects. After several attempts to write a script, I quickly found the main structure that was gradually expanded, in the same way a tree grows and expands. The story of Seven & Light is inspired by a simple question – what would life be like if I was alone on a planet, to only paint my family’s faces on rocks? All of that with a little bit of magic 😉

Imagination is, in my opinion, one of the pillars of life, one of our rare freedoms.

How did you decide on the tools you would use to achieve the desired aesthetic of the film?

I tried not to think about the techniques I would use for creating the piece too much at first through fear of it bridling me. Then once I had the main basis of the story and some storyboards drawn, I tested many different ways I could represent the images that were in my head, trying not to restrain any of my ideas but to instead remain open to any concept. Mixing 2D & 3D was done naturally to save on rendering time and to keep the ‘raw’ element that I really appreciate. Things are never perfect, I like these small imperfections, these dynamic and fiery painting strokes. 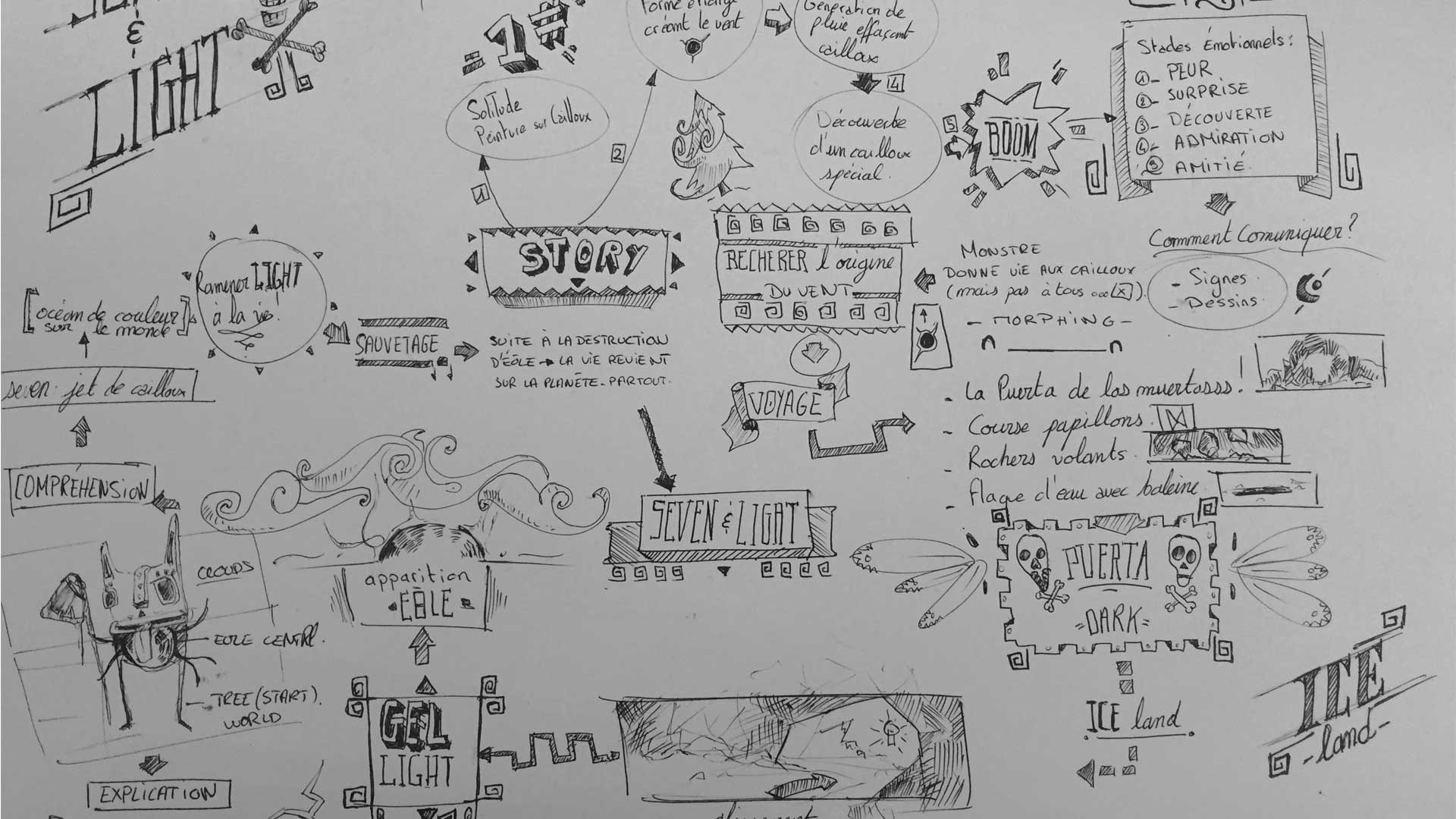 The majority of the landscapes in Seven & Light were created using a ‘fast speed-painting’ design process. Can you tell us a little more about the technique and your reasons for working in this manner?

I like to have a very rough rendering without too much detail, but enough to express different feelings serving the narrative. For Seven & Light, I almost always started with a very fast sketch, blocking shapes quickly and then adding atmosphere and details. I needed to get things moving quickly in this process and to get a rough render of my scenes. I made some landscapes in Photoshop, then I placed them as textures in Cinema 4D and Toon Boom, and had 1 second per frame for the render. That’s why I called this process ‘fast speed painting’. It’s rough, there’s not so much detail on the illustration, then a quick render in 3D. 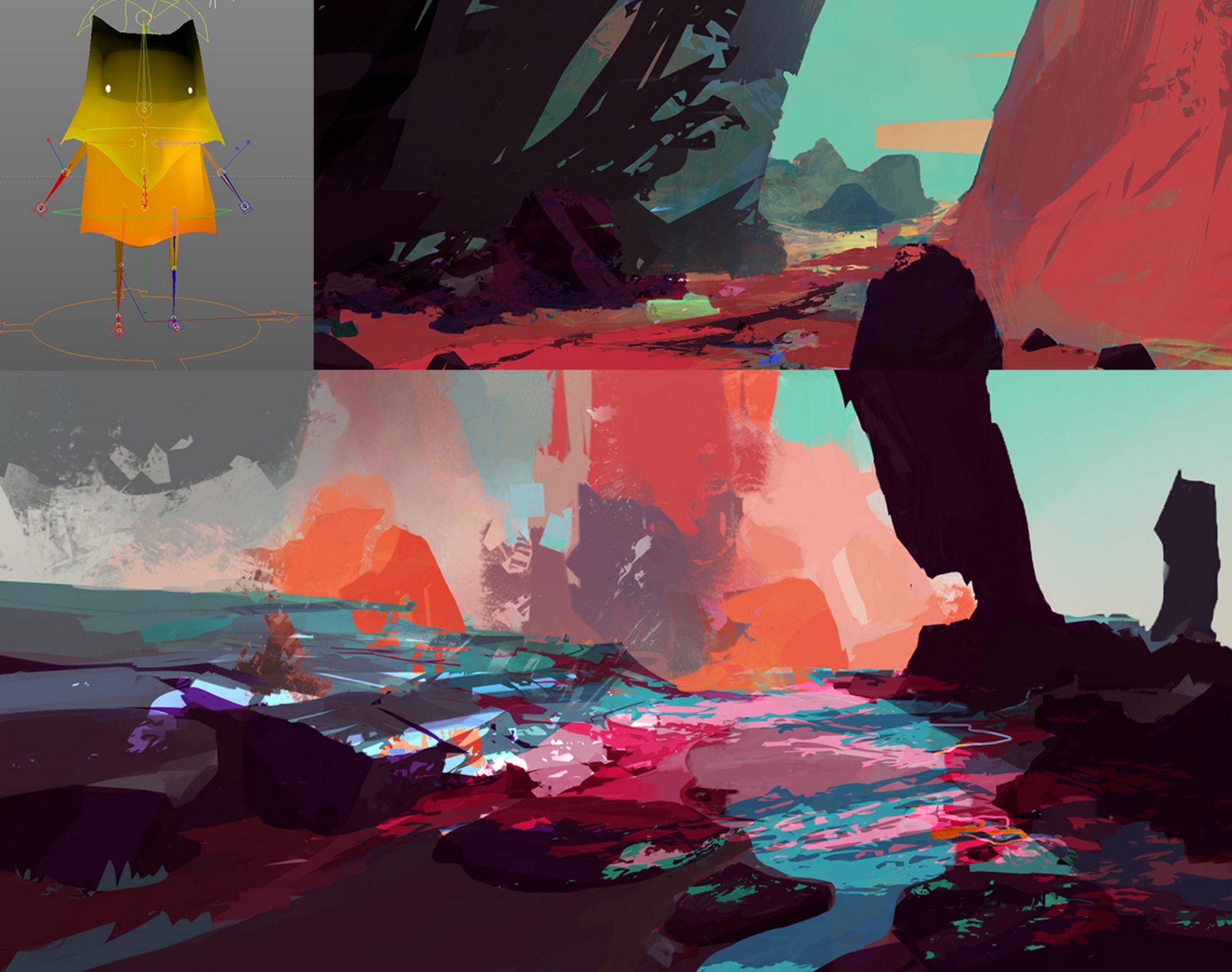 The film has structure and a storyline, but at the same time is abstract and open to interpretation. How do you embody these two seemingly opposing narrative forms congruently?

I always try to put a part of myself in my projects, creating scenes, story, atmospheres sometimes concrete and sometimes more abstract, I can direct the viewer to follow a story or a feeling. I let the viewer imagine what he wants by guiding him only very slightly. In the same way that when we look up at clouds we all see a different image. Imagination is, in my opinion, one of the pillars of life, one of our rare freedoms.

What would you say to filmmakers about to jettison a project?

I have spent two years of my free time on this project. I don’t think it’s a great movie, but a film made with the heart, and I encourage all those who have a story to tell to never give up and to make it to the best of your abilities. Whether it be writing, drawing, music, singing … or any other enterprise! Believe in yourself!

What future delights do you have planned?

I have a notebook filled with notes and sketches in which I already have some concepts that I will try to develop as soon as I have a little time. Meanwhile, I still have many techniques that I would like to learn to make the next film. I can only invite you to follow me on the different social networks in order to be aware of the latest news 😉