There is a lot for people to feel down about in today’s society: the hatred and divisiveness of politics, the constant fear of time, and the stresses placed on the younger generations. However, no matter what we have to deal with love and relationships still manage to connect us, and it is these enduring couplings which are championed by Jimmy Marble in his crowdfunded short End of Babes. DN caught up with the Los Angeles based-director to talk about his creative invention, casting for the short and how he feels End of Babes reflects today’s society.

Whilst gazing over your previous work, I noticed that you appear to be a creator who loves variety. Your work never seems to be predictable, is this intentional or more organic?

Definitely intentional but also organic. I’m always trying to improve myself, make myself better and more interesting as a person. I’m always looking for new movies, new journalists, new points of view, new music to enjoy. I don’t want to just enjoy the same stuff over and over, and my hope is that this pattern of experiment and play shows up in my work. I also really get bummed out when artists I like just stay in the same loop. I think that’s also why I try to always be doing multiple types of art from murals to set building to movies to design. I really don’t want to get put into a box. Because the second you’re well known for doing one thing, that’s what people expect of you. But if you get well known for doing whatever you want, my hope is you can write your own ticket. Who’s got time to rest on their laurels? This is a marathon.

As an artist who works both in the realms of photography and cinema how clear is the delineation of new ideas between the two mediums?

They’re pretty separate thought processes. With movies it’s so clear in my head — there’s this character who’s got this going on, and they’re interacting with the world like this. And they like this music, but this kind of music keeps playing. In my head the idea of this person’s whole world shows up, and I think about them moving around, and that’s why it’s a movie. With my photography I think in moments and aesthetics. I still try to make the photos character based, but I view it as more of a tableau. A challenge to tell a story or give off an impression in just a moment. It’s an equally fun challenge.

I thought when we made End of Babes we were living in peak apocalypse, but oh my god was I wrong.

This is a film clearly based around the theme of endings, in what ways did our current culture and society influence you to take End of Babes down this path?

I’m really fascinated with the apocalypse and that so many people are expecting it any day now. Most of my community in LA have pretty personal and evolved ideas on religion and spirituality, but none of us are really the destiny/end of days kind of people. So I feel pretty removed from the idea that there’s a clock counting down somewhere. It’s a weird type of nihilism to be so dependent on the apocalypse as people can be. The apocalypse really takes away a lot of accountability to fight for good because who cares? It’s ending anyway and then we’ll just be out of here. So the movie was inspired by the thought that maybe they’re right and I’m wrong and instead of worrying all the time, maybe we should’ve just been enjoying ourselves while we’re waiting it out.

Meanwhile, I think we’re absolutely obsessed with the apocalypse as people. Not just the Biblical one, but the every day one. Turn on any news channel that leans in any direction and you can spend a whole afternoon being told about all the ways that the world’s ending. I thought when we made End of Babes we were living in peak apocalypse, but oh my god was I wrong. We shot the movie in Summer 2015, and that awful summer looks like a room with a view compared to where we are now. It’s also inspiring that people still fall in love, even when we’re living in a world that’s falling apart at the seams.

It feels we should be way past this by now but it was refreshing to see two leads of different races romantically involved without that being the film’s subject matter. Was this something you were conscious of when casting?

Sort of. I always try to cast a variety of people into my projects. I didn’t write ‘hot white woman’, ‘hot black guy’ into the script. It just wound up being cast that way through trying to find actors I trusted with the roles. Theophilus Martins and I became friends about a year before we shot End of Babes. The guy character was based on me and my past experiences, and some people had suggested I play the role. But for a lot of reasons I thought that was a terrible idea, namely because I’m not an actor, and also because I wrote it and directed it, and wanted a fresh take on the character so it wasn’t just JIMMMMMY’S MOVIE! Then, one day out of the blue Theophilus tweeted, “I am the black Jimmy Marble”, which was hilarious and I took it as a sign that it was meant to be. Because Theo didn’t have a ton of acting experience, I thought I should cast the girl with someone who did so they could balance each other out. Gillian Zinser and I had become friends on social media and I asked her if she’d be interested in being part of it and she was.

What was your process of working with them to build their playful rapport?

They’re just talented, beautiful people. We rehearsed and talked a lot about the characters, and then on set they came prepared. From where I was sitting it just felt like they liked each other. It was fun to watch.

The reflective delving into relationships provides the backbone of End of Babes. How did relationships in your life shape the vision for the film?

The story is based on a real conglomeration of romantic moments that I’ve wanted to find a way to share for a long time. In life so many beautiful things can happen to you that are difficult to translate to a conversation. So I have these memories that I’ve always liked, but haven’t really been able to share because conversationally, who cares? But it’s easier to communicate why they’re beautiful in a movie because you don’t have to be so literal and so, “This was an extremely beautiful moment I had”. Instead, there can just be characters eating raspberries in a bathtub, and maybe some people didn’t even notice that they were. But it was my way of sharing a favourite moment that I had been thinking about.

The colour palette plays a massive part in signifying emotion and tone in the short. Were there particular reference points for the production design?

I love Northern pre-Renaissance paintings, and the way they set religious stories into their present-day Europe. They used the colour red and the colour blue a lot. And because I felt like End of Babes was kind of like that, a religious story set in present day, I wanted the guy and the girl to be wearing those two colours. There’s more red in the movie, though, because I also wanted there to be a through line of blood because the world was ending, and blood always shows up when the world’s ending. So red, and also blue.

How did you construct the film’s rhythm during the edit?

Casey Swoyer edited the film, and I feel like he really understood the story and elevated it. Neither of us were precious with the footage and were both willing to cut whatever wasn’t working to make sure the movie moved. He was great at creating options for me, but he also has great intuition, which is all I could have ever asked for. 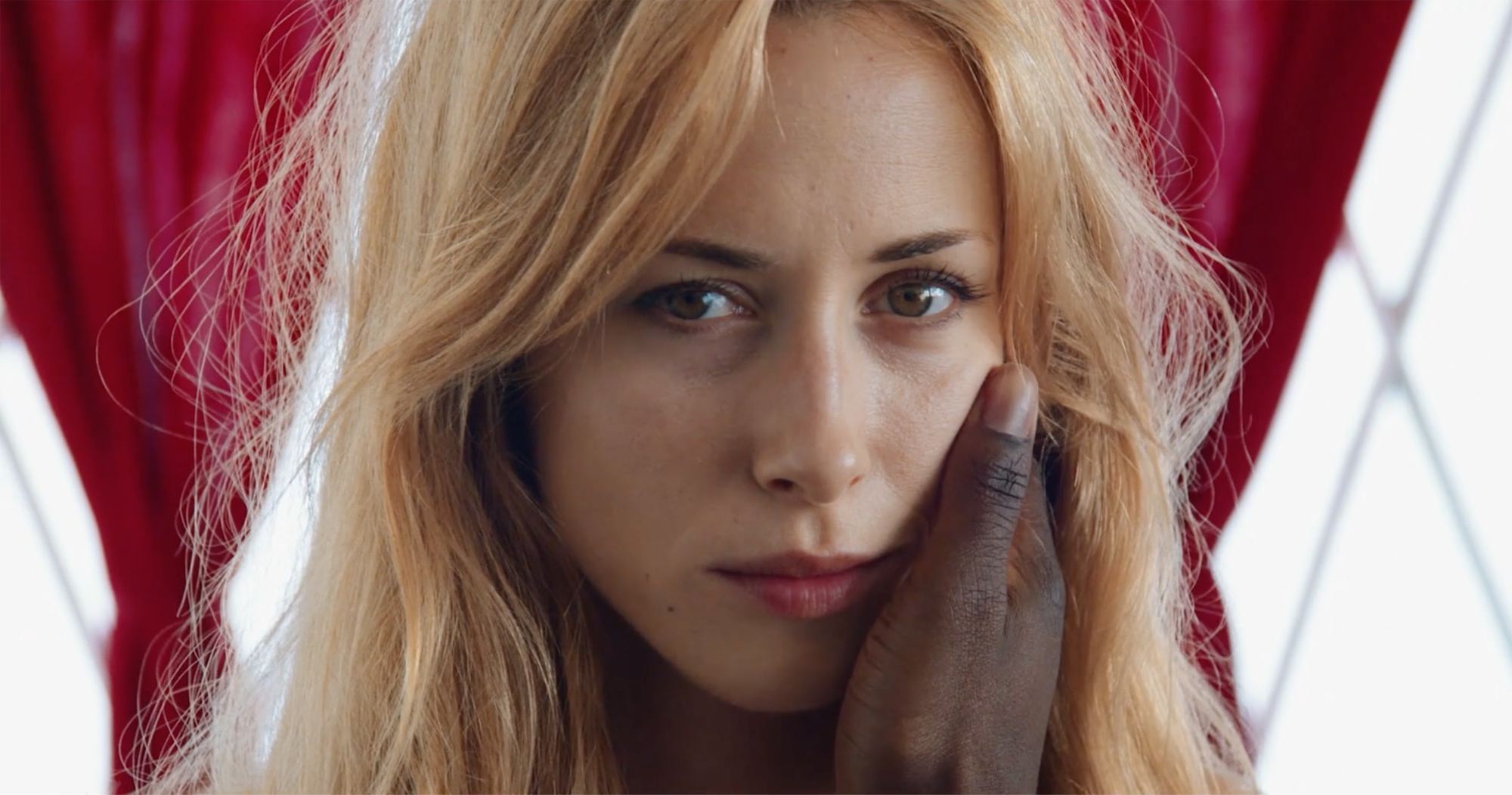 End of Babes was crowdfunded in conjunction with a second short called Polar Blades. When will we get to see that film and how literal should we take the title?

Who knows! End of Babes and taxes and the Amazon payment service fee took all of the money. So, we’ve had to go back to the drawing boards on how to get Polar Blades made. I re-wrote it to a point where it’s essentially a completely different movie but with the same spirit, and we’ve slated to shoot it this spring. It unfortunately does not involve a Polar Bear rollerblading, but it does involve other things that are fun to watch, so I think anyone who was excited about Polar Bears will still enjoy themselves.