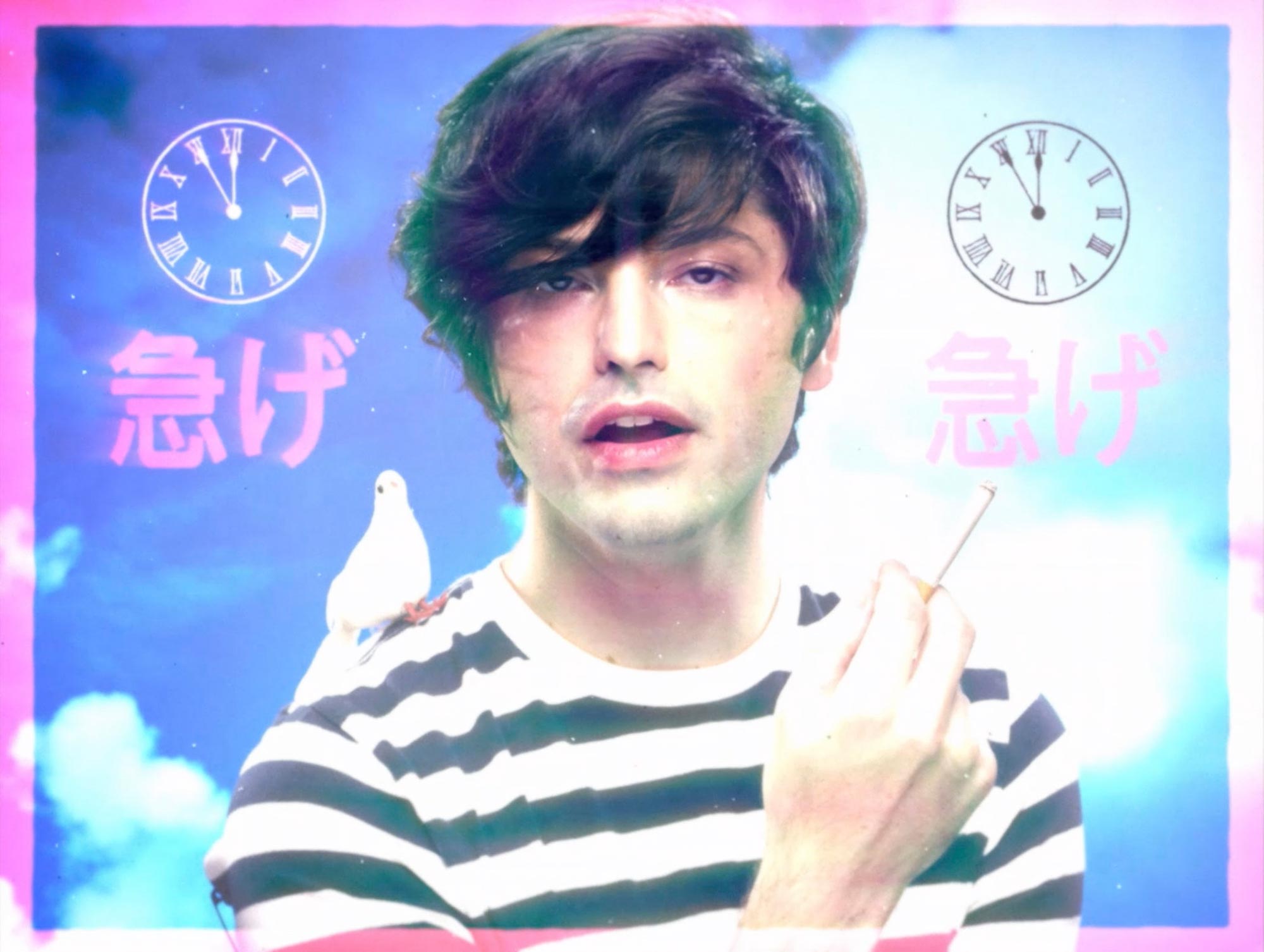 Unfolding during a decidedly strange photo shoot for some mysterious product, Ethan Young’s Amorous In Your Absence music video for synth-pop outfit Ice Choir, sees a romance which defies the laws of physics blossom before the camera. We asked Ethan to tells us about getting creative with rear projection and explain how you too can build your very own, playable guitar clock!

I met Kurt Feldman (Ice Choir) when he began producing/mixing my good friend/roommate Dema’s music. Kurt was finishing up the new Ice Choir record, Designs In Rhythm, at the time and Dema recommended that he reach out to me about collaborating on a video. I had been a fan of the previous Ice Choir record, Afar, but when I heard his new work I was totally blown away. The production/songwriting was so overflowing with clever dynamics, sharp idiosyncratic touches, and humorous energy that my mind immediately raced thinking of all the ways that approach could be translated into a style of visual storytelling.

I worked with Kurt on developing a detailed lookbook/pitch deck and began reaching out to various potential financiers/distributors about helping to produce the video or at least contribute some portion of the budget. But after almost two months of being politely rejected by YouTube channels, media companies, brands, and other potential sponsors, we finally retrenched and figured out a way to self-fund on a much tighter budget without sacrificing the vision. In retrospect, I should have done this from the get-go, but it was a useful learning experience regardless. If the financing interest for your low-budget music video isn’t there at the outset, it’s likely not going to magically appear with a couple emails and a fancy pitch deck. You’re often better suited spending a month jamming out some freelance work and using that to fund your un-compromised ideal video out of pocket. 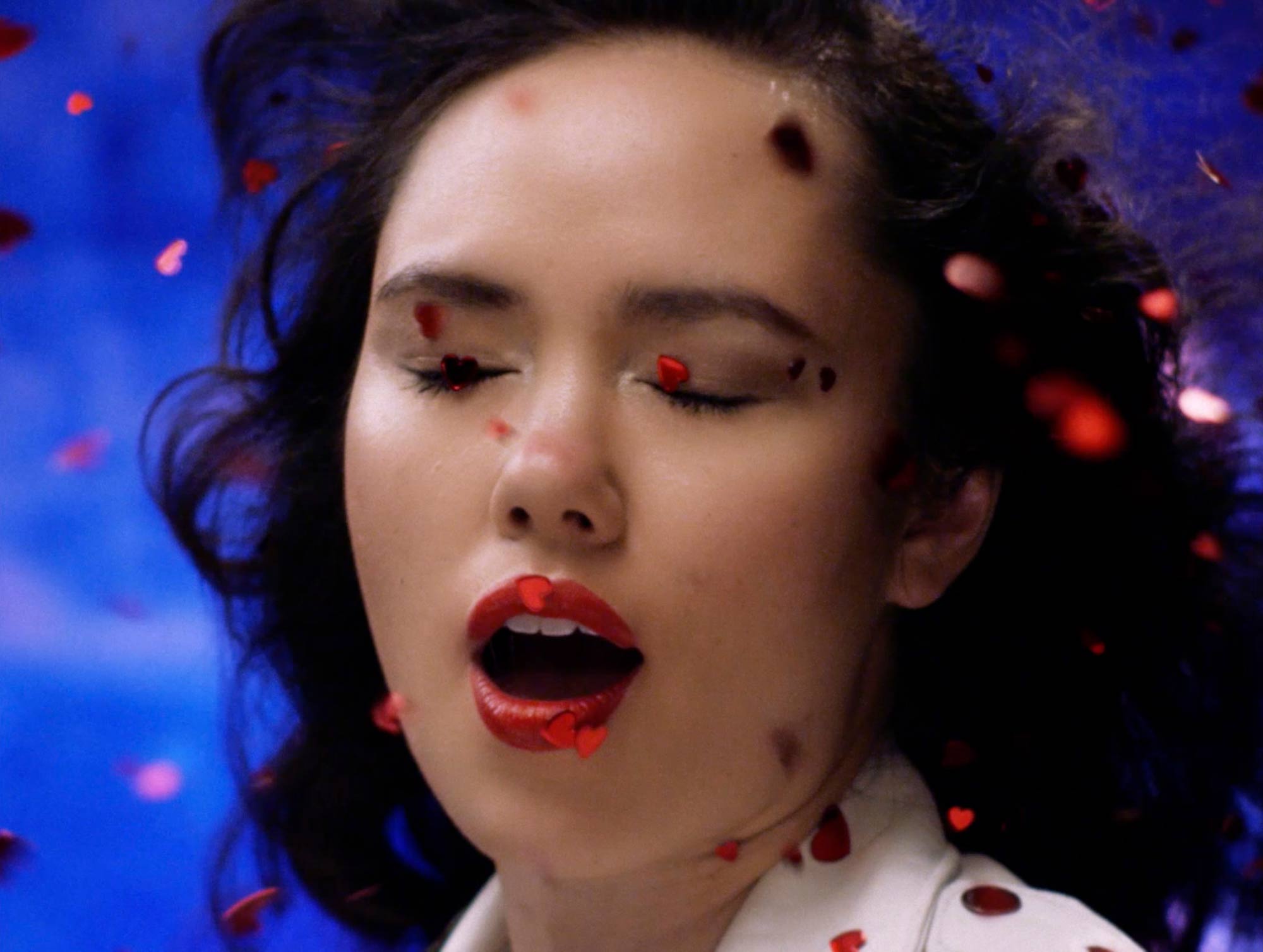 I had never directed a project with this pace of editing and this dense a shotlist, so I decided to pre-visualize the video. This not only helped me to precisely communicate to the crew how I saw each moment unfolding in the edit, but also helped clarify for myself exactly what shots I needed to make this work and what was unnecessary. When you’re strapped for time and working on a tight budget, I can’t recommend this workflow enough. I ended up using a very cheap and very limited pre-vis program called ShotPro that, while it got the job done, resulted in a truly bizarre/hilarious/embarrassing little video. Check it out to compare and contrast with the final product and giggle at my guitar-solo place-holder segment.

We shot the video entirely at Roll Gate Studio Bushwick, Brooklyn. They were super helpful throughout the whole process and even gave us a small discount on the already very affordable rental quote – shout out to Roll Gate Studio! We shot on the RED Epic Dragon camera (6K Full Frame for the most part) and with Century re-housed Cooke Speed Pancho lenses (a combination of S2 and S3 series), no filtration.

From the moment I wrote the treatment, I was set on not using a green screen for the surreal cloud/forest backgrounds. More than half the video took place in these setups and I’ve always found that even good green screen work still looks like green screen work if you linger on it for long enough. There are innumerable optical subtleties to how lenses blur the edge-lines between objects and their backgrounds that I’ve never been able to accurately re-create when compositing footage.

Director Ethan directing and being a pipe

Director Ethan getting ready to axe a light bulb

Jen being a dingus

Kurt with the clock guitar

PA Adam standing in for Kurt

Production Designer Sofia spinning the hands of the clock in style

So I elected to shoot these setups via rear projection. The only problem was that neither I nor my DP (Sam B. Jones – a very accomplished music video director in his own right) had ever shot rear projection footage. I was worried for a number of reasons: the projected image might not be bright enough to match the lighting on our subject, the projection material might not be translucent enough for the image to come through with the proper contrast/saturation levels, the projection material might be TOO translucent and thus flare out the lens and spill a bunch of unwanted backlight on the subject.

Fortunately none of this happened! We used a combination of the Elite Screens ‘WraithVeil’ rear projection screen ($79 on Amazon.com) and the Canon REALiS WUX450 Pro AV 1080p Projector ($80/weekend from Adorama Rental Co.). Both worked like a dream and posed very few issues throughout production. I instantly fell in love with the look of rear projection in combination with high-key lighting. Illuminated backgrounds create an overall look that is much closer to mid-century commercial painting/photography: that total absence of shadows or dynamic lighting ratios, something one usually tries to avoid when establishing a ‘mood’ in film.

I try not to undervalue the completely unsupervised creative freedom my collaborators and I were allowed because we self-financed.

The most challenging part of the shoot might have been the spinning hands on the clock guitar. Kurt and I (90% Kurt) built that thing from scratch using a cheap Squire Stratocaster. We removed the pickups, switched out the Fender bridge for a raised Gibson Les Paul bridge that would allow the strings to clear the face of the clock, filled in the middle of the body with wood filler, shaved it flat with a belt sander, and attached a custom made clock-face decal to the middle of the body. The clock hands were fastened to a nail poking through the center of the body which we then taped to the drill bit of a power-drill. We shot Kurt rocking out a bunch of times in wide/medium shots and then cut in for a couple inserts of the hands spinning. For these inserts Kurt wore the guitar and strummed while I stood right behind him with my arms hugging his body, holding the power drill and very gingerly pulling the trigger. Even the slowest speed on the drill was still WAY too fast, so I had to half-depress the trigger to hit the right speed. Despite this careful approach, the hands got caught in the strings of the guitar and twisted around themselves nearly snapping into pieces. We were able to get JUST enough footage of them spinning freely to sell the idea in the edit before the hands got totally gnarled and broke off the guitar completely. 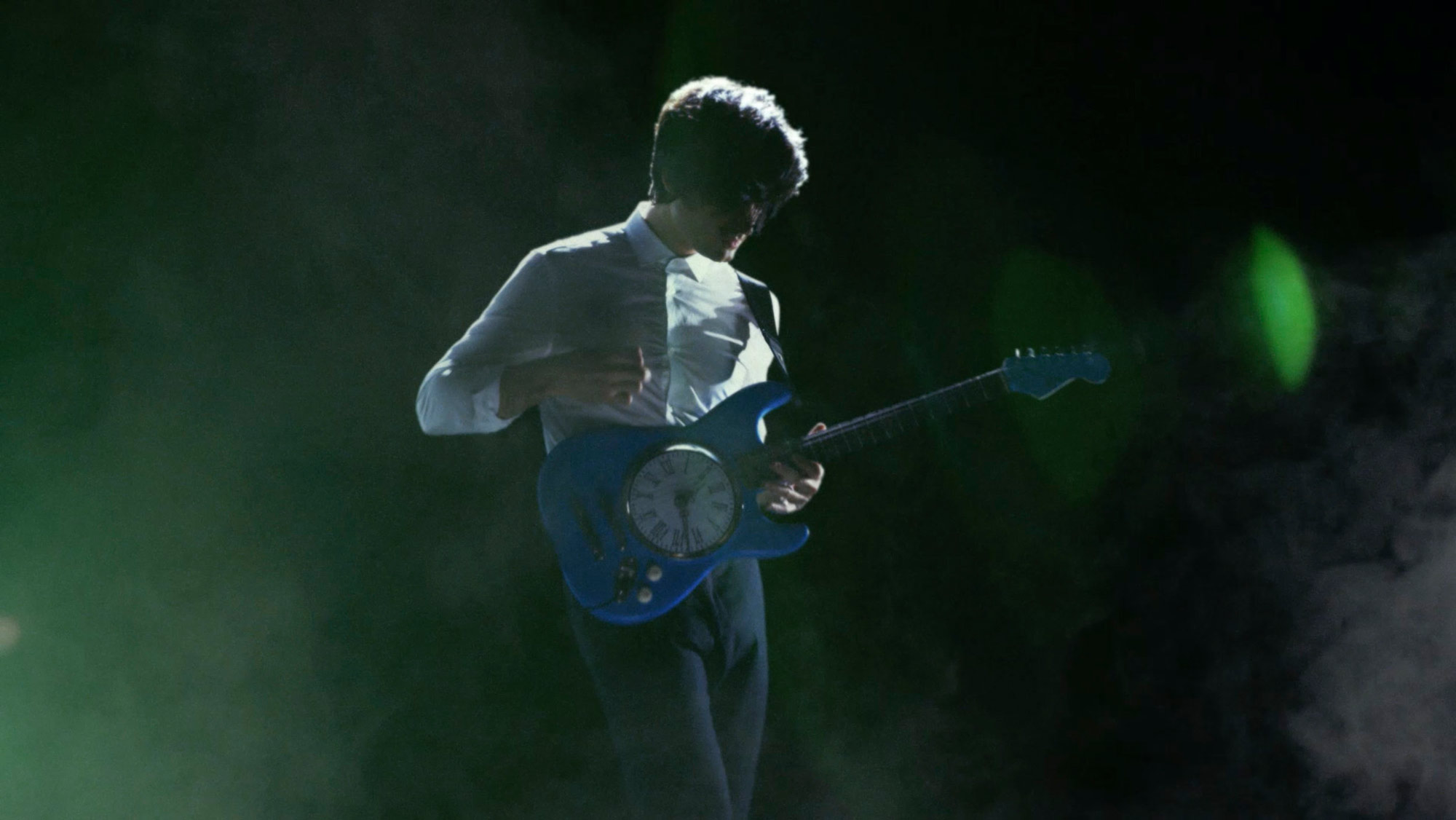 All in all it was a densely packed but pretty contained shoot. We had to move through a ton of material relatively quickly given the size of my shot list and the crew was rarely afforded a break, but the scope of what we were shooting was pretty narrow – almost entirely close-ups and medium shots behind the rear projection screen (or a green screen or black backdrop in a handful of cases). Had the camera been hopping all over the studio and the lighting setups drastically changing shot-to-shot, there’s no way we could have completed this video in two days. As always, I was accompanied by an incredibly generous and talented group of collaborators, mostly friends from college, who were down to dedicate their time and energy for the two days of shooting and in some cases, intermittently throughout weeks of pre-production. I still owe a lot of people a lot of favors!

I had intended the video to be a relatively quick one in post but, as usual, underestimated how much VFX I had written into the treatment. On previous videos, I’ve gotten the edit to near picture lock, or at least a fine cut in Premiere Pro before moving into After Effects. However, given the swift pace of the edit and how precisely responsive I wanted the effects to be with the production of the song, I elected to take a different approach. After cutting an assembly edit in Premiere (literally just matching the actual footage against the pre-visualization), I moved the entire timeline into After Effects and began working through the VFX work right away. 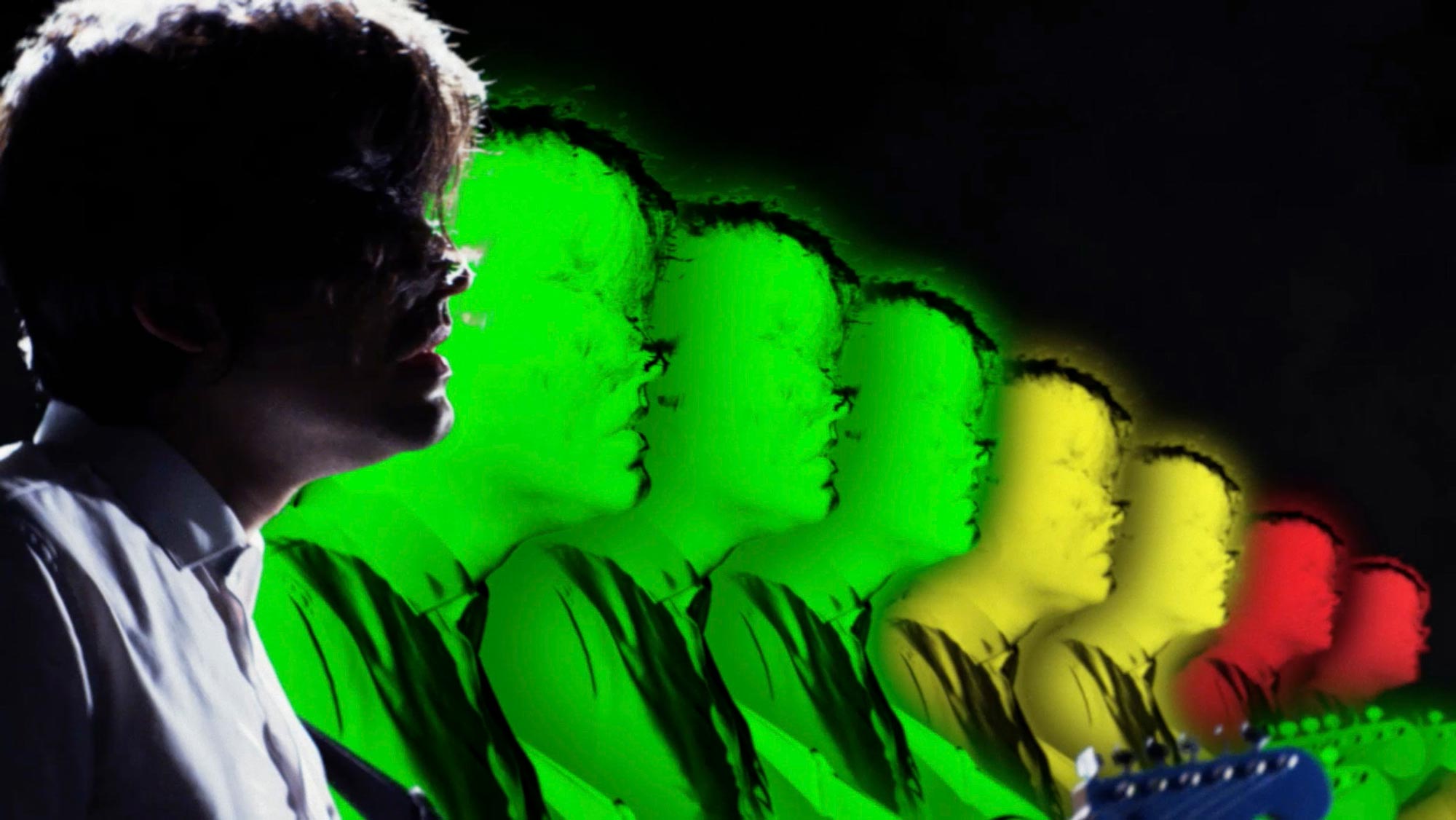 This meant that while I was compositing, programming optical camera moves, adding graphics elements I was simultaneously moving the edit from assembly through to the final cut. As I added more and more VFX elements to the video, the rhythm/pacing/impact of each shot or sequence would inevitably change. Having the ability to constantly shift the edit in response to these changes felt super natural. In a traditional post-environment, where the editor and FX artist are two separate people, this workflow makes no sense, you can’t constantly be tossing the project back and forth between individuals and work stations. But if you’re the sole person taking a project from assembly edit through to color correction it’s so much more straightforward and creatively liberating to do it this way.

The response to the video so far from fans of Ice Choir, my immediate film community, and other filmmakers/musicians who’s work I admire has been really warm and genuinely heartening. And in looking back on the frustrating months spent hunting for external financing, I try not to undervalue the completely unsupervised creative freedom my collaborators and I were allowed because we self-financed. Low budget music videos are produced, consumed and largely forgotten at such a blinding pace these days that unless you’re making something that feels wholly your own, I’m not sure what the effort is worth. The level of humor and joyful energy that Kurt brought to this song and this record gave me a platform to access a part of my taste and creative proclivities that I’ve been dying to put on film for a while now. This video, as ridiculous and overwrought as it may be, is the one that feels most directly reflective of my personality and I think that’s worth something. Right? Maybe? Sure! Let’s go with that!