Sam Jones: The life of a Teenage Filmmaker 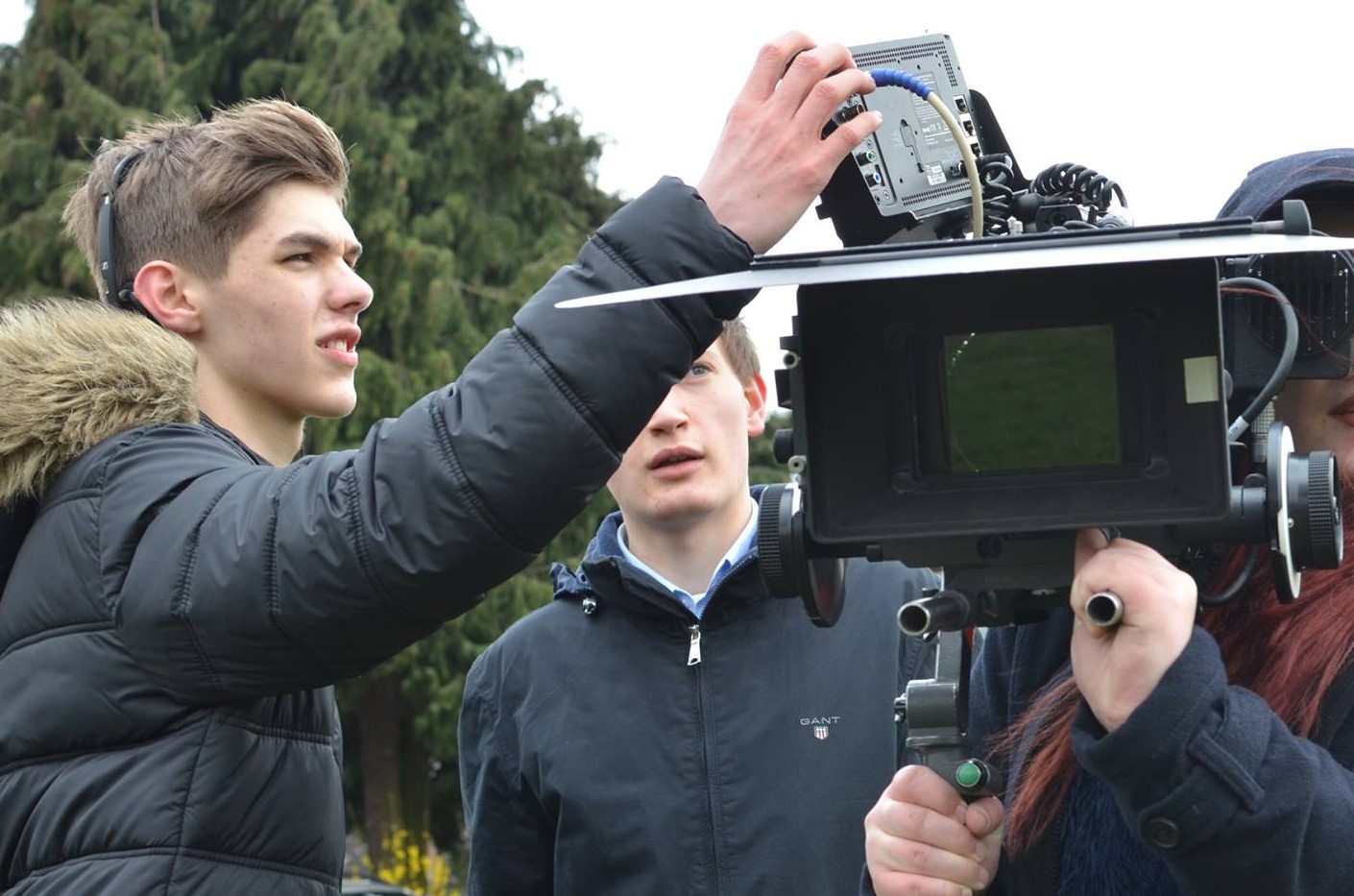 At just 17-years-old, today’s interviewee Sam Jones joins good friend of the site Rob Savage as one of the youngest filmmakers we’ve featured on the Directors Notes. Beginning his journey into filmmaking 7-years ago, we speak to the teenage director about influences, motivation, BFI-funding and his recently released short Lifeline.

How did you get into filmmaking and what can you tell us about your path into directing?

My first experience filmmaking came about aged 10, I found an old laptop at the back of the cupboard. The laptop had a built in webcam which I began to shoot with. I shot short action scenes with friends which will never see the light of day (ever), but we were young and nobody was watching. I think that was the beauty of it. Over time, we naturally got bored of creating simple scenes and moved across into more developed stories. I think that’s quite a natural progression to make really, trying to create more reason to keep audiences intrigued and watching.

A film a day became a film every weekend, which became a film a month, etc. We began writing scripts for the stories. I was lucky enough to walk to school with the friends I made films with, essentially meaning twice daily production meetings to get excited about ideas. We all helped each other improve at how to tell stories, constantly talking about what worked and what didn’t. I always seemed to be the one who held the camera, and gradually became more and more interested in what directing is.

I decided to submit a film I did with a couple of friends (o2) into the British Film Institute (BFI) Future Film Festival, a festival for under 25s. The film had a £10 budget and it was the first time I’d ever entered a film into anything. To my amazement, the film got the Best Fiction Film award at the festival which was just astonishing. From there, the BFI gave me the ‘raw’ award, given annually to the filmmaker who they believe to have the most potential as a filmmaker. The prize was £5000 to make a short which was unbelievable. Having only ever directed films with friends, it was time to start getting a real grasp on directing. I wrote and directed a film called Lifeline, which is now online.

When I was your age I found it a struggle to get out of bed in the morning to make a college class, what’s your inspiration and motivation?

I’m sure there are a few out there that struggle to make it out of bed in the morning, but it also should be said right from the start that there are loads and loads of young people doing amazing things out there! So I suppose it’s these people, those around me, that really push me on.

Seeing what’s possible from my friends and others around me is a real motivator for sure. I wouldn’t say I really have a focused source of inspiration. I find that lots of filmmakers are very inspired by films but for me, it’s often not really where I find myself getting compelled to get out and make a film.

I think it must be the best job in the world.

For me, inspiration can be anywhere, but I find it a lot from music, theatre, stories and places. I listen to music a lot and I try and keep discovering new artists as much as possible. I try and go to the theatre about once a week, as I volunteer at a local theatre so get free tickets. I think the way theatre tells stories is so broad, and it can be hard to find ways to see indie films which experiment more with storytelling, so I find that theatre really broadens how I might think about approaching a story. Audiences in theatre are much more willing to suspend disbelief giving full freedom to the theatre makers.

I try and implement these into film to see how an audience reacts. For example, in my next film, there’s a moment where a nightclub bleeds into a bathroom, with lights, music and people all there, dancing in the bathroom. Mostly though, the motivation behind actually making films is how enjoyable I think it is. Every stage in the process is such good fun, and whilst it can be so scary at times, every moment is such a thrill, right the way up to sharing the film with an audience. I think it must be the best job in the world.

Lifeline is a story I’ve had in my head for a while. It came about after a conversation I had with my mum. We were talking about what she’d do to save me and came to the response: anything. This brought me onto thinking about what the situation might look like if everyone had to do something horrific, but were fueled by love. So everyone is forced to do something perhaps opposite to love, i.e. kill – but it’s for those they love. Suddenly, the stakes are raised so high, as everyone has their loved one at home.

It’s a film which looks at the ultimate selflessness and in doing this, celebrates what humans are capable of.

So I suppose the film looks at what people are capable of doing for those they love. However, I wanted it to go beyond this a bit, with the ending exploring what someone will do for someone else who they don’t love. It’s a film which looks at the ultimate selflessness and in doing this, celebrates what humans are capable of.

The film was BFI funded – what kind of support did you get throughout production?

The main support the BFI gave came through the respect the BFI has in the industry. Suddenly, the use of the name BFI allowed us to open doors which we’d never normally think to be able to approach. It allowed us to approach actors who I really respect, as well as gain a fantastic crew. I was a bit cautious to really push the BFI name out there at first as I didn’t feel I could carry the weight of quality which the BFI does, but the producer (Catherine McNamara) really pushed it out there, and it helped a lot. It grew to something which I never thought it could. I did insist however that the crew were all students. I felt like it was important that everyone working on the film really wanted to work on it. It’s something I make sure is the case for every project, including actors.

The BFI also helped organize a fight choreography workshop for us which was a fantastic help for the shoot on the day. It gave us the chance to block out all the movement sections safely, especially when it came to working with Matilda (the young girl in the film). This was also great as an exercise for getting to know each other meaning we could hit the ground running with rehearsals on the day of the shoot. Since having this, I’ve always said that I insist on having at least a day for rehearsals with the cast so that we can get to know each other and the characters. It almost always shows on screen if not I think, especially for relationship driven drama.

I think the most important piece of advice I received came a while back from Destiny Ekaragha, a film director (Gone Too Far!) She said that filmmakers (and creatives in general) should always have a few projects on the go, even if it’s a film you’re shooting on a webcam with a couple of friends. She said that this constantly keeps you actively practicing your craft which is so important to keep on improving. And then don’t feel compelled to share the film out there at all. If you don’t think it’s any good, keep it hidden away, reflect on it, learn from it, and move on. Of course, this can be more difficult for some larger projects, but staying active was her take home message.

I really don’t feel qualified enough at all to be giving out advice, but there’s one thing which I find myself telling people a bit. Of course, filmmaking can cost lots of money but story will always remain absolutely 100% free. You don’t need a big budget to tell a good story. Spend time crafting your story, get it to where you really want it to be. I often think that if a story is good enough, audiences will come. And If you practice storytelling just like an athlete would practice their race, and a musician would practice their instrument, you can soon improve and find your audience.

I’ve got another short in post-production at the moment. It’s a gritty drama set in the grungy out-of-order toilets round the back of a nightclub. David wants more drugs to help him escape the real world. The drugs, the lights, the music – they all make escaping so easy. But when his drug dealer Creecher doesn’t let him have any more, David learns the consequences of escaping. It’s a film about David who wants to escape reality but really needs to embrace it, like many young people. The film will be released soon!

I’m also directing theatre nowadays, and have directed a full length play. Theatre directing has taught me so much about constructing stories, particularly through working with actors. We had over 70 hours of rehearsal time, so suddenly there was loads of room to explore. Working with actors is part of what I enjoy most about film. But mostly, theatre directing has taught me how to craft a longer form story, starting to recognize how precise changes have to be to shape the story. I’m also working on a short documentary and a dance film, which is new! I’ve got another short film written which I’m trying to push into pre-production now.

2 Responses to Sam Jones: The life of a Teenage Filmmaker