Forming as a production company diametrically opposed to the sterile approach to filmmaking witnessed in their peers, film collective I AM HERE seek out visceral projects of the here and now which encompass the complicated textures of the world as they find it. This fundamental approach is abundantly clear in their narrative music video WALLS – a short film dealing with the energy generated through human confrontations with walls be those borders physical or mental. In the following interview, Maik Schuster explains how the determination of he and fellow I AM HERE compatriots Fatmir Dolci and Max Paschke to depict the opposing forces of walls in our lives, led to the trio setting fire to a car against The Israeli West Bank barrier.

What galvanised the forming of the I AM HERE filmmaker collective?

We met each other during our studies at film school. We all had common ideas about the films we wanted to make and so we thought “Alright let’s team up and do something different.” We were young and didn’t know much about filmmaking but somehow we got deterred by the scenery we often saw at university: 10 – 20 people hiding in the studio without sunlight for a few weeks to make a film nobody would ever get to see. So we focused on a rawer, more urban approach of making films and video clips. It has to be real and it has to reflect and deal with today’s street culture – no shiny stuff that seems fake.

Was there a particular event which lead the concept for WALLS?

The initial trigger to realize WALLS was my travels to Palestine in 2015. I spent 4 weeks in the West Bank to visit a friend volunteering at a skate camp in Bethlehem and shooting a production for German TV. During these 4 weeks the mere existence of the wall deeply impressed me and I started to think about walls in general as they give shelter in everyday life and divide people worldwide at the same time. I got the homies Fatmir Dolci and Max Paschke on board and we decided to make a film showing three individuals struggling under that tension. And that’s how WALLS came to life. 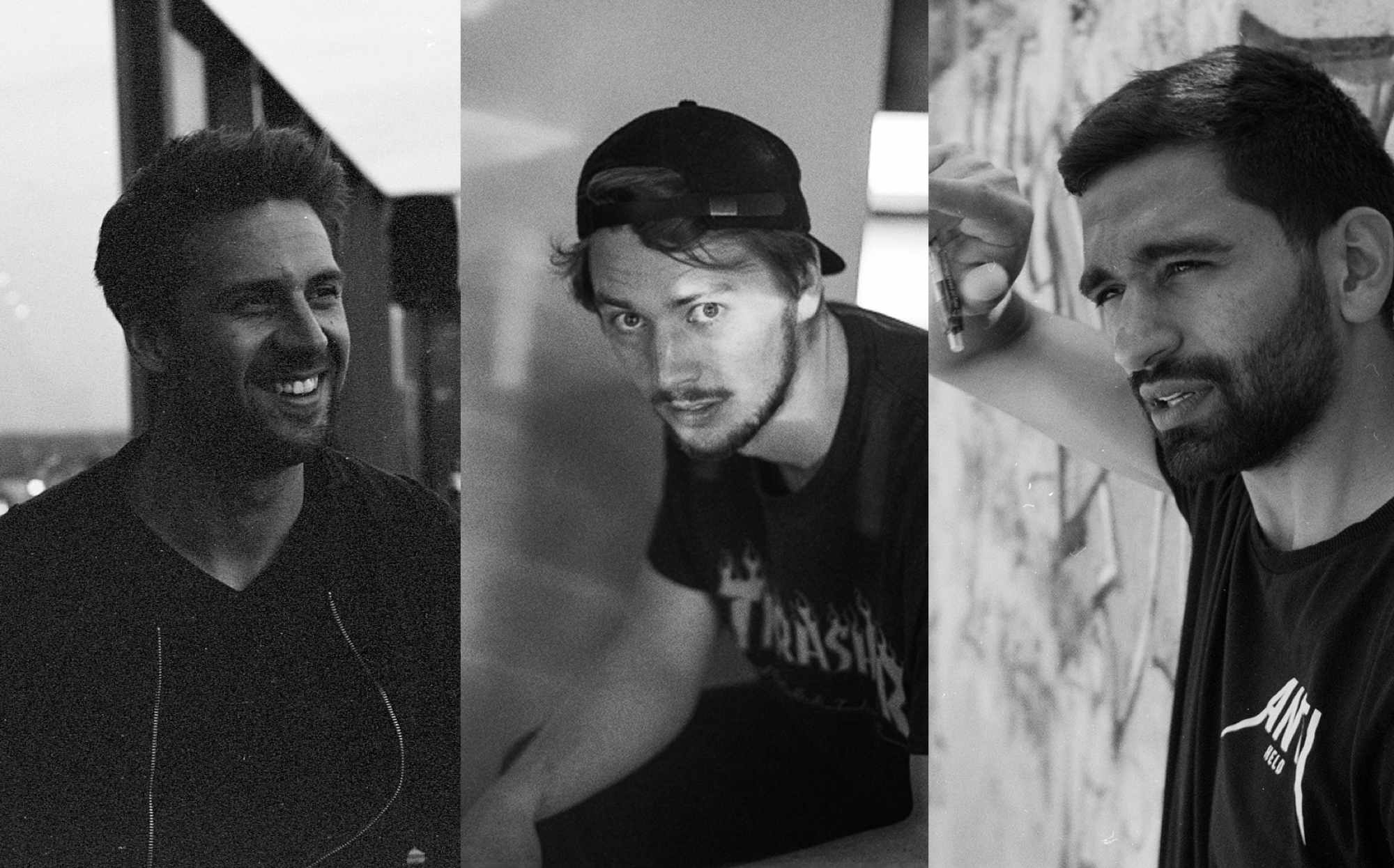 With the three of you responsible for the film’s creation how were duties split across the different stages of production?

During the whole process all three of us have been equally involved when it comes to conception, production and so on. We also had a pretty common idea about how the film should be and so we set up a script-like guideline. We always had to deal with unpredictable circumstances while shooting but having the guideline helped us making decisions really quickly when needed. Having three directors with the same state of mind definitely helped to make the most out of every scene. We basically worked like a single person having three brains. For the shoot however it was also clear that everyone had his department he was responsible for. This allowed a really productive work flow on set. All in all, it was the perfect mix of democratic collaboration and independent work and expression.

Given the locations did you face any dangers or difficulties during the shoot?

Well, there have been many dangers of different types. Most of the time we only had a brief idea about how things might be going down so we thought about plan B and C before even knowing if A would work or not. For example, when we flew out to Palestine basically all we knew was we’d meet Aram R Sabbah in Ramallah. And we knew that getting in and out of Israel with camera equipment and our footage would be a challenge, too.

Just a few hundred meters from the location we got in a military road block with soldiers pointing machine guns at us.

We didn’t know if we’d find the right locations, we didn’t know if we’d find a car to burn and so on. Our time in the West Bank was quite limited and we needed to postpone shooting again and again. Our fault was that we travelled at the end of Ramadan and it was boiling hot outside. So it was really hard to get people motivated to help out when they: a) didn’t eat and drink all day, b) would spend most of the day inside and c) had family obligations the whole day.

The last day before our departure we finally got the confirmation for a car a few hours before we needed to shoot and so everything was super hectic. We focused on using every second in the most efficient way. The whole shoot was madness. 30 – 40 people from the local village watched the scenery, the local fire department was there, military helicopters were crossing over our heads every few minutes. The pressure was really high but somehow we wrapped it up. Luckily we hid all the camera mags when we drove off – just a few hundred meters from the location we got in a military road block with soldiers pointing machine guns at us. After they examined our car and yelled at us the whole time we finally got out of the situation without any harm or loss. It felt like a miracle.

Your actors were required to convey their individual struggles solely through expression and action. How did you cast and then shape those performances?

Our aim was to shoot with people that didn’t have to slip into a role. We wanted to work with people that basically were the characters we imagined. Authenticity was key. For the Croatian part for example, we arranged a casting with a local soccer team on location just few days before shooting because we knew we’d find the perfect cast there. They were all hyped about it and when we described the character’s despair and hopes to Lovre, our chosen cast, he said: “That’s just me.” The whole cast consists of amateurs and we’ve been blown away by their passion and capabilities. Every scene just seemed to flow naturally.

There’s a real feeling of intimate immediacy provided by the film’s roving cinematography which makes these stories even more compelling.

The cinematography style developed through various factors as were improvisation on set, limitation in transport and a documentary approach. Some shots where planned and based on our guideline, others just evolved while shooting – we shot on Sony FS7 and Sony A7sII + Zeiss High Speed PL Lenses. You can imagine it like a chain with a few set links and the others filling up bit by bit. All in all we worked with three types of camera moves: The major parts are handheld camera shots and we added stabilized gimbal and tripod shots. Mixing up all of those generated special dynamics pushing the inner conflicts and creating a contrast between action and silence. Shooting with a small setup and mostly available light we had the flexibility to react to every situation and capture natural moments you could never stage. The camera movement is a really powerful tool to let the viewer dive into the character’s world.

Likewise, the tri-voiced narration is extremely powerful. At what stage was it written?

The narration was written after shooting at a point where the edit just didn’t seem to work as planned. We knew from the beginning we didn’t want to work with narration on screen but in post we found out that there was still a piece of the puzzle missing. A common virtue that united the three stories and that eased access for the viewer on a different level. And so we came up with the voice-over. There was no particular source of inspiration – we simply searched for words that reflected the character’s thoughts on an emotional and pure level. I [Maik] wrote the lines with an abstract and poetic approach, Fatmir recorded some test dummies – and we felt it was the missing piece.

You tease the upcoming sections into the proceeding narratives which makes for a very intriguing structure. How quickly did you find the film’s shape and narrative progression in post? What determined the order of the characters?

The post-production needed its time to develop. It was some trial and error and eventually we merged all sections with abstract inserts to raise tension and to show that all world’s are connected somehow. The order of the first sections came out naturally. We liked the switch between day and night time and it was important for us to reveal the film’s topic step by step. If we had started with the Palestinian section the film would have gotten the wrong harsh and political touch from the beginning.

Sound design and Phazz’s music both add tangible weight to the images. Could you tells us a bit more about these auditory choices?

We discovered Phazz through YouTube or Soundcloud I guess and hit him up with a mood trailer straight away. He was fascinated and down to work on the bigger project immediately. The sound design was always planned to be a key element. We wanted it to be not only a music video with images compiled to a song – we wanted it to go deeper and Philip did an amazing job on the sound design. The combination of imagery, music and sound design helped us to push the film’s impact to a new level and these elements are all equivalently valuable for the film. A film without great sound ain’t no film.

Where is I AM HERE heading next?

Well, we’re ready to head wherever! The feedback for WALLS has been overwhelming so far and that really pushes us. People from Germany, Palestine, Croatia, France, Ghana and Israel joined forces across borders and helped to create this piece. Definitely a unique experience on so many levels and memories that will last forever. We’ll try to keep the good vibes and make I AM HERE grow constantly. We’re excited for upcoming productions and collaborations and there are still so many stories to tell and places to travel. I AM HERE is a production for sure but it’s also a movement. So brands, labels and agencies out there – let’s get moving together! #iamherecollective