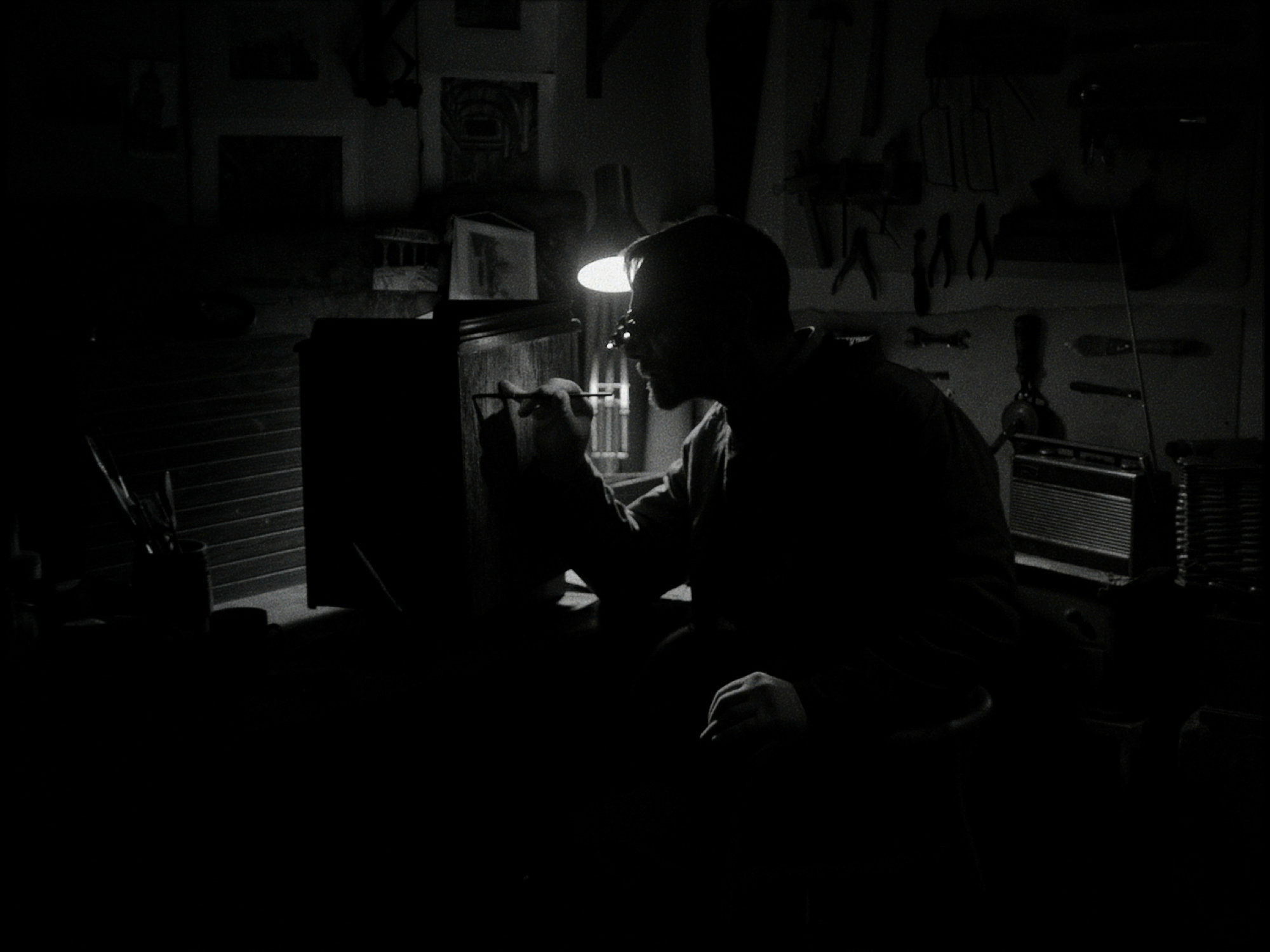 Taken from Mark Pritchard’s 2016 album Under The Sun and featuring the talents of Bibio, haunting track Give It Your Choir has been perfectly coupled with foreboding, black and white visuals from Dutch Director Emmanuel Adjei. Alluding to a near future which sees humanity crammed together like so many forgotten belongings into anonymous storage facilities, Give It Your Choir reflects the growing unease that our modern world is heading off a precipice. Emmanuel reveals the conception, meticulous planning and subtle post production work that went into this audacious single-take music video.

Where did this dark concept of near future living come from?

The concept for Give It Your Choir came from the track as we felt like it was chanting a cry for help in a modern world losing its humanity. Together with Writer Marleen Özgür who I always work with, I developed a concept that showed a not too distant reality where storage containers function as personal homes, and materialism seems to have become the new religion. This, in turn, is a neo-industrial church where goods are being idolized; containers have turned into personal temples, and above all, the only spaces humans have left.

The dystopian world that we’ve tried to depict is really a not too distant one.

During the process I had a lot of conversations with artists Mark Pritchard and Bibio, EPs of COMPULSORY Chris Toumazou and Kadri Mahmoud and DP Paul Ozgur about the meaning of the lyrics and the symbolic layers that lie in the musical construction of the track. As a similar parallel to cities all over the world enduring mass overpopulation and rising house prices, by wrapping our materialism in ribbons, carving tombs for our memories, we fill our fights with fumes, cry for our losses, and give our greed a choir.

How did you determine the populous of this dystopian world? Do the characters and factions directly correlate to individuals and interest groups in our reality?

The characters in this video are references to archetypes of today’s social climate. The storage hunters (the men and women that invade the spaces) were mainly inspired by real life characters from the TV show Storage Wars, whereas the characters of the storage owners were based on what industry experts refer to as the motivators of renting a storage space: the ‘4 D’s of life’: death, divorce, downsizing and dislocation. 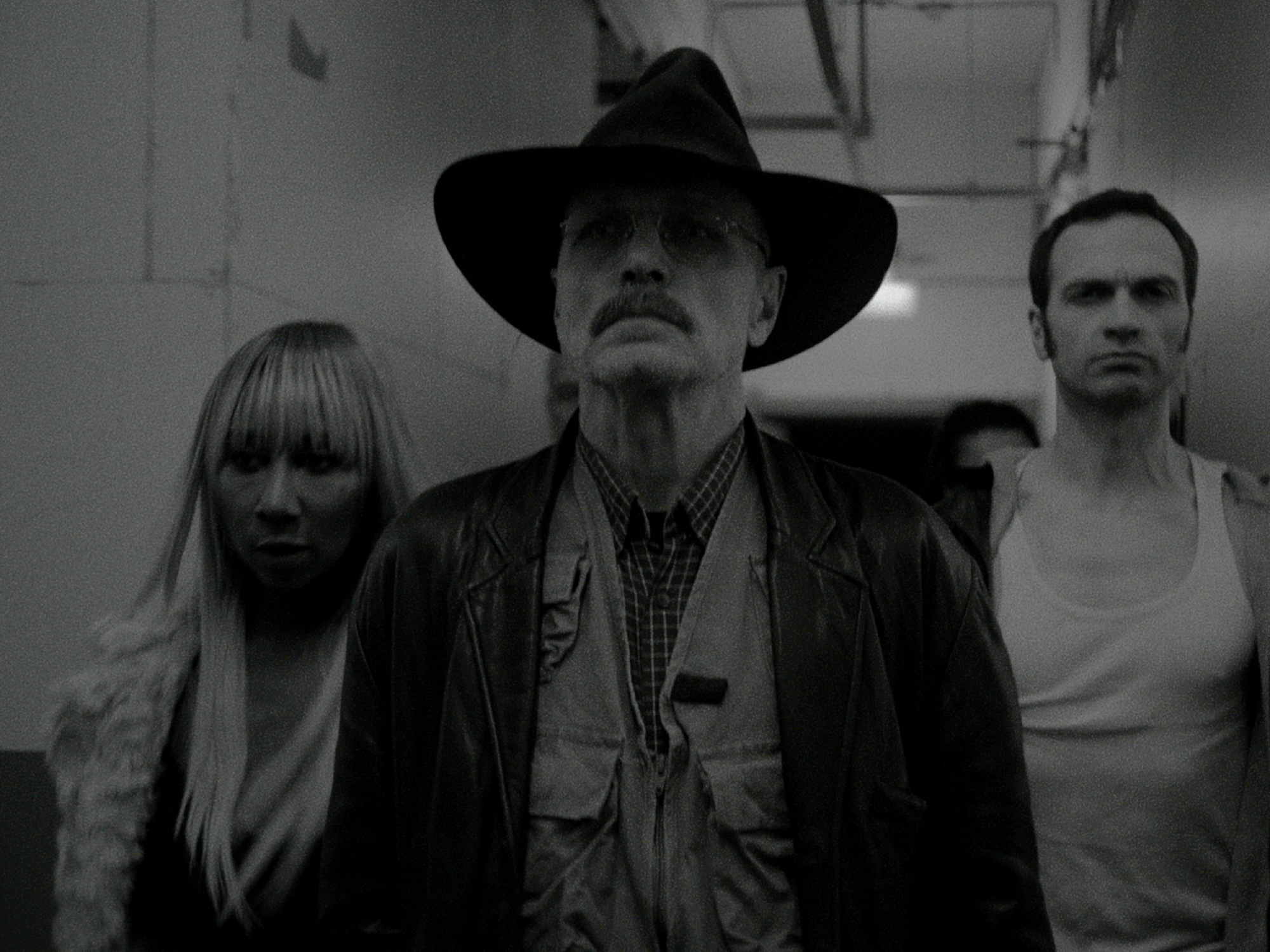 As major cities run short of living space, self-storage boxes are now becoming a relevant service in many parts of the world. Catering to our human desire to gather and collect. The UK alone has an estimated 975 facilities that store household goods. The dystopian world that we’ve tried to depict is really a not too distant one, and the characters in it, therefore, could in fact be anyone.

In what ways did the claustrophobic, warrenlike structure of the location, in turn, influence the production design and form of the film?

We were really lucky to find this amazing location in South West London (an actual storage facility) a couple of weeks prior to the shoot. We were allowed to rent an entire floor for a month, which meant that we had a lot of time to develop the script further whilst slowly building up the set to its final form. I tried to be there as much as possible so that I, together with Art Directors Paulina Rzeszowska and Madeleine Spencer, could grasp the essence of every space and every character within it.

It was only after some time, just having been there, feeling the vibe of the place, that we realized that the video needed to be shot black and white. And this, in turn, influenced the production design again. Besides that, the location certainly influenced the content and order of the scenes, which we had fully prepared before the actual shooting day. We needed to do this so thoroughly because we were going for a one-take that demanded a 360 degree dressed set.

What prep did you put in with the cast and crew to pull off the impressive, roving one-take choreography?

Prior to the shoot we had a full day of rehearsals with our main cast members. This was extremely helpful because we could actually see the scenes come to life and every department could take the time to react. The good thing about a one-take is that you don’t have to deal with a lot of cuts in post, so it’s quite cool to see the video already working on set. Together with my amazing DP Paul Ozgur, whom I’ve worked with on almost everything, the Steadicam operator Doug Walshe and the first AD we mapped out the choreography so that on the day of the shoot everybody was in sync. 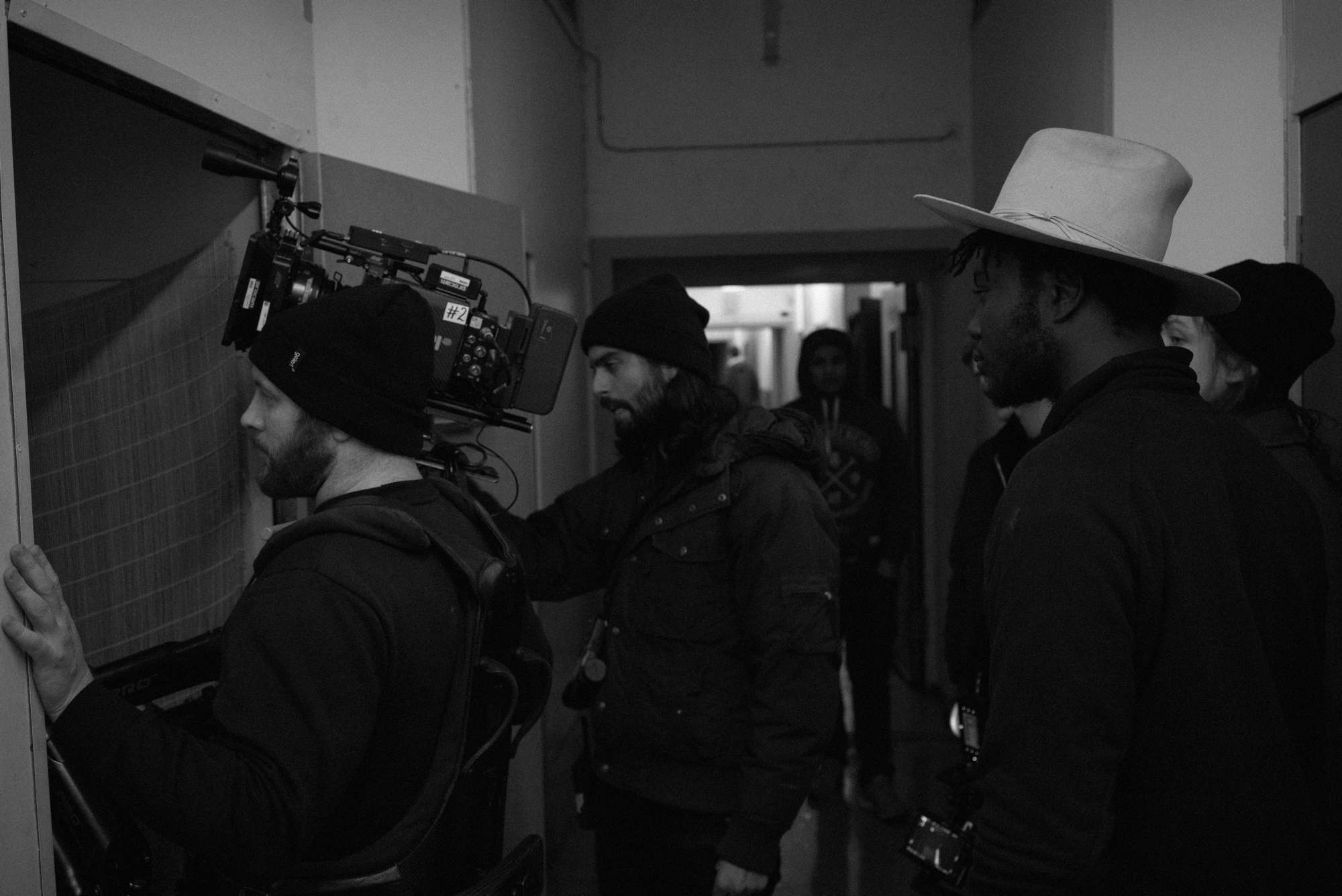 During the shoot, Doug and Paul tried to keep the pacing of the shots as consistent as possible by listening to the beats and lyrics of the track while shooting. In every take, every single person on set was extremely motivated to turn this take into the best one. In total it took the whole crew and cast 16 takes to get to the take that we felt was right for the video.

Given the 360 degree world view of the camera throughout the location how did you light and what did you shoot on?

We used an Arri Alexa on a Steadicam with a vintage Cooke S2 32mm lens. Our concept was to start with a more brighter feel and end with a darker mood. Because we were going for a long take, we were forced to light it as one scene as we couldn’t change or do any lighting cue’s throughout the long take. The DP together with our gaffer looked closely at the rehearsals and per scene/camera movement lit it individually. 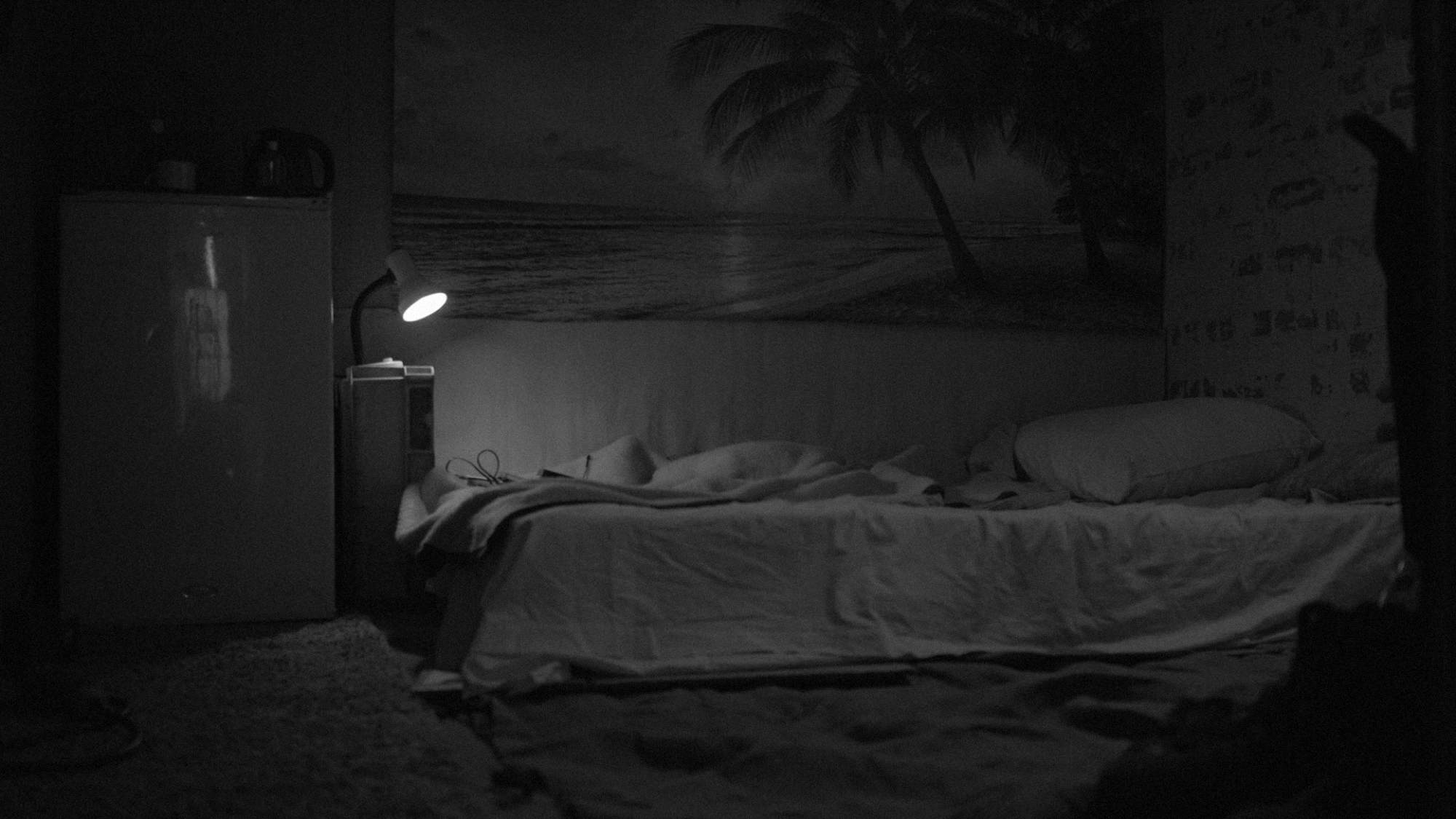 We used mainly practicals such as a fridge light, a desk lamp or an old television, giving the rooms either a domestic or industrial atmosphere. For the long corridor the DP did a great job in combining different light sources existing overhead fluorescent lights, vintage bulbs and Kino’s, mostly lit from above. It gave the faces and actions of the characters more texture while they were moving around. The transitions between the scenes also played a huge role in creating a dynamic choreography of constantly changing styles of lighting.

What additional steps were needed in post production to fully realise the tone and aesthetics of Give It Your Choir?

The final edit consists of only three hidden cuts, which meant that Editor Leila Sarraf (Trim Editing) and I had to deal with a lot of pacing changes. Many times we had to slow down or speed up a particular scene (up to a single frame) just because it needed to match the lyrics of the track. Our main take was almost four minutes long so every little change we made had its effect on the rest of the take.

This project was all about showing and not telling.

With the grade done by Colorist Jim Bracher (The Mill) we were able to manipulate the storyline once more. This project was all about showing and not telling, so with the grade we could consciously hide and reveal faces, movements and details. Our visual references were mostly black and white German and American portrait photography (August Sander, Diane Arbus) and Eastern European expressionist cinema (Andrei Tarkovsky, Béla Tarr).

Finally, our VFX team at The Mill also did an amazing job on the final scene, creating a realistic and sinister view from the window. Integrating what was shot in camera, we focussed on directing the gaze of the viewer by subtle movements in a fixed shot, i.e. fog passing, a crane in the background. We had a lot of conversations about how we could achieve a certain look that fit the concept and the rest of the video. In the end, the final image became a beautiful transition from a view of a dark and ambiguous interior to a view of a clearly dystopian exterior.

Do you have any future projects in the works?

Currently, I’m working on a few projects and another new video with artist Sevdaliza. As for film projects, Writer Marleen Özgür and I started writing a script for a short film and hopefully somewhere next year we can work towards a feature film.

All behind the scenes pictures used throughout this article were taken by Andi Beqiri.