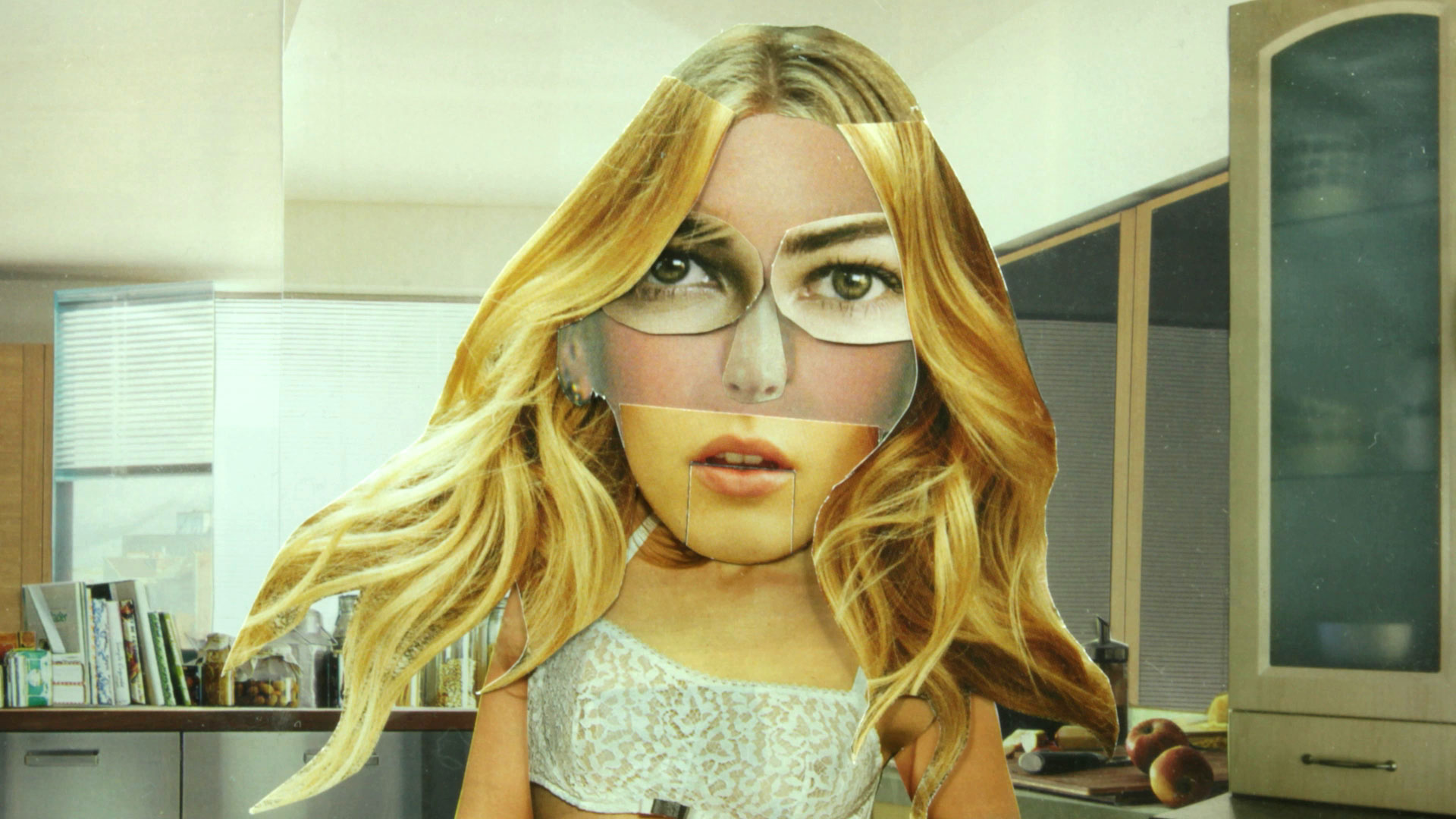 Created from cuttings from National Geographic and French gossip magazines, Joseph Wallace’s Natural Disaster is a surprisingly British film that follows its hapless protagonist through one of the worst days of his life. Built around the vocal talents of its cast, this semi-autobiographical 5-minute short film is somewhat of a side-step from Wallace’s usual puppet-based approach to animation (see previous DN features The Man Who Was Afraid of Falling and Dear John for examples of his previous work), but it’s a style that feels perfectly suited to his story.

Eager to find out more about why Wallace opted for the cut-out animation style with this story and how his theatre experience helped when working with actors, the writer/director joins us to discuss his latest film, and talk about upcoming projects:

Can you sum up your narrative for our audience and explain what it was about this story that you wanted to capture on screen?

Natural Disaster follows a man whose life falls apart over the course of 24 hours. It’s a series of domestic tragedies that build to an emotional crescendo for the character. It’s essentially a film about the surreal nature of losing someone you love and how your grip on reality can loosen in that situation. Most of my previous films have been metaphorical, visual pieces that operate on a more poetic level, often where music takes the place of dialogue. This film, in contrast, is probably the most real-world and naturalistic film I’ve made and deals with relationships and emotions in a more direct way. I’d actually written the idea a long time before I made the film and had the impulse for the feel of the piece and the beginnings of the story. It’s fairly autobiographical to a point but then exaggerated and dramatised to create something that works on filmic terms.

With this “fairly autobiographical” slant to your narrative, what is it that you hope an audience takes from a viewing of Natural Disaster?

Hopefully there’s something in the universality of loss that everyone can relate to. I think it’s about considering these very personal moments of vulnerability within the context of the wider world. The film treads the knife-edge between comedy and tragedy and I’m always interested at screenings how audiences react to different moments, I think it probably depends on how people personally relate to the subject matter but it teeters on the edge between mundanity and the surreal.

What made you opt for the ‘cut-out’ animation style for this narrative?

I’ve used cut-out animation in the past and I have to admit, often in the first instance, I’ve chosen it because as a technique it is relatively quick! Or at least quicker than making puppets and sets and dealing with three dimensionality. As with much independent filmmaking alongside commercial work, I was making the film with limited resources on a limited time frame. Cut out animation is quite immediate as a process through cutting and pasting and collaging and moving things around under the camera without having to concern yourself with gravity. But in fact once you get into the details you end up being incredibly meticulous, as with most stop motion, and I soon found myself animating these tiny pieces of paper with tweezers.

In the South of France I gathered together all these National Geographics and French gossip magazines and had to piece together places and people that looked vaguely ‘English’.

Interestingly, working in this collaged way, I couldn’t really design the film as I might have normally, it was really about having personalities in mind and then finding the appropriate features that might work for them. The irony with this film was that a lot of my previous shorts had a heightened European aesthetic and this film was very much set in the real world in some unidentified English city, but I made the film when I was living in France, working as part of a group of filmmakers that I co-founded called Caravel Collective. So in the South of France I gathered together all these National Geographics and French gossip magazines and had to piece together places and people that looked vaguely ‘English’ to have some sense of authenticity. That’s why all the food in the supermarket scene is French.

Often one of the most overlooked (or under-discussed) parts of production in animation are the vocal performances, how did you go about working with the actors when making Natural Disaster?

Through my theatre work there were a lot of brilliant actors I wanted to collaborate with and Natural Disaster was really built around the vocal performances of Adam Peck, Victoria Curtain and Tom England. I was really interested in the potential for an audience to care about a character who’s going through genuine emotions if that character is literally just bits of magazines cut up in a wonky assemblage. I think that’s the magic of animation really, that you can imbue empathy in what are essentially discarded materials.

It’s actually all iPhone recordings for the voices, all recorded completely separately and then timed out as if they were in the same room.

I wanted the actors to play the characters in a very deadpan and naturalistic manner and have that contrast the look of the characters which is quite simple and inarticulate. For me there’s something inherently funny about them for that reason because they have ventriloquist dummy mouths and can’t be over-expressive, they’re just straight-on and fairly archetypal.

The challenge was recording the actors’ voices, with everyone being in the UK and me in France. I ended up Skyping the actors to give direction and they simultaneously recorded their lines on their phones and then Ethan Wallace, my brother, and Rob Martland, his colleague, mixed everything together and did all the foley and music. So it’s actually all iPhone recordings for the voices, all recorded completely separately and then timed out as if they were in the same room which is often the case with animation recordings.

You’re currently working on a new project with Loran Dunn & Delaval Film – what can you tell us about this?

Loran and I have known each other for years from when we used to both be involved in the theatre. We’ve now come together to work on my new animated film Salvation Has No Name which I’m writing and directing and Loran is producing. The film, which will be Delaval Film’s first animated short, is a cinematic folktale which explores themes of xenophobia and faith. It will be my longest animated short yet at fifteen minutes and told through puppet animation.

Sadly, there is really no funding for animated shorts here in the UK.

So we’re currently in development on that and we recently won the short film pitching prize at the Visegrad Animation Forum in Czech Republic and have since been talking with companies in Europe about international co-production as, sadly, there is really no funding for animated shorts here in the UK. It’s great to be working with Delaval, who have a history of brave and challenging films, to tell this story in particular.