I’ve always had a fascination with the shooting format a director chooses for their film. At times this decision baffles me, but there are other times when the aesthetic the format allows feels essential for the success of a project. Guillermo Irriguible Loren’s short documentary Speaking in Voltages is certainly the latter.

An ode to nostalgia and the golden era of analogue instruments, shot (almost) entirely on analog format Cameras (16mm, Super8 & Hi8), it’s a film you just can’t imagine watching with a crisp digital image. Interested to hear more about the challenges and benefits in adopting a non-digital workflow, the director joins us to discuss his process and his own obsession with vintage synthesizers.

Speaking in Voltages is a very distinct and unusual film – how did you decide it would be a good story to capture in the short film format?

Besides being a filmmaker I’m also a music composer. Sometimes under professional terms, sometimes just like a hobby, a passion. I just love making music and I am deeply obsessed with synthesizers, especially vintage (80s and 70s). Like REALLY obsessed. I’m always searching the internet for new combinations, filters, techniques, etc. My girlfriend used to ask me in the past WTF I was looking at so intently on my phone. Now she knows that 95% of the time… it’s synth stuff; that’s pretty nerdy, right?

So, a couple of years ago, I just needed to buy my second big vintage synth ever, but I was not confident at all. Ebay is full of gear that says “perfect condition” and things like that, but quickly you realise that it isn’t true. These instruments require a lot of restoration processes and very professional hands to handle them. They are pretty old, older than myself most of the time. So when you buy one, you just need to know that it has definitely been serviced and fully cleaned on the insides.

After a while searching and Googling on forums, it turns to be that Maciej’s company Analogia.pl is the best vintage synth restoration shop in all of Europe, period. Also prices are way lower than crazy people on Ebay. And that’s basically it, I contacted Maciej to buy a Korg Polysix. He turned to be a very cool guy, we kinda connected and that doesn’t happen too often in my life.

So, after a pile of emails, the idea just came to me. Poland was a country that I’ve always wanted to visit but never did. My girlfriend also encouraged me to propose the project to Maciej and I did. We only had like 10 days to shoot so obviously the short length of the piece was something that was taken for granted.

You describe the film as an “Homage to analog shot on analog”, how essential to the success of the film was shooting on analog?

I think it was the main tagline and crucial in the end. I must confess that I wasn’t sure about shooting the film in 16mm at the beginning. My experience with this format was close to none, and I didn’t have the time nor the money to pay a DOP to travel with me. But then Maciej told me that his friend, namesake and band member Maciej Baczyk was also an image teacher at the university in Wroclaw. And also that the university could lend us a WWII Arri-S. So I didn’t think twice.

How could I not shoot that in a cinematically equivalent technique?

Suddenly all the pieces connected. I was going to talk about relics, precious jewels and antique techniques that existed way before the digital era. How could I not shoot that in a cinematically equivalent technique? Also I did know how to shoot in Super 8 and Hi8 so these other two formats give me a little extra space and security. 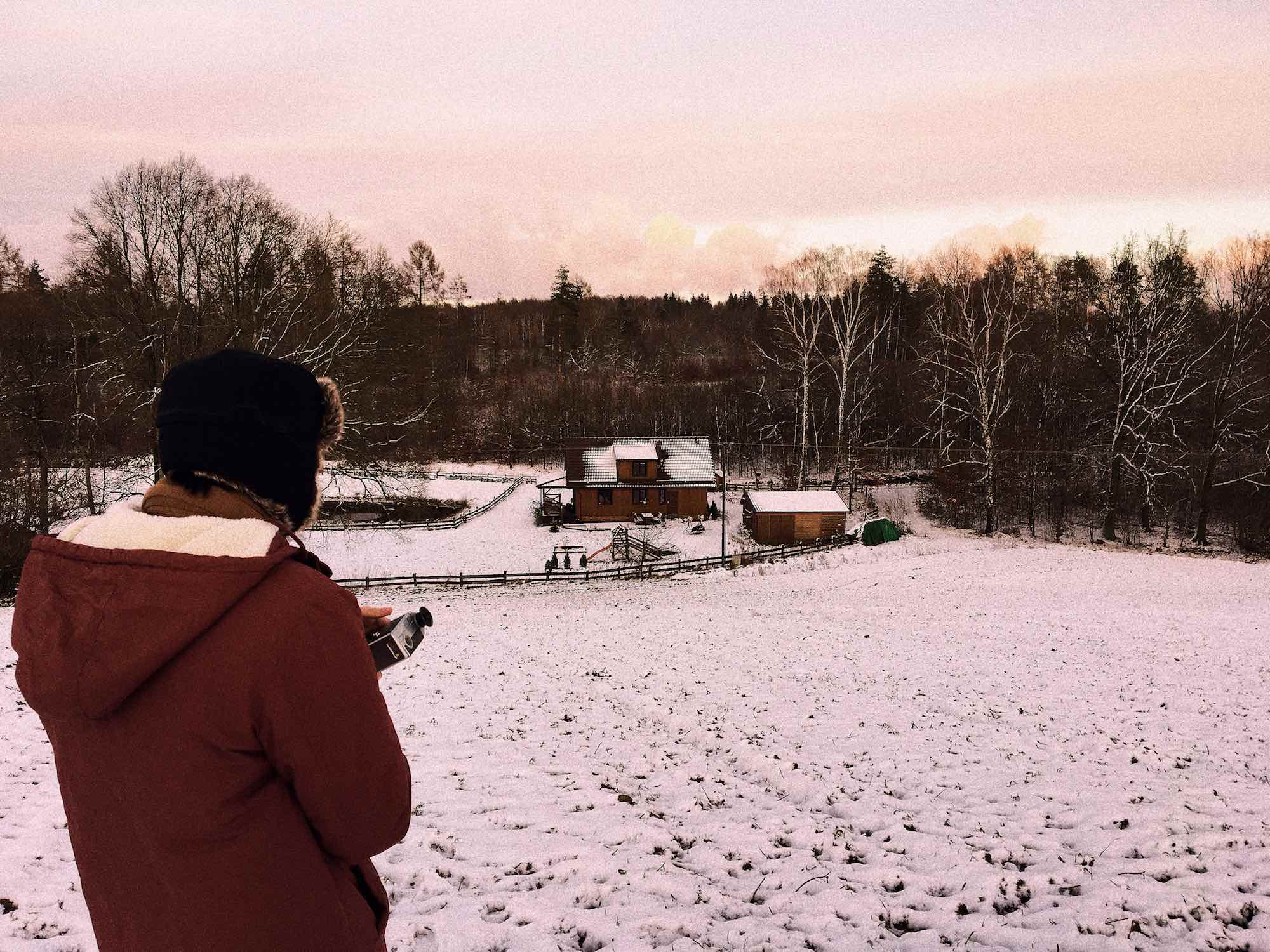 Did you ever think of shooting digital but using post to make it look analog?

That is a good question that also reveals secrets. I did take my Sony A7S with me just in case (following the warnings of my girlfriend again). And thank God I took it. If you don’t have a crew and big budget, shooting analog can be very risky. There are 4 shots in the film that were taken on the A7s which I’m not going to reveal. The editing process that I did making those few shots feel organic and real 16mm, consists of… a lot of time invested in front of the computer. Seriously, a lot of time and energy. Totally worth it by the way.

Were there any notable benefits or problems you encountered shooting on analog?

The benefits I think are pretty clear. The texture, the magic, the skin tones, the wait… until it is developed. That wait, wonderful and full of dreams. Paradoxically, I also love the unpredictability that celluloid brings, at the same time as the analog synthesizers, like it is spoken on the film.

Unfortunately there are quite a few problems too. If you are quite a perfectionist filmmaker, it is very very expensive. The films plus the developing plus the scan to digital… Crazy. But again, totally worth it.

On the other hand, to handle a camera like the Arri-S, so old and artisan, is pretty tricky. There was one day, shooting the last reel of 16mm Fuji that ‘other Maciej’ couldn’t come to the shooting. He had prepared the camera the day before for me, ready to shoot. I don’t know how but I just screwed up and shot it backwards, so the film jumped out of the interior rotary engines. Time was gold, so a 16mm newbie like me had to fix all that by myself alone. And that’s the beginning of a surrealist anecdote I want to tell.

The last reel of 16mm was inside the Arri-S, undeveloped, waiting to be shot at the very important scene of the synth workshop. I only had one chance. Other Maciej freaked out and tried to help me via phone, but that was just making me more anxious.

I had to watch that f***ing YouTube video 20 times until I could do the same shit with my eyes closed.

Then I looked up a YouTube tutorial about “How to change a 16mm film on the Arri-S”. You can search it and see what I mean. It’s freaking hard man…. mainly because you have to do it in total darkness to not burn the celluloid. So there I was, searching for a dark and quite room in an office complex in the middle of nowhere, near Gdansk (north Poland).

I decided to do it inside the toilet… the public toilet that was there. So I took my girl and put her outside the door, warning (in English) the Polish workers not to enter, random people that didn’t know what the hell was going on and why they couldn’t get in.

But I had to calm down. I had to watch that f***ing youtube video 20 times until I could do the same shit with my eyes closed. Hahaha I must looked like a weirdo trying to learn some repetitive Ninjutsu Kata or something just lying on the toilet floor. Surreal as I said. Happily I managed to do it successfully. 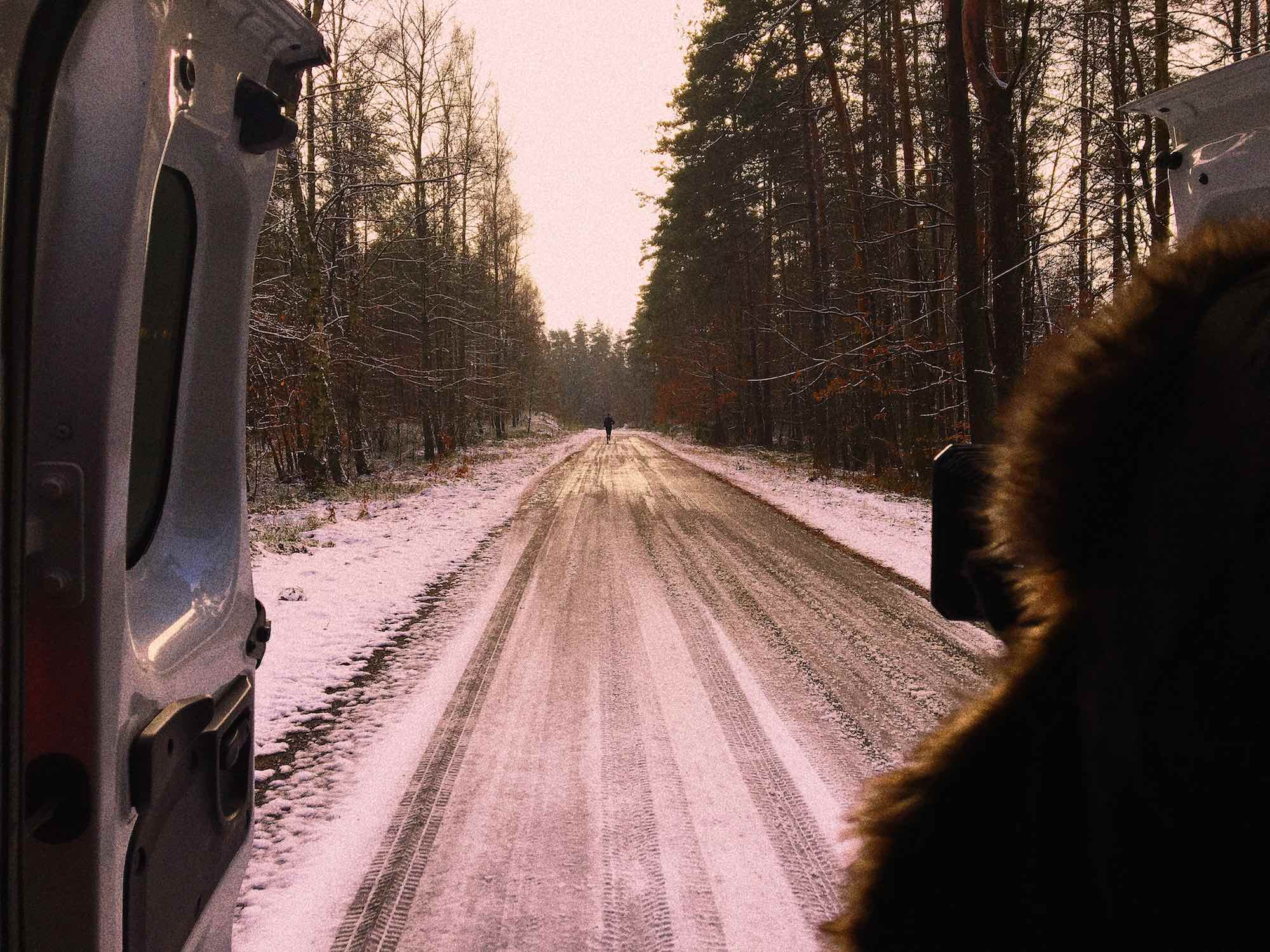 I’m editing and working with my pal and Director Enric Ribes at HÄNS, on another 16mm piece about the only black prisoner survivor in the Mauthausen concentration camp. Also I’m going to edit another analog project I directed. This one’s a music video with my music and shot entirely on Super8.