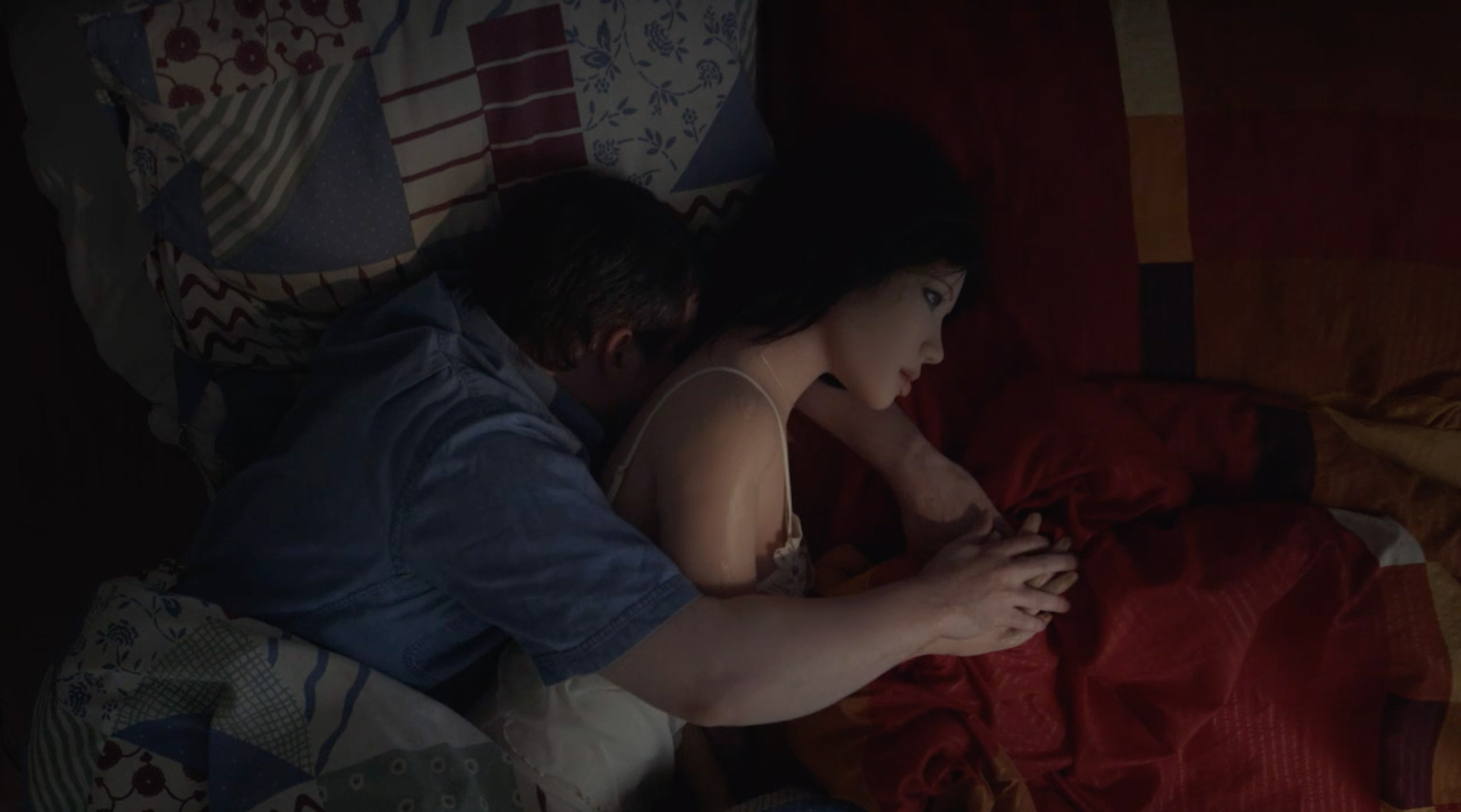 Oliver Schwarz’s Dream Girl (Traumfrau) is a tender and touching exploration of love and loneliness in modern society. The film is like nothing I have ever seen before and places the viewer in a world between imagination and reality as it explores basic human need. Oliver and I spoke about how he planned for such an observational style documentary and what the piece conveys about the nature of relationships.

What inspired you to take this topic on as a documentary?

I was studying Documentary Film at Lucerne University of Applied Sciences and Arts in Switzerland at the time and was searching for ideas for my Bachelor degree movie. My first intention was to make a movie in which a man is creating his dream girl in his imagination. At first, I thought this could be great material for another fiction film. Then, somehow, the silicon sex doll industry found me. It shocked and fascinated me at the same time. I found out these dolls can be the perfect projection objects for personal needs. And suddenly I had the brainstorm to combine the idea of imaging a dream girl with the topic of ‘real dolls’. Somehow I was convinced there was a potential to play a puzzle game with the audience.

You found Dirk on the internet, it must have been a difficult decision for him as to whether or not to take part in the project. Why do you think he agreed to the collaboration?

I had the opportunity to meet many people from these internet forums who didn’t interest me at all. Dirk was different. He is a very reflective, sensitive person. After his burnout, he just couldn’t find a way back to a healthy relationship. That’s why after a lot of contemplation, he decided to buy Jenny, for almost $10,000. He chose the type of doll, the colour of her skin, hair and eyes, the breast size and so on, the doll was produced exactly to his specifications. A life-sized silicon doll of around 42 kilograms, was then delivered in a large wooden box to his home.

I felt that Dirk had an urgent need to talk about this topic because he was aware of how many people are trying to find real intimacy with a silicone doll. He was not just talking about himself but for a whole community.

I found out these dolls can be the perfect projection objects for personal needs. 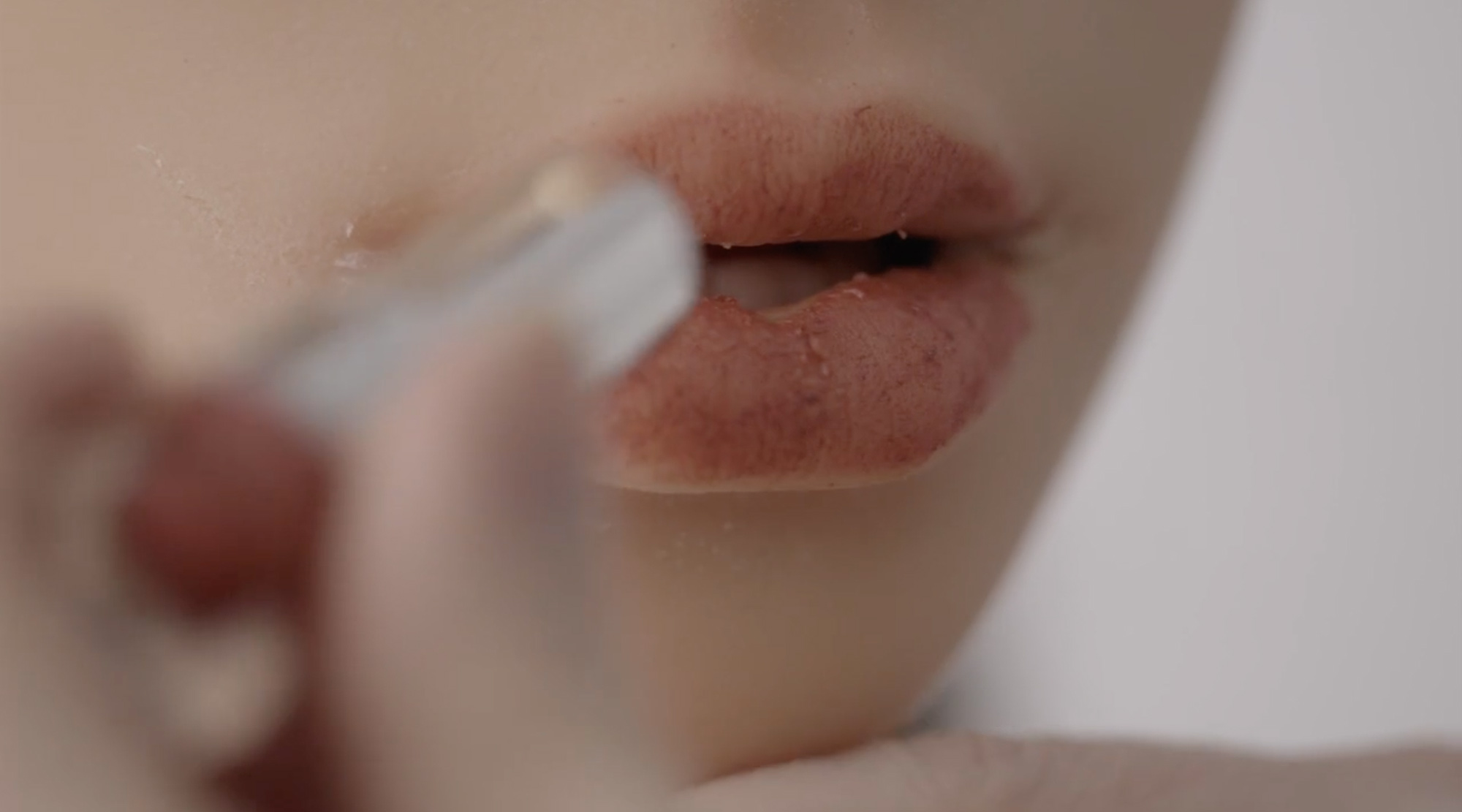 How did you get Dirk to open up so honestly about his life with Jenny when you had known him for such a short period of time?

His relationship with Jenny was only one year old when I met Dirk and this worked to my advantage as his reflections about her were spontaneous and new, even for himself. I guess you can feel this honesty in the 20-minute film. I think in the end he trusted that I never had bad intentions. It would have been easy to make a fool of him because the ‘Doll Users’ (that’s what they call themselves online) are like an anonymous community. They try to protect themselves because they are not yet accepted in society.

How did you approach the planning of the film to ensure you presented this view of Dirk and his lifestyle?

My goal was to find out something about the human basic needs behind the decision of buying a sex doll. I was interested in exploring the mechanisms of relationships and what we need to feel loved. What I found out later is that most of them buy their dolls not just for a sex object but rather unconsciously for some kind of a living being for their lack of love. That must be the reason why Dirk fell in love with Jenny at first sight. Isn’t it interesting, what our brain is capable when it comes to our survival?

What do you think the way Dirk lives says about society?

Turning a blind eye to loneliness and the feelings of separation is a capital sin for human beings and this behaviour is far too common in society and only increasing.

Alongside this, we still live in stereotypes and have ideas of how beauty should be. Deep inside of us, there is a dated image of a man who has to be strong and fearless no matter what and women have to be sexy and beautiful at all times. This image makes us sick. But fortunately, a lot is also changing in the way we perceive reality. Nowadays we have all the possibilities to build our own attitude. And our true inner-selves will manifest in the outside world sooner or later, as many scientific pieces of research confirm.

Has this project changed your outlook of Doll Users?

In the beginning, I was sceptical and even a little disgusted sometimes, but, throughout the project we became friends and I began to feel empathy for Dirk. I now have an understanding of how desperate and lonely one has to be to live this existence and how he is, by far, not the only one. 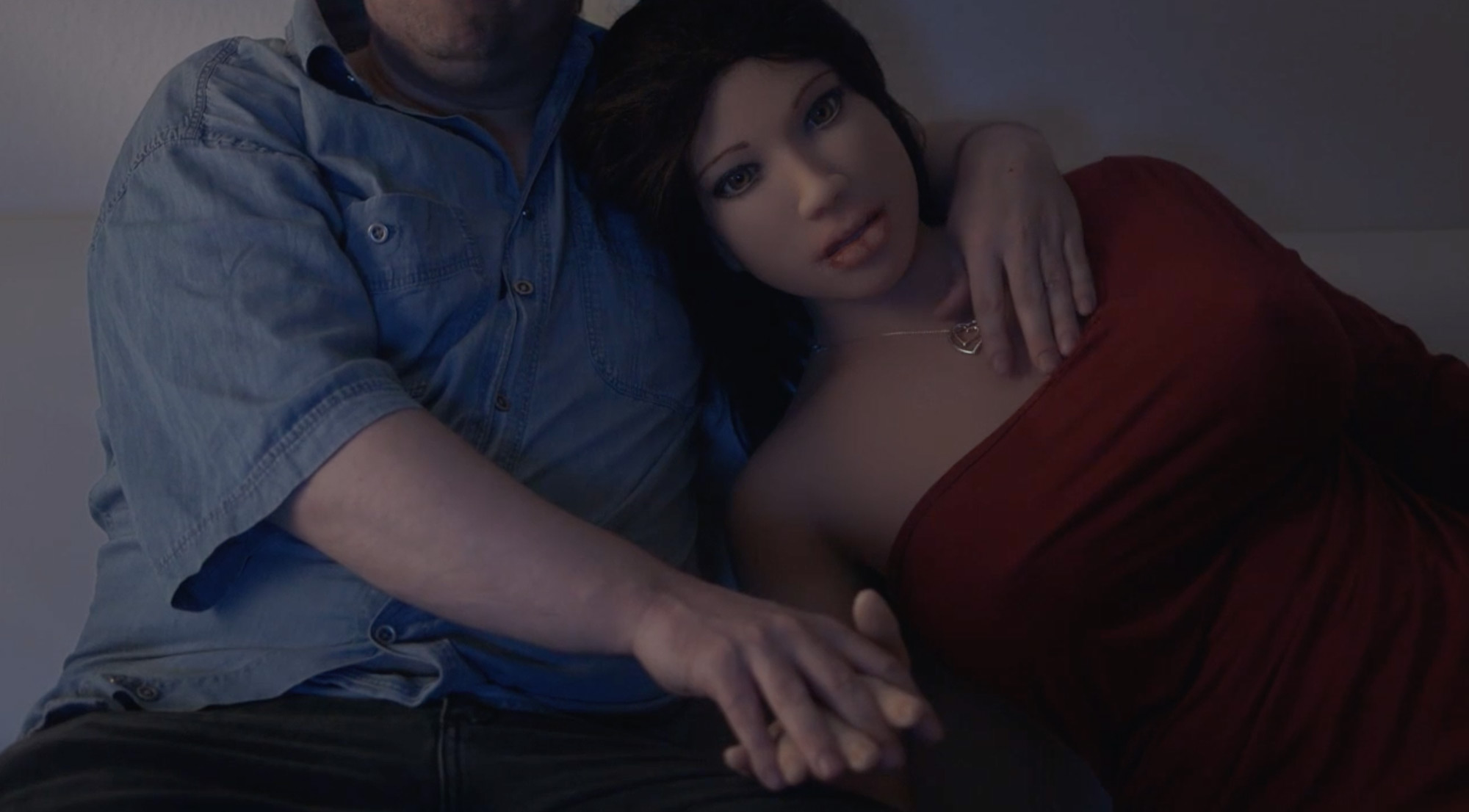 You are quoted as saying: “In all my previous relationships with women, I often wondered to what extent a relationship is the product of our imagination – what is actually real, and what do we simply project and interpret? Don’t we all live in our own personal realities?” Are you any closer to figuring this out? What have you learnt about relationships through making the film?

The question was not only meant for me but for all of us. When we dig deep down in our psyches and try to be honest with ourselves, we start to realise that many things we think we find in our partners are actually a reflection of our own projection. A love relationship can be a brutally honest mirror.

I was interested in exploring the mechanisms of relationships and what we need to feel loved.

The piece is very observant, you don’t interrupt what is being shot. What planning did you do in pre-production and how did you explain this to Dirk?

The only condition from Dirk to give me the green light for the movie was to hide his face. The cameraman and I had to find a cinematographic way to see and feel Dirk, to let him move freely but without showing his face at the same time. That was quite a challenge. We had to find a strict language and decided to make long, defined and organic shots to give Dirk the space he needed to act naturally. That’s one of the differences from working with actors. You cannot expect your subject of a documentary to play a role. They have to be themselves in front of the camera. 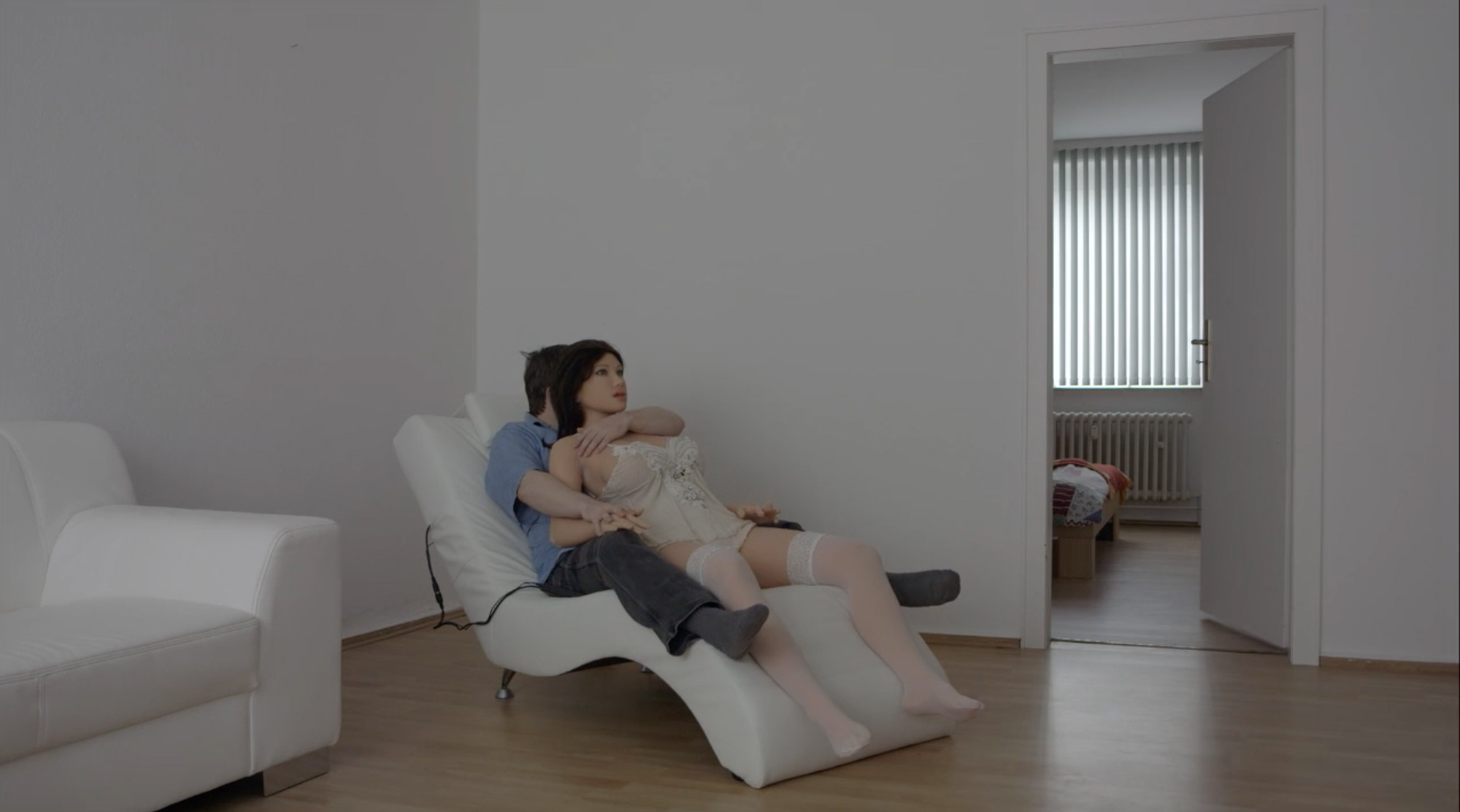 How did you capture the shots whereby Dirk and Jenny are in going to bed in the evening and waking up in the morning?

Our time and resources were limited. I talked a lot with Dirk before our shoot and he told me exactly how the strict structured daily routines between him and Jenny looked. We picked out the moments which were visually interesting for us, fitting in our dramaturgical concept and reenacted those scenes.

What were Dirk’s views on the film? Has it changed his perception of himself?

After the first rough cut, I drove from Switzerland to Germany and presented it to him. I was sitting in the middle of Dirk and Jenny on the sofa as we watched. Dirk seemed relatively relaxed and satisfied. But he told me Jenny was extremely excited inside…

I think the process of the movie helped him to deepen his reflections about himself and the mechanisms of loving a doll. But until today what exactly happens in his brain is still a mystery to him.

I like to work on a variety of different projects. My current fascinations and projects are photography as I believe the medium to be more intuitive and meditative. I find artificial intelligence fascinating and zeitgeisty. Most recently the situation of refugees bothers me a lot. It’s enriching to work with them, to learn from them and to be a part of creating a more constructive and integrative world together. Today films and images are more important than ever to wake up and to have an impact in our minds. We all can always learn from each other.

I work in a cinema in Switzerland and observe the decrease of people going to the cinema. That’s sad because watching a movie online is never the same as in a cinema. I work to encourage young people to rediscover the cinema experience again. At the same time, we cannot close our eyes from new ways of production and consumption habits. It’s getting more and more important to improve the quality of online channels for filmmakers and digital artists.