Described as “an exploration of art and the alchemy of death and rebirth through the process of tattooing,” Skulls Snakes and the Flower of Death from London creative production company Autobahn, is a viscerally lyrical trip into the alluringly dark visions etched onto skin by tattoo artist João Bosco. I spoke to Autobahn Director Pedro de la Fuente about the excitement of capturing unknown worlds and the flesh sacrifice fellow Director James Worsley made for this labour of love project.

Skulls Snakes and the Flower of Death feels more akin to an art piece than a documentary, at what point did you decide to take this more lyrical path?

We started this project wanting to create something different. We wanted to push ourselves creatively and that meant moving away from a more traditional documentary language. I mean, a lot of what we do here at Autobahn is high end documentaries for brands and although we love it we wanted to explore other paths.

João’s work had the depth we needed for the film to be more artistic. The symbolism of the world he depicts combined with the tradition and artistry from the tattoo world created the perfect blend for us to expand on and add to. And we also wanted to shoot a real snake, after all, who doesn’t? 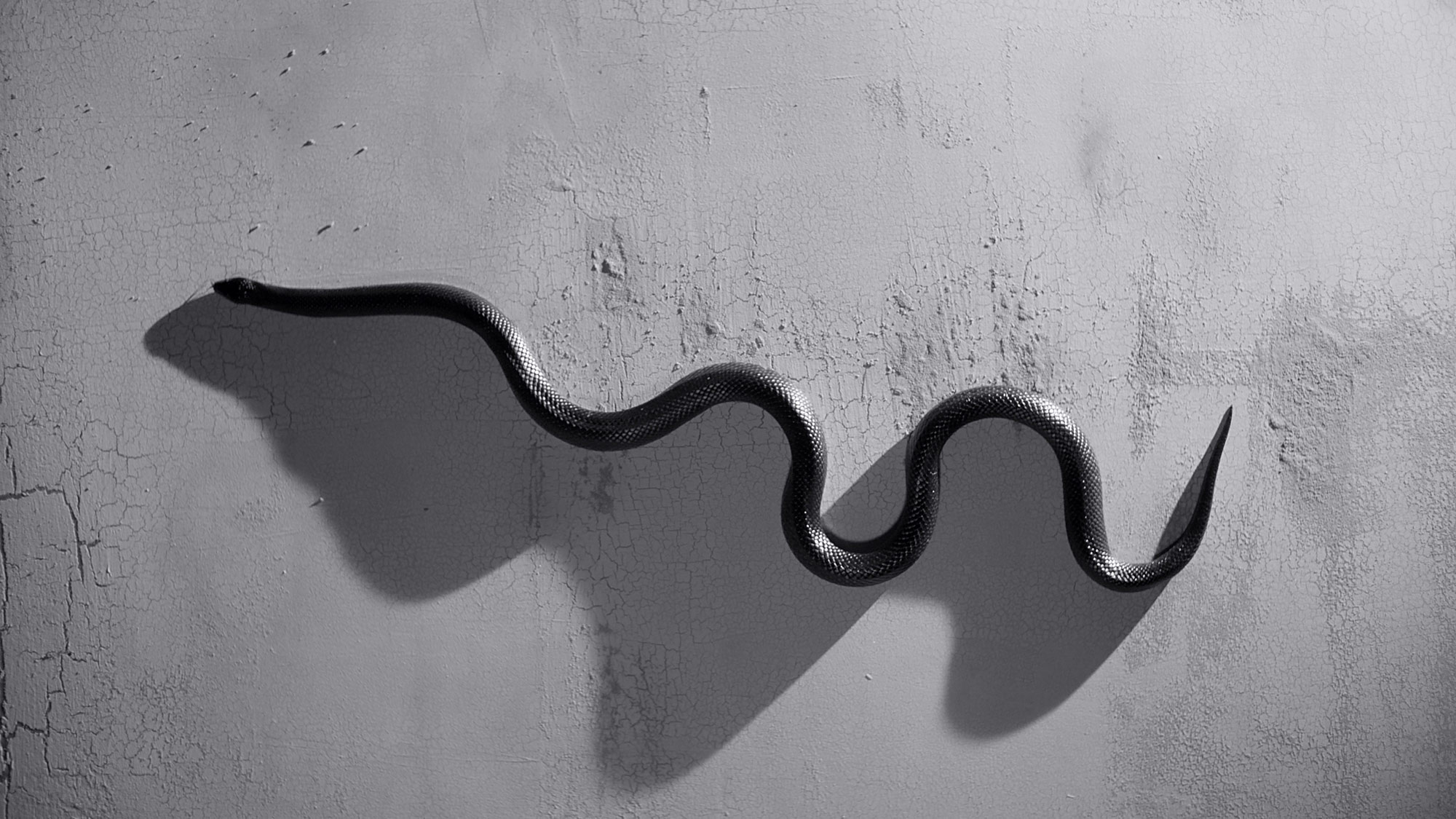 The film was initially spurred by João’s book, was there a requirement for the two projects to share a visual affinity? How did you work with João to build trust and ultimately define a visual style which would complement his work?

James and I have always been interested in the world of tattooing and years ago we started following João’s work because it’s just simply incredible. Then through mutual friends I ended up meeting the guy and because we were frequenting the same places we became friends.

It is always tricky to suggest to a friend to make a film about them. The kind of film we do requires a big commitment from our subjects and from us. We always want to take creative risks and push our subjects which means that sometimes having a friendship can make things more complicated. When you don’t know the person intimately you have a certain distance that allows you to ask difficult questions, or make delicate requests that if you did to a friend they might just say ‘fuck off’. It is a fine line of gaining trust but also having the detachment necessary to have an objective look and take the film where it needs to go. So we never actually proposed something to João, we just got our work in front of him and then one day he called.

We wanted to push ourselves creatively and that meant moving away from a more traditional documentary language.

He wanted to promote his book with a video and asked if we wanted to do it. I did suspect he had something small in mind, maybe a promo piece that showcased the physical book, so I explained to him that if we did get involved we would want to go all out. We were very straightforward and transparent with João from the beginning. There was no point for us to do something too traditional, it wouldn’t push us or allow us to experiment with new techniques and we wanted to make something dark.

This transparency and our ambition from the beginning made him understand that the film would be as much ours as it was his and that we would commit fully, if he wanted to go ahead with the project. We felt he respected that as an artist himself and handed over his ‘world’ for us to explore.

We created a treatment like we do with all our commercial projects so he could approve things and kept him involved. The goal was to make a film that promoted the book but that also could stand alone as an extension of his art independently.

There’s a power in the film’s use of contrast and black and white cinematography. Knowing that this project would be limited to a monochrome palette, what considerations did you bring to your compositions?

João’s work is mainly done in black so that made our choice to go B&W quite an easy one. His world is dark and there really isn’t room for color. So it is like we are diving into the environment of the tattoos. Like as if the black on the screen comes from the ink itself.

Luke Jacobs, the Director of Photography on the film, used contrast and a lot of shadow to create a mood. We believe that to hint at something in the shadows creates a stronger emotion than showing the object fully lit and therefore quite flat. Half of the story is in the mind of the viewer and to hide some details in the shadows allows the viewer’s mind to travel, to imagine the rest of the world. Luke used that concept a lot and also created a bed of darkness where he could use pools of light to highlight the tattoos.

In mine and James’ work we always use a lot of symmetrical images and considered camera movement. It is like a subtle dance of the camera, slow, almost imperceptible at times and that builds tension, which in this project worked perfectly.

You and James wrote an original poem the narration of which anchors the film. Did those prose function as a traditional script, shaping the images to come or did you take a more fluid approach to its construction?

It was a bit of both. We knew a few shots we wanted to get but the poem also had to flow so it was a matter of writing and than tweaking it based on what we wanted the visuals to be. Originally the poem was much longer but we felt that half of the poetry was in the images so since we needed to make space for that we cut a few parts of the poem out. We were still making amends to the poem in the editing suite in order to really connect it to the images.

In João’s book he talks about the symbolisms of the Skull, Snake and the Flower, how these elements appear throughout history in religion, cults and legends. This was our main inspiration as we felt it was important to develop these concepts in a lyrical and rhythmic poem.

Could you explain how the production used models as well as VFX to augment the captured footage? What was your gear set up?

There isn’t actually any VFX in the film. Well, to be totally honest the only VFX is in the shot of the skull coming out of the back liquid, but it isn’t 3D, the skull and the black liquid are real, we just had our great friend Andre Bitencourt and the guys at The Mill clean it up in places. They also removed a couple of blemishes on some of the guys’ skin but I won’t say who and where as they are already revealing way too much of themselves in the film.

We also hooked up with a fantastic model maker who specialises in skulls, it was really important for the film to have skulls that looked real, and we weren’t prepared to dig up any graves. The film was shot on the Alexa mini with anamorphic lenses. All the camera movements and positions were very considered so we used a combination of fixed overhead shots, movi and tripod.

So I have to ask you about creating those wince-inducing slow motion tattooing shots, who was the brave soul being worked on?

I love those shots too, it is so visceral and shows perhaps the true violent nature of tattooing. We wanted to bring to someone that has never had a tattoo done the excruciating pain of getting one done. Sure, some people would tell you it doesn’t hurt, but whether you are tough or you flinch even at the thought of having a needle draw on your skin, when you are at the table time slows down and you feel every little prick and vibration from the gun. The shots are quite graphic but that was the intention. 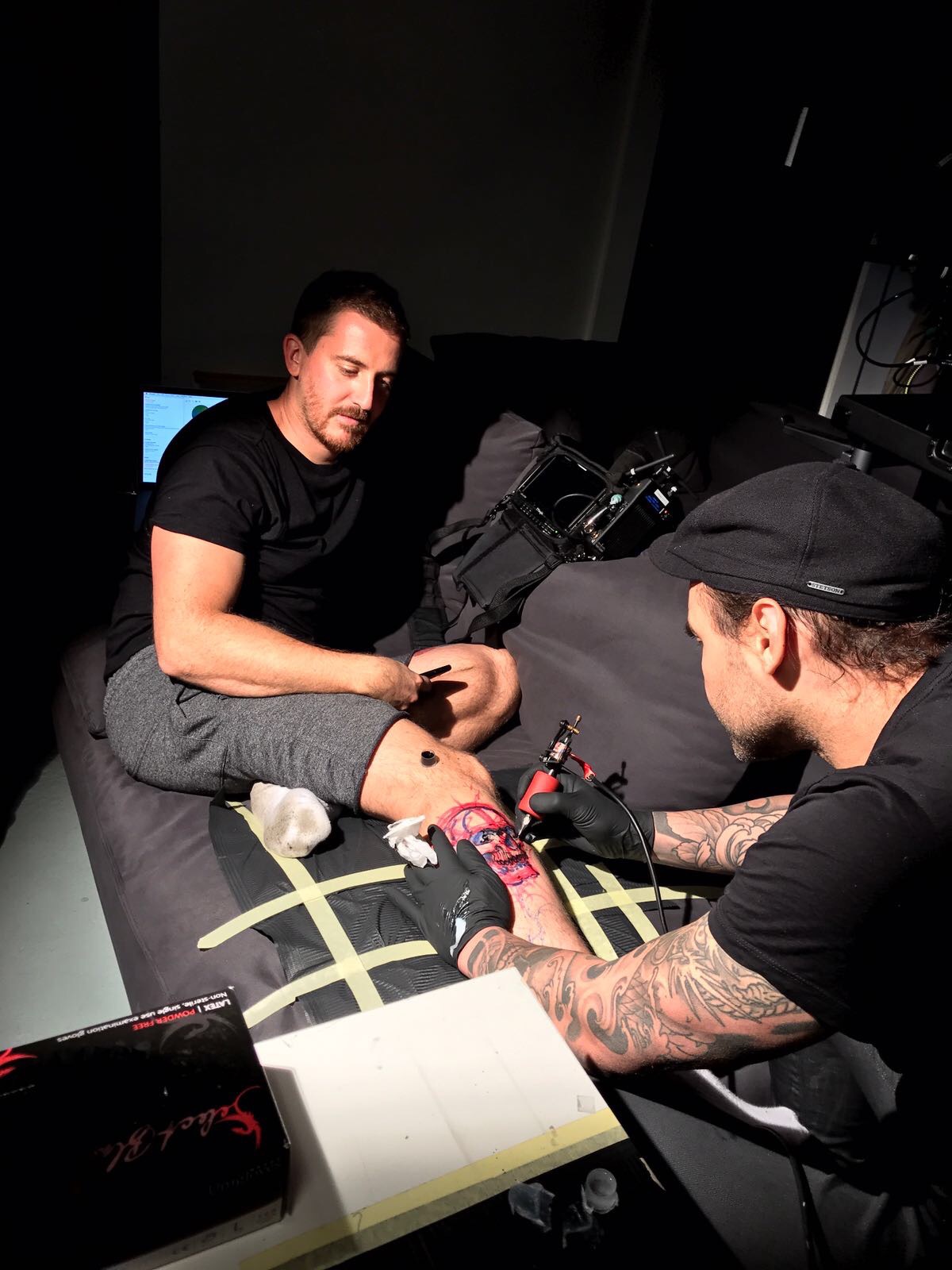 We wanted to bring to someone that has never had a tattoo done the excruciating pain of getting one done.

We had a friend booked to come into the studio to get tattooed but the night before he pulled out which got James and I having to decide between us who was going to jump in and save the day. To be fair, James and I have quite a few tattoos and João’s style really resonates with the both of us. James wanted a new tattoo so he went for it. That’s what I call commitment.

What unknown worlds will you be opening a door to next?

If we knew things would be much easier. We have a ton of ideas for our next films and some are already under way. It is always a process that starts with our team doing research, then us trying to involve ourselves in the scene and look for a character or story. Throughout this process we start realizing whether there is a story there or not. In the films we make the character and their story is key, it is what drives the narrative forward and a lot of the times the amazing thing they do is just a cool embellishment in the background.

This is quite apparent on our film Globe of Death which tells the story of a daredevil motorcycle rider that rides his bike in a metal mesh globe in the circus. His personal story is just great and then it happens that he rides a bike upside down in the globe with his mates. But that’s another story that we can talk about next time perhaps…