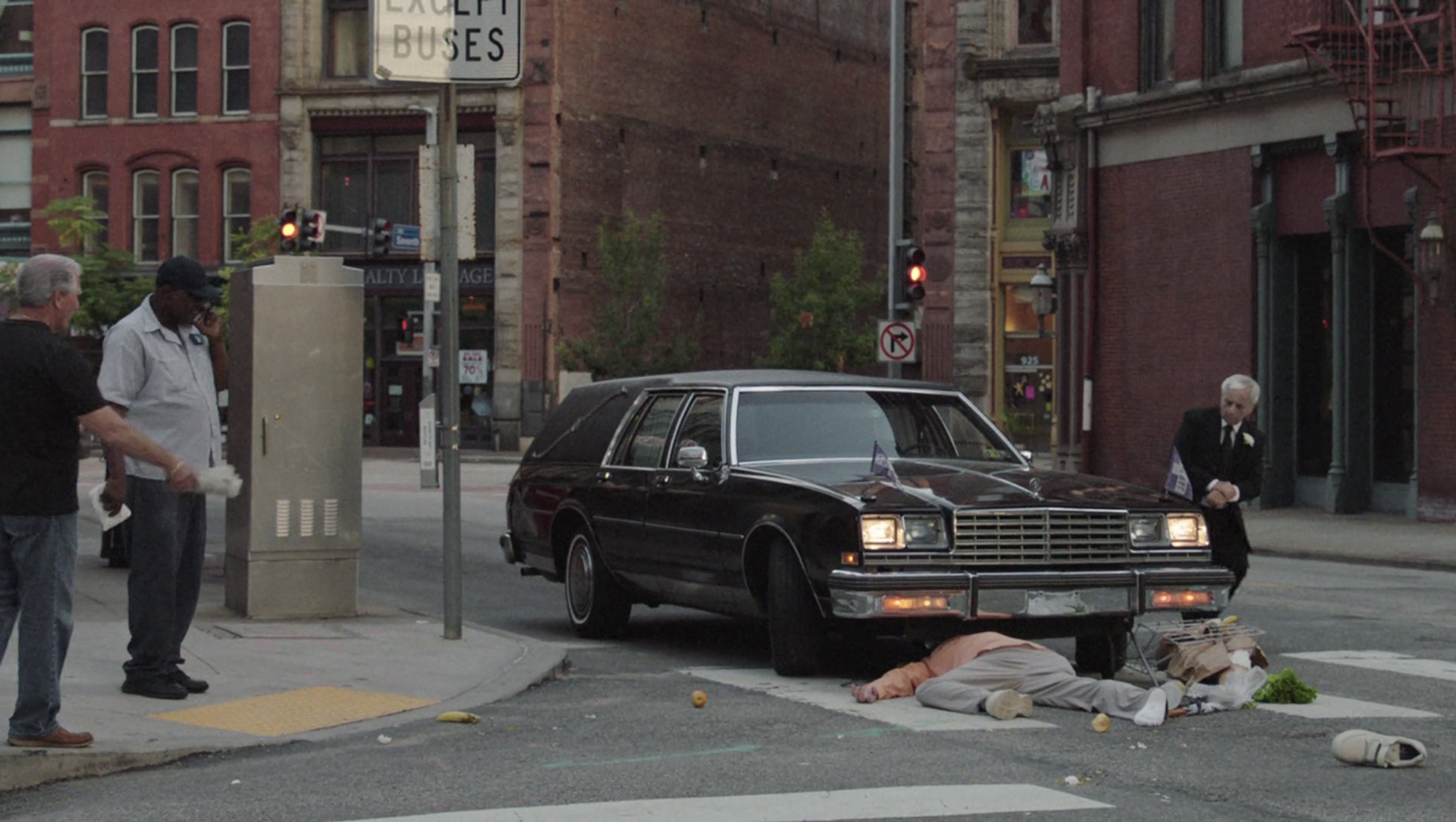 Within its brief 3 minutes, it can be easy to miss the subtleties of Amy Nicholson’s Irony. So, before you go any further, it’s highly recommended that you give it more than a single watch. I won’t spoil anything but what works here is the eclecticism of all the moments and each small hilarity they breathe into the overarching seemingly commonplace. It’s a wonderful short and I was fortunate to speak to Amy following Irony’s Vimeo Staff Pick Premiere online debut.

Where did the idea for Irony come from?

I’ve lived in New York for many years, and I’m an obsessive people-watcher. Over the years I have often chuckled at some of the ridiculous situations and juxtapositions I’ve witnessed, most of which were ironic. I have a whole list of the ludicrous vehicles that have almost mowed me down on my bike: traffic cops, ambulances, even a truck full of port-o-potties. These things served as inspiration for a series of short scenes. I started to craft them into scenarios, and they began to pile up. Supply & Demand thought they would make a great short, so I glued them together. I’ve made several documentaries and love working with real people, but I also love comedy. This was an amazing opportunity to work with actors and create humor that’s rooted in reality, my favorite kind.

We had very few extras to work with and were shooting in places like Times Square with a zillion people – now that’s ironic.

Could you talk about the practicalities of shooting something so eclectic in its environments and cast?

Well, I can not take any credit for pulling it off. I had a very supportive producer, production manager & crew and the casting agents found me wonderful actors. Shooting street scenes where you are dealing with crowds and weather conditions with no lighting package and keeping the crew small enough to sneak down into the subway was not easy. What made it work was that everyone was into it and everyone appreciated the kind of humor we were aiming for. The cast and crew had fun even though the conditions were pretty challenging at times. We had very few extras to work with and were shooting in places like Times Square with a zillion people – now that’s ironic. Our fantastic production manager even played the dead guy under the hearse. Apparently, the accident looked so realistic that several people called the police thinking some poor guy had really been run over. That scene was shot in Pittsburgh along with the chatty girl and the smoker. The rest were shot in Manhattan over the course of two pretty crazy days. 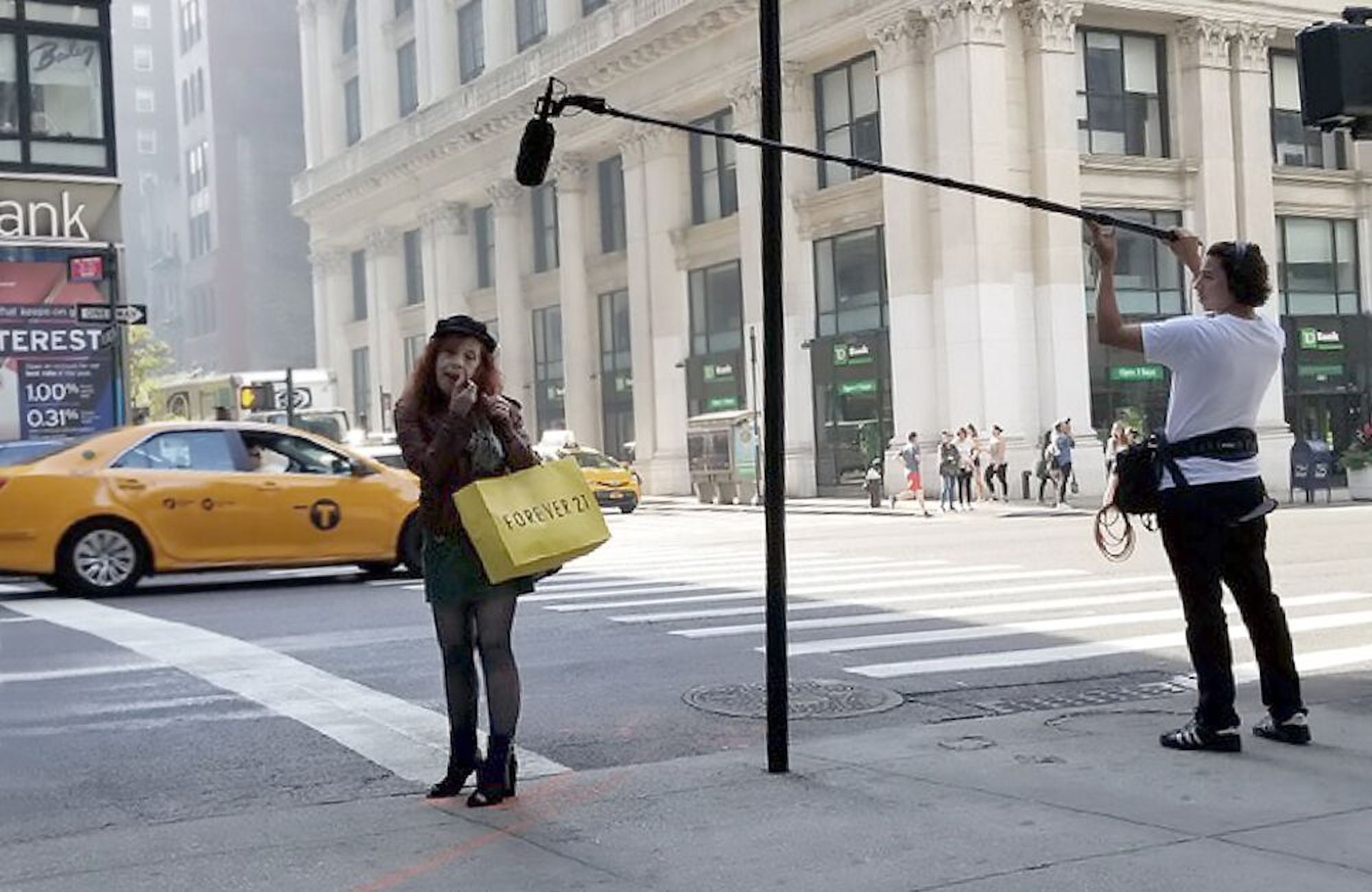 How did you go about structuring Irony, was that a process that came with the writing or was it conceived in the edit?

I had a lot of scenes to choose from in my pile, but some fell by the wayside for production reasons. Once we settled on which ones we could pull off, the structure started to gel. The scenes had to flow from one to the next, so I worked with our DP Billy Pena to come up with transitions. We spent a lot of time making sure we had that coverage so we had options in post. Our Editor John Young played with the order a bit in the edit, but everything was fairly planned out before the shoot. Even the opening, which is just a VO under the title, was treated like a scene. I actually recorded real flight attendants reading the announcement before we cast a voiceover so we could factor in that pacing.

Now that Irony is out in the world as a Vimeo Staff Pick Premiere, what have been your favorite responses to it so far?

Having it get to 150,000 views in a week was the best response I could have wished for. When people tell me they’ve watched it several times, it makes me so happy because I know they appreciate the subtleties that we all worked so hard to create. But I think the best comment someone left on Vimeo was “0% suck.” Hilarious.

Well, I am hoping to be extremely busy making commercials, but I always have personal projects simmering. I have another short film idea involving yard statuary that is kind of a hybrid documentary/social experiment. And a feature project that will require me to live in a trailer park for the summer. I wish I was kidding.