Matt Genesis Stares Into the Face of an America Divided by Race, Hypocrisy & Wealth Disparity in ‘Empty’

Fully confronting the incendiary areas of race relations, wealth disparity and hypocrisy which continue to be so divisive in modern America, Director Matt Genesis’ Empty music video for Minnesota hip-hop outfit The Activists, unflinchingly depicts the tragic outcome of what should have been a routine traffic stop and the creepy hedonism behind the gilded doors of a wealthy man’s home. We caught up with Matt to find out how this powerfully confrontational concept came into being.

A heads up, there are a few NSFW moments in here.

What’s your typical process for coming up with the concept for a new music video commission?

For music videos, my process starts by listening to the song and analyzing the lyrics. While listening to the song, I look for flashes of visuals that come to my mind’s eye. I do this without structure or any agenda to start. In my opinion, it allows my intuition and subconscious to get a word in edgewise before my intellectual side begins to over analyze. After I note what I have seen, I begin to make connections and settle on a theme.

How did the themes you pulled from Empty’s lyrics translate visually?

Clearly, the message of the song is very political and speaks about race in particular. This brought a lot of themes to mind – most of which revolved around the conversation between the Black Lives Matter movement and the majority white population of America. Given our current political climate, I felt like this was a story that needed to be expressed.

The use of two different voices in the song inspired the idea of featuring two contrasting perspectives. One, a young black male in America. Second, a wealthy white family. I felt as though it was important to allow the visuals to represent the core feeling of each perspective while not getting tied down into a linear narrative. My intention was that this approach would create scenes that represented each perspective as a whole and not just a particular character’s experience. It also allowed for a more visceral and surreal approach to the scenes – which is a lot of fun.

Given our current political climate, I felt like this was a story that needed to be expressed.

I decided to feature the young black man waking up inside a body bag to visually represent the pure terror and injustice that Black America faces today, especially in regards to the recent rise in awareness around police shootings. The idea was to feature this scene, via my interpretation, through the lens of Black America’s perspective on the issue. I wanted to portray a sense of abandonment, fear, and eventual rage towards the circumstance – all the while feeling like there is no escape from the present. The repeated use of the double dolly technique represents the idea that Black America has not been in control of their own destiny. From being forcibly brought to America and put into slavery to white politicians holding the keys to their equality, Black America has been at the mercy of others in regards to their freedom.

The scenes with the white family become much more nuanced. I wanted to express two perspectives at once during these scenes. One, the left-leaning view of White America. Two, the right-leaning frustration with the idea of ‘white guilt’. I have personally noticed a drastic amount of tribalism and virtue signaling happening in political dialogue from both sides. In my opinion, this creates an echo chamber that only allows people to express certain talking points and demonizes any other perspectives. I felt as though it was important for me to subtly paint this idea into the scenes with the white family via contrast.

For instance, there is a scene where the white father is expressing his arguably left-leaning views on minorities while cheating on his wife. This contrast represents White America’s hypocrisy of expressing virtuous ‘talking points’ while living a life ridden with consumerism, hedonism, and ignorance. On the other hand, the family is overtly portrayed as an arguably right-leaning example of White privilege. The masks represent White America’s willing ignorance to problems outside of their own experience. They also represent the inheritance of the previous generation’s faults, wealth, and culture.

Were there any concerns about the use of such strong confrontational images in the video?

Because of the additional funding being provided by production, we made an agreement with The Activists that I would have full creative control and final cut – a freedom I was extremely excited about. The Activists had a budget of $1500, a small drop in the well if you’ve ever tried to create a video. I spoke with my good friend and DP Marcus Taplin. We both loved the track and decided it was worth the investment of our time and resources to make it happen.

Did the tight budget mean you had to call in favours to gather everything/one you needed for production?

Marcus owns an Arri Amira so that wasn’t a huge favor since he wanted to do the project as well. The lenses and camera accessories (Leica R, a dolly & Movi) were provided at a discount by a local rental house we work with regularly: Cine Mechanics. We also had the grip truck and lighting provided at a discount.

The biggest favor called in was that all of our crew worked for free. We had an eight-person crew I believe – not including actors. Luckily, the artists work as actors as well, they provided the talent – which worked for free. The total cost would have been in the 10-15k range just for the shoot day with the crew and equipment we had. All in, I believe we spent somewhere around 3k. We shot the whole thing in a day and a half with post production taking 1 week. It was quite the scrappy endeavor. 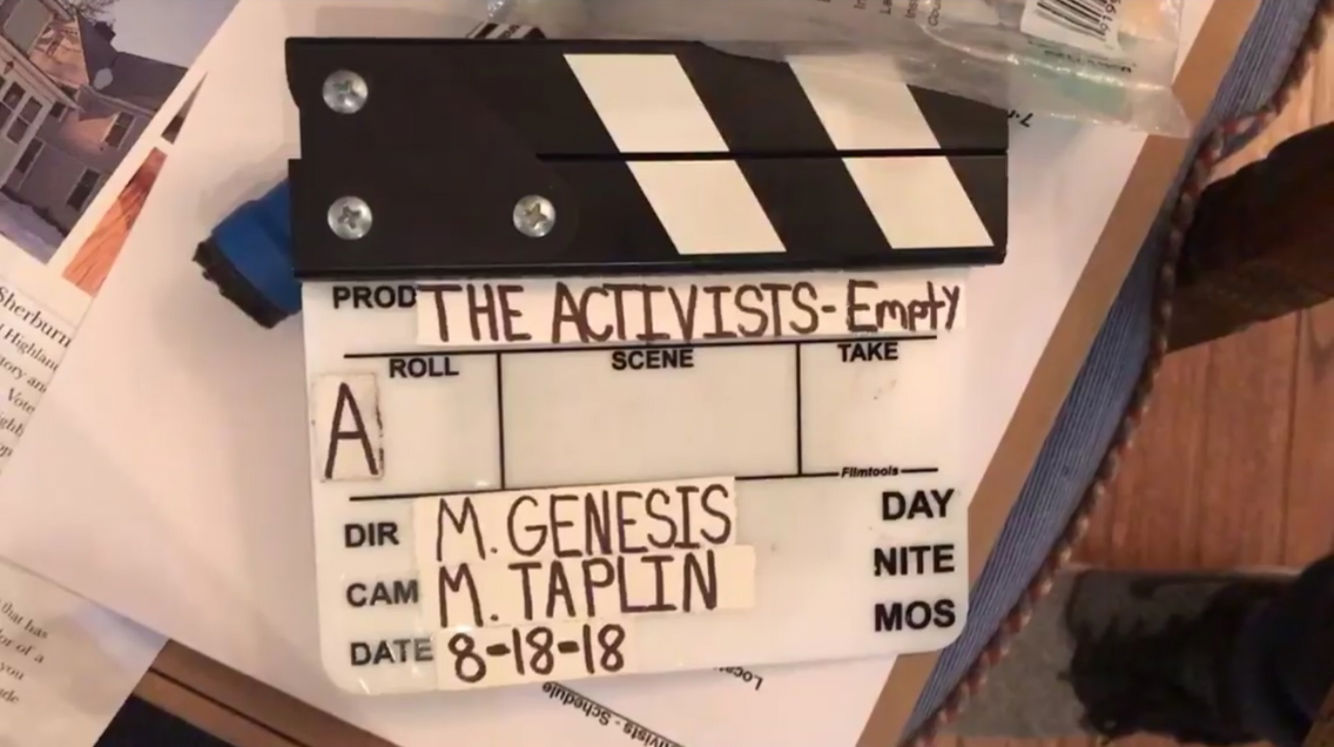 We made an agreement with The Activists that I would have full creative control and final cut – a freedom I was extremely excited about.

Are there particular conversations you hope the video will spark within and between white and black American communities?

I don’t have specific conversations in mind. I think the ideal outcome would be that viewers can see the issues we face from both perspectives. I hope that the video will prompt polar viewpoints that are met with empathy and a willingness to understand each perspective, even if you don’t agree with it at first. The moment you truly put yourself in someone else’s shoes, you can start to see that their motivation for certain dialogue and action is very similar to your own.

My main goal is to work towards directing feature films. I am currently directing commercials more than anything but I have a short film we will be shooting in January called Merger. While I’ll have some commercial projects releasing in the interim, this is the project I am most excited about. We gathered funding from investors as well as had a successful Kickstarter campaign.